I’ve used them. They do have a significantly larger opening. If thermostats are your flow choke point then they would be helpful. Difficult to test. Good quality t-stats.

Motorad yes, as shown in pictures. These work well. Not sure if they are the ‘high flow’ version however.

As you say this is difficult to test… did you notice any difference yourself ?

Looks like you have a standard thermostat. Here’s a picture of standard waxstat vs high flow motorad: 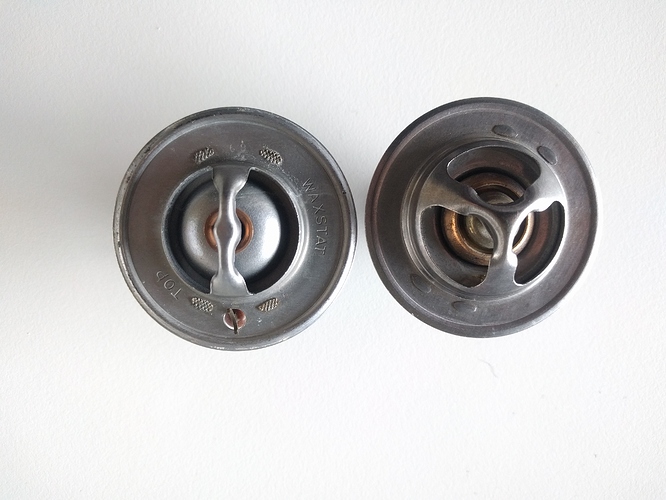 Are they “double action” stats with the blocking plate? you got a side view and part number?

Yes these are direct fit. With a blocking plate and jiggle pin as original. I will post more pictures an part number a bit later as I don’t have them with me now.
I’m pretty sure that cooling system with capacity of 20liters should benefit from higher flow thermostats 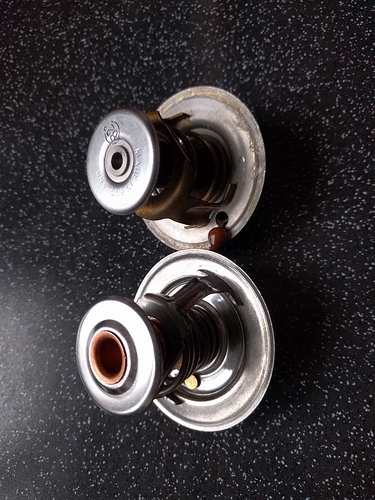 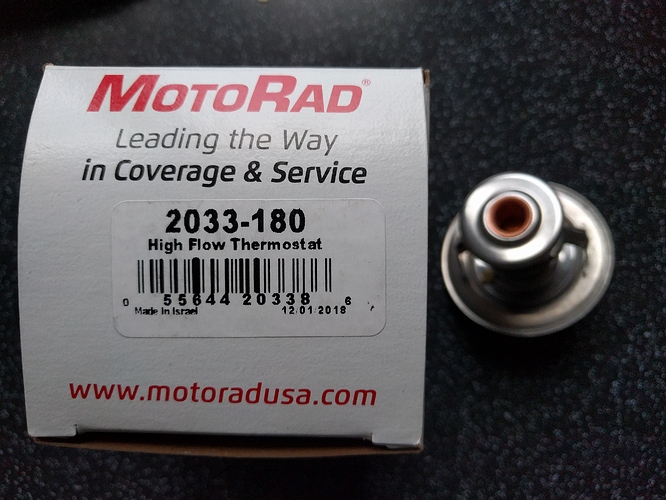 i bought the standard Motorads. The high flow may be better, but you’ll need to drill a hole in them, no jiggle pin.

No need to drill anything, they do have a jiggle pin

I think you will have plenty of heat with 180 thermostats all year round. 190 thermostats is more emissions thing.

No need to drill anything, they do have a jiggle pin

I don’t see a jiggle pin in the photo.

I went to their web site it does have a hole on the inner rim that looks like it’s under the main plate, with the stat closed it might be closed!

It is a bit hidden but it is there. Due to bigger outlet it is located on the valve: 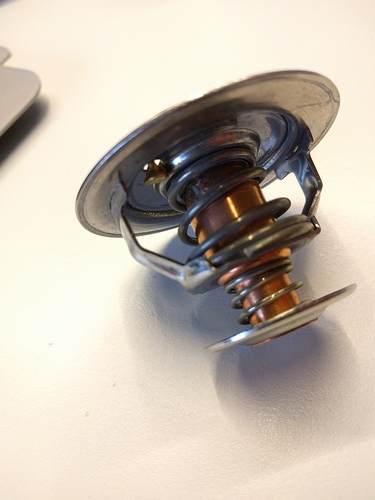 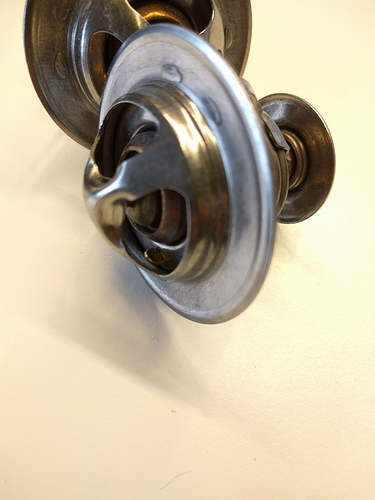 This is a bit a red herring. The amount of water flow and thus the amount of cooling capability will be dictated by the rate of flow from the water pump which is rpm dependent.

All that will happen with a wider ported thermostat is that it will close itself up to match the other thermostat or it will belatedly equilibrate at a slightly different temperature. This is because neither the amount of heat being generated by the engine, nor the heat dissipation capability of the radiator have been altered. All that has happened is the rate of flow through the wider port will have slowed down a bit, making the thermostat change its average position to a different time constant to before.

The thermostat only sets a floor on the temperature when it is forced shut by the radiator - it doesn’t control the temperature - that is just the equilibrium point reached when engine heat production equals radiator heat dissipation for a given flow rate.

Given that a couple of years ago, you were all raving about the Lutz modification, it makes no sense to get excited about this.

As you say this is difficult to test… did you notice any difference yourself ?

None. They opened and closed. Functioned for 1 year before B bank stuck open 4mm. Swapped both to waxstats. No difference except for the spec’d Temps.

Given that a couple of years ago, you were all raving about the Lutz modification, it makes no sense to get excited about this.

I wasn’t around then. I get the Lutz mod. That is to say I understand the problem it’s adressing, inadequate coolant flow in the rear of the heads due to a shortcut out the front ports. But its solution doesn’t seem ideal. Nor does there seem to be a plainly demonstrable problem with un-lutzd cars. Has anyone fired up a V12 with a water rail removed to see what sprays out from where and how far? I assume so, and that flow could be better from the rear ports or this wouldn’t even be a thing.

[quote=“Jaguarrr, post:17, topic:374459”]
I get the Lutz mod… But its solution doesn’t seem ideal. Nor does there seem to be a plainly demonstrable problem with un-lutzd cars.[/quote]

I agree, the Lutz mod might be a solution in search of a problem. There are, however, two schools of thought on why it might be worthwhile:

Just got mine, stock stat is 1 2/32 and the Motorads are 1 8/32 orifice, I am just wondering if any one has done a 180 to 195 comparison on the road with no other changes?
Also here is a hypothetical brain teaser, with the Faster Jag single point intake on the right upper rad cross flow to the left lower out flow to the pump would having a 180 on the left and a 192 on the right get more flow through the rear B bank with all the coolent going to the radiator on the right?

Thermostats don’t impact the flow rate through the banks.