Over the past several years my work on restoring my 1957 MK VIII slowed to a trickle and then stopped while I attended to our other five Jaguars.
With the current pandemic I decided to turn lemons into lemonade and take advantage of my isolation at home to get things going again on restoring this beautiful car. The first picture shows what the car looked like in 2005 when it arrived at my house, the second picture shows how it looked in 2012 after the repaint and a lot of work, and the third picture shows the truck from the machine shop driving away yesterday with the original block, original head, and hundreds of engine parts from the original engine and some of my spare engines to be rebuilt. I recently restored and sold my two Series III XJ6s and with the freed up space in my garage and the funds from the sale of those two cars I am getting back to working on my 1957 MK VIII. I plan to spend a lot of time in self isolation out on my garage to make as much progress as I can on completing the restoration of the car. That way when the engine returns I will be a long way towards driving this car. The prior owner parked it in 1975 and I think that after 45 years it should be back on the road again in 2020. 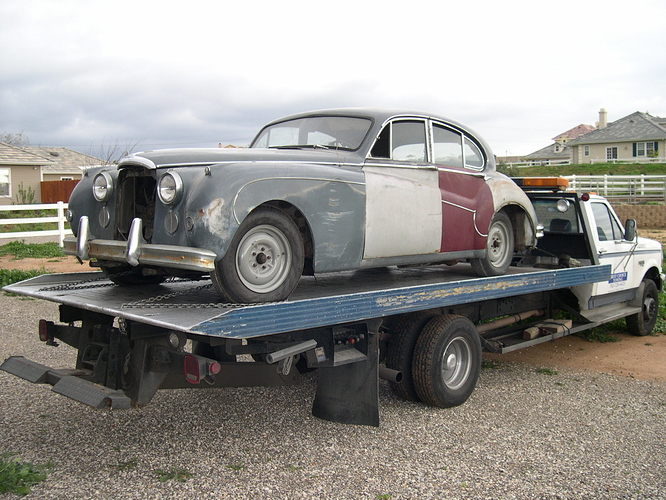 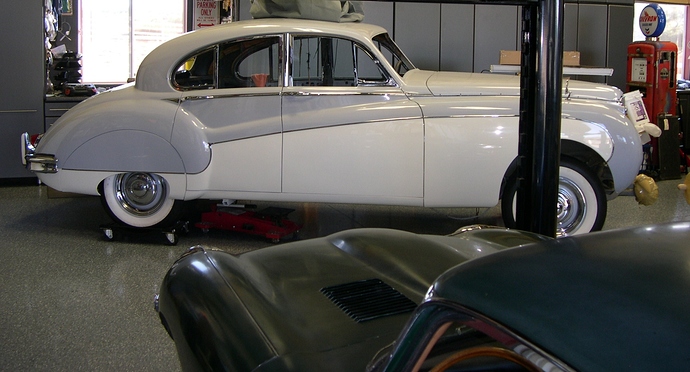 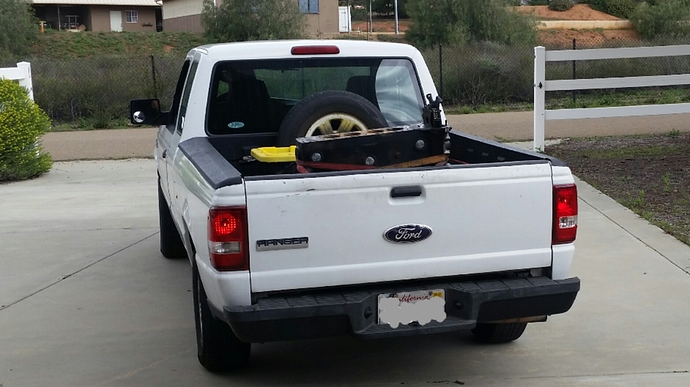 Looking forward to your usual excellent descriptions of progress.

Motivational !!
Like you, I’m spending time during telework breaks to go down into the shop and do some restoration work.

Hi Paul,
Great to hear are working on your car once again! I had my 59 MK IX out over the weekend and will be using it regularly now that our winter is over. Looks amazingly like yours! 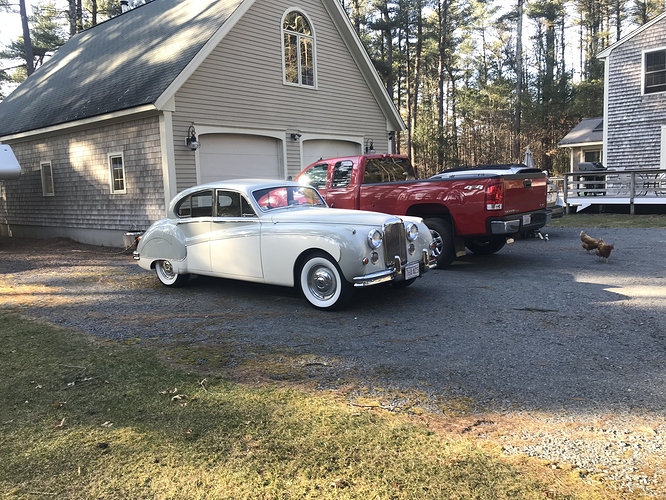 Tom,
Thank you for your reply. I hope you and your family are well.

You and your MKIX were inspirations to me several years ago when I was deciding on a repaint scheme for my MK VIII. Thank you for your hospitality and the ride in your MKIX when my wife and I were in your area. It is amazing how quickly time has passed.

I have been lurking on the Saloons list but spending most of my time on the XJ-S and XJ lists while repairing and restoring our XJ-S convertible and two XJ6s. Now that I sold the two XJ6s and sorted out our XJ-S I plan to spend more time on this list as I awaken my MK VIII from it’s 45 year slumber.

I am having garage envy…

Dave,
We moved out to a rural area about 15 years ago as my Jaguar hobby was blossoming. At one point I had six Jaguars and one Jaguar parts car, so I needed a lot of woork room, storage space, and lifts. I do most of the work (except for body work) so it is primarily a working garage, but it is equipped with couches, posters, art work, trophy cases, etc. I spend 5 hours or more out here most days. Two pictures are attached to give you a feel for how very fortunate I am. 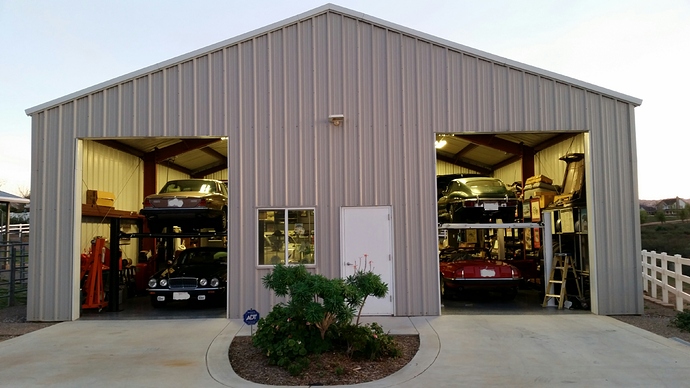 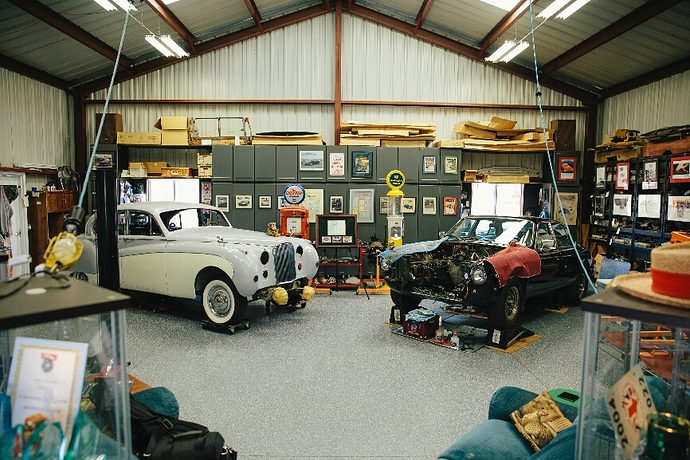 We host neighborhood and local Jaguar club parties out in the garage and share the experience with others when we can.

How do you heat it…presuming you NEED heat?

My chin just hit my desk! Why only five hours a day Paul? I’d live in the garage and visit the house!

Paul,
I do not heat or cool the garage. The cost to insulate the entire building, upgrade the electrical service, and install the HVAC equipment would have broken the garage budget drastically. I am fortunate to live in southern California where the temperatures are mild and so it is possible to be out in my garage most days and some evenings. If it gets too hot or too cold I head onto the house. The large doors help with cooling on hot days but not when we experience temperatures in excess of 110F. I can handle cold temperatures out here down into the mid 40s F, but below that I head into the house.

Phil,
5 hours a day is probably a good average for how much time I spend out in my garage each day over the long run. But while I am working on a big project like an engine replacement I have spent 12 hours or more a day out here easily.
I have been spending a lot of time out on my garage lately in self isolation due to the pandemic and I will probably continue that for the forseable future. I have lots of projects to catch up on and want to be as productive as I can at this time while avoiding getting sick myself.

but not when we experience temperatures in excess of 110F.

Ah, memories: the time when I visited @MichaelPMoore at Morgan Hill, I think in late summer, and @Ray_Livingston and I were in his OTS, and it was 115F! 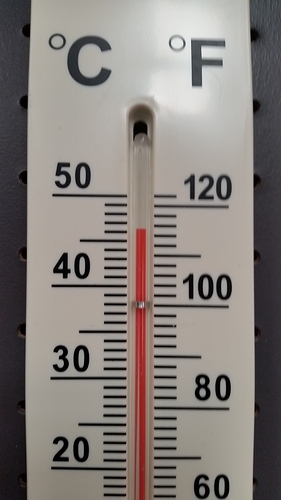 While I generally disdain the dull colours that Jag uses I REALLY like that combination! does anyone know of someone that wants a MK VIII, My car was sold to a fellow that died and the body shop that had just repainted in the colour it had been in the cinema VIRTEGO by Hitchcock THEN ripped out the goo original leather and wilton carpets etc. He’s used to hacking 51 chevvys and such so was completely unaware of it’s value. I may be able to get it back if someone is interested.

Can anyone identify what year this intake was a standard? 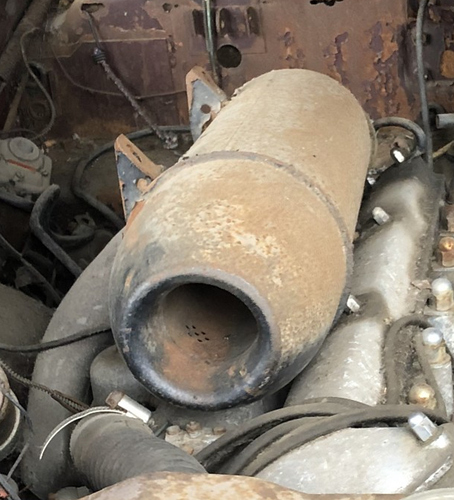 Pete,
According to the MK VIII Parts Catalogue for my 1957 MK VII that is the “Air Cleaner and Silencer Assembly (Vokes D59182)”, Jaguar part number C12496. It was on my 1957 MK VIII when I got it, but there are no VIN or engine effectivity numbers shown in my Parts Catalogue so I have no idea what other years it might have been used on or if it was used on the MK VII or MK IX.

Hi Pete and Paul,
A version of it was used on MK VII, VIIM, VIII, and IX. They all pretty much look the same but there are subtle differences between the mounting brackets on them. The early MK VII’s with an A head use a different intake manifold than the later ones, and the MK IX with B head has totally different hole locations on the mounts.

As an aside, two other style air filters were used on the big Marks throughout the years, an upright oil bath air cleaner (much like its American counterpart) and a large horizontal round type shared with the MK II.

Tom,
Thanks for that additional info.

It’s possible to adapt a modern element to fit.
The details are on a post I submitted last year.