Need to find out what this is

I haven’t been able to find what the part shown in the photos is or is for.

I was doing more gunk build-up cleaning out in The Valley of Death and found a two-wire wire harness section not connected to anything. The inner end was under the distributor where some other wire harness sections passed under, except that this one was cut off or broken off and just laying there. So far, i haven’t found another loose end within reach of this loose end.

The outer end goes to the component in the photo, located behind the grille and mounted to the horizontal divider thsy the horns are mounted under.

If I find out what this component is, I’ll be able to figure out where those wires are supposed to go.

I suspect that it has been disconnected for years … but if it is important for engine operation, then it’s a new issue. 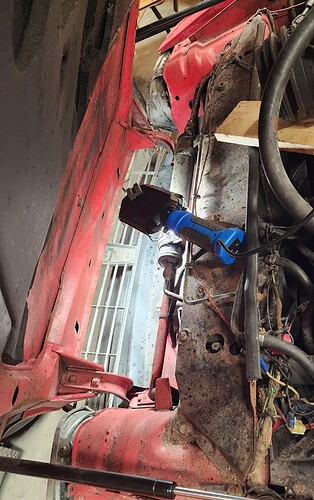 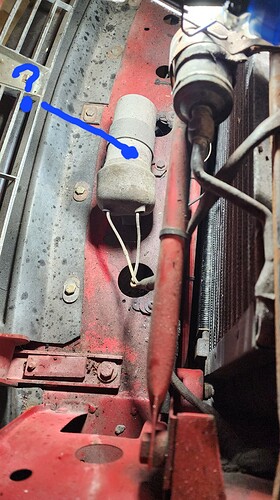 That is coil #2 of the dual coil system on a Lucas ignition car. The second coil’'s output is potted so that it doesn’t output a spark, BUT does serve as an energy saturation reserve so that there is sufficent coil saturation at 6500K RPM to have spark for all 12cylinders. The coils are 1.2Ohms each and thus are 0.6Ohms in parallel (the replacement single coil is also 0.6 Ohms allowing for a single replacment coil to saturate with enough energy to perform as well as the 2 coils on the Lucas sytem.)

So, as I understand your description and purpose: at some time in the past, the two-coil setup was converted to a single-coil setup, and the second coil and its wures were cut off and left there, instead of being removed.

One more thing for me to remove while cleaning everything up and making the wiring neater looking.

That is a possibility. There’s nothing wrong with the dual round Dulcier coil setup, but a fair number of people have used the single coil that looks like the blocky squareish Marelli coil. If it doesn’t look like that and is round, it almost certainly HAS NOT been swapped over to the available 0.6 Ohm single coil.

Guess I need to go out and start looking for the other broken off end of the wires as the one coil mounted at the bracket on the throttle pedestal is definitely round and not squarish (as I sit here visualizing it and its mounting strap).

When the dual coil setup has been replaced with a single lower ohm coil, that available coil looks more ore less like this: 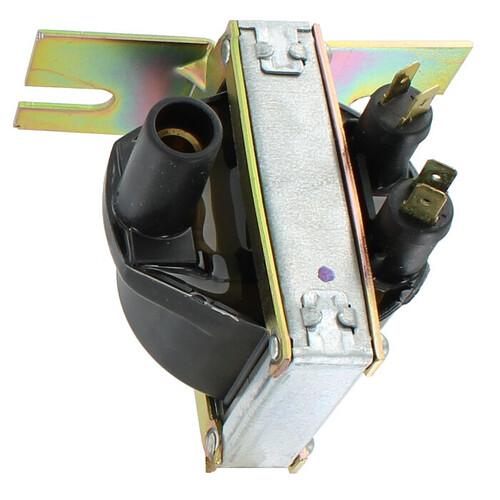 I’ll be doing some more testing on this in the next couple of days, but …

After replacing the plugs and plug wires, cleaning most of the 40 years of gunk in the valley out (still have more to clean in the valley and all over the engine later), I wired the secondary coil to the primary coil when I was ready to start it.

The engine cranked and started, run for what seem like less than half a minute, then it would shut down. After checking everything I could think of to check, I thought about the previously not connected secondary coil and disconnected it. It starts, runs, and keeps on running with only the primary coil connected.

I’m the second owner and have owned the XJS for 15 years now. At some point in its previous life, someone, for some reason, disconnected the secondary coil and left the original primary, round, Lucas coil (has Lucas molded into the plastic top where the terminals are).

Any thinking as to why it dies when I connect the secondary coil to the primary coil?

I’ve driven it a lot over the past 15 years with just the one coil connected and it has run well and fast, and with good gas milage of around 16-17 mpg around town and 22-23 basically all highway (2-1/2 hour interstate highway drives).

The second coil is for higher rpms, so if you never got past 5000rpm, you probably didn’t notice.

My guess would be secondary coil is bad?

The newer square coil is a good $80. But it should last a lonnnng time and work for all rpms. It will also neaten up the engine bay. I did it just for that, even though my dual coil setup was working fine.

I never took it to red line, no.

You haven’t taken a photo of your main coil. Previous owner could have put in new round single coil, not the square Jaguar one, and simply disconnected secondary coil. There are some aftermarket coils that will work fine as a single coil on our V12s

Photos of Lucas coil attached - albeit rather limited view at this time.

The wire circled in blue is the temporary wire to the secondary coil for testong (which is currently disconnected and capped so as to not short out or ground out). 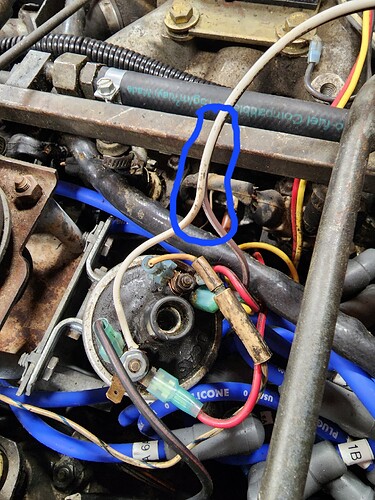 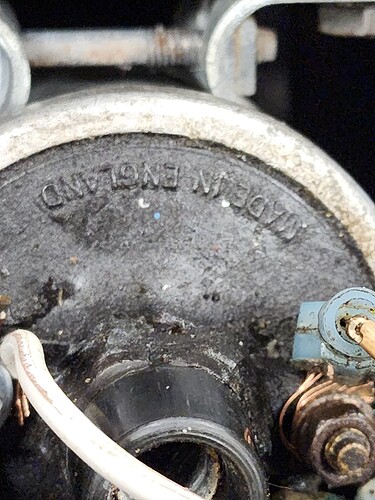 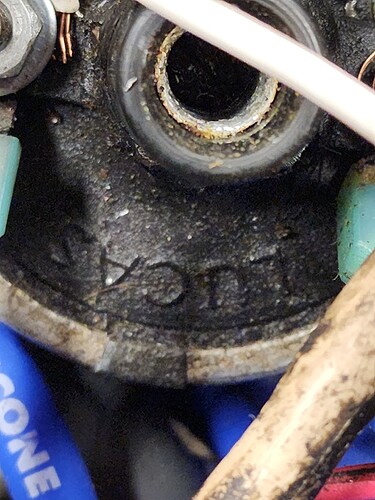 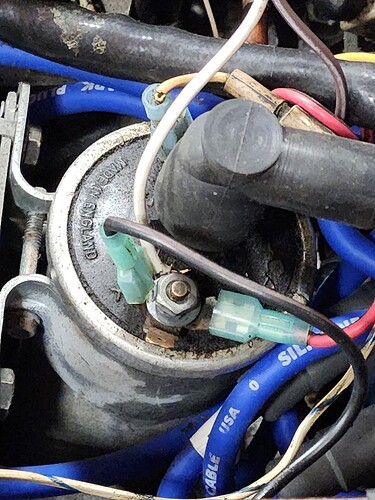 Ok, I believe you. LOL

Are those Magnacore plug wires?

Also, what kind of spark plugs are you using?

Spark plugs are Champion 304 Copper Plus. 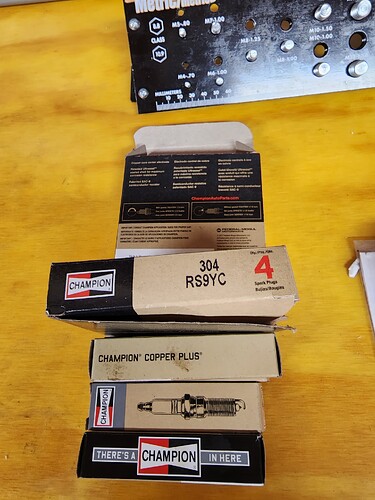 I was going to speculate, perhaps more modern tech plugs and wires allowed single coil to work at higher rpm? But maybe not above 6000rpm, which you never tested.

The old wires these new wires are replacing were the old fashion resistance wires.

If it was my car, I’d buy the new square Jaguar single coil. Sure your Lucas coil still works, but its decades old. I wouldn’t trust it.

Then you can remove second coil up front, and those unsightly wires.

Yes, I’ll be removing the secondary coil and the wires to it.

Regarding the coil … if it ain’t broke, don’t fix it.