Trying to decide whether to slip in another V-12 or do the conversion to a Chevy small block 350 or 400. Any suggestions? I am looking at johnscars.com for their complete conversion kit. Looks pretty good. There will be 400 lbs less weight and less stress on the AC, etc. I hear claims that it is very quick and fast with the 3-speed auto transmission but I may want to keep my 5-speed manual. It will be a lot less expensive to put in the $2500 V-12 my mechanic can get (short term anyway). Any feedback would be appreciated.
Thanks,
J.C.

In the year 2019, the way the hobby is going and the TRUE ENTHUSIAST has returned.
Its your call…Ive driven them all, The V8 is so simple, clean and lets face it ZERO maintenance.
BUT…
Its a heart transplant with a DIFFERENT heart.
Will the rear seal leak.
Will the spark box cut out.
Will the cam covers leak
Will it smell of antifreeze when it gets hot…
Yes, but its the original engine.
The cars aren’t worth much, do what you like.
You will never get your moey back so if your driving across the country and leave it out in the rain?
Who cares, do what you like.
I would stay stock, Painfully…
Enjoy
GTJOEY1314

Half, or even more, of this car’s magic and allure is the V12.
They are gezillions of V8 around but not that many V12…
Nevertheless, both solutions have their plus and minuses and I bet you will find many different opinions in that matter.

Point though, you still didn’t tell us what’s wrong with your old engine… you mentioned water, but where and how? If rings and pistons are good the bottom end of the V12 is bulletproof, why are you not considering repairing your old engine ?

I have done a lot to this Jag so I am not too worried about it being 100% pure even though I would like for it to run and feel pure. I have put front and rear end sways bars in, new radio, 5-speed manual, etc. I really just want it on the road running fast a quick. I am also worried about having someone being able to work on the V-12 in the future (my mechanics are not getting any younger) and the small block should be no problem. I do appreciate your reply and believe me all of this keeps going through my head. That is why I haven’t made a move yet.
Thanks,
Jep

My mechanic is having someone else take a look at it when they get into town. My current mechanic is a great mechanic. He only works on foreign exotic cars and he has taken care of mine for years. He thinks I should stay with the V12. I believe he may be able to take care of the problem but the cost would be more than a replacement that may in better shape than mine. I will ask the questions though and show him your reply and see what he thinks.
Thanks for your support. I will keep you posted.
Jep

Jaguar installed the AJ6, so the V-12 was not all that sacred to them. But if you’re going to swap in a Chevy, at least make it one of the more modern fuel injected engines with an over drive transmission. I’ve been cruising the for sale ads for months for a spectacular low mileage chassis in need of a LS6 power plant/transmission.

You may as well buy a Camaro or Vega if you really want a Chevy V8.

OK, so maybe I’ll use a Ford or Chrysler V8. Sunbeam did it to the Tiger (I had one), TVR did it (I had a Griffith), Morgan did it, MG did it, Rover, Triumph, AC, Jensen…I did it with a Lotus Eclat and a Bitter SC. Ford did it to the Jaguar sedans. Every one of them a far superior car with the U.S. lump.

I have done 4 swaps. The V12 is quiet but anemic. Cant beat the LT-1 its rock solid dependable. I had a 6 speed in mine. Im going the LS route this time. Cradle will need work as they cant handle the V8. 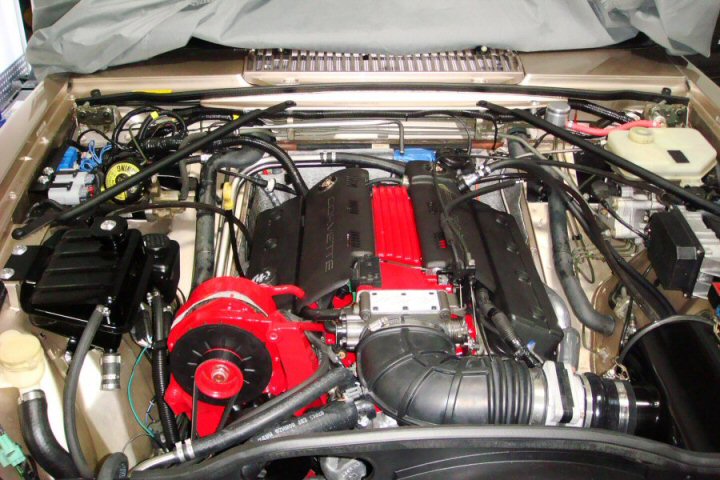 Why changing from LT-1 to LS especially with the extra work (cradle)? Just curious!

Just standing at the parts counter and asking for 12 spark plugs must be worth it when a bystander asks how many cars you have and you say ‘just the one, its a v12’

Half, or even more, of this car’s magic and allure is the V12.

As we all are aware, swapping in an American V8 wholly changes the personality of the car. The grace is gone, it becomes a pavement pounder in the best American muscle car tradition. Even the sound changes. Whether that’s a good thing or a bad thing is in the eye of the beholder.

That said, I fail to understand why anyone would opt for an old Chevy cast iron lump when LS engines are available. I just don’t get the appeal of 1950’s technology.

Oh, I’m sure the car will be superior removing the V12 for an American V8, but to me, it’s lost it’s soul. Be that a huge, complicated, overheating soul

Ah not the whole story. I sold that car to a guy in Texas. Regretted it ever since. So I’m going to do another and this time keep it. The old small block is history in my opinion. LS is the only way to go . Its lighter and 400HP right out of the box and for an almost 4000 lb car, smiles per mile! They also have a flat torque curve.

Andrew at Jag specialties has this in the can. Johns is still doing small blocks although I have bought 4 of his kits. Very knowledgeable fellow and has pulled my but out of the ringer a few times.

The XJS is a pistol to drive when you get in the 300+ horsepower range.

By cradle I mean the differential carrier. It has bonded mounts. I must have replaced them 4 times. They couldn’t take the torque of the small block. Andrew says he has better mounts. If not I will make my own and cast them in urethane.

and cast them in urethane.

Probably better to go solid the urethane will self destruct if its exposed to high frequency vibrations, not saying that it will in that position but it dosen’t tolerate build up of heat.

I left the car out too long under a “rain proof” car cover without driving it. Apparently the cover failed and the car got wet and was covered and couldn’t breath. Moisture got in the engine and ruined the pistons, etc. My mechanic says he can fix that problem and get the car running again but it would be far more expensive than getting another engine, whether a V-12 or some other (preferably Chevy). I don’t show it at car shows and I am not concerned about the originality of it for a future sell. I just want my “bad ass” car back on the road again and want great performance. Heck, all they see is the front end coming and the rear end going anyway. I will be keeping the 5-speed manual and the sound of it weighing about 400 lbs less with the V8 and less problems sounds pretty good. BUT, for the short term it would be a lot less expensive to drop in another V-12. I am still open for suggestions.

These cars are not worth much particularly the coupe, hard to justify the cost of a Chevy swap. I think $2500 sounds like a bargain if the replacement v12 is a good low mile engine.

I don’t know what guys are looking at with these LS swaps, but that is definitely not a cheap swap even with a used engine. The carbureted 350 crate engine is a different story but the HP isn’t there, at least compared to the LS.

The V8 is so simple, clean and lets face it ZERO maintenance.

More specifically, the V8s themselves may be much less of a hassle to own in a number of respects but, thinking back over 20 years of various Jaguar forums, it seems to me that lumpers often spend just as much time and effort tinkering on their engines the V12ers. Lots of time and effort sorting out details.

Mind you, I have nothing against the V8 conversions. There are good arguments to support the decision. For me personally, however, the only reason I’d do a V8 swap is an easy way to get a lot more power. Other than that I’ve been happy with my V12s. And, over the decades, the internet support for these cars/engines has become so comprehensive that it’s easier now to own a V12 than it ever was!

Here’s the most you can spend on the LS3 itself: 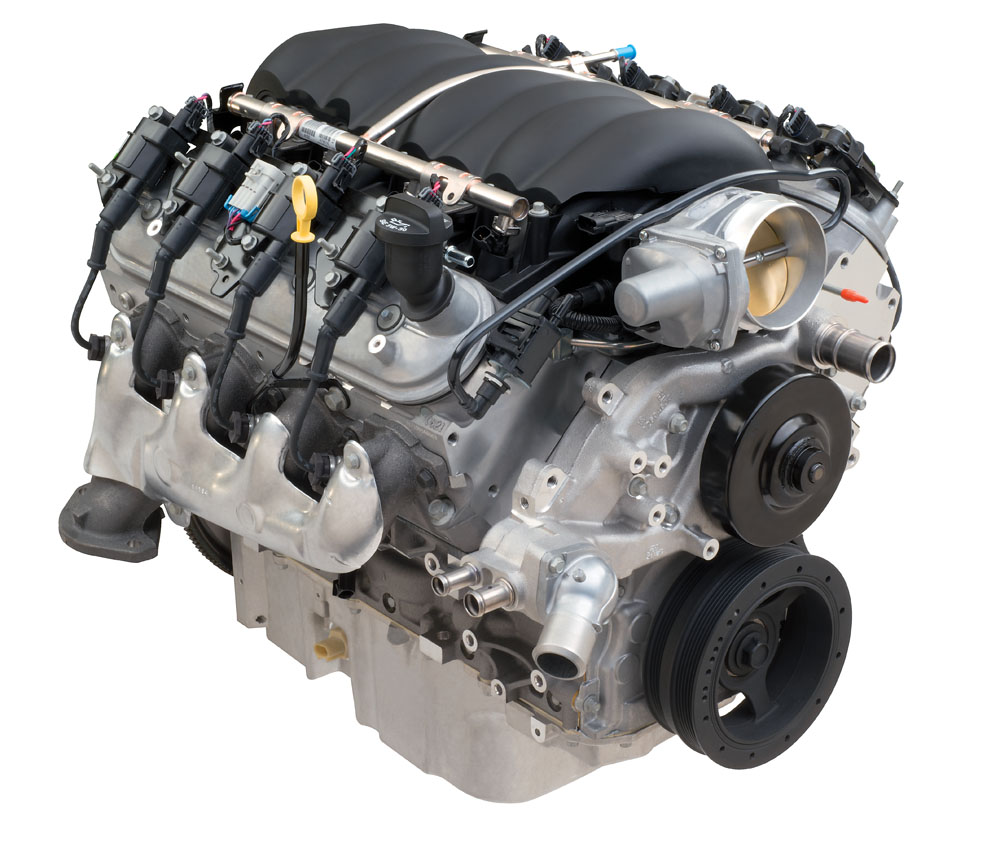 Presumably you could get a secondhand one cheaper. Obviously, you’ve gotta add a wad for accessories such as a radiator, motor mounts, etc., and labor if you’re not gonna do the work yourself.

It doesn’t list the weight, but I seem to recall it’s around 450 lb. compared to the Jag V12’s 700, so you’d shed about 250. Yes, that’s enough to require a respring of the front end unless you wanna ride around with the front end up in the air. I dunno if the springs from a 4.0 would work; if it were me I’d be tempted to just cut down the stock front springs which would lower the nose and also make it stiffer. The grace is gone anyway, having the front end more firm is just icing on the cake at this point.