Hi new here . Just bought a 1989 xjs v12 convertible in May. Ran fine but very little maintenance records, so I changed the oil (mobile 1 full synthetic),plugs (auto lite),Front breaks and calipers, Front bushings and struts, bearings ,I left the springs for now . I wasn’t sure on how to change the springs but Utube got me strait .in the back I changed the shocks and springs (bilstien ,front also) . I put on new 15"latice rims , i also redid the charcoal filter, a guy up the street gave me a print out of kirbys book (best thing since sliced bread). Also changed the cap and rotor and wires .modified the air boxes and put the round headlights on (i like them better). After all this still runs good just seems to run rich( exhaust smells fuely at start up and it stumbles a little bit for the first quarter mile) . Now that winter is coming (I live in Pennsylvania) I am going to change the plugs again to champion ,remove the air pump and plumbing ,change the fuel regulators ,clean the valley,and change the valve cover gaskets,fix the a.c. and change the trans filter. I am also going to drop the rear and change the rear rotor s and calipers, change the fluid in the rear and mess with the exhaust (get rid of the mid mufflers and put a crossover on it ). Now to my questions. Do I have to do anything to the E c u ? Where is the best place to have it reworked ,if I have to?

Best for ECU on my opinion is AJ6 Engineering.
Google it and you can get the link.

The archives here probably have other recommendations as well

Welcome to the forum Robert!

If the engine works well otherwise I suspect that the Base Fuel Map on your ECU is not set correctly and it’s too rich until the O² sensors kick in.
You could experiment by setting it a couple of click leaner.
The Coolant Temp Sensor and Throttle Position Sensor are also something to look at.

Thanks for the reply. My temp gauge does not read all the time and my oil pressure gauge will drop down also the tachometer is bouncy . The fuel gauge will not read to full .

Sounds like it is probably time to pull that instrument cluster. Clean up all the contacts and grounds on the printed circuit board, and don’t neglect the individual barrel style gauges for the water temp, oil pressure etc. Checking for resistance as you go. On my voltmeter (or Oil Pressure, can’t remember!) I actually had to add a bit of solder to the contacts as it was almost clear though the very thin copper and had high resistance despite careful cleaning.

I pulled and ‘rebuilt’ mine last winter. As mine also had erratic readings. All good after. Good time to replace blown bulbs as well. I also added an additional ground, just for insurance. As your ECU has nothing to do with temp and oil pressure gauge readings.

Consult The Book for additional advice re the gauge cluster.

After all this still runs good just seems to run rich( exhaust smells fuely at start up and it stumbles a little bit for the first quarter mile) .

If the rich running is confined to just the initial running after a cold start then I’d first suspect the coolant temp sensor. It’s job is to tell the ECU the engine is cold…but if the reading is skewed, it might be telling the ECU that the engine is much colder than it actually is, thus the over fueling.

you can test all of those sensors with a multimeter very easily,if you want to know for sure before throwing money at it. Wires-esp grounds are notorious here in Pa too

Thanks I will check them

Search for the “V12 Focus Manual”, gives a lot of info regarding the V12 injection on the HE engine. If I recall, there is a chart for resistance and voltage from the coolant sensor to the ECM for cold running; on my ‘88 I had to parallel a resistor to get voltage correct as the 5v reference from the ECM was high. ECM reads voltage! I think it was about 2700 ohms to get temperature voltage correct at 40F…makes less of a difference at operating temps.
I am sure AJ6 could fix the 5v feed issue on my ECM…but I use the car daily and shipping to the UK isn’t an option.

As most have noted, the Temp Sensor is critical to the ECU for fueling. In fact, it’s one of the few critical sensors. The ECU’s has an exclusive temp sensor (2 prong unit) behind the A bank thermostat. Given the car is running, I suspect the wiring is OK, but corrosion can add additional resistance so cleaning the connection is a good idea. Clean the IAT (air temp sensor on the intake) connection as well, although it’s input into fueling is quite minor. The TPS has more to do with acceleration enrichment than standing RPM fueling. Its also worth checking that the vacuum hose from the nipple at the middle of the manifold crossover pipe is good all the way to the ECU (MAP sensor input). O2 sensors will make a difference in MPG if they’re old and slow at swinging voltage, but they have nothing to do with startup fueling, and fueling much outside of cruise.

And yes, with these old ECUs it does make sense that some components might drift and thus create a situation where it is mis-reading an otherwise correct temp sensor value, but that wouldn’t be a high thing on the totem pole to check I’d think.

If needed, one can test the continuity and resistance of the temp sensor all the way back at the ECU connector w/ a multi-meter (and batt & ecu disconnected).

I made this up for those wanting to test the wiring. Note that it is wrong in one respect. The long row would be on the bottom when viewing, but otherwise it’s correct (so mentally flip it if you decide to use it.) 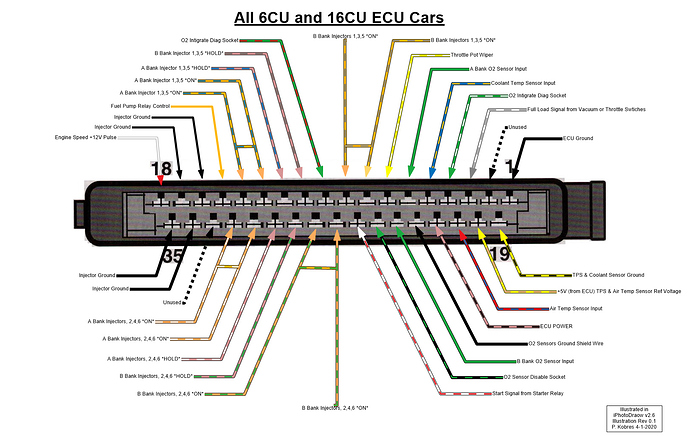 The ECU’s has an exclusive temp sensor (2 prong unit) behind the A bank thermostat.

Sorry, but the coolant temp sensor for the EFI is at the B bank thermostat.

bangs head OF COURSE B BANK!

Thanks for the correction.

I took the air pump and plumbing out cleaned the valley pulled the intakes pulled the cam covers, stripped and painted them took the fuel regulators and rail off ,removed the fuel lines,i didn’t depressurize the fuel lines first but there was no spray when i disconnect the lines .now i am going to replace the fuel lines with vinyl injector hoses and the vacuum linens with silicon lines ,i am also redoing the rail. I think i found the sensor but it only has one prong it does look dirty i will clean it and test it also i broke a vacuum sensor that has a wire coming out of it dont know what it does but i will try to fix it . I hope to get it back together soon just waiting for intake gaskets . the ones i took off are 12 individual ones the new ones are just 2 long ones will they work?

I’m no so sure about “vinyl” fuel injector hose. You should only use SAE J30R9 as the standard (or it’s DIN equivalent standard). Maybe vinyl fuel hose is a thing, but I’ve only heard of it being used on low pressure lawn mower engines.

The B bank fuel temperature sensor behind the thermostat is most definitely a 2 prong unit. Any single prong sensor would be for gauge.

The vacuum object could have been one of a number of things: The Vac WOT switch, or vacuum delay valve.

Yes, the standard way of supplying the intake gaskets is as one piece now. You can use them that way or cut them apart. Its fine either way. 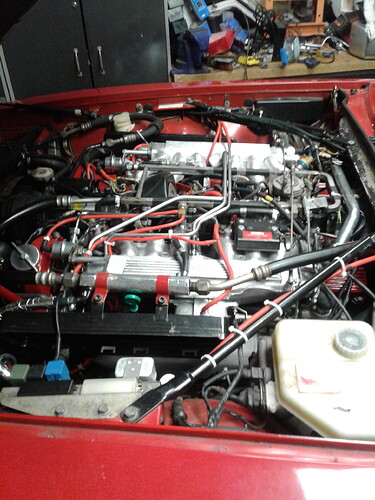