Hello everyone, figured I should give a quick introduction and say hello. I had joined back in 2016 when helping a mate with his old XK150, but only ever posted the once.

My name is Michael and I live just outside of Pittsburgh, Pa. Early December 2020 I had the opportunity to buy a 1993 XJ6. For the $1000 pricetag I couldn’t resist. It was non-running as it had been sitting for a number of years. So I’m spending the winter getting it back to road ready shape along with my other British classic car.

About the car. Its a 1993, car number 683049, built 7th May, 1993. Painted in Brooklands Green with a Barley interior. Currently sitting at around 124,000 miles From what the bloke at the XJ40 Registry told me, its a bit of a “grey area” car. It was built to Sovereign spec, but not badged as a Sovereign as that was around the time the US lost the Sovereign. 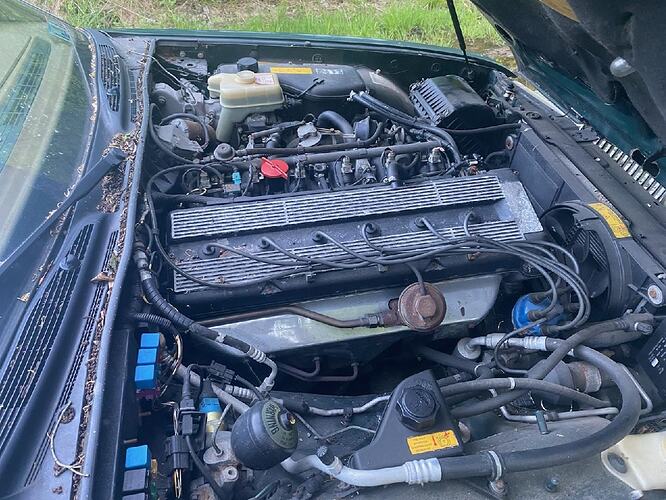 Terry, my paint code is “HFB” which is Brooklands Green (later British Racing Green), and my trim code is “AFW” which is Barley. It’s rather funny, your car is a 1991. My birthday is 1991,same year as your XJS. My birthday is actually on January 24th. lol Yesterday (as it is currently 10 past 12) was my 30th birthday.

Terry, another little bit that might help you determine your interior trim code… When I removed my right hand underdash panels to fix my fuse panels they had “Barley” stamped on the back of them.

That depends on the market Robin - in Canada and probably the USA too, only the VDP’s (daimler trim elsewhere) had the inlays. My parts car (Sovereign, 94MY) had no inlay.
The exception is the very early Canadian cars. Those early cars had the inlays but they also had the European Valeo headlamps, dropped soon after in favour of the Hella twin reflector headlamps.
I think the fitting of a sunroof might be more of a tell tale descriptor? Not sure.

Hi, nice looking car, great colour too, looks like a good buy at $1000.
It looks like it’s been parked under a tree or bush for a while, you should remove the plastic panel below the screen and clean all the leaves out of the plenum chamber underneath or you’ll end up with rainwater flooding the inside of the car.

Thanks Larry, differences between the markets eh. My Sov with inlay was sans sun roof.

Welcome, nice looking car. What is the blue one?

Thank you guys. To respond in order… Robin and Larry, my car has the radial alloys, power sunshine roof, heated seats with electric lumbar, heated mirrors, heated door lock cylinders and heated headlamp washers, came with a block heater (think it’s been removed), it also has 8 speakers, one each in the doors, 2 small ones in the ends of the front defroster grills, and 2 small tweeters in the ends of the rear parcel shelf. Not totally sure, but seems like I’ve got quite a bit of kit for it to be a lower trim car. But I could be wrong as I’m new to the car. Going to look at getting a Heritage Certificate from Jag.

Casso, it has been sitting a while. And while I have vacuumed up everything on top of the scuttle, I would like to pull it up, but not comfortable doing that till I get the wiper working, that way I don’t accidentally put the blade on in the wrong spot.

Robert and Gary, it is indeed a Jensen… A 1974 Jensen-Healey, that I also rescued out of a backyard last June where it had been sitting under a tarp for 5 years. It’s a late 1974 (its technically a 1975, but they backdated the vin so as to get around emissions). It was originally white with tan interior, but when I got it, it had been repainted into Ferrari Tour De France Blue, and the interior reupholstered black. It’s powered by a Euro Spec 2 litre Lotus Twin Cam with dual Dell’Orto side draft carburetors, mated to a Getrag Dogleg 5 speed. I’ve always been a sucker for the odd duckling cars (even used to have a 1959 Edsel Ranger), so I fell for both the Healey and the XJ when I found them.

20 Characters? What does that mean?