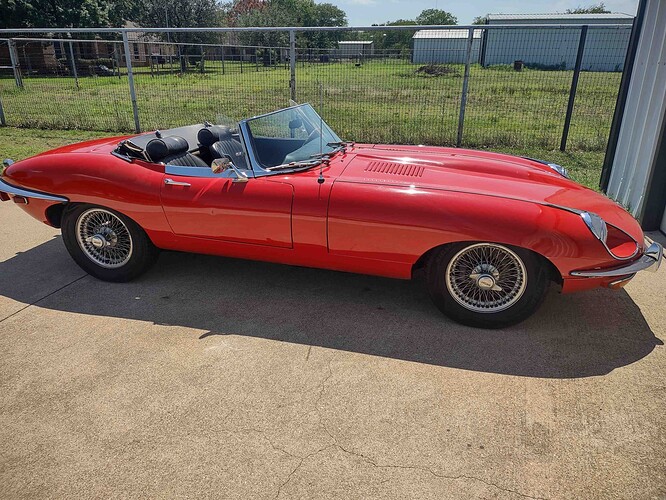 Bought this 68 Series II OTS a couple weeks ago and have really grown to appreciate it. My first Jaguar. It’s going to need a few things but it drives down the road just fine. First thing I did was adjust the I’ll fitting bonnet, found some missing parts that were needed, and installed a new exhaust system. Fluid flushing is next, then I’ll just drive and enjoy until other projects are done and I can dive into this one.

I figured I’d join the group since every time I search a question I may have this forum pops up, so I know I’m in good hands with my project.

I think you will find out that there is no more helpful or knowledgeable group on the planet! I will take by your avatar name, that you are a pilot? If so, you will also find yourself among friends here, since many of the members on here are pilots too. Beautiful looking car, and we look forward to your adventures!

Dave- welcome to the funny farm! As Wigs said, there are a LOT of folks on this forum that have extensive knowledge on these cars. You won’t find a better place for answering your E-Type questions than here.
A12 pilot- as in Archangel A12? If so I need to hear whatever stories you are allowed to tell!

Thanks Men! I appreciate the greetings. The name comes from an A12 Super Bee (440-6pk 1969-1/2 Dodge) that I restored and unveiled at the Muscle Car and Corvette Nationals a few years ago, although yes, I’m a pilot too. I’m too young to have flown that (or is brother, the SR-71) but it’s a dream plane, no doubt.

My car is originally Willow Green and has a 4.2 from a 70 I believe. Haven’t checked the numbers yet, but I guess I’m fortunate that I have the triple SU set up.

I’ll be lurking around and as I dive into things will be posting up more. I’m down in Texas and hope to meet up with others one day. 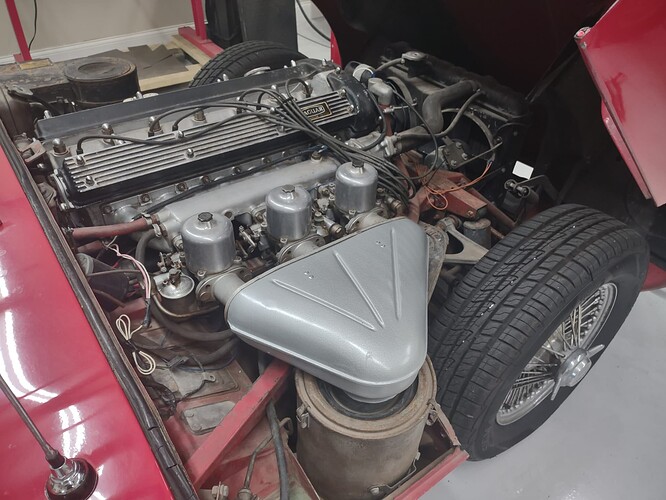 Welcome… You’ve found the right place, a place loaded with experienced E-type (and others) Jaguar owners/mechanics and enthusiast. Once bitten by the “E” bug you can never go back… Ha Ha. It’s even worse if your a pilot!
So, as you and your coupe get acquainted ask and, as always, post your car’s status with pictures if possible. We all help one another to that ultimate goal - a reliable ca -r!
Something to cherish, enjoy and show off!!! LOL

Welcome to the group. You’ll likely find any question you have answerable here, and you will have a few…The Forum members are very helpful and supportive - unless you plan to butcher your beautiful car, that is.
I’ve just finished a full restoration of a 70 FHC where I switched to triple SUs, with just one trim panel and a few trim pieces to go. Under the bonnet, looks just like yours.
The search function (magnifying glass, upper right) is very helpful to get to pertinent information by the way.
A great resource for Series II cars is the Series II parts manual by Richard Liggett, available from xkebooks.com.

Hello Dave, and welcome.
There is a wealth of knowledge in this forum.
Let me be the first to ask though; Are you sure that it is a 68? The turn signals below the bumper indicate series 2 1969 and newer.
Beautiful E-type, and enjoy it in good health.
Bill.

It’s certainly configured as a Series II with the front turn signals and taillights below the bumpers. One can compare the vehicle number to the list that tracks the running changes jaguar made to get a rough idea of when the car was made A Heritage Certificate would erase all doubt.

Regardless it’s a nice looking car. Welcome aboard, Dave.

Welcome to our little sandbox! You’re in good hands with questions about the E here. Good luck with your ownership - drive and enjoy the journey.

Welcome Dave, where bouts in TX? He have several people scattered about. That looks to be a nice dry example.

Take a look at XKEdata.com. you can put in the VIN and look at cars built at a similar timeframe.

Thanks guys! I thought this was a 1969 based on the production date, and here’s the Heritage Certificate. You guys tell me. I chatted with Kevin over at Classic Fuel Injection about an EFI set up and he even said the same thing based on the dates, but agreed it was a very late 68. It’s titled as a 1968.

I’m in the Fort Worth area. I’ll check that registry to see cars around mine. Neat stuff! 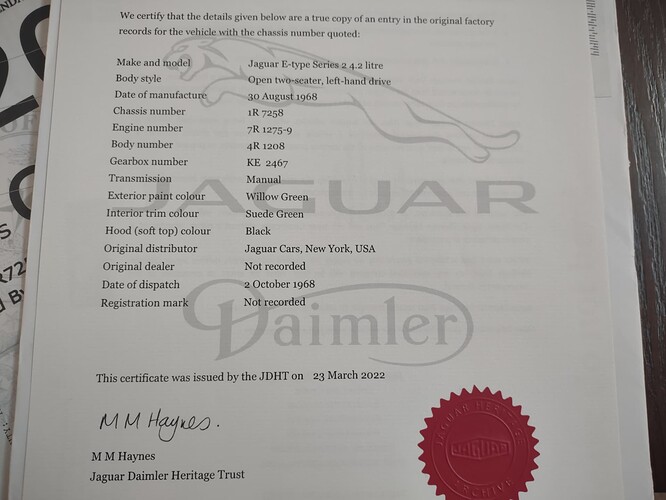 I’ll chime in with a hearty welcome. Like many of us on the forum, I couldn’t have done my work without the help of the expertise found here. As confirmed by the Heritage Certificate, your car was originally willow greeen but has been repainted at some point in its life. Whoever did the job, did it the right way. Often a change of color ignores the less accessible areas like the frame rails, bulkhead, etc. Yours has had a complete job done and that suggests that any other work by your PO (s) was probably done with care. Enjoy your new toy; it’ll never grow old.

Not that I’m necessarily against those kind of modifications, but I have to ask… Why? You really won’t improve the fuel mileage that much to worry about, and properly set up, the SUs work perfectly well.

Normally a build date this late would have been titled the following year. Mine had a build and dispatch date of Sept/Oct 63, and it’s titled 64. How different states titled cars back then was quite state dependent though. From the visual specs of yours it seems like a full on series 2 car, which began in 69. Model year 68 cars typically have vestigial series one features.

That’s correct, in regards to other makes/models I’ve dealt with, July/August usually starts the next year model year. That’s why I thought it odd it was titled as a 1968. They did a good repaint, thorough, but there’s some other stuff on the electrical side that leaves a little to be desired.

The SUs run really well. I chatted with Kevin just in reconnaissance info gathering for the future. I wasn’t planning on doing that anytime soon. Just wanted to see what what out there since I’m new to the Jag aftermarket scene. I’ve fuel injected several classics before. Hands down, best thing I ever did. But that’s all debatable depending on who you talk to and what time of day it is But for me, I love it. These SU carbs run really well though. I like the setup a lot.

New exhaust is on and it fits great. Sounds good. Quality part. 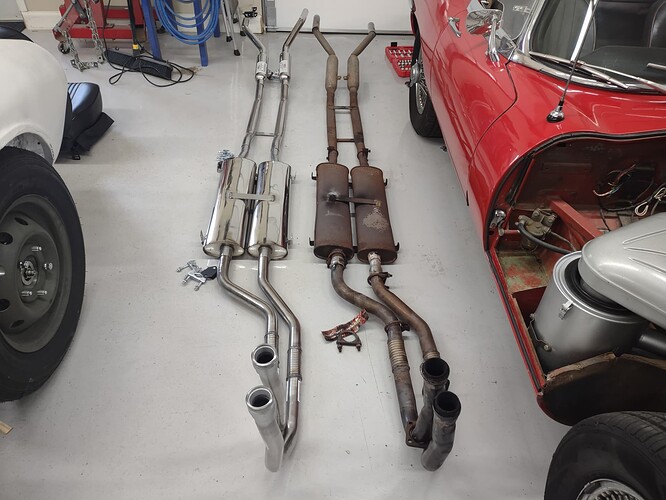 I was very young in the late sixties so I don’t know this for sure. In the US dealers or new owners apply to the states for the title. Most dealers would love to put the newest date they can on it to sell it for more money. Cars built the same day as this are titled is 1969’s. In my mind it makes this car a little bit special. Maybe there was a story that we will probably never know.

Once manufacturers had to certify that a car met emissions regulations, model years became much more regimented and tied to the VIN number.

Dave- With a Chassis number starting with1R this is certainly a Series 2 car (as evidenced by many of the features on your car, some previously mentioned). All 4.2L Series 1 cars (1964 - 1968 model years) had chassis numbers beginning with 1E. The last of the series 1 cars (incl. unofficial Series 1.5) were built in July 1968 and ended with OTS chassis number 1E18367. The Series 2 cars started production in August 1968 with chassis 1R7001 being the first LHD OTS off the line. Based on this your car seems to be the 258th Series 2 LHD OTS. There were a total of 7852 Series 2 LHD OTS cars built, so yours is certainly a very early example.
Simply a nit, as your car seems to be a very nice example regardless of which model year appears on the title!

Now for sure one modification I highly recommend as you get rid of the points and condenser, and replace it with some kind of modern electronic ignition.

The leading one out there is the 123, which is fully programmable and by all reports, really livens up the car. One thing that is available is EDIS, but that takes a little bit more work but is still better than the anti-diluvian ignition system the cars came with