New to the forum, just bought a rough XJS, where to start?

Hi everyone. Just joined the forum the same say as I bought my first XJS, which is a black 94 4.0 convertible with 84,000 miles on her. Clear coat is shot, rag top is covered in tape and the top doesn’t work with the switch. Front seats are ripped, windshield is cracked, hand brake doesn’t seem to work, one rear light lens is cracked and the rear shocks are literally shocking. The good news? Engine runs beautifully, it doesn’t run hot, brakes are good, no warning lights, all electrics work (except top) and it cruises on down the highway at 70mph with ease! Body is solid with no rust that I can see on body panels, pillars, on sills, on wheel arches or on running gear.

After giving her a good clean, I am trying to figure out the logical place to start. I need to fit a new top, but guess I should wait until any body work/paint is done. Same deal with windshield, I guess I should remove, paint and then have new one installed? Is it a smarter idea to replace the front seats with good condition used ones (foam is not in good shape) or to fix foam and fit after market seat covers (Vinyl or leather seat covers)? Is eBay the best source for parts, or is there an aftermarket/used parts scene out there?

I am based in a Tulsa, OK, need all the help I can get, but promise to give back also!

Hello Paul, sounds like an adventure. A newer model than mine with the 6 rather than 12 cylinder engine. I’m sure others will chime in with a lot of great advice. I’ll have to pass on this one based on reasons I just mentioned (slightly different era than mine). In the meantime post a few pictures of the beast and let’s have a look at her!
Gary…

Thank you sir. And here she is: 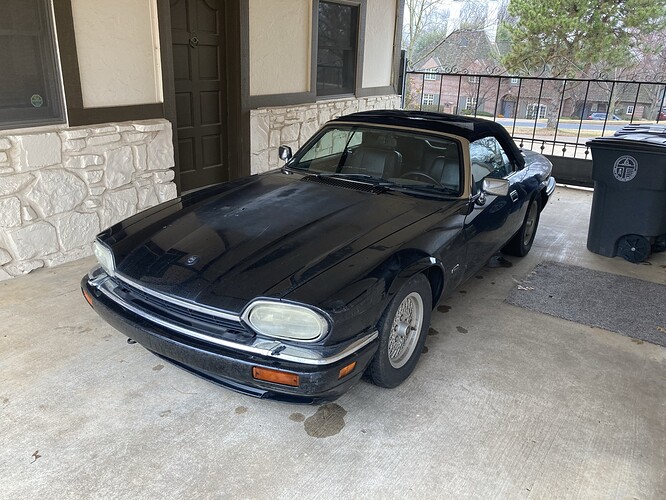 That’s a classic in the making. Sounds like you’ve got a great running car but besides the obvious basics, you should establish a starting point. Which should include fluids ,belts , hoses, t’stats, filters fuel and air,ignition and spark plugs, tires and suspension, all the not sexy stuff. But will get you on the right path to reliability and give you a sense and feel for the car.
The cosmetics are something you can deal with in your own time and budget. But at the end of the day no sense in driving a fine looking automobile stuck on the side of the road , hitching a ride home because you didn’t take the time to look into the obvious mechanical maintenance stuff.
Good luck sir and stay the course.
My two cents, Gary…

Thanks Gary, makes perfect sense. May not be the sexy stuff, but is the easy stuff and which still provides immense satisfaction afterwards knowing it has all been done and done right. Will start with plugs and wires and fluids tomorrow!

Welcome to the Forum Paul. I don’t think you will regret buying an XJS as they are great cars. I am on my fifth one in the past 20 years, and I have loved them all.
This forum is a great source of information and advice.
There are a number of suppliers that will enable you to source the parts that you need. From my experience, the 4.0 Litre engines are more reliable with lower maintenance costs than the V12s.
It appears that prices on the XJS are on the rise, so as long as you don’t get too carried away, your investment will be worth it.

Paul,
Sounds like a perfect project to me. Don’t bother with visual aspect, it’s giving a special character to your new love. Start from the hanbrake - after that everthing will be easy.

I would start with the mechanical stuff as mentioned by Gary.
Download and read Kirby’s book, even though it’s focused on the V12 engine there are lots of very useful info.
http://www.jag-lovers.org/xj-s/book/Jaguar.html

Check all bushings, hoses, cooling and ignition system.
I believe you have outboard rear brakes, so the handbrake is an easy job. If you have inboard brakes it’s an other story and way more involved…
Rear shocks are also easy.

Remove the windshield before painting and install it after to make sure the channels are rust free.

Seats should be leather, you might be lucky with a set from fleebay and the likes, it would be the easiest and less expensive option.
Other options:
https://www.lseat.com/search.php?search_query=xjs&Search=

You should show him your car Janusz!
Greetings.

Nice trim websites Aristo. Nice prices as well… There is an alternative in booking hotel and buying return ticket for Taiwanish upholsterer. Or upholsterer and his entire family… Done similar thing myself when I was in need to paint the grass on the fields of my back garden. Nobody knows better than the guys from Beijing.

I would place on hold ‘solid body’ synonyms for now. Your Jag is a Ford-made copy of genuine opposite-perfection chassis manufactured by UK labour party. You will understand my blabbing after taking the windscreen out…

Speaking of the windscreen, you will need TIG welder, cheap pulse one for £250, a bottle of Argon £100, regulator £25 and dozen of CuSi filler rods to star with. Brazing is better than actual welding in the windscreen areas. Easier to shape/grind.

I would place on hold ‘solid body’ synonyms for now. Your Jag is a Ford-made copy of genuine opposite-perfection chassis manufactured by UK labour party. You will understand my blabbing after taking the windscreen out…

All I can say to this is WTF

Thanks for the reply, great links (seat covers ordered immediately after reading, since price is great and current ones are so bad the foam is just disintegrating). .

In looking at your photograph, I see where the Jaguar has already marked it’s territory ( smile)
Good luck with your car.

You won’t be disappointed with the Lseat covers; fit well and a great value. I would focus on making sure brakes and suspension are 100%, sounds as though it runs good so anything there can be a later focus.
Paint is obviously the most costly proposition; you can minimize by removing all trim and handles beforehand. Make sure you make this part of the quote.
If rubber set windshield it is easy to remove yourself; bonded not so much (which a ‘94 would have)- definitely pull it before paint in case there is hidden corrosion.

Speaking of windshields , I was looking at getting one locally in my town but no joy.
My XJ-S is a 1988 so I imagine I would need to order that two piece rubber trim kit.
Has anyone here ordered a new windshield (and from where) and had it delivered to there door? Mines not cracked but looking pitted. I’m fairly sure it’s still the original.
Gary…

I have been wondering if the front windshield is going to be a problem, since the prior owner said the convertible model has a different windshield that the coup. Is this all special order in the US, or is the car common enough (always a few for sale on FB Marketplace) that they would be stocked in any major town?

sng barratt usa is a good place for parts. About three days shipping into our area, I’m in Tahlequah. I would call them on the phone for your first ordered you might be able to work out a discount.

Go through it and check and replace all the bog standard car bits you see that need it. Tyres, wiper blades, bulbs, hoses, spark plugs, air filter, stuff like that.

Then change all fluids. Engine oil change is a given, but coolant and brake fluid are just as important on these cars. Neglected brake fluid changes WILL cause stuck calipers. Also there is the transmission oil and differential that often gets forgotten.

Your car being a 1994 should make fixing the handbrake far easier than on an earlier one like mine. The brakes used to be inboard and were a pain to access, but yours should be in the wheels, so you can disregard anything saying you need to strip the subframe.

Windscreen is next. It’s probably best to get this proffessionally changed, they’re a bit unweildy. While it’s off check for rust around the screen edges.

Rear dampers are pretty easy, just stick the car up on stands and unbolt them. Access to the top bolts is a bit tight but it’s managable. While you’re under there grease the grease points.

Can’t help much with the convertable stuff, but they were very popular on the later cars so there should be a lot of resources out there on it. I don’t think it’s as bad as the insane Mercedes ones that had about 20 hydraullic rams in it that all fail.

Ebay is okay for parts, but some of the specialists have more available. Sometimes they’re expensive, other times they’re very good. I’ve had nothing but good experiences with SNG, but there’s some others out there. I’m in the UK though, so the selection is a bit different.

Massive thanks for all the advice. The fun starts today!