No air from center vents

Hot/cold air coming fine from side vents, but nothing from center. I can hear the blower working though.

What could this be? Is this a simple fix?
thanks much!

There is a link to fault codes on this site
http://www.jag-lovers.org/ebooks/view.php?Vbook=x300&Vsection=11.3

And a training/service manual with possible cause here

There is a
Blower each side of the car.
Just cus you can hear one working, doesn’t mean the other one is.

I ran the diagnostics, and now it shows 0 faults. Very strange.
Blowers are strong on left and right side, and strong in center of windshield. But still nothing coming from center vents.
Could this have something to do with the cable that connects the Center Vent with the AC system? So even if I set the two dials of the Center Vent to Open, the system doesn’t get that signal and keeps the flap closed?

It could be a stepper motor.

I have a U.S. version, left hand drive car. To get to the servo/stepper motor that’s responsible for opening the flap for the center face vents, would that be to the right of the air distribution box, and I then would have to remove the Airbag to get to it, or on the left side and I would have then to get the dash controls above the steering wheel removed?

Also I noticed there is a part mounted in front of the center flap, with a grill texture/round holes (see attached). If I remove this part, would it be a good idea to gently play with the flap behind it and see if I could get it unstuck? or would that damage the servo motor? 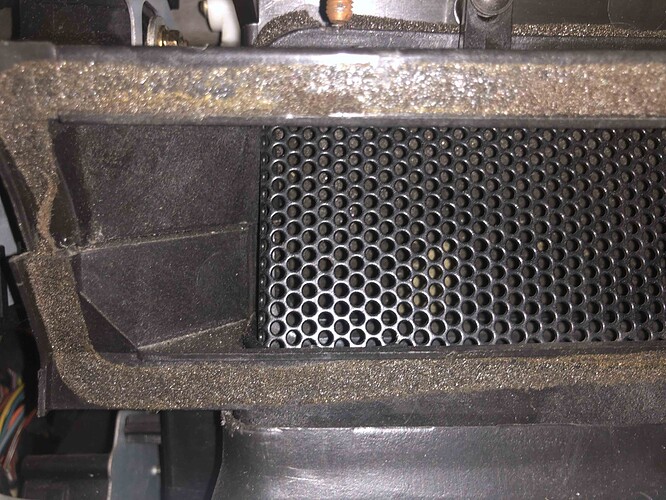 you could try small movements, with the system off.

See if it helps.
Cereul not to break plastic.

And then turn ignition on and operate direction controls and see if it moves.

You have code “45 - Centre Vent Motor” so it looks like the motor is faulty.

I didnt manage to remove the grille (part # MNA6670AB) in front of the vent door (I assume that grille is to protect you from particles from flying in your face).

So I poked through the tiny holes and with the aircon off (aka no air pressure from behind) I managed to move the flap upwards very easily. It doesn’t seem to be stuck. But switching the AC on again, same sitch as before.

Where is the servo motor located which opens that vent door, to the right or left of the center vents in a left driving U.S. car?

i poked with a thin wood stick at the white plastic arm to the right of the facia air duct and it seems to be loose. Likely this plastic arm has come apart at the point where it’s attached to the vent door hinge.

This means I need to take out the airbag to get to it.