As some of you may recall, I have a 71 XJ6. Further, you may recall my indicating that the foot brakes has failed. When I press the brake petal, it goes to the floor.

How can I trouble shoot what the problem is?

Is there any brake fluid in the reservoir?

It’s a 2 circuit set-up, it is unusual for both circuits to fail simultaneously - did you experience a ‘half pedal’ situation before pedal bottomed? If rapidly and repeatedly pumping the pedal brings it up; it signifies air in the system - which will affect pedal travel if either or both circuits are affected…

Other faults to check includes external leaks at calipers and connections; which would tend to draw air into the system - but otherwise only give ‘half pedal’ unless both circuits are leaking. Which can only be found by external inspections. Faulty seals, or bore corrosion, in the master may affect either or both circuits - only revealed and mended by dismantling…

When I press the brake petal, it goes to the floor.

How can I trouble shoot what the problem is?

If the brake fluid resevoir/s are not empty, and/or there is no trace of leakage on the inside of each wheel, or on the ground, then it will be “bypassing” master cylinder seals

This happens when either the master cylinder seals become too old (20yrs?)…and/or the bore wall is pitted

This is a fairly common problem in these cars, and you should cease driving it till the problem is rectified, as you will have NO brakes (even if the problem is intermittent)
Pumping them frantically may work

After inspecting for any leaks, and finding none, it requires the expertise of a brake specialist to determine if the bore needs re-sleeving, and can only be done by a specialist, as the bore is stepped

This should still be cheaper than a new one, ( it may be hard to get a new one)

I have had Master cylinders sleaved, take them off yourself, and take them to a brake shop that can arrange what you need

Lots of tin foil and a cloth to protect the paint from spilled fluid. Pull it, clean it, replace the seals. You‘ll need an impact and a 1/2“ male hex to remove the tipping valve; the bore must be absolutely clean and also free of pitting. If there is any damage it must be repaired professionally.

Even if it’s just a small issue at their age it’s good to renew the rubber parts and give them a good clean. Alternatively:

I found the master cylinders are not expensive. If you enter 64676942 the units that come up look identical. I don’t know if the internals are different, but these masters are not that expensive.

make sure the resevoir is full. If not, top it off.
Blleed the brakes. Elimaination f any air might resotre brake function

if not, the master cylinder is the frst suspect.

Lou has never added brake fluid nor did he know how to do that… I assume he has to bleed them at least. Time to outsource this job!

perfect time to upgrade to a S3 master!

Why is it an upgrade?

i think it’s an upgrade, however it doesn’t help brake performance.
no more remote reservoir, almost any part store will have or be able to get a replacement should it fail again. cheaper/easier to replace. this is why i changed my S1 to S3.
also, the hood will need slight notching to clear the S3 master.

I don’t like changing the hood to fit that thing and don’t care where the reservoir is… ease of replacement is an advantage. As I said think that the S1 master is also available although I haven’t tried one.

**
The fluid level will drop as the pads wear, David, and may empty the reservoir - at least the level should be checked regularly, and adjusted…

And if the fluid has not been changed; it is about time…

It might go low but it will NOT run empty because of pad wear, but the brake fluid has to be changed regularly and at some point it becomes very dangerous…

Again. Lou must have it done. Someone who can’t locate the brake fluid reservoir in the first place and doesn’t know to check it when the brakes fail should do the first fluid change by watching someone else do it. It’s not that difficult but it is critical the brakes work isn’t it?

That’s the fact. And my opinion: if someone else does it it’ll be economical to get the master overhauled either way, otherwise the fluid change is a potential waste.

Robin: Thanks for the response. Yes, there is break fluid in the reservoir. I believe that I checked the level recently and it was a little low, so I added a small amount additional. It the level significant?

Thank you Frank. The car is at a remote location, so I may not get there for a few days. But when I do, I’ll let you know my findings and ask for further guidance. I have not driven this car in several years, so I don’t recall if I experienced “half pedal”. I do know that at the president time, if I press the brake pedal, it got right to the floor. It is not as though there is no resistance, but rather, as if I am pushing an amount of liquid but not a sufficient amount to reach the point where the mechanism is hitting a “stop” point with my foot. The pedal goes completely to the floor. I will check the fluid level again when I am next in the garage to see if I can add additional fluid. I did not check that when I recently added fluid.

I assume that there was some brake fluid in the system but am not certain. I added 3 or 4 ounces to bring the system to full capacity. I don’t know the capacity of the system, but I would assume its more than 4 ounces.

Normally, I would have reviewed the shop manual to determine what to fluid capacity is before responding to your question. However, I am about 10 miles from where the car is stored and I am unable to travel at the moment. As I mentioned above, I added 3-4 ounces to top up the system. I would assume that the capacity if more than that, which means there was some fluid in the system before I added more.

Frank: Thanks for your question.

First of all, the car is not running. The last time I had it running, perhaps two year ago, I added brake fluid for not particular reason, simply to top up all the fluids.

At some point in the near future, I will attempt to start it. It has been at least two to three years since it has run.

Lou has never added brake fluid nor did he know how to do that… I assume he has to bleed them at least. Time to outsource this job!

It seems like I need to get the vehicle running before I pursue the brake issues further. Or, perhaps a better Idea would to have the car put on a carrier and deliver it to a professional to determine the source of the problem.

The more I think about this, the better I like it. I don’t want to mess around with non functions or even poor functioning brakes.

Jay: What is a 3 S Master? Again, the more we discuss this, he more I think the way to do this is to put it on a carrier and haul it down to the repair shop? Brakes are too important to mess around it.

See pics below for comparison. like i said, i feel it’s an upgrade, others may not. it is easier to source and less places to leak. notching the bonnet is no big deal, it does not compromise the integrity or strength of the metal hood.
there are more than 8 places to leak on the S1 pictured and only 3 on the S3. 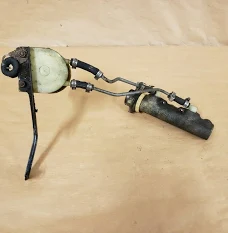 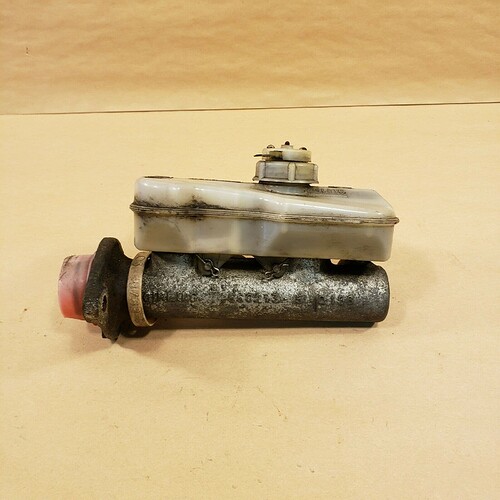