No Oil pressure / how to test the gauge

I just had my engine rebuilt, everything is back in and runing but I have no oil pressure on my gauge.

I have plenty of oil sloshing around the cam lobs in exhaust side. The tappets are not clicking and the pistons are not knocking so i know I have oil. Also went on a 300 mile trip this weekend so I know I have oil pressure, I would just like to see it on my gauge.

I installed a new sending unit yesterday and still no pressure on the gauge.

Though this is how many oil pressure senders work, this is not the case for the unit fitted to the E-Type. It is not a simple resistive transducer. It generates a signal which alternates between ground voltage and battery voltage in a ratio proportional to the oil pressure. The gauge smooths out this signal to give a pressure reading. The operation is described in detail on page P.51 of the Service Manual.

One sender with two terminals, or two senders? If you mean that your oil pressure sender on the oil filter housing has two spades in a “U” shape (like mine in the photo on the other active oil pressure thread), then, since they are connected together, either can be used. If you mean you have two senders, then the second one (located on the engine block plugged into the main oil gallery), is a simple oil pressure switch. It is connected to the red ignition light in the tachometer. There was a period during Series 1 production when the ignition light was actually an “engine running” light, and nothing to do with the charging system.

Hook up the sender to a bicycle pump or an air compressor and measure what it is doing that way. You may even find that the threads are standardised between the two and that it’ll power the car’s gauge directly as you watch the compressor gauge. If the threads don’t match then a rubber hose and a Cheney clamp should work.

All of the small electrical gauges (bar the ammeter gauge) have the same technology inside so will behave in the same manner. That’s how you can test a gauge - by comparing against another.

David, my dash ignition light works off the oil pressure sensor terminal. The second terminal is vacant. I have factory original oil sender.

Patrick
'66 FHC I say '66, but it could be an earlier 4.2 Etype that was bought and first registered in '66. I heard that was not unusual until emission requirements changed that method of determining actual Etype year.

Right, but you can get an idea of when the car was built by looking at the list of changes made to the cars by VIN (Haddock, Jaguar Collectors’ Guide, Porter). The list gives the date for the change (actually about 2-3 months after the change) and by locating your VIN in the list and interpolating you can see when yours was actually built.

The heating element won’t work unless the OP sender is connected to 12V (typically in series with the gauge). So in practice you get alternation between 12V and ground. I’ve done this on the bench; I don’t see how an ohmmeter could measure a meaningful resistance.

BTW, in this and another thread it hasn’t been mentioned that these (bimetallic) OP transducers were designed by Smiths to include a voltage regulator function. In effect they contain their own IVR, which is why the OP gauge goes directly to ignition voltage, not to the IVR.

The design is rather ingenious, but obviously at the price of reliability. IMHO.

It’s curious that the dependence of resistance on pressure that you report is opposite to what you would need to actually operate a gauge (increasing pressure indicated by decreasing sender resistance; shorting the sender wire to ground pins the gauge to the right).

BTW, the senders I’ve tested (for both 60 PSI and 80 PSI gauges) and refer to here are from early E’s, Mark X, and early XJ6. They look just like the one in your photo but maybe there’s another type out there.

As Robert says, this doesn’t sound like the standard oil pressure sender described in the Service Manual. Even if your multimeter in Ohms mode supplied enough current to operate the heating coil you would expect the resistance to decrease with increasing pressure, not the reverse. Something isn’t right here…

Lots of discussion about this lately. Some have suggested adding a mechanical gauge as a backup or check-point. (usually under the bonnet, as Lynn G. suggests). A very workable idea.

However, my approach (and that of others) was to change the main panel gauge to mechanical. You’d want to find a Smiths mechanical gauge that looks close enough to the original that nobody will notice the difference. If I remember correctly, mine may have been one that was correct for a Triumph TR6. The rest of what you need (including the coiled nylon line or tubing) can be found at your FLAPS. Install it carefully to avoid problems, and drive happy!

Hi David, Robert…opened up the sender and it is as in the manual, a pair of points with a 14 ohm heater wire around one of them a 120 ohm resistor across the pair…how i got those increasing resistance measurements yesturday i have no idea, and i checked them several times by adjusting the air and got the same each time…on the bench today i set to my oil guage and an old sender (as in the photo) to a 12v battery…and to the compressor, bearing in mind this is not a matching pair so dont expect acurate results…at 15psi the lower point moves up touching the upper point and i slowly get a reading on the guage…increase pressure and the points are pushed further up, heating element is warming and the guage reads higher, the more pressure the more the points bend and guage increases…the heating element is bending the upper arm…reduce pressure the lower point drops, contacts are open, so no circuit, guage starts to drop and the heating element cools down, and with no heat the upper arm starts to straighten and in doing so lowers…increase pressure again lower point moves up mskes contact and do on…in the photo there is a small brass pin that you can adjust the points with… 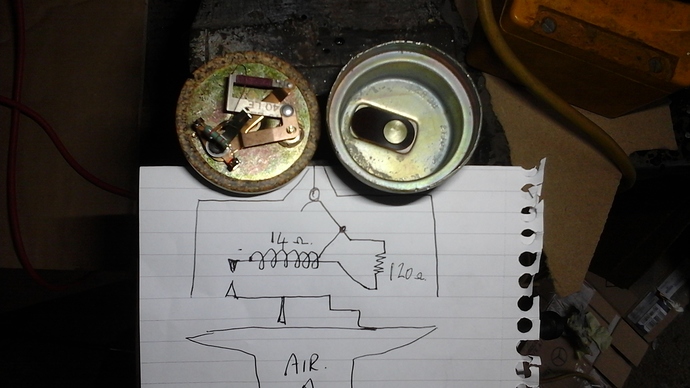 Very cool! You can see from your nice diagram that the sender is very similar to an IVR. Ignoring the OP function, it’s set up so that the heater loads the input voltage (coming from ignition voltage passed through the gauge) and in doing so disconnects itself via bending of the bimetallic strip as it gets hot. If ignition voltage is high, heating is faster and duty cycle is reduced, and vice versa. So the effective time-averaged voltage supplied to the circuit is regulated. This works only because the bimetallic instruments are so slow.

I tested this on the bench, similar to what you did except with a regulated power supply to provide the voltage, and an ammeter so I could observe when the contact points closed and opened. I tried about 10 Smith’s OP senders, of which about half worked. With a working one, I could set the voltage to, say, 13 volts and vary the input pressure (from a N2 tank) to test its operation. Conversely, I could set a pressure, and then vary the voltage to test how well it regulated against change in voltage. They worked perfectly, giving the same (correct) pressure reading over the range of 9 to 14 volts IIRC (this was years ago).

I suppose these were made for use on cars without IVRs–otherwise a resistive unit would suffice, like the temp or fuel sensors. Anyway, Jaguar eventually started using gauges that didn’t require voltage regulation, and these odd critters became obsolete. Although a PITA, I think they are very classy and very Jaguar.

Thanks for all the info and help,

I grounded one connection on the gauge, it went up like it should so the gauge is fine.

Didn’t feel like pulling off the sender yet so I hooked an ohm meter to the wire on the sender and another at the gauge. To my surprise, I had no connection.

Wire at the meter is white/brown, the wire at the sender is black/green, that doesn’t sound right.

Went back thru the wiring and found a spare white/brown wire by the coil that I thought was for the old original distributor. I now have an electronic XJ6 distributor and don’t use the original wire. Turns out this is the oil sender wire. After hooking it up, oil gauge works fine. pressure is around 55 lbs at cold startup.

Must be those glasses you’re wearing! Lol!

I doubt it. In my 3.8 the only black-green wire I see goes between the Otter switch and the cooling fan.

I believe the 4.2 its black/red for the otter switch.

My ac isnt working so thats the next place to look but the spare wire isnt long enough to get up front by the relays so i dont think that could be it. The wire comes out from the passenger compartment wiring loom and just made it to the oil sender/distributer area. Can’t figure out what else could have hooked up there.

Looking at my Series II wiring diagram I see a green/black wire goes to the temperature sending unit.

Shows Green/Blue on mine.