See below- seems previous owner converted to electric distributor. Car runs fine but seems to have a battery drain. Thoughts? And what are the exposed wires for? White/ black stripe. Can I cap those or…? One on top one on bottom. Thx. 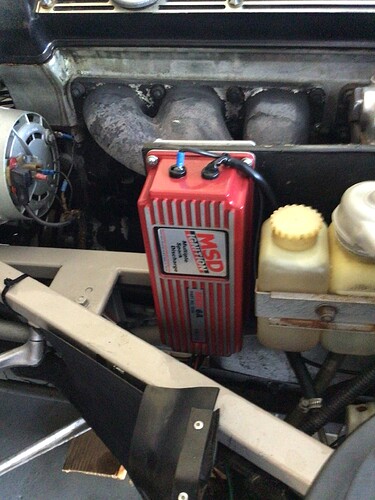 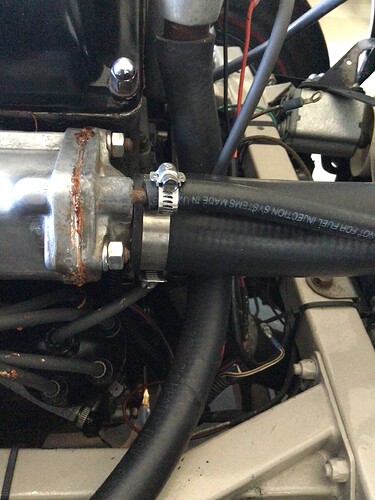 That’s a pretty hot place to mount that electronics box. I would move it away from the exhaust side.

Interesting - these MSD boxes come to us from the 70’s and 80’s and like others in that period involve voodoo spark magic. The idea behind the MSD was the creation of multiple sparks on each cycle, I guess that if the first spark didn’t ignite the mixture one of the next two would. It worked mostly at idle but dropped off as rpm rose - you know when you really needed it. The points worked as a trigger for the box, low voltage and amperage, with no arcing so they would last forever, or until dirty, but the accuracy of the box was subject to the same foibles that worn distributors inflict on stock systems. They are very common on period race cars, but when we were running dyno tests on my 365hp race engine, and tried one of these systems out on it we lost 16hp. As usual the question remains - if they worked wouldn’t a major car manufacturer pick it up - in those days they were desperate for things that actually improved how engines ran?

Anyway Chris it’s not an electronic distributor - I don’t know what the wires are for - don’t remember how they were wired, but I’d bet you can find a wiring diagram for it online that will tell you what they do.

So would I be better off just trashing that n going back with points? The big black n red box ruins the period look of the engine bay I feel.

Hi Chris. I’d deep 6 it, and install a Pertronix module. If you get into this make sure the distributor is working properly. Make sure you can rotate the shaft a few degrees - that is that it’s not gummed up. The rotation of the shaft is the weights that advance the dist moving - that is to say they are not stuck. Your car is a Ser II and probably doesn’t have a vacuum canister??

I had one of those on my ‘66 ‘S’ when it was running dual fuel, (CNG) at the time I think I was told it changed the timing when running the different fuels, this was a long time ago (late ‘80’s) so actual information lost in time.

You may want to do a search here on “123 Distributor” and read some of the posts. After too many issues with Quality Control on points/condensors, etc. I ignored my gut and went along with my shop’s recommendation to go with a Pertronix unit. They claimed that all the bad things I had read about them were ‘in the past". So I had the P unit in there for five years and it died Aug. 2, fortunately I was in town and just about 4 miles from home. A friend races P1800 volvos and strongly recommended the 123. I also read up on them at Jaguar Forums. https://www.jaguarforums.com/forum/e-type-xk-e-59/thoughts-123-distributor-bosch-red-coil-249899/ and posted asking for others’ thoughts. One issue with the Pertronix is that you cannot leave the ignition on (not run) to test things, it will fry the module. No such issue with the 123. The 123 comes in black and looks just like the original distributor. I ordered the wires and coil to go along with it, so there were no questions about parts playing nicely together. Car starts and runs wonderfully, now just need to get the new aluminum radiator in.
https://123ignitionusa.com/

I priced out a new pertronix for my 67 e type today. R u kidding me?

Don’t keep us in suspense, how much are they asking?

It looks as if I can advance or turn the distributor by hand some even - prob the lock nut isn’t tight- car runs n starts great. No smoke. I plan to have the “best” guys in town check that, bleed brakes, align front n balance tires n check suspension. I changed all other fluids n filters- boy that fuel tank sump was cruddy n filter crumbled - I just got one from Moss n plan to replace ASAP. Thx guys! 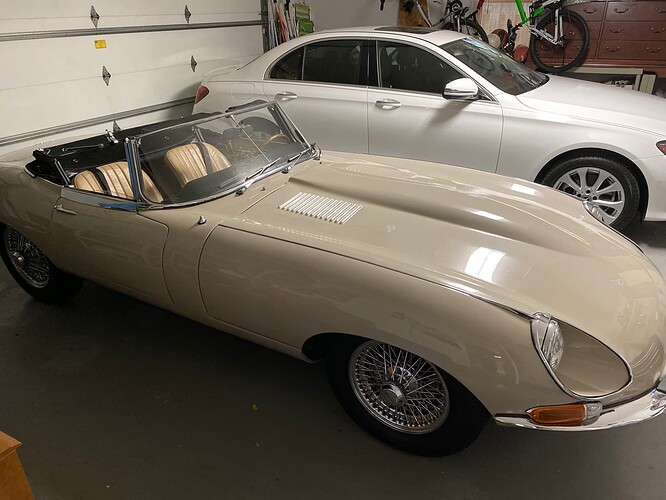 Thx- the vacuum line off my distributor was just left open- odd because that vacuum was critical in my American muscle cars advancing things under acceleration.

There are several generations and models of MSD 6, so this is my best guess. You can’t trust the current install sheets, for the same reason.

The connection on the left is likely a tach feed. You can’t use your tach in the normal way with an MSD, so you probably have an MSD tach driver hidden somewhere behind the dash, or the tach had some sort of internal conversion. I suspect that if you look under the dash, there has been a mod to the tach wiring

The large bundle has several wires. There’s a heavy red that should go to the battery, and a heavy black that goes to ground. There’s an orange/black pair that goes to the coil, orange to positive and black to negative. there’s a small red wire that goes to switched 12V, usually it’s connected to the old tach wire, which should be disconnected from the coil +. Then there are two trigger wires. The white is for points, and the violet would only be used if you have a hall effect pickup. there may be another terminal instead of the violet wire. There’s a funky plug somewhere on the box for switching the number of cylinders.

This is a decent system, but depends on your distributor being in good shape. It will perform better at low RPM’s than high RPM’s, because there’s less time for multiple sparks as RPM increases. So at the top of the RPM range, you have just one spark. You can convert your distributor to an points eliminator like Pertronix, Crane or Mallory. This will improve reliability, but won’t affect performance one bit.

Unlike a Kettering ignition, the coil is driven directly by the MSD, rather than by current passing through the points. The coil primary isn’t used to store energy, it’s just used as a transformer. Because of this, you may find that a very low impedance coil works better for your than a standard coil.

For the first time I posted off my phone, got partially throu the message and thought - Stop whinging, and tried to delete it. Big fingers, small “buttons” and wound up posting it. Will stick to the laptop or desktop in the future. I got a quote from a supplier in Canada for $204 cdn plus shipping. Summit wanted $138 cdn plus $50 cdn for shipping, Moss is $160 cdn plus shipping which would probably be $50 bucks. You, used to buy these for under $100 cdn. These have been around for what, a half a century, development and engineering long paid for - why are they so expensive?

I think I paid about $150 for my Petronix distributor from Amazon, with free shipping.* But I live in that country immediately below yours. If you guys order from Amazon do you get free shipping on orders over $25?

*Which really isn’t free, the cost is just rolled into the price of the product.

Thx guys. My e runs so great tho- starts great, runs great no smoke misses etc - I hate to mess with something that works well. Maybe if it breaks?

Oh- can anyone tell me where the vacuum on the distributor hooks up to? In my old American cars it would hook up to intake on the carburetor. Thanks

If you guys order from Amazon do you get free shipping on orders over $25?

I have Prime, so all orders are shipped “free”, regardless of cost, but the greater benefit is Prime Video subscription that comes with it.

Oh- can anyone tell me where the vacuum on the distributor hooks up to? In my old American cars it would hook up to intake on the carburetor. Thanks

Normally the front SU carburator in the triple arrangement. Since yours is the Z-S setup there’s no existing vacuum takeoff, so you’d have to put one in.

Would that help? I did “clip” the vacuum on the distributor- really no change as the car idled n accelerated great before. I do plan to have the shop next week check the timing n set that right. Thx again Nick!

Your car is a Ser 1.5 which had several distributors from the factory, some with and without the canister for the vacuum. I can see from the photo that your car has one. Make sure your mechanic checks that the vacuum is working and actually turns the plate the points run on

Don’t know. But if you want to experiment with it then it’ll need a vacuum source.