I drilled and tapped 1/4" npt hole in my cam cover for new pcv system. I have a 1/4" npt to barb screwed in, which will feed to air filter box for breathing in air to the crankcase (this is similar to Dave’s setup)

Problem I have - the cam cover is only 5mm thick, and for clearance with timing chain pulley, i cut the male npt threads to about 5-6mm so its almost flush on the inside. But there is not enough depth for npt taper threads to catch, so it screws in all the way. I can get it nice and tight like this, but i want to put something on the threads to keep it from ever vibrating out, and of course seal well.

I was told blue loctite won’t work on npt threads?
I was told to just use a lot of teflon tape?
I don’t want to use something like JB weld, don’t want it so permanent.
Is there something else i can use? Or should i just put a lock washer on it? Or copper washer?

Of course, nut on other side is out of the question. 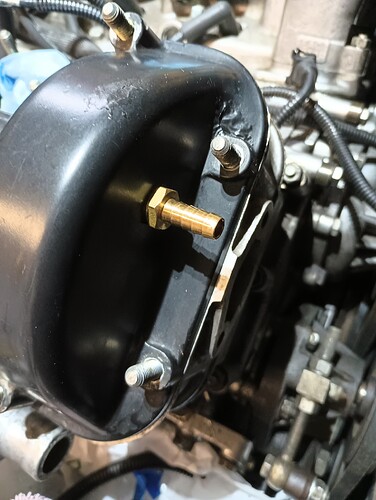 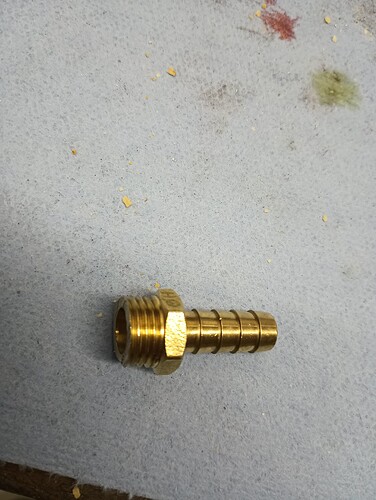 Why do you need another PVC set up??

Long story, some posts a few months ago talk about it. I just want to try.

May have answered my own question…

Loctite 567 is for pipe threads.

Pipe dope should also work as it is made to be used on tapered threads.

That area is in a lot of oil splash/mist because of the chains. Without a inner shield, you can expect a lot of oil to be sucked into the fitting.

The flow of air will be going into this hole. It is providing the inlet for crankcase air. Intake manifold vacuum will be pulling on opposite cam cover.

I can tilt the rubber elbow up so any splash will drain back, when there is no vacuum on crankcase. I may try old fashioned valve cover breather filter so its at atmospheric pressure at full throttle.

I will be measuring, but I’m hoping for 1-2 psi vacuum on crankcase.

And i originally was thinking of tapping hole over by middle of cam cover. I’m starting to think that may be better?

There are actually npt nuts that are pretty thin. Maybe you don’t have enough threads sticking thru. If not I’d JB Weld it.

In any case too tight will crack the cover quickly.

I’ve decided to abandon this.

I don’t like messing around with non-oem things beyond my expertise.

I have access to another cam cover before I paint, so no unsightly plug.

I’ve decided to abandon this

I expect more from you. You’ve seen all episodes of the “Friends” tv series, hence you should have more experience with thread types and its applications. The ultra-flow-monster that you’ve installed would be a good for submarine’s diesel cam cover. I assume you’ve got megaPascals of pressure iside your engine - hence NPT thread as a weapon of choice. Just make sure your dip stict wont fly through the back of your head when checking oil level… Just saying.

Now wipe your tears and buy something like this: 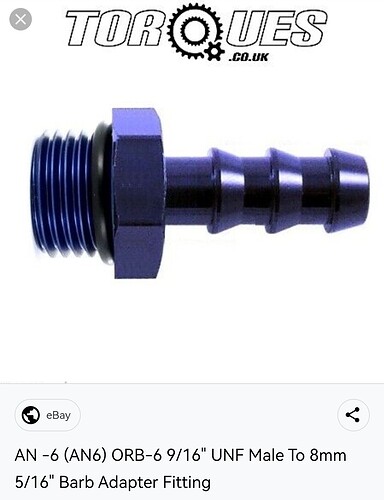 9/16 UNF has the same pitch, different thread form and is slightly bigger than your ‘ultimate’ choice NPT. Depending on how you’ve “threaded” it so far - it should go in with slight resistance or will require 9/16 UNF tapping. If you don’t have tap (Master of Half-Measures badge) or don’t want to have swarf inside the engine - use 9/16 bolt with some kind of cutting liquid first, them put the adapter in.

I can’t offer any suggestions on the why, but as to the how just Araldite it in place.

Teflon will work just fine Greg.
It will seal without having to tighten the hell out of it and will give some resistance to the threads.
And if you are still worried, I would go with Janusz’s idea.

But, you know, little goes a long way.
Isn’t teflon increasing the stress on the casting by making the thread slipperier? Something to worry about?