I have an occasional gripe with my SII which I would appreciate some help tracking down. Haven’t found quite the same issue on the forum.

I start the car from cold, run with some choke which I progressively reduce until reaching operating temp, which is usually within 5 mins or so. I am running well, but then I have to slow down or stop for a light or a junction, so throttle off. When reapplying throttle … no response, revs don’t pick up and feels like I might stall. Adding more throttle will then result in a sudden gain in power after a second or two and off I go - but this can be a little hairy if, for example, I am in traffic and there is something in front of me as the speed pick up is rapid and unexpected. I have learnt to compensate for this crudely by applying a little choke as I decelerate, which overcomes the issue by keeping the revs a little higher. Once on the move again, I kill the choke and everything is fine.

This issue disappears after some time, it seems once the engine is really nice and hot. But this might be 45 mins or an hour of driving (and not simply once the temp gauge is showing running temp).

Any ideas as to what might be causing this “stickiness” appreciated as ever. Carb? or a throttle cable issue? or fuel pump??

Weak something or other. If Canadian spec is like US spec I’ve never worked on a twin Strangleberg XJ, only Federal E-types so equipped. With E-types Canadian spec was always triple SUs I think.

Anyway, whether true choke or AED ‘starting carb’ it sounds to be set too lean. Try enrichening your ‘pilot jetting’ or whatever you have.

Hi Nick, this could be alot of things but have you ever tried switching tanks when it’s happening? Or does it happen from both tanks? As Peter suggested it sorta sounds like a fuel issue… You could have a failing pump, clogged filter, etc.

Also you said you’re manipulating the chokes so is this a water choke car that was converted to manual or just manual choke strombergs?

Is your ignition system standard points or does it have a pertronix system or the like?

Your symptoms could be multiple things. Need some more detail about the car.
~Mike

Manual choke conversion. Changing tanks does not make a difference. 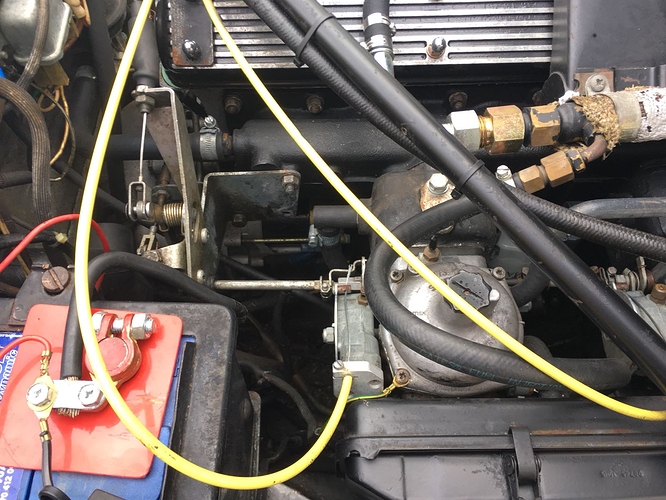 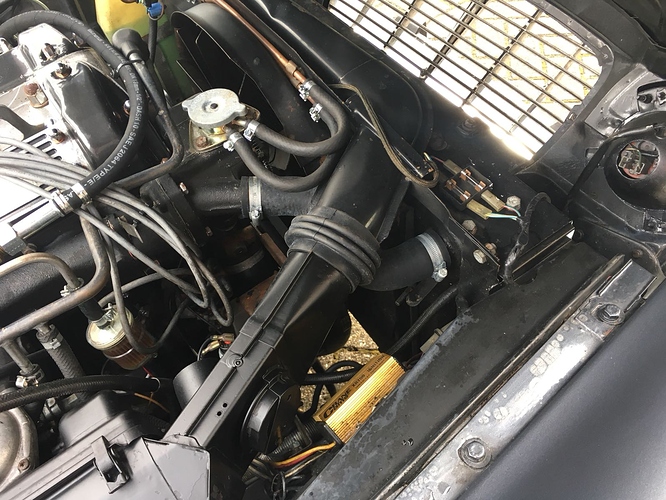 Did you drive it before the conversion, and if so, was it stalling then? Follow the logic path revealed by your two answers and you will start to home in on the cause.

No, conversion was under PO. I had the carbs tuned though since as they were running very fat. But it’s true others have previously said based on CO emissions (see below) it might now be too lean, although as I say the issue does not occur once thoroughly warmed up:

I had the same issue with my Series II.
for me, it was caused by (federal car)

The fix was rebuilding the carbs. Essentially what was going on, with the choke on, enough fuel was supplied to the engine to over come the vacuum leak caused by the worn needle and tear in the diaphragm.

I also replaced the fuel pumps because at speed (like on the freeway) the fuel pumps couldn’t keep up with the fuel demand, and the engine would start missing. I went with two universal (external) electric fuel pumps. Be sure to check the fuel (pump) psi output should be somewhere between around 3.0psi no more than 5. Must be for a carb configuration with a max of 5psi I put in a fuel regulator in as well, just for giggles.

Had similar problems with my 2" HS8 and manual choke. Cooling system totally renewed. Carbs rebuilt. Tuned HS8s fairly lean to start, gradually lowering jets until it ran well when warm. Then noticed after driving for 5 minutes or so with temp gauge on normal, car would stall if I came to a stop. Pulling choke was the answer. I diagnosed this as the thermostat opening and sending a slug of cool water into the engine. The mixture was right on edge for stalling. Turned the crews down another 1/4 turn and all runs well now.

Ah! How stupid of me. I forgot you were in France.

Next time you go out, use only quiet roads (Peripherique?) where it doesn’t matter if you suddenly stop. You must act as if you don’t care. Vous êtes en colère contre votre chat et elle le sent.
At the moment, when you sense she is about to fail, you are asking “What’s going on, PLEASE?” And all you get is a Gallic “BOFF!” from the air cleaner and she shrugs and stops.

You must act unconcerned and walk away. She will soon feel lonely and scared as cars come past and they whistle and shout at your beautiful girl in the street.

Soon it will be your cat who will ask “Qu’est-ce qui se passe? I am so stupid - even his bicycle is not left in the street.” She will come home and you will be her master again.Then you can love her and buy her beautiful things and wander together in the Bois de Boulogne again and your ‘chatte’ will be yours forever.

Apart from the normal carb issues and solutions others have mentioned, these water choke manual conversions can be problematic if they are adjusted incorrectly. The water choke itself has multiple components that are still functional even with the conversion. I believe they still have the thermostatic spring in place as well as the fast idle pin and the enrichment metering needle.

One thing that can be a problem if the thermostatic spring is in place is that it isn’t adjusted out correctly and it still has an effect… It shouldn’t with the conversion.

it might now be too lean, although as I say the issue does not occur once thoroughly warmed up:

**
You are indeed running the carbs too lean for the engine’s liking, Nick…

Carbs are crude devises, and as the xk engine doesn’t like running lean; it’s advisable to ensure that the carbs are set up fat. As carbs should be adjusted fully hot; your 1,36% CO is satisfactory for a fully hot engine. However, at lower engine temp, ie before the engine is thoroughly warmed up, this set mixture will cause engine discomfort…

As it takes some 20+ minutes of driving to fully heat the engine; at some earlier stages; opening the throttle will initially lean out the mixture further - and pulling the throttle will fatten the mixture. During cold start and warm-up the engine needs fatter mixture as air/fuel mixing is inefficient - and increased idle to overcome cold engine drag. Both provided by the choke action - whether ‘plain’ or AED manually or as originally configured.

There might be other contributing factors, like an air leak (throttle spindles), or idle set too low. Or carbs not performing perfectly - they are ‘analogue’ devises, subjected to minor variations. Or the engine requires more power due to wear and tear - or whatever…

Thank you all - will have carbs adjusted next time in the shop.