I bought my '63 S-1 FHC from family in 2003. At the time I lived in Safety Harbor, FL and they was a Jaguar guru who had a big shop downtown fill with all sorts of parts. He had a great deal of knowledge. His name escapes me at the moment. He sold me several Jaguar parts including this Oil Filter/Oil Cooler base EAC3146PA that I believe came from an XJ6? the aluminum foil is covering up the cooler hoses. As I am getting ready to start the engine for the first time, I need to use or loose this part.

It does allow me to use a spn-on oil filter. Is it useful to adapter and oil cooler to my E-type? 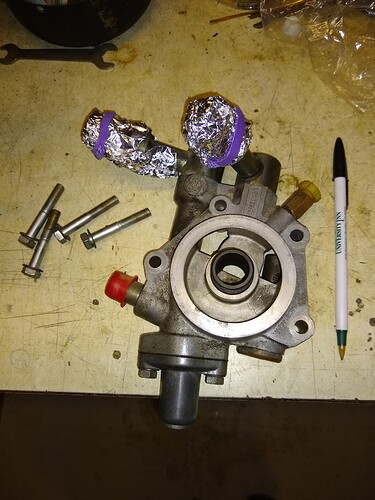 If you are going racing, yes. Other wise an oil cooler is an unnecessary expense/complexity. There are 9 quarts of oil in the sump. It takes forever as it is to get the oil up to temp, even on warm days (I ran an oil temp gauge temporarily for a few months to get an idea about oil temps. Highest reading I saw, on a 4 hour drive in 105F weather was 225F, well below the level of concern for oil breakdown.

Spin on filter conversions are available for many sources for the stock filter adaptor.

It does allow me to use a spn-on oil filter. Is it useful to adapter and oil cooler to my E-type?

If you decide to use the filter head be aware there are multiple gaskets for it and choosing the right one is important.

What the other guys said. I have the plain Series 3 XJ6 filter head on my '62 - takes a spin on. The brass pipe union in the upper right part of your picture would have to be closed off. It’s the cam oil feed line connection for the later XJ6 cars. Your cam oil line will come from the LHS bottom rear of the engine block. Paul.

Okay. Thank you all. I’ve had this on the engine since 2003, just never went beyond putting a filter on it to keep out the dirt. So I’ll go with the following:

Again, thanks to you Gentlemen.

Post a photo of the backside of the filter head, and I might be able to identify the gasket and fittings.

John, any idea what the part number is for the pipe bridge between the oil cooler ports?

I spent some time looking in the archives last night and couldn’t find it the part number, although I know it’s been discussed before. Perhaps one of the salesmen at SNG Barratt knows. I’ve always found them quite willing to share their knowledge. You might also ask at Welsh Enterprises and Coventry West (Dick Maury); both have quantities of used parts from a variety of Jaguars. Many folks, including myself used a loop of reinforced oil hose to form a loop between the two cooler fittings. Use good hose clamps.

And if no one here can identify the proper gasket I’d bet Dick could help you there as well.

Thanks. Here is the backside. I’ll go get another photo of it square on. 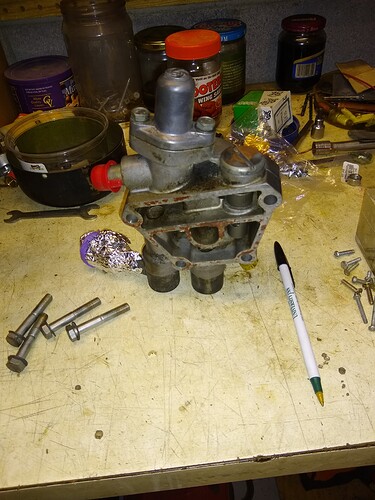 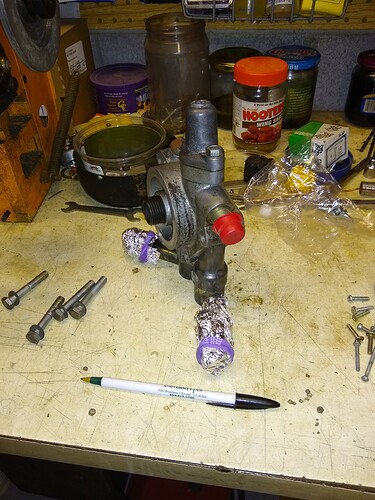 I did buy Dick’s CD with his rebuild. He is actually just 125 miles from me. I have found the CD to be very informative. 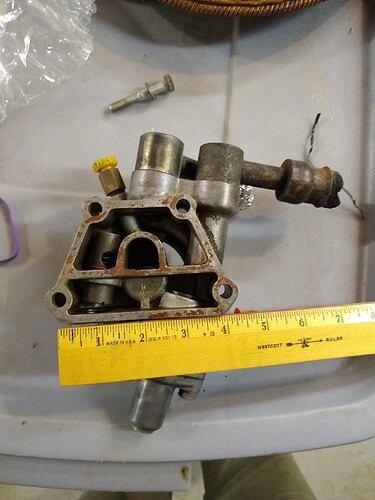 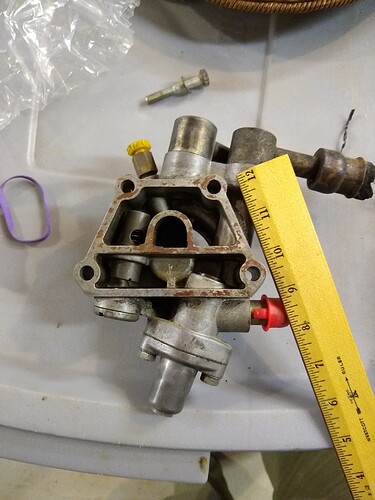 I installed a similar filter block on my engine and simply made the gasket by placing material over the mating surface, gently tapping all edges with a very small ball peen hammer and cutting it out. Worked a treat!

This gasket should work, but you’ll have to trim off the bridge:

I’ve ordered the gasket. More importantly I fiddled with the hoses for some time thinking I’d make a loop out of them. Then it dawned on me that I can simply remove the two hydraulic connectors and put 1" freeze plugs in the holes. Use a little sealer and I’ll add an O-ring for good measure and peen the edges with a small, sharp square punch. I don’t see any reason why the oil has to connect to the two chambers in the filter adapter. What I’d be doing is no different that closing of the lines to the cooler. Nice and neat, no hose sticking out over the filter when done. Here are some pics. 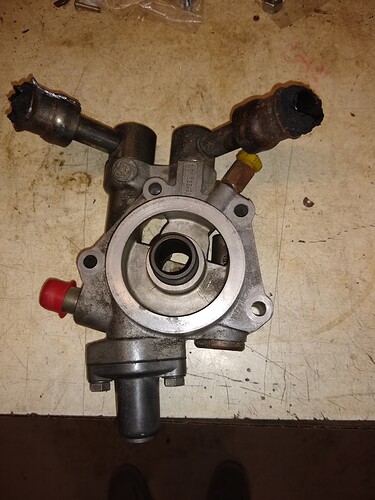 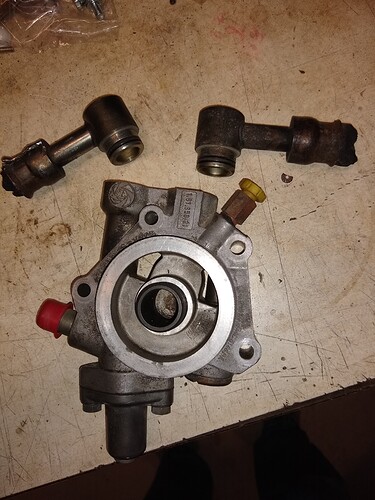 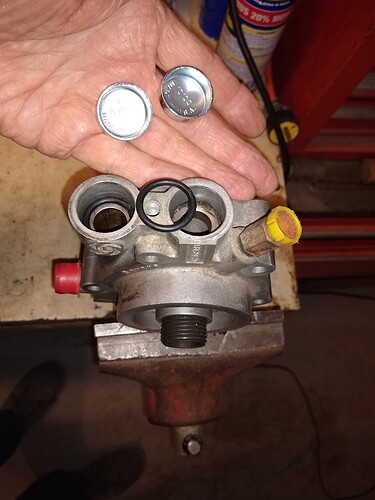 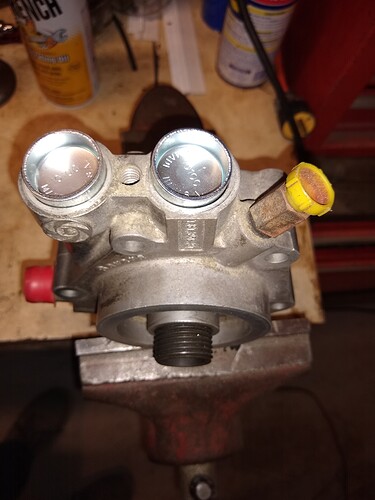 I forget the details but IIRC, that’s a no-no without removing an internal part (see below attchment) . Oil circulating through the cooler (or a hose loop) is part of the overall operation of the filter head. Closing the ports off impedes the flow.

In reply to a message from cadjag sent Thu 3 May 2012: Thanks to all the help I think I’m homing in on the source. But I cannot find the archived threads detailing the following: Exactly how to block off the oil cooler ports. How to modify the oil bypass port to send to the oil pan. Is the oil pressure sender port the same size and thread? Any gasket issues or just the standard e-type gasket? Any answers or links to the threads would be appreciated. Thanks again,– The original message inc…

I was wondering about that. But boy!, that is quite a disconnected thread. Here are the basic questions asked:

So, choosing the option to close the cooler ports with a freeze plug (someone else did it with a copper plumbing cap) then per the answer to 1 above, I need to remove an internal part of the filter/cooler adapter. But there is no mention of what or where that part it. Can you recollect what that was John? My freeze plugs will function exactly as your “brazed shut” cooler pipes. But the internal part to be removed from the adapter eludes me.
Then you modified the fitting on the pan that accepts the bypass oil. I do not see that as an issue; I’ll simply make a copper or steel pipe to connect the two.
The remaining two questions concern using the oil feed to power an mechanical oil pressure gauge. I like this idea, but that is for a later time. The last concerns the proper gasket and I think Michael Frank has already provide that answer an it’s on order.

The question then remains, what part of the filter housing do I remove so as to equalize the pressure between the two ports?

From Robert Wilkinson’s post in the attachment I provided above:

Note that you should remove the bypass valve
within the filter block to allow for full flow of oil with
the oil cooler blocked. Otherwise, the oil pressure rises
due to the blocked cooler, opening the bypass valve, but the
open valve still restricts flow compared to removing it
entirely.

Ahh. I read that but didn’t understand it. Now it seems obvious that if you block the two ports, the bypass valve will open however even the opened bypass valve restricts oil flow. The bypass valve itself must be removed to all full flow. Got it.

What is the issue of trying to make a straight line between the filter head and the fitting on the pan. I understand what you did, but I don’t know why it is significant.

d, but I don’t know why it is significant.

On the original filter head the discharge that goes to the sump comes out at the 6 o’clock position, pointing directly at the fitting attached to the fitting on the sump. So just a short straight section of hose is needed, albeit one with different sized ends.

On the screw on filter head I used the discharge came out at around the 9 o’clock position. To connect the two I had to reconfigure the fitting on the pan to make it possible to get the hose on it.

Then it dawned on me that I can simply remove the two hydraulic connectors and put 1" freeze plugs in the holes. Use a little sealer and I’ll add an O-ring for good measure and peen the edges with a small, sharp square punch. I don’t see any reason why the oil has to connect to the two chambers in the filter adapter.

I can see a couple of potential problems with this approach. The plugs are steel and the housing aluminum. This leads a difference in thermal expansion. O-rings placed behind these plugs will not be in compression, as the originals were on the hose ends. Simply staking them in place puts you at risk if they walk their way out, again from thermal expansion and contraction cycles. The only way I would trust something like this is to put a metal bar across the two with a bolt in the hole between them. I would also think very carefully about the oil path and if the filter has an
internal relief valve or not? I know in the series II 4.2, the filter bypass valve was in the filter block and not the filter.

The only way I would trust something like this is to put a metal bar across the two with a bolt in the hole between them.

One can easily do that, by using the bar that holds in the nipples.