Oil pressure not coming up

So, at least the pump is working. I’m still not sure why it wouldn’t prime until the hosing was removed. But I’ll keep adding parts back and testing 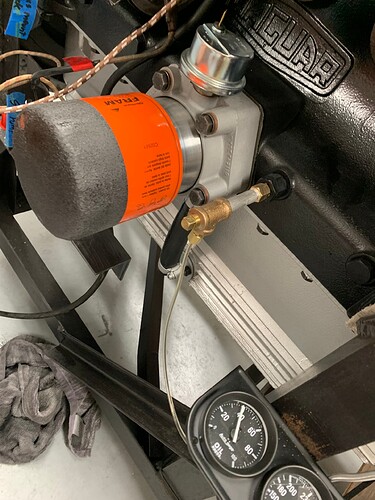 I’m still mystified why with all the same components and nearly 5 minutes (all told) on the starter with zero pressure, it didn’t start pumping oil until the housing was removed from the block.

But I’ll take it!

Great news. I have no great theories. You had the plugs out correct? Maybe it was spinning a bit slower because it’s all new and tight. Do you have particularly heavy oil like 20/50? That stuff is like paste until it gets warmed up. I’m not using it any longer.

So, precisely when does it cold enough in Austin to have that be a concern?

It’s all I used in Tweety and all I use in Margaret, and except on the coldest days – 10F, and below – they both cranked over.

Yea, it gets a bit thick, but from 30F and up, should pose no real issue.

I’m still mystified why with all the same components and nearly 5 minutes (all told) on the starter with zero pressure, it didn’t start pumping oil until the housing was removed from the block.

To answer my own question (and Erica’s-yes it is 20-50 oil but 80 degrees in the shop), I believe the root cause of my problem was pre-charging the oil gallery while having a completely air-bound pump. It just couldn’t pump enough air while opposing residual back pressure from the gallery pre-charge. When I pulled the housing and drained the gallery, it primed within 20 seconds.

It was recommended by the guy that rebuilt my lower end not to use it, and that there was no benefit to using it. It takes longer to come up to pressure than is necessary. I also ran it for many years but stopped.

Rick,
Your theory is correct in my opinion. It could not pump air out of the pump and thus suck in oil.
Dennis
60 OTS

I also ran it for many years but stopped.

Did any harm result? If not, I suggest that, proper use of it is not deleterious.

Proper use = hot weather, and in engines, like ours, with looser tolerances.

Aldo, “coming up to pressure” is a bit of a red herring.

Now that you have primed pressure, as Wiggles recommended, start the motor! Keep it at an idle speed, not exceeding 1,000 rpm. After operating for about 10 minutes shut it down, drain the oil and remove the oil filter. Inspect drained oil. See anything unusual (like a bunch metal specs)? No, then cut open the oil filter, inspecting the pleats for any contaminants (i.e. metal). There may be a spec or two from the break in from the bearings but should not be a large amount of metal. You’ll notice in the Jaguar Factory Film after starting each motor the oil is drained and new oil added along with a new filter. Cheap insurance!

When my '71 V12 2+2 experience a spun bearing there were LOTS of metal shavings in the oil!!! That’s when I developed my “never buy first year production”. I call it “Year One Beta Testing”.

I doubt you’ve done any damage but a close inspection of initial start-up oil may give clue(s). The longer break in period is more for properly seating the piston rings and valves. Lots of controversy on that subject. Early on excessive rpm’s will lead to problems IMHO. Also, don’t lug the motor (i.e. 4th gear in town at 25 mph). Use gears to keep the motor rev’s up within the recommend break-in period.
The motor was well designed, failures usually occurring from taking short cuts (reusing rod bolts, etc.). It was good enough to power a British tank! Ha Ha

Thanks for posting your experience. Lots of great information for all enthusiast.

Now that you have primed pressure, as Wiggles recommended, start the motor!

I would love to start it, but something(s)'s missing. 10 points to the person that spots them all. 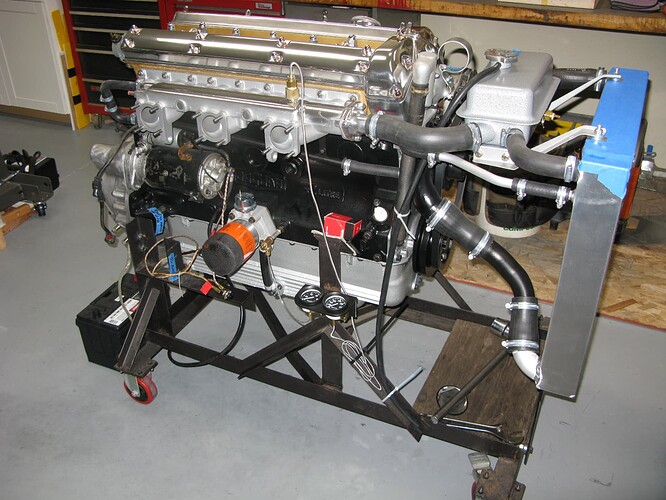 Thanks for the start up procedure though. Hopefully that will be soon.

Back in the day when rebuilding triumph engines for my TR6’s I would fill the oil pump with Vaesline oil to create a suction for oil to be sucked into the engine. The pressure was almost instantaneous and it did without any delay challenges …

Just ignition: a squirt can with fuel, and it’ll run!

You were lucky: I never would do that based on a couple of experiences of other mechanics wayback when, they did the same thing and a plug of Vaseline clogged up crank and destroyed the engine. The only assembly lube I would ever put on bearings or an oil pump was oil, or Lubriplate 105.

Makes for extensive break in effort.

Should never need that to have a pump work …. Presumably the pumps were not rebuilt

About an hours work re-installing the intake/carbs plus the Dizzy/wires/plugs. Then let her rip!!!
Put a BIG industrial fan blowing thru the radiator… let the show begin!!!
Enjoy,

Put a BIG industrial fan blowing thru the radiator

Yup, that’s the final piece. Here’s the setup used by the guy who gave me the test stand. 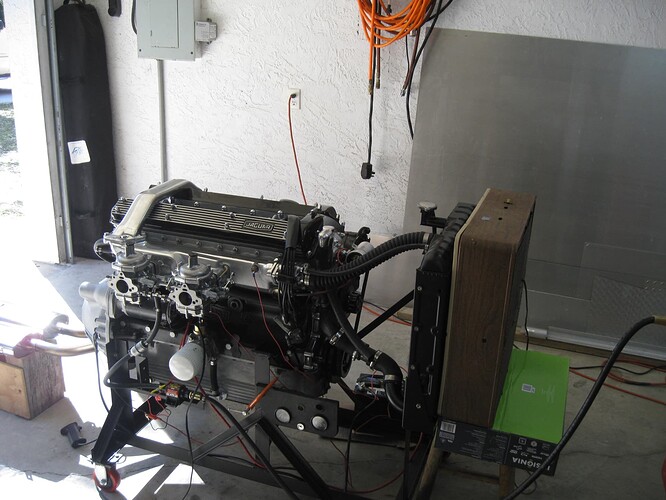 Proper use = hot weather, and in engines, like ours, with looser tolerances.

I am another proponent of Castrol 20/50 at least in Texas type climates. As I rebuilt my 3 Vega engines (yes the aluminium block ones that have the poor durability reputation) between 1984-1992 I switched each to 20/50. I did a valve job on the 1984 engine after 120K+ Houston city miles but otherwise have not touched the innards on any of them. When I bought my E in 2000 I asked what oil it had and was told Castrol so I have always continued with 20/50 in it too. I do not think it has ever been apart but only has about 60K miles so it still a youngster mileage-wise compared to my Vegas. Still good oil pressure and little oil usage in all 4 of my engines. I always make sure my engines run cool and am always gentle on them until fully warmed up. My 2 cents.