Oil pressure off the scale and oil leak at filter

New to Jag ownership. I just bought a 1968 420G that stood still for more than a year with significant oil leak issues (hence cheap!). However, it does need fixing as I want to drive it!

I took off the oil filter housing and cleaned it. Pressure relief valve seemed operative with a new looking spring and copper ‘head’. Housing went back on the car with a new gasket.

First issue: upon switching on ignition, oil pressure gauge goes off the scale even though the engine is not running. Suspect the gauge, but not sure how to check.

Secondly: major leak at oil filter when the engine runs. I changed the oil for 20-50 and inserted a new filter that came with two large O rings. The larger did not seem to fit well into the filter housing groove, so I used the smaller one and used a flat screwdriver to carefully seat it into the groove without twisting or bending it. Then put the canister to it, screwed the bolt hand tight and carefully wiggled/slowly turned the canister so it sat properly against the O ring and tightened up the bolt. I did that three times…!

But no matter how I try, I cannot seem to get it to stop leaking badly at the top. Any suggestions? The groove is clear metal with no old bits stuck, the O ring is seated properly and is not twisted, and the top of the canister has no nicks.

What am I missing, or should I just persevere? Or is indeed the oil pressure so high it forces out the oil? Should I use some copper gasket gel (I have some left over from my motorcycle head rebuild)

probably a sender short…pull the wire (no reading) and short it to the block, that should peg the gauge

DONT overtighten filter cannister bolt…~20-30ft should be enough, or something is amiss

get in there with a bright light and sharp pick, VERY easy to have an old compressed seal…they become almost metallic

next, withdraw housing from engine, and do a forensic exam on bench, the alloy housing lip is very prone to damage

there are also other parts in the filter seal assembly that are often missing, see parts diagram, without them, its difficult to seal the whole thing with correct torque in all the right places

it should seal fine with the correct parts, leaks like a sieve if something is wrong

Put this on your must have lists of easy change oil filter assemblies and leak free installations:

gent doesnt say if he is RHD or LHD

to my knowledge, a spin on conversion wont fit RHD MKX/420G,

steer column is in the way

the oil pressure reading is via an electrical transmitter (sender) normally mounted on the oil filter head. they are notoriously unreliable. as has been suggested if you disconnect the wire on the transmitter your gauge should show a zero reading, if you short the wire to earth the gauge will read full scale.
it is not uncommon for a previously installed oil filter seal to be still in the grove hence the suggestion to inspect carefully with a pick and bright light.

Thanks Gents for the replies.

I’ll try the gauge grounding and see what happens.

I am 100% certain that there is no old seal in as I had the housing on the bench to investigate the pressure relief valve, and cleaned everything and put it back onto the block with a new gasket.

I now wish I had put the canister back on the bench too, but as it is on the car now I will see if there is damage to the (inner?) sealing lip and inspect the new O ring very closely… and keep on trying.

Any thoughts on using a smear of liquid copper sealing gasket as used for sealing cylinder heads?

I am 100% certain that there is no old seal in as I had the housing on the bench to investigate the pressure relief valve, and cleaned everything and put it back onto the block with a new gasket.

ok, take down the cannister, filter and bolt.

offer up the cannister alone to the seal…u should see/feel it engage with the o-ring,

next screw in the bolt, and see if it retains the cannister nicely

they are fiddly…longterm owners tip,rarely if ever change that o-ring at filter time

I know you had no choice

I personally see no need for any sealant with rubber o-rings in oil seal situations
Whatever the problem is must be addressed, or you will have oil pissing out on the freeway

If as Tony says the kit won’t fit you can always do a remote mount like this pdf. document describes:

One could also tap an inline oil pressure sending unit into any new plumping that would be installed.

One could also tap an inline oil pressure sending unit into any new plumping that would be installed.[/quote]

what direction does your filter point?

when I looked into it, outwards was a no go due to steering column,

upwards was possible, but need a very short filter,

and downwards, I saw no huge advantage really.

Most of the kits were outward pointing

Thx, I did not know of the remote option

In any case, I have found the OEM system to be bearable, if you are careful, and DONT change the o-ring.

@ the OP, it can be very difficult to get the new o-ring to stay up in the groove, as the filter head base is conical, faces down, and the o-ring will pop down with no provocation at all, and pinch the cannister lip

if you have this issue, use grease or perhaps some silicone to hold it up in place

Don’t forget to give the canister lip a coat of oil and slightly rotate as you tighten the bolt.

I will check on this a bit later as there is snow on the ground today and its a bit cold to be messing about outside. Should be much warmer later in the week.

Thanks all for the suggestions.

I took a very good long hard look at the housing and there was some damage to the outer lip, but the inner one was fine and the groove for the O ring was also OK. O ring it still new so in good condition. I put a very little bit of copper gasket sealant on the O ring to keep it in the groove and then smeared a very little bit on the canister rim. Then I fitted it by hand and turned it until it felt it sat good.

Then I did up the bottom nut but as I was turning that I noticed the canister wobbled a little form side to side, so I think the bolt is warped. However, its as slight and once it became tight, the canister was pressured against the O ring and the wobble stopped. I then tightened the bolt to 30ft and left it so the sealant could dry.

Then I went on holiday for a week, so I won’t know if this has worked… I’ll report back in a week.

If this doesn’t work I am seriously considering either getting a new filter housing or getting a spin-on conversion. Only question; will I have the same trouble fitting the kit that holds the new screw-type canister to the existing filter housing? Looks like another O ring seal jobbie,

have u got all the parts in the pic ? 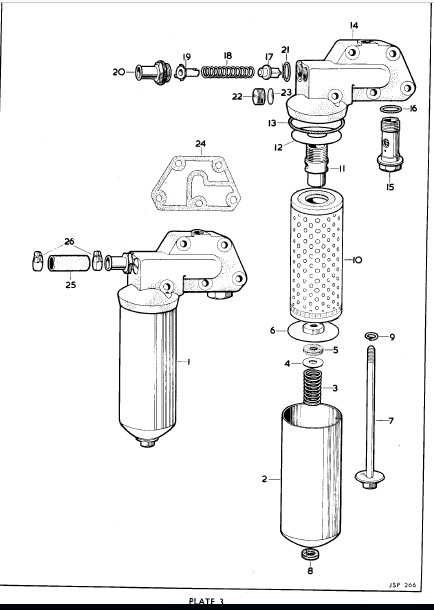 I did a few things,Part 8 can be subbed with a GM part

is your o-ring a flat cross-section style (not round) ?

does it sit snugly in the groove when offered up in the upside down position?

I think 30lb Torque sounds a but high , that’s only 7lb less then the main baring bolts , I can see issues with metal to rubber at that torque !

O ring is the correct one and fits well into the groove, no twists. Only thing I dont have is number 9 and I have the old style ribbed felt filter… but still, if everything is inside the canister, the torque pressure is on the bottom of the long bolt and the top of the canister against the seal. Number 3 makes the tension of everything else inside variable and really even without anything inside the canister it should seal.

Anyway, I’ll know more when I start her up next week.

I would be inclined to throw the felt filter as far as you can, go to the newer paper filters. Check the MG web sites, stories of the felt disintegrating.

Right, well, that did not go well.

Started her up and she ran for 30 seconds and then there was the sound of a muffled explosion… and a big puddle of oil on the floor. It was not just leaking, it had spat at least a litre of oil out at great force and there is oil all over the underside of the engine.

I took the canister off and all looked well; ring in place, no twists, no unevenness anywhere. I can only conclude that the pressure is way too high…

I don’t get it… over pressure should get regulated through the pressure relief valve and I checked that, it looked new and moved freely. Could there be another blockage somewhere? Maybe the return oil pipe into the sump? But then that would mean the oil ways from the filter housing into the engine are also blocked… can that be?

Anyone have any ideas?

I am going to take the housing off again and maybe post a few pics.

hmm suggest you take photos of the block without the filter head connected, the gasket you intend to use then the filter housing from the engine block side

suggest you take photos of the block without the filter head connected, the gasket you intend to use then the filter housing from the engine block side

agreed, there are several housing to block gasket types, the MKX is different to most

is the short rubber return pipe split or blocked ?

to check the (block) oil ways, you could try a pre-oiler, which I made using a 5litre weed sprayer and pumped an engine with oil via the plugs in the side of the block

Sounds like a oil return problem to me , after the filter.
There is only 2 main oil holes in the block , think I am right in saying they are the same on all XK engines , oil feed and oil return , if you have pressure the feed is ok to the housing , so the problem must be the return back into the block , there are lots of diffrent oil filter housings used on the engine over the years , but the 2 holes have stayed the same , chances are you have the wrong gasket to match the housing , and it’s blocking the return ,
I put a 240 oil housing on the side of a 3.4 XJ6 block , you can see the diffrence in the gaskets ,

If I am right , not saying I am , just a possibility , you don’t want to be running the engine too long , as there will be no oil getting to the cams !! 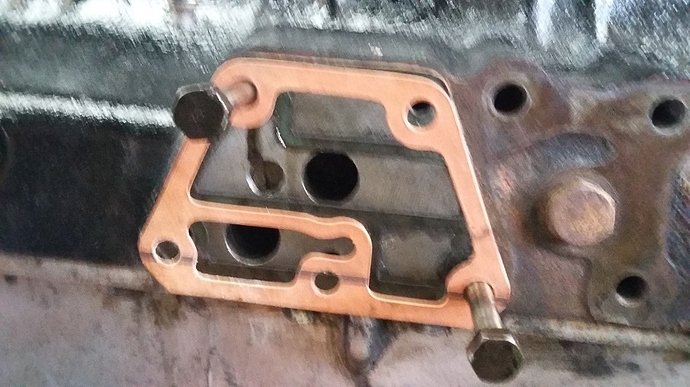 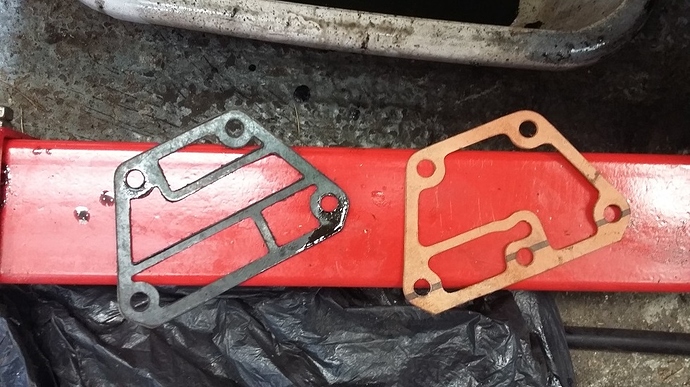 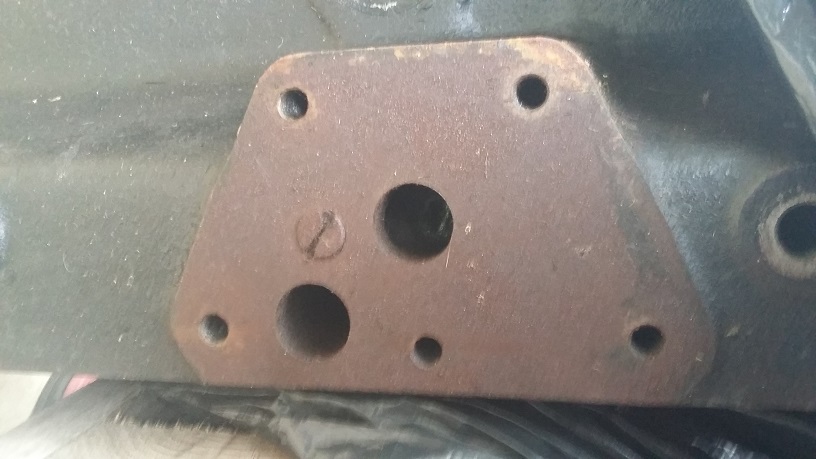