Got the car running after a cylinder head refurbishment, which included new exhaust valves, guides and seats…inlets were well within tolerance and only needed tidy up of the seat and re-lapping. Before removing the head I made a note that cylinder 3 was down a bit on compression as was cylinder 6 (front), both at 130, cylinder 1 was 135, and each of the others were 140…engine is 8:1 compression ratio. Then did a wet test and no material change. So with that + some coolant leakage and cylinder 3 also had some oil fowling on the spark plug decided to remove the cylinder head.

The water leakage had caused Cylinder 6 & 4 to be perfectly clean…no carbon build up on the pistons. The head gasket was a brand that ceased production in the late 60’s (Cogsal - if I remember correctly) …so likely had been on the car since 1964. Despite the rusted out parts of the gasket the head did not require any aluminum welding. No scoring of the bores and no ridge on the cylinders 2 through to 5, could not check cylinders 1 or 6.

I had only driven the car less than 100 miles since purchase, and before the head repair. Other than coolant usage a bit of oil no other major issues. I did notice one day just before the repair a lot of blue smoke after startup following a run of about 50 miles. Put this down to oil leaking past the valve guides.

Since the start up and driving since the head repair, at first I noticed blue smoke after driving about 2km on very light acceleration. Then on a few other occasions, however now only at higher revs under acceleration. For example, yesterday drove about 50 miles and only happened once when in 4th gear I overtook another car and accelerated from 3000 to about 3500 revs…did not use the overdrive during the run, preferring to keep the revs up a bit. performed perfectly, outside temp about 30c, temp gauge sat just below 70, only moved about the thickness of the needle when going up a couple of long sheepish hills. Oil pressure at 40 and dropped to about 15 at 500 RPM idle.

The car seems to be using a bit of oil maybe 1/2 liter in about 100 miles traveled…plug 3 has some oil deposits as does plug 6, but not fowled completely. Checked all plug wires from inside the dizzy cap to the end and all at near zero (using copper core wire).

I am wondering if the oil ring(s) in 3 & 6 might be gummed up, as the blue smoke situation has become less since driving a bit. Before my ownership the car did about 300 miles in 3 years, before that about 200 in 1 year, and immediately prior was in a private collection (not driven for about 5 years). The car is low milage, 69,000 and according to the paperwork back to 1994 has not had any major work, excluding the cylinder head recently .

Finally, my question: If it is a gummed up oil ring is this likely to fix itself with usage, or will a complete tear down be required. Is there any proprietary engine flush type products (snake oil!), that could be used as a possible clean out?

Apologies for the long, long version…thought it best to give as much background as I could.

Any thoughts very much appreciated.

Keep driving, long distance and as fast as you’re comfortable, if it doesn’t fix it you tried and it really wasn’t treated well for a long time. Don’t baby it. Could come back.

Have you checked the compression after the head rebuild? The compression test results before were a little low but within the percentage difference between cylinders. Engines will smoke and use oil through the valve guides so if the work on the head was done properly this will not be the cause. Oil rings have nothing to do with compression so oil control rings are really the only other possibly.

The compression values are alright, smoke when accelerating usually is rings, in the morning or after overrun is valve stems.
I would take it on a longish trip and if it won’t come back let’s investigate further.

If someone could please tell me what causes a huge plume of smoke only when accelerating hard past 4000 rpm in top gear on an otherwise fine engine I’m interested.

David, as you stated correctly in the first paragraph of your post, rings are one cause of a visible blue/white exhaust plume during acceleration there are many others as well; excess oil in the crankcase, crankcase pressure to high due to restricted ventilation exacerbated by worn rings, if the vehicle is equipped with an automatic gearbox a defective diaphragm in the vacuum modulator will draw trans oil directly into the intake manifold. Coolant will also cause a visible plume if it can find its way into the cylinders. Brake fluid leaking from the primary seal of the master cylinder into the vacuum booster will be drawn directly into the intake manifold. The first step of a diagnoses is to determine which of these fluids are being consumed.

My S1 XJ exhibited exactly the same symptoms as you describe; purchased as a non-runner, it had not been used since at least 2013, but as far as I can tell only a few hundred miles since 1995. When I first got it going it blew out huge plumes of smoke and did so for some time, but I never actually drove it because it needed a whole lot of other attention. Once I actually started driving it ( tests up and down the road) it slowly improved but still blew too much. A mechanic neighbour did a leak-down test and found nothing; we stuck some Gunk in it ( he has used it with some success) and there was a noticeable improvement, but that may also have been attributable to the engine getting a bit of use under load instead of just idling.
Anyway, long story slightly shorter, I now have the car road legal and have done about 150 miles in it; it still smokes more than I would like. Back in the day, my 3.8 E Type did about 250 miles to the pint and smoked less than this, the XJ seems to have used no oil at all BUT the brake fluid level has dropped appreciably. I pulled the master cylinder from the booster ( as suggested here by JE Farr) and lo and behold, the m\c is leaking into the booster. I am fervently hoping this is the issue as the engine otherwise seems fine, good power, no knocks etc. and is externally clean and leak free, suggesting it has been looked at before, perhaps in search of oil burning. There was a spare brake booster with car too, perhaps purchased after engine work cured nothing. Fingers crossed for both of us.

Thanks for all the suggestions.

Decided to change the oil and filter, the last oil change was less than 500 miles, however the previous owner was using the choke for 15 / 20 minutes and then the car would run OK. When I first started the car and had a look at the carby, the back carb was not operating at all…float stuck in the off position. Did an initial fix and got it running OK, then rebuilt the carbs when the head was off for repair.

I am hoping, perhaps optimistically, that new oil will make an improvement. In addition I used an “Engine Flush” in the old oil. 60% hydrocarbons…and 40% of who knows what…maybe it is just snack oil stuff, hopefully no detrimental effects.

Put exactly 6.5 litres of oil and checked the dip stick, showed full. Started and run for less than a minute, no leaks and needed to add another 1/2 litre, which presumably is the oil filling the oil filter.

Will go for a drive tomorrow, and hopefully less blue smoke.

Hopefully an improvement. I initially thought it might be the booster but dismissed that because the booster doesn’t actually ( or shouldn’t ) be directly associated with brake fluid, the vacuum side that goes to the engine shouldn’t suck fluid even if the diaphragm is split. My fault is related to the m\c leaking fluid into the booster and then being sucked into the inlet manifold. IIRC, Mk2’s have a m\c at the bulkhead and another down at the booster, could that be leaking? Just a thought.
I generally think of oil burning as happening under one of two conditions; under load ( rings) or on the overrun ( valve stem wear or seals) I live at 400m, so most travel is either under load ( uphill) or overrun( downhill), but the oil burning wasn’t consistent with either of those conditions, but seemingly random. Thinking about it now, it may be related to how much braking has taken place just beforehand, at least that’s what I’m hoping. 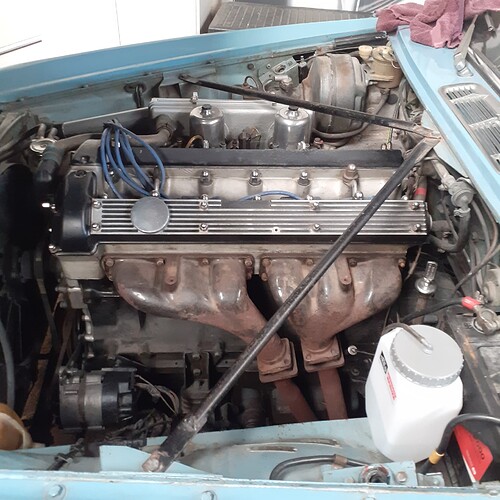 IIRC, Mk2’s have a m\c at the bulkhead and another down at the booster,

Yes Kevin. Mk2’s have the master at the firewall and a slave cylinder at the bumper end of the RH wheel arch - this is boosted. Then it’s onward to the calipers. Even if the slave seals failed and those separating the vacuum circuit, it’s an uphill run to the unlet manifold. Not where I would be looking.