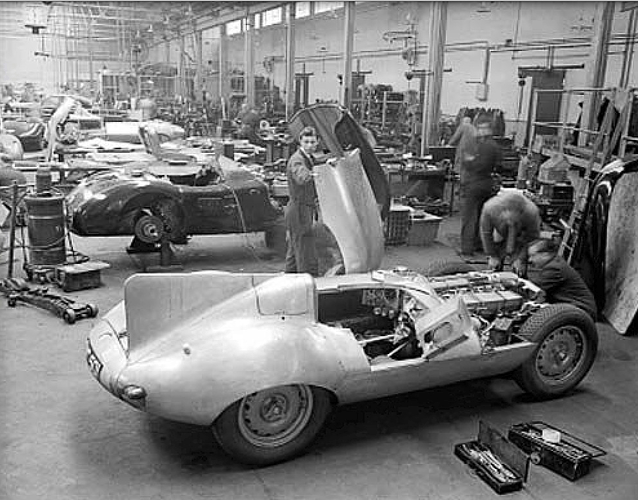 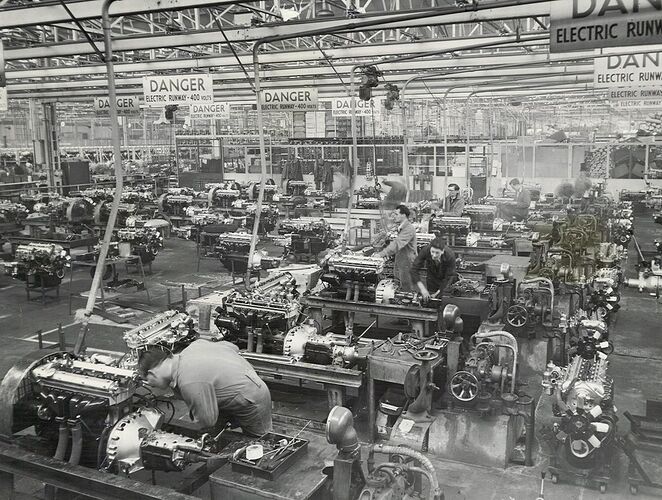 An early D-type and a C-type behind it. Not sure about the address, it may have been the experimental department.

And the engines may also be from another plant than Browns Lane, possibly Radford.

Ps. Those engines appear to be for
XK’s and not Saloons based on the exhaust manifolds and gearbox details together, XK120 or XK140?

Photo one shows the first D-type OVC 501 (XKC 401) in foreground with a disc-braked C-type with louvered door (XKC 011 or 012) in the Experimental Department workshop. Also visible is the C/D hybrid on the left. The photo is shown in Andrew Whyte’s, “Jaguar Sports Racing & Works Competition Cars from 1954” 1987 p.32.

The testing facility was important. Every engine was run for a couple of hours, on city gas which was less expensive than petrol. Both facts from the book mentioned above.
Note that none of the men wear ear protection. The noise level must have been infernal in that environment, or is there an exhaust extrusion facility, with silencers, which the picture doesn´t reveal?

Factory pix are fun.
There certainly would be exhaust ducts somewhere, perhaps in channels under the floor.
Cooling hoses overhead.
The closest engine with the man bending over it looks like Mark VII, with no trans mount. The next one has an overdrive.
The second man may be connecting a drive shaft to the testing machine.
The third man may be operating an electric hoist. Perhaps each rail had one, so many Danger signs, probably open buss work above.

I wonder if any pictures exist that show the LT bodies, supposedly sitting on the shelf as Hornburg found them.

Always nice to see those old pics. Don’t know whether these pics were taken in the same year, but I would say it could be both around 1955. I don’t think the D type is in the regular assembly department; probably this picture has been taken in the “Specials” department.
The engines look like the 140 or Mk VII versions and the second from the front has an overdrive as well.
Wish I would have been there in that department in the Fifties, but then of course I would be even much older than I am already…

According to Whyte, the photo in the Experimental Department was taken before the 1954 Le Mans race, so before June of that year.

The closest engine with the man bending over it looks like Mark VII, with no trans mount. The next one has an overdrive.

Anyways anyone know when the Radford engine plant was opened? I have some later (1960’s and 1970’s) pics from there, but I don’t know when it was opened and if there was an engine plant before that at Browns lane, anyone have the facts?

Mark VII and Mark VIII had the same exhaust manifolds as XK120 and 140. Mark IX and 150 had different.

The C-type is XKC 011 and the D-type is XKC 401 as stated above. The Light Alloy car sometimes referred to as XKC 201 can be seen in the upper left corner of the photo.
This would have been in April or May of 1954. The C-type XKC 011 is still wearing the three eared knockoffs after testing the new D-type wheel design at Reims in early April. This C-type would end up going to the 1954 Le Mans as a substitute for the XKC 012/047 car that was crashed in route to the race.

Jaguar had agreed to upgrade the Belgium C-type (XKC 047) to the 1953 works configuration for the 1954 Le Mans race, as Jaguar was moving on to the D-Type. Instead, Jaguar took one of their works cars (XKC 012) restamped it XKC 047, added a works prepared engine with Webers, other goodies, and painted it yellow. The Belgium team would have a works prepared C-type for the 1954 Le Mans. After it crashed on the way to the race, the car in the photo, XKC 011 was sent in it’s place. It also was restamped 047. This was not all in vain, It placed 4th overall at Le Mans. From this point forward the chassis numbers were switched on those cars. (011 became 047 and 047 became 011). This was all discovered back just a few years ago, up to that point the identities of the three cars 011,012, and 047 had always been in question.
Also, note the bigger 17 inch wheels on the D-type. I think they only ran them for a few races.

Good to see someone clearly understands the 011-047 012 story.
Took me a couple of months to convince the establishment of this having first raised the problem as early as 1991 but not actually knowing what the outcome would be at that time. I am also of the belief that chassis 012 has survived under another car.
I thought the 17inch wheels were only used at one event in North Africa?
As a matter of interest who is 53ctype?
regards terry