A friend let me drive one like this when I was 16. Could barely put my feet on the ground . 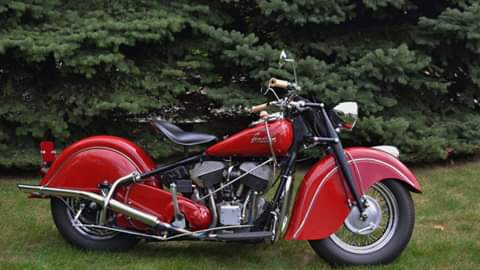 A vintage Indian is my dream motorcycle. I missed out on an original paint Indian 4 about 20 years ago and have whined about it ever since.

Indian Motorcycles were great bikes!
in the 19 50s would see them around when touring!
both BIG twins and even a couple 4 cylinder ones.

my DAD rode in late 20s and into 30s, he rode a 1927 Harley factory soup job, pix of the F-head 74,1st engine made by H/D with DOW Metal pistons, a straight thru Barrel carb, run out to 110mph in second gear, top of the speedo!
says he never got beat in a street race!
early 30s tried the NEW Indian Scout , said on a board track it couldnt be beat,handling was great, 74 Harleys to much torque get squirrly, scary!

… and look how that turned out for Burt Munro!