Opening the Bonnet the hard way

I have a big problem. When our house fire happened many years ago, the 69 2+2 which was burned from the belt-line up went in to storage shortly after. Well, I am of the heart and mind to start working on it. Today I pulled it out and began the difficult task of inventorying just what was going to be needed. The fire was hot enough on the right side to do a lot of heat damage including melting the pot metal pull/hook for releasing the bonnet. I cleared that area and am using a pair of vice-grips on what is left of the hook/opener to rotate the handle and pull it out.
Almost
I can pull it almost all the way out to release but not far enough. After several hours of poking/pushing/finagling and etc, I’m no closer to opening it that I was when I started. Based on how far the left side comes out before it releases, I need about another 1/8+ inch to release it. But it just won’t do it no matter how hard I pull/yank the handle.
The engine was out of the car prior to the fire for a rebuild (lost it as well) so right now the engine cavity is empty. I am toying with the idea of crawling in there to manually release the hook or, worst case, hit it with the saws-all.
My question is two-fold. Can I get to that area with everything else still there (air filter housing, etc are still in place) to manually rotate the hook? 2nd - anybody got any other ideas to get it to release without all the contortion I’m gonna do to get under/in the engine bay?

All I can think of is shooting WD40 or penetrating oil through the rod hole with a tube. Might also be able to mist downwards if you scrape out the melted rubber bonnet gasket. Assuming these don’t work I have the feeling you’re going to be cutting out part of the wing. Shouldn’t be that awful since it needs a full restoration anyway.

anybody got any other ideas to get it to release without all the contortion I’m gonna do to get under/in the engine bay?

Undo the hinges at the front and lift it off?

I assume you’ve already tried this, but I’ll ask the question anyway. Have you had someone apply a little downward pressure on the bonnet while you pull the latch handle? My S1 was also in storage for about 20 years and I sometimes have to give the bonnet a little pressure to take pressure off the latch and allow it to pull that last little bit. Unlikely the solution will be that simple, but worth trying.

If you can get it up in the air, try to get under the latch mechanism where the hook angages with the and use some kind of long screwdriver or similar to force the hook open? If you have the shields on the car it might be a bit difficult to get to it but if the car is to be restoredd anyway then those shields are not at all expensive to replace.

Other than that I like Pete’s idea of removing the eight bolts at the hinges and pulling the bonnet off that way. You’ll need help though.

Other than that I like Pete’s idea of removing the eight bolts at the hinges and pulling the bonnet off that way. You’ll need help though.

If the hooks on the latches are still engaged could the bonnet be pulled off like that?

Probably not pulling up as it would hit the bulkhead, but if the bonnet nose can go down at all, it might give it that last small bit of rotation needed.

If you are lucky and the bonnet is shimmed forward a bit you could try removing the horizontal adjustment shims and loosening the vertical adjustment bolts at the front of the bonnet and forcing the whole thing back as much as possible to get a bit more clearance for the latch.

shake the he… out

With the engine out I would think you could get at it, not easy but within reach. 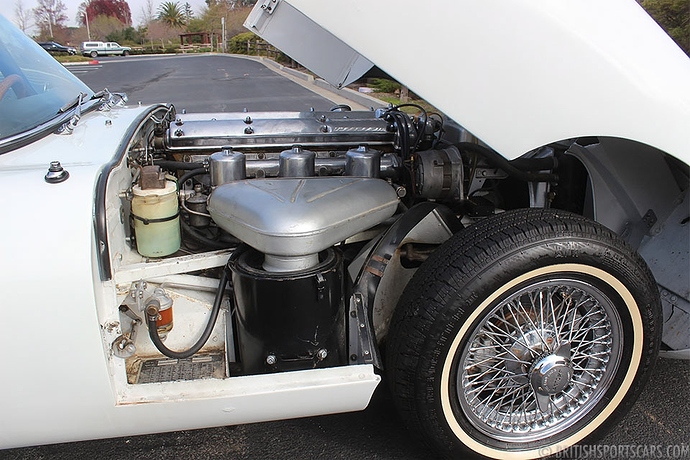 It is unlikely that the front of the bonnet would drop but some supports under there to catch it if it did would be prudent. 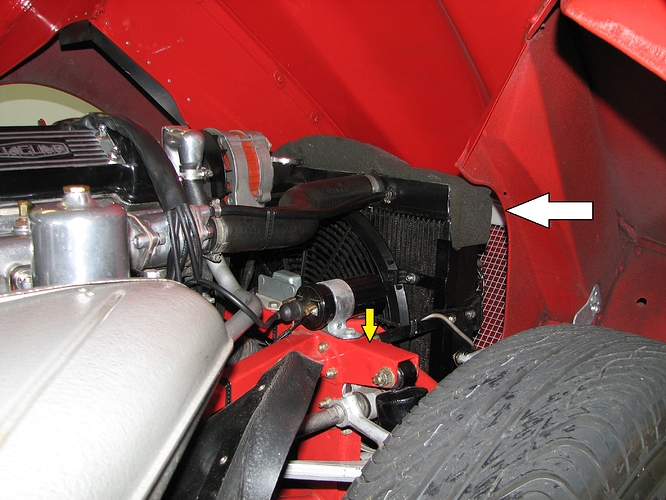 Of course, you are right. The inner valance on the other side would also Hit the frame rail to stop it droping.

The inner valance on the other side would also Hit the frame rail to stop it droping.

Unfortunately I discovered it when installing my bonnet. I marked up my freshly painted picture frame.

Of course if a fire melted the pot metal latch handles and destroyed the removed engine, even the low hinges may be toast (or peanut butter).

All, when I first started the process, I had to remove the escutchson plate and unscrewed/removed the hook then installed the one from the left side to have something to grip. Realizing I wasn’t getting anywhere, I put what was left of the old one back on (all the barrel was good) and used vice grips on it so I could get a good “yank” on it in hopes of pulling it free. No dice.
I removed the hinge bolts as Peter noted but that too didn’t free anything up. Gave me more “wiggle room” but thats it. My Son-in-Law was over a few hours later and I had him sit on the the corner of the bonnet above the hatch, push on it, pull on it, wiggle it etc while I tried pulling the grips. Still no dice.

Scott, similar problem here. Before the fire, this side you had to push down ever so lightly to pull the pin to open the bonnet. Thanks Paul for the visual. Seeing it with everything there helps to visualize what I have to get through to get to the latch. The washer bottle and top of the air cleaner aren’t in there so if I can jack up the car and crawl into the engine bay it looks like I can reach it.

On a different note, I have to say one of the things I am really surprised by is the amount of rust in a formerly rust-free car. After the fire, what little was left of fabric/consumables in the interior I removed and thoroughly cleaned the interior leaving just bare metal and seat springs.
When I pulled it out Saturday afternoon, I was shocked to see my inner rockers in the interior rusted thru. Not down by the floor, in between the sill and the floor. Nothing touches that area. How the !?! Corners/sides of the floors as well. Jack-mount point on the right front also looks like it could collapses if I look at it wrong.
My work is truly cut out for me

thanks for the suggestions all

Best of luck, Bill. It’ll be difficult but rewarding in the end.

I removed the hinge bolts as Peter noted but that too didn’t free anything up. Gave me more “wiggle room” but thats it. My Son-in-Law was over a few hours later and I had him sit on the the corner of the bonnet above the hatch, push on it, pull on it, wiggle it etc while I tried pulling the grips. Still no dice.

Hello Bill,
You will get the Bonnet Opened from inside the engine bay with the engine out and with all other components, such as Air Filter Canister (RH Side) and Heater (LH Side) still in place. But not by manipulating the Bonnet Catches, or by disconnecting the Bonnet Hinges. You will be hard pressed getting to the LH Catch to manipulate it and as the Hook of the catches close over the top of the horizontal bar in the Bonnet Lock Bracket, the bonnet can’t be moved in any direction with the locks in the closed position.

Getting inside the engine bay should not be difficult. Simply jack the front of the car up, place on stands and slide under. Once in the engine bay, you will get the bonnet opened by removing the Bonnet Lock Brackets that are attached to the inside of the L and R wing (see the following picture) 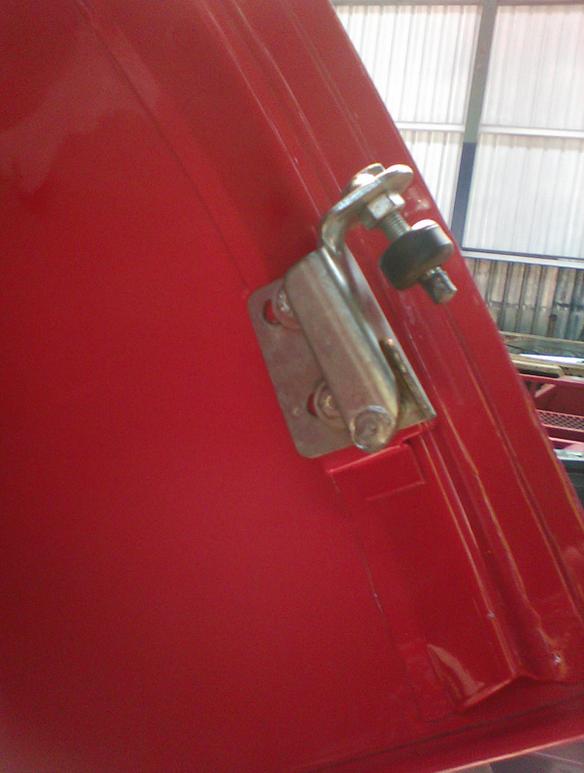 The RH Bonnet Lock Bracket is quite easy to remove, as you have direct line of sight and reach to it (see the following picture). 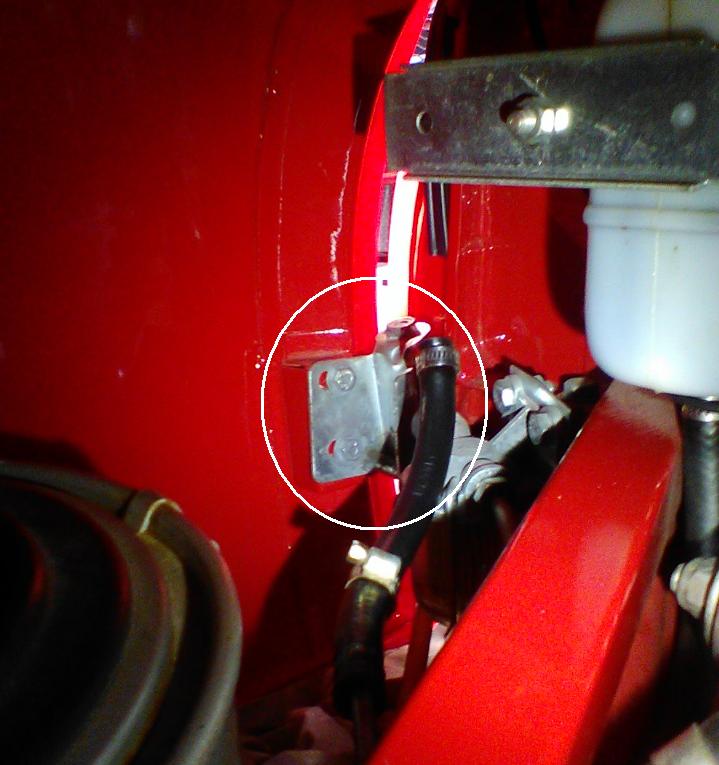 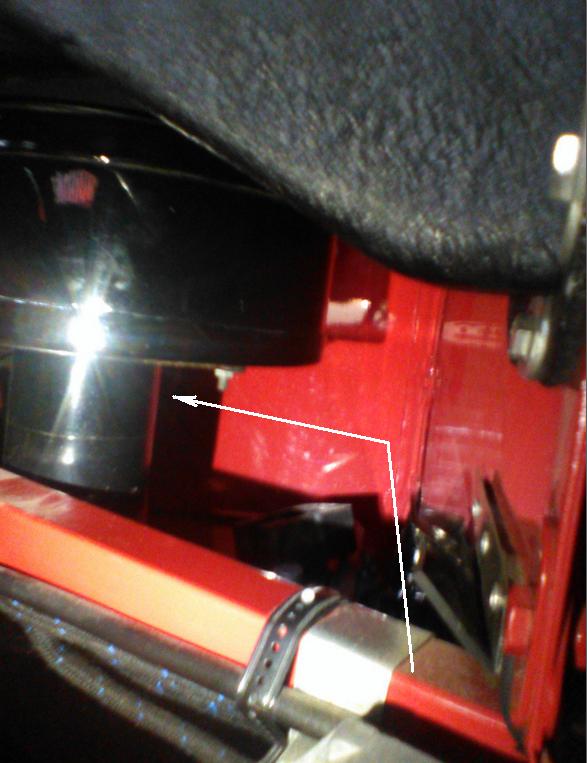