(Include at least one picture)

Description: Hi all, I’m looking for an original black shift knob. Please let me know what you have.
Thanks!
Robert

Cost of shipping (if selling):

Where are you seeing that??
I just looked and they’re $25 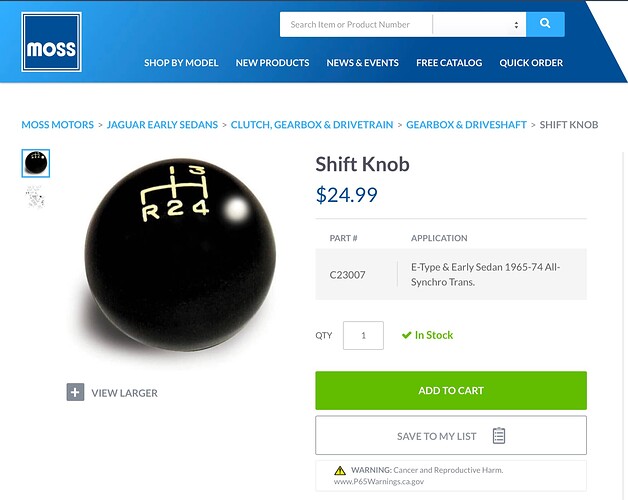 It was in the paper catalog from last month. Blew me away, along with a $600 replica 16" steering wheel.

If not mistaken, they have a cheap plastic repro shift knob, and a real replica, with steel inside, and nylon cover. The steel added weight to help with the throw. It was $98.00.

Bob, I was looking for one of these as well and it turns out they are very hard to come by. I ended up buying this one off of ebay. The weight is correct (I believe) at a little over 400 grams and it looks really nice too. I think its a good value for money. 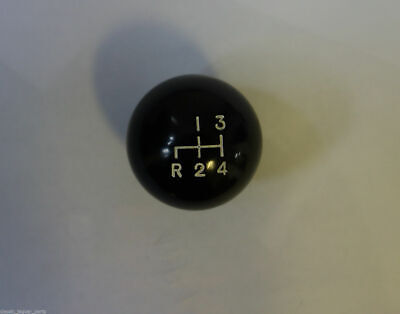 Like rk62ots, I gave up looking for an original, and I also bought this exact knob after comparing various suppliers’ offerings. It’s a bit lighter in weight and smaller in diameter than an original (all the repros are) , but it’s the closest match that I could find. I’m very happy with it, and the price is right.

Thanks for the suggestion and the link! Perhaps that’s the way to go.

I was hoping for an original but maybe that’s not going to happen. What’s the diameter of this one? I’m curious how it compares to the repro on the car now.

I can measure my original one if you would like me to.

BTW, back when I bought my knob used in 1986, the white shift pattern had almost completely worn away through use, and I had a professional car painter touch up the paint by hand with an artist’s brush and a steady hand. Now that an additional 36 years have passed, I sincerely find it difficult to believe original knobs with paint in the grooves are still around.

In fact, even in June of 1986, at my first JCNA concours, the interior judge said he was docking me for my “replica plastic shift knob.” He said there was no way the white paint wouldn’t have worn away by this time. I scrambled to remove the knob so he could feel the weight, and insisted I had a pro painter touch up the original knob. He was satisfied, and I didn’t get marked down. Took 2nd place.

I keep mine squirelled away with other valuable goodies, and use the walnut knob that came with the car in 1971 for my driving. It’s all I’ve ever known. That perfect original only comes out for show. 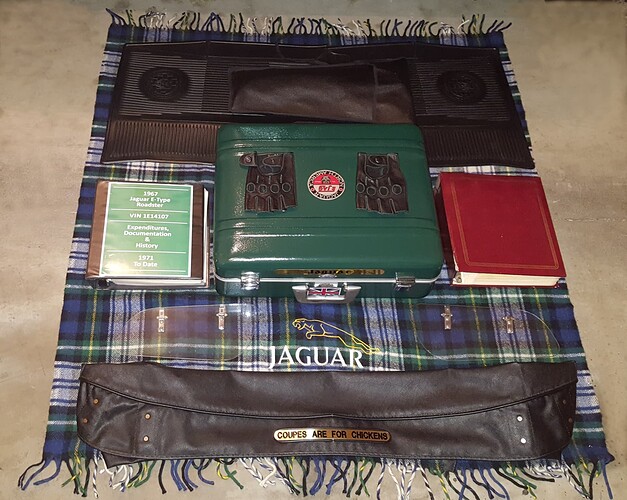 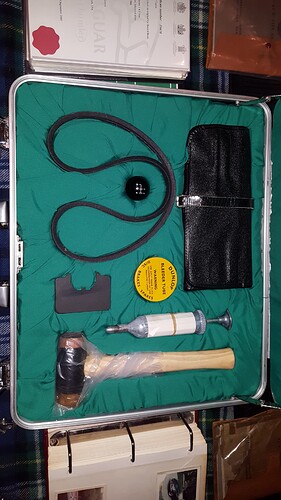 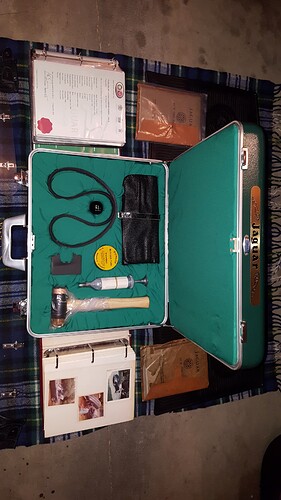 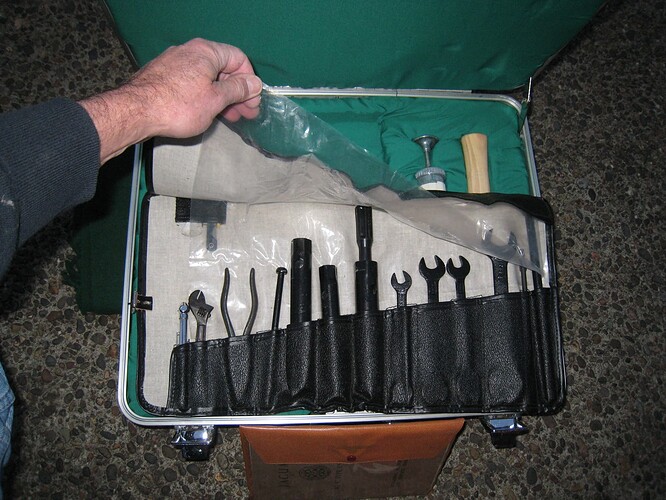 I can measure my original one if you would like me to.

Thanks! That would be appreciated. I found this on the web but don’t know if it’s accurate 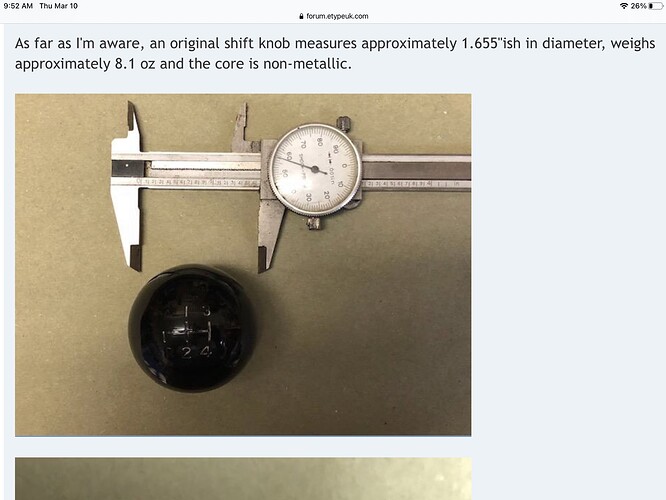 BobThomas
It is (or at least was) possible to find an original shift knob on E Bay. I purchased an as new 8oz plastic covered metal core original that the E Bay seller had found at a garage sale in an Amco aftermarket shift knob box marked JAGUAR CLOISONNE WALNUT. I assume that back in the day the new owner of an E Type wanted a fancy wood shit knob to match his cars’ wood steering wheel and after the installation of the new knob he put the original in the Amco box where it sat for decades until it turned up at the garage sale. I was the only bidder. 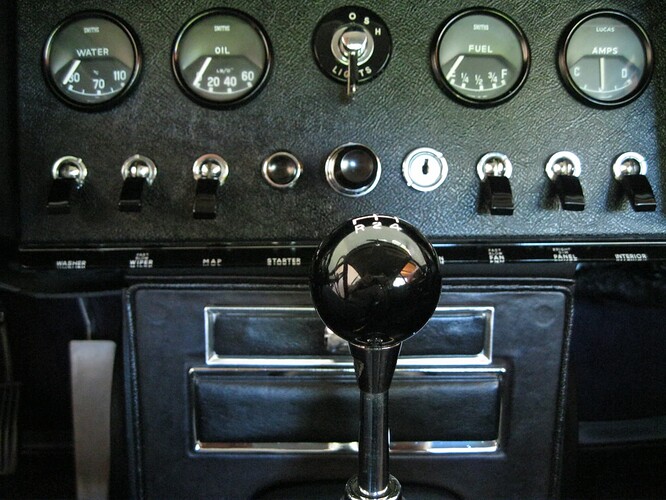 the interior judge said he was docking me ……. no way the white paint wouldn’t have worn away by this time.

Jeez, they want to deduct because a part is in good condition instead of deducting for ones that aren’t? And the JCNA wonders why people don’t renew their membership.

Well, that was then. I don’t know what they’d do today. At that time, the judge wouldn’t have docked me for a worn shift knob. The only reproductions at the time were cheap plastic knobs with a seam where the molds came together. I bought one for show, and refused to put it on the lever due to its onvious inferior quality. Then I searched for a used one at all the usual suppliers, as there was no eBay or World Wide Web back then. The only knobs available had the shift pattern worn off. People were used to it back then.

Hence, when I showed up at the concours, the judge only reacted to what he perceived as incorrect at the time. I really can’t fault him for that, as nobody painted their shift knobs in 1986! They were all black!

BTW, that show was Western States 1986 in Whistler BC. What a fabulous experience!

Ha! Note the well-faded shift pattern. In fact, your hand pulling on the knob not only wore out the white paint, but it also burnished away the etched grooves.

I’ll get on this and supply a pic soon. Gotta pull the car cover off, open the boot, pull out the tool case, and yada yada…

That is sincerely cool, Tom! Good on ya…

I removed my original when I got the car in 1982 and replaced it with a leather covered item. It’s been in The Box™ ever since. But the shiny back plastic finish is cracked and separated from the heavy metal ball and beyond repair.

Has anyone figured out how to replicate the original finish and inset shift pattern?

Edit: I have a repro from SNG in place. Nice. A little smaller in diameter and a little lighter.

The best feeling shift knob I ever used was the Kamei “golf ball,” a hot item in the 80s, but rare as rocking horse poo, now.

Oh yes I remember that…. It was not that easy, but they‘re nice. Maybe one day someone does a repro…

Robert, Just wondering if you found a KNOB as of yet? I looked around and found these three, of course 1 is better then then other then the next. THESE Are Original’s, far left some scratches, 1 nick (see pic), NO PAINT, $65.00. Right side Nicer condition 1 tiny scratch, no big deal some original white paint, $80.00. Lower is Very Nice, Original White Paint, $120.00. If interested please let me know, I’ll charge $5.00 for shipping in the U.S. lower 48, Jim. 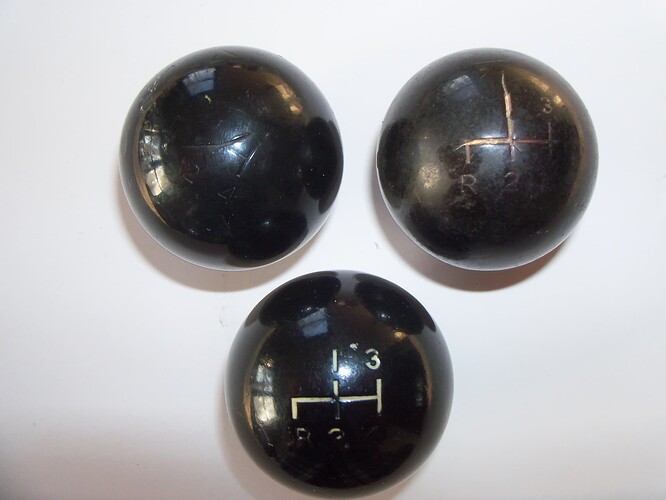 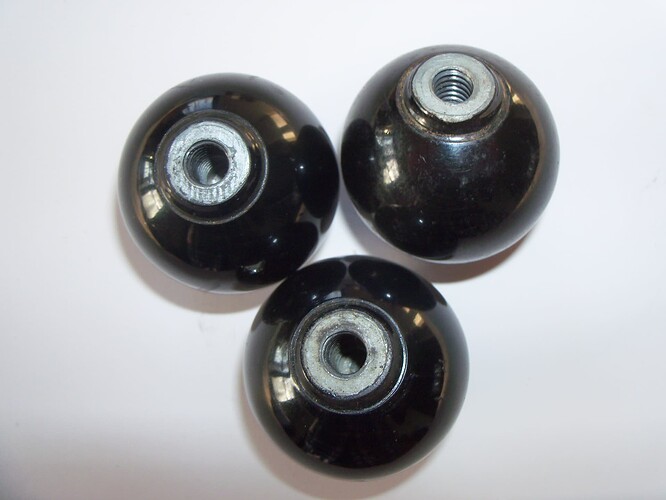 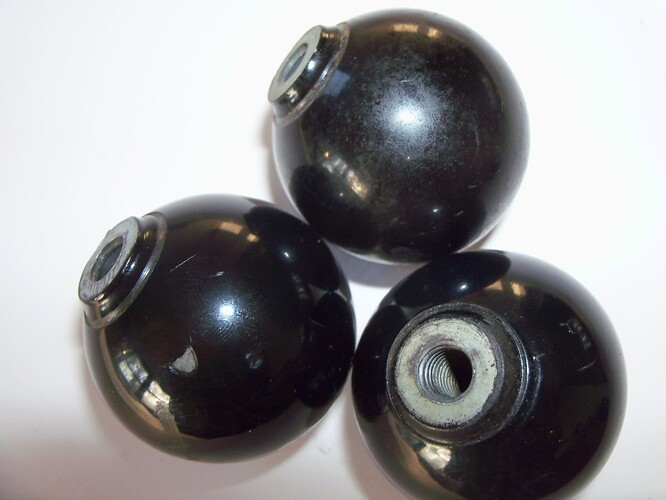 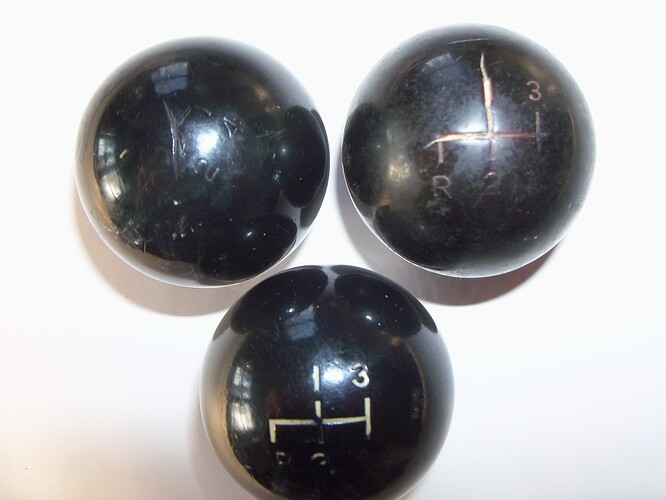 As mentioned, that writing rubs off!

Hi Bob, I measured my original knob. The pic you got from the web looks accurate. I also measured the height. 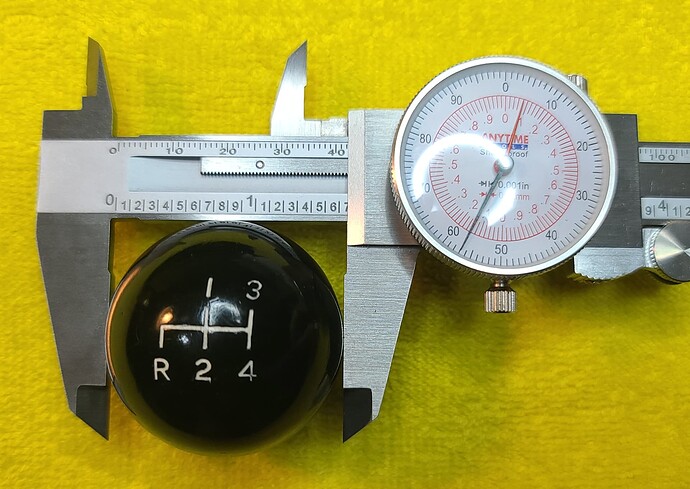 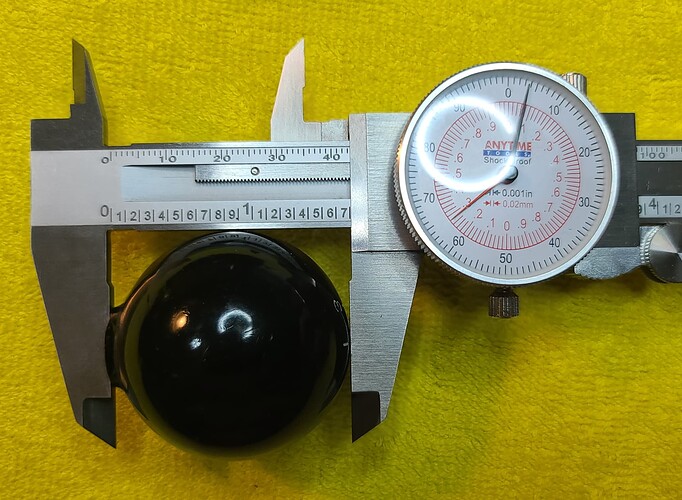