My '63 FHC has a Blaupunkt Frankfort TR DeLuxe US radio in it. Two parts: tuner with tubes and amplifier with transistors. These old radios can be converted to 6volt or 12volt. And they should (?) be convertible to negative ground. I know how to do the voltage conversion - mine is already 12volts of course. I cannot see how to convert to negative ground.
Any know, or have a schematic.

I took it out of the car last night, hooked it up to the battery but did not have an antenna. The radio comes alive with nice glowing tubes and dial indicator. I’ll try it with an antenna today. The radio has MW, AM, AM, FM, FM buttons. Medium wave is an Amplitude Modulation frequency band I believe above the 1500 KHz band. I am not sure what we used that for in the USA. The AM and FM are all familiar to us here in the US.

Anybody have info on this radio, I would appreciate it. 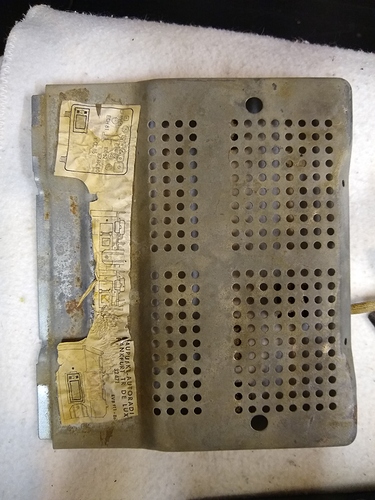 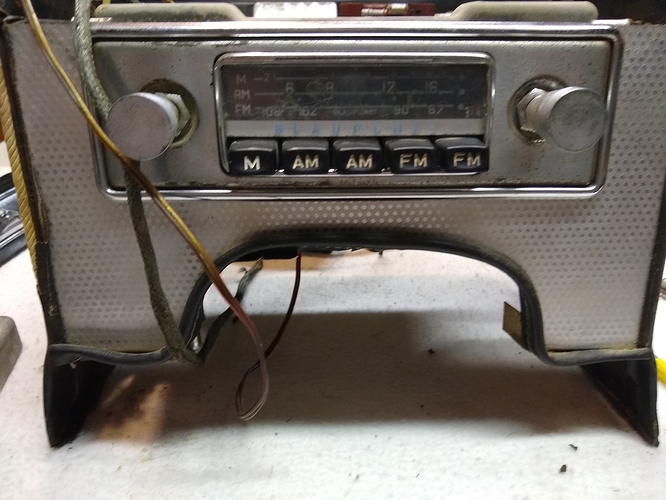 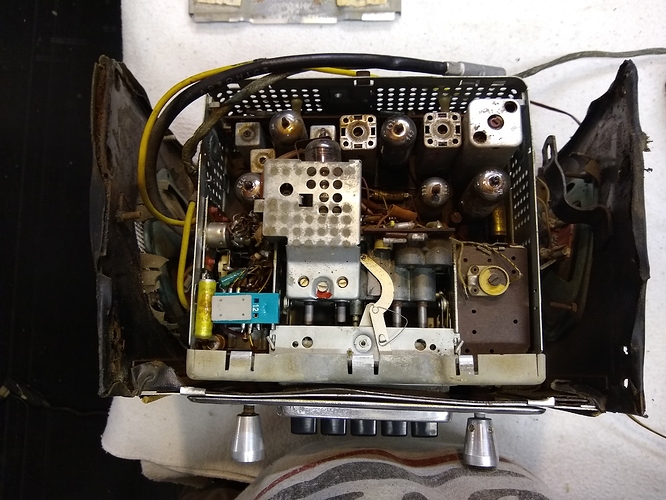 You might try a Google search if no answer here but other brands (Bendix, Motorola) I have had that were switchable polarity either used a sliding switch or a plate with pins that you remove and re-insert in a different position.

Could that blue rectangular piece in the lower left of the last photo be such a plate? Possibly.

Proceed with care and don’t fry your radio.

Scott there are 3 or 4 companies on the web that do the conversion
They gut YOUR radio and give you back the old parts
My Aston db4?was done and wonderful now with either wireless blue tooth or the AUX wire
Last one I did was under 600 dollars completely restored
If that’s what you want
Gtjoey1314

Anybody have info on this radio, I would appreciate it.

I didn’t go through all the listings but the attached site might be a source for the original manual.

You need further documents? Don’t hesitate to contact us. A delivery by mail is not possible for technical reason.

Documents for older units you can also try to get here:

Sorry I can’t be of much help…other than to say I bought an original Becker Europa with a lead that I plug my phone into from a German company who’s name I cannot recall,but I’m sure there are several companies that will make your unit servicable for modern times,hit the google search,and don’t be tempted by those “Retro” units.

Have a look at RadioMuseum.org to see if there are are specs on your specific model. which may be this although faceplate differs: https://www.radiomuseum.org/r/blaupunkt_frankfurt_tr_us_30471_ser.html
Documents download one page at a time and there is a daily maximum but this model is switchable between 6 or 12 volts and + or - ground. Most Blaupunkt models are in their database.

Sigh! I do all this work and nobody notices: 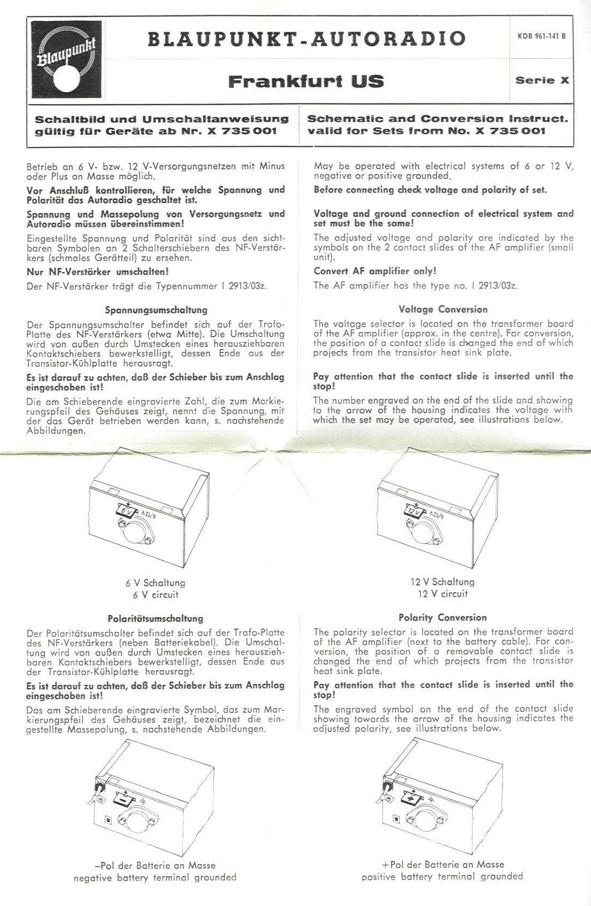 Sorry, I’ve been gone for a day. I appreciate all the answers from everyone. That is quite a list at Blaupunkt John. It’ll take a while… I did quickly try the schaltungsdienst.de website, but didn’t get through. Still, I’ll be after that when I get a chance.
Joey, I am aware of the re-purpose guys, but I’m thinking I’ll make this old radio function again just for the fun of it. These days, unless I want news, I listen almost exclusively to Spotify on my phone through the car’s (not the Jag) speakers and if that’s not possible, I simply run BT thru a JBL Charge speaker/charger/amplifier for a pretty descent sound. Nothing permanent in the car.
And Robert I did find the RadioMuseum and found something very close to mine, “Frankfurt TR de Luxe 32471.” I just need to join them in order to obtain the schematics. I was just hoping to see if anyone knew how to switch the ground. The little blue tab in one of the pics is how you change the voltage - you have to do so on the amplifier as well, but it is not how one changes the ground.
Yes, the retro radios are not so wonderful. I did that on a '64 Lemans a few years ago, ran it through a large but hidden amp. Still not wonderful.
And Michael, you are right! I need to keep remembering the info on your website. Including this one for the Frankfurt Type 9798. That is close to mine, but whereas I have 6 tubes and a dual chassis, it has 4 tubes in a single chassis. The problem with switching the ground on mine may be the transistorized power amp. Tubes would have been easy, perhaps not with the transistor. Any way I’m on the hunt and thank you for your help! (I still need to call you on my radiator!)

And Michael, I am now looking at your zipped files. Promising.

On my radio, I did get an antenna in an attempt to fire it up. It is a pretty safe thing to do, I just wired it with a fuse and positive ground off a 12volt battery. The tuner chassis comes alive, but not the power amp (which is transistorized). So, I have to look into that.

shucks, I use my phone on my new cars! I’ll listen to the local radio some when going into town, but any trip over 20 min. I am using the phone and Spotify. It is far more reliable in the mountains than Sirius and I can make up my own channels. And I play my own songs that I uploaded to the phone. No physical connection other than the charger when needed. Still, I want the Blaupunkt to work.

Speaking of which, I did find how to change polarity on the power amp, but not on the receiver. Maybe Michael has an idea. Once I figure it out, I can upload info to his page also. [quote=“Michael_Frank, post:8, topic:394841”]
Sigh! I do all this work and nobody notices:
[/quote]

Send me your info and I would be only too happy to post it.

I’ll upload some interesting info on this radio here. There is an organization called RadioMuseum.org that does indeed have the data on this and many other radios. Unfortunately, in order to simply download a schematic, they require membership and that requires a $25 fee and “active” yearly membership. Neither of which will I do. They can be found here: https://www.radiomuseum.org/r/blaupunkt_frankfurt_tr_de_luxe_324.html

My particular radio is a Blaupunkt Frankfurt TR Deluxe 32471, T275908. It has two components to it: the receiver (tube based) and the amplifier.(transistor based). There is a means to change the voltage from 12V to 6V and also to switch the polarity. 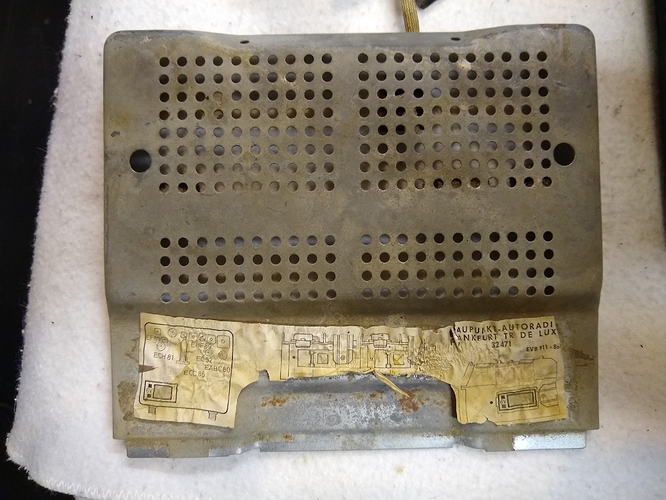 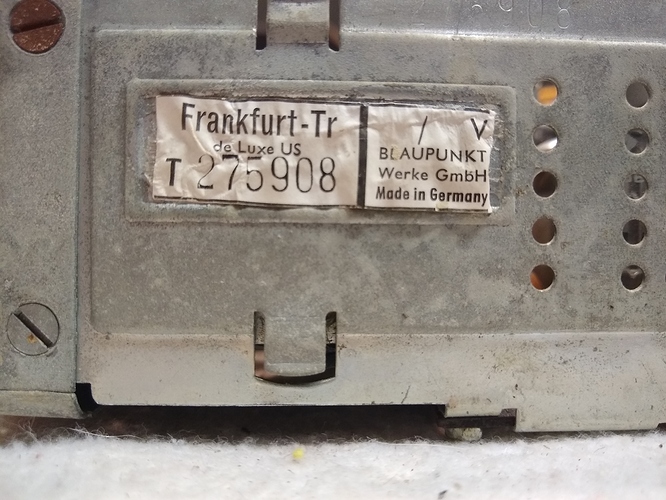 Here are the pics showing more detail on the radio. Lots of you have contributed to this knowledge, so forgive me for consolidating it and I thank you all for your contributions. Okay, so this radio has some interesting characteristics. First, the polarity and voltage (and if I am wrong, someone please correct me!): Remove the top cover of the Receiver and one finds a White Pin Set mounted in a Turquoise Socket board to form a sort of Switch. By pulling out the pin set and moving it to cover the 12V, the Receiver is changed to 6V. Likewise on the amplifier, there is swing-away door that exposes another Pin and Socket Switch, relocate that pin set to cover the 12V and the amplifier is switched to 6 volts. Simple, clever and fundamentally reliable and mistake proof. 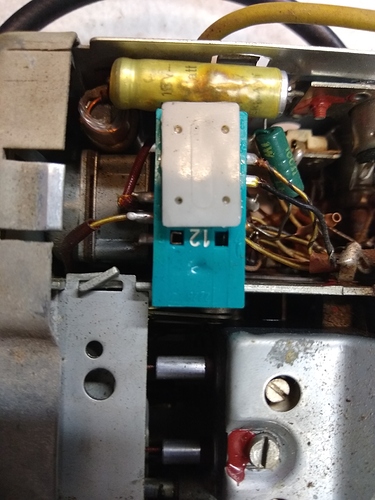 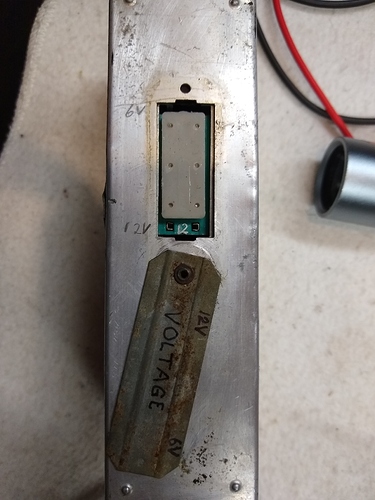 Now the polarity is somewhat different. I’ll have to draw on the picture in order to show what has faded so much it is not easily visible to the eye. I you look at the drawing afixed to the top of the Receiver cover, and zoom in on it, you will note the left side is depicting how to change the voltage inside the Receiver and the right side is depicting how to change the Amplifier. In the center is a drawing of a second swing-away door on the Amplifier. Open that up and there is a small square Pin and Socket Switch the top of which I have drawn on to show in black what is like Braille in the white plastic. Pull that Pin Set out and aim the arrow towards the black “-” sign and the entire radio set (Receiver and Amplifier) is switched to Negative Ground! I’ll draw on the old drawing as well to make it clear. 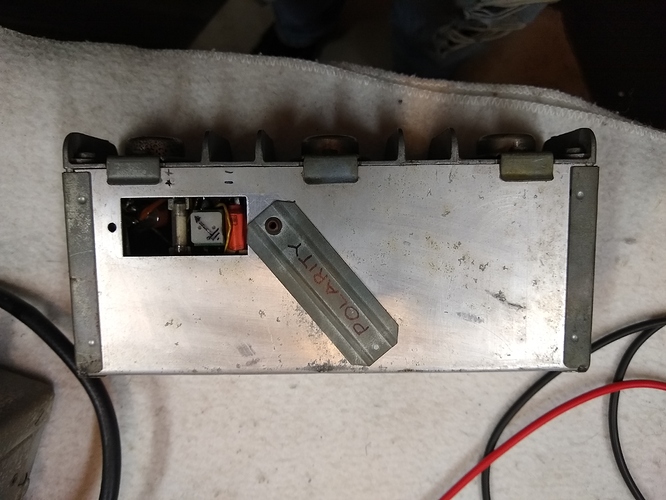 So that’s that I believe. Now, unfortunately, I found a broken wire inside the Receiver. (See red-marked wire.) It goes to one of two possible places but I am not good enough to know which. So, I still need to find a repair shop that will go through this radio for me. Any suggestions? 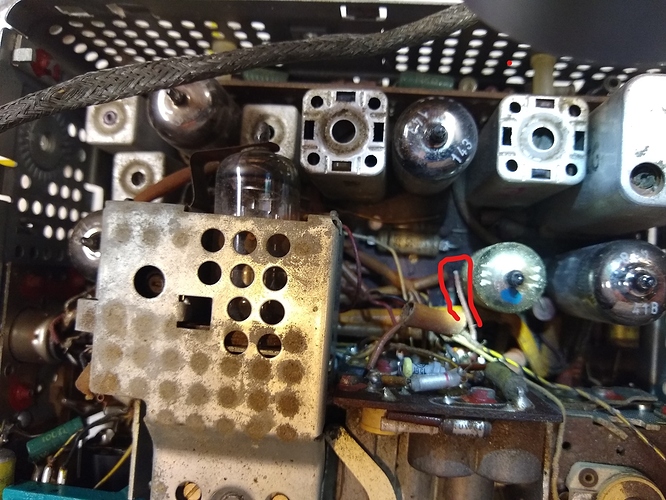 So, I still need to find a repair shop that will go through this radio for me. Any suggestions?

There is this place, found it by googling, I have no personal experience with them. From the area code I guess they are on Long Island.

Here’s another place in Pennsylvania:

There are probably more in the U. S., but these two popped up quickly in the search.

Thank you John. I looked them up and will call both. I also have an old friend that I have lost touch with who loved these old radios. I’m going to see if I can find him still. It’s a good time for me to send this out, so I’ll pursue this rather quickly.

Yeah looks kinda crusty…Gut it and a chip the size of your pinky finger nail replaces it all IMHO.
Good luck either way.
gtjoey1314

I have a friend who used http://www.cruzclassicradio.com/ for his radio work. He was happy with their work.

A thousand dollar radio will sound cheap if your installed speakers are in the middle console. You will never get good sound in that configuration.