I have been searching for the correct spark plug type for my 61 engine. Manual and 61 SC quote Champion N5 but nobody seems to mention them anywhere.

Later literature states N12, but what is wrong with the N5 Type

Any has some experience with the N5 spark plugs? Is the N12 equivalent but just another name?

N-5 was replaced by N-11Y (Y = protruding cone) due to reports of fouling. 5 is a hotter plug than the 11. You can also used the N-12Y which is a marginally cooler plug still. The Y suffix plugs have an electrode that protrudes further into the combustion chamber. 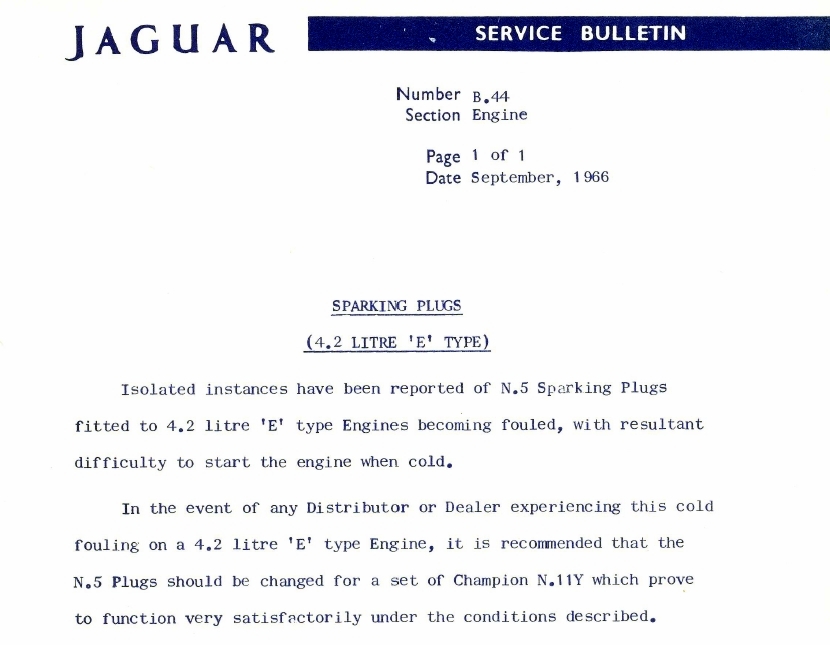 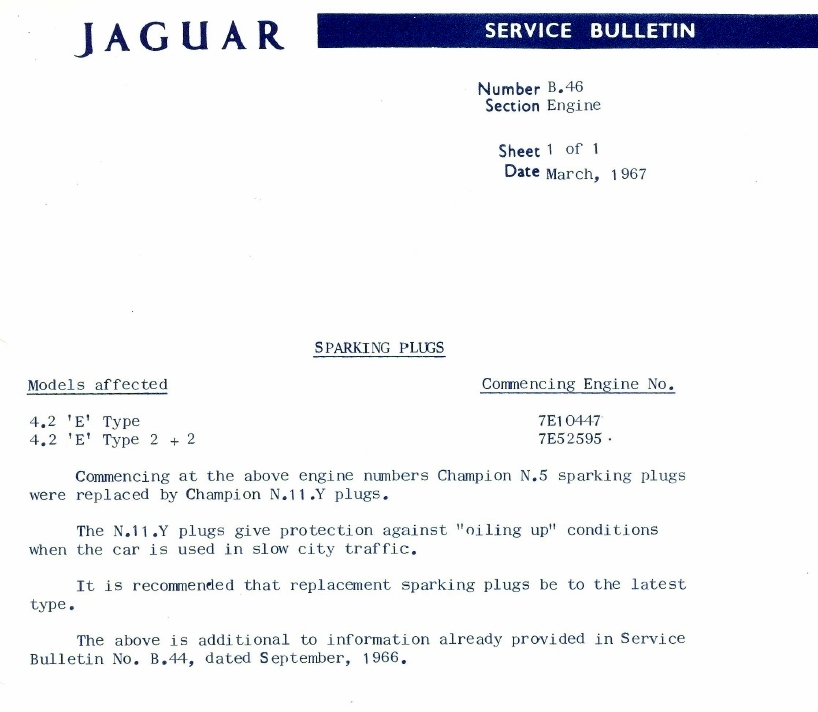 I used to use NGK BP5ES instead. (Just don’t tell the purists). These days I go for a longer lasting plug suited to modern fuels BPR5EIX. These last for tens of thousands of miles, which equals less wear on the plug threads, an important consideration for a still well used 200,000+ mile engine.

I used to use NGK BP5ES instead

I gave up on Champions, 30+ years ago, due to a large number of bad plugs: switched to NGK and have never looked back. Used them in the Jag, use them in my Hyundais–where they last 100,000 miles±-and in the Rover.

The Champion number system changed…so the N5 (the N5C was an improvement with “Copper”). actually became the N9, and a step hotter was the N11.which the Factory selected, not because it was equal to the N5…but because it was hotter to prevent cold start problems and fouling problems that had been reported. .(again the N11YC…with extended tip and copper would be the better improved plug). You see in the Service Bulletins this was for protection of “oiliing up”, (fouling) in slow city traffic and in the earlier bulletin cold start issues. The Champion range is hotter as the number goes higher, so the N12YC, often used back in the day, is a step still HOTTER, not colder.:.Colder would be the N9YC only for faster rev hiway touring use, but subject to fouling in town. (thus the Factory “choice” of the 11 in the SB) Champion has closer heat ranges per plug. NGK covers a wider range in one plug. Most will use either the NGK BP5ES (a bit hotter…if mixed driving, or running rich or burning oil) or the BP6ES a bit colder if hi way, higher rev, clean engine burn. So while Champion has about 5 plugs to cover the range, NGK has 2. (3 if you add very cold NGKBP7ES…only for sustained hi speed) . The iridium plugs are really not suited nor recommended for the older engines…they are designed for todays computer fuel injection, electronically controlled engines. …Sparky Nick

I was taught to use a ‘hot’ plug in a cold (low power) engine and a ‘cold’ plug in a hot (high power) engine, confusing as it seems! These names refer to the plug’s ability to transfer heat from its firing end into the cylinder head. A cold running plug transfers heat rapidly from its firing end and is used to avoid overheating where cylinder head temperatures are relatively high. All makes sense until you find manufacturers have codes going in opposite directions! Champion confuses the situation further by having two scales with 53 being cooler than 7: 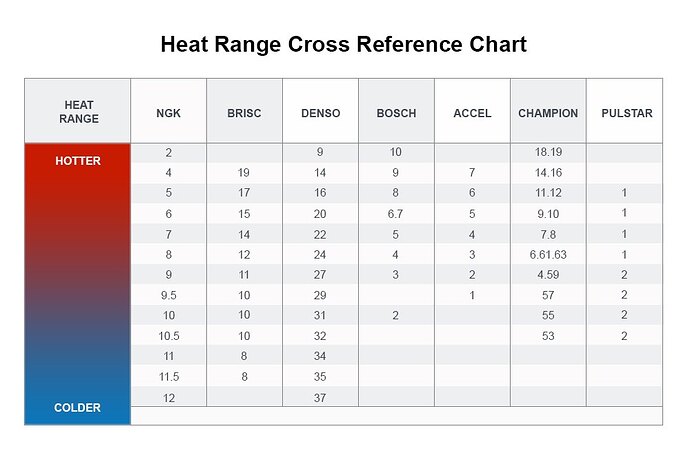 Unfortunately I didn’t take notes, nor do I recall what I checked when my head was off. I do recall that some different, supposedly correct plugs showed some thread into the combustion chamber - not ideal due to possible hot spots. Also, it is possible to extend an electrode without always increasing the heat range - this is a brand specific manufacture decision. A longer reach effectively advances timing and the current desire to put the plug nearer the center of the chamber. The Jag plug angle and location seems quite poor, which is why I clocked the plugs, even though most engine builders say it’s a waste of time. I did make a “map” of the electrode direction for the future. I know some old engine guys ditched super short electrodes and found some benefit due to even these tiny differenced in flame front travel. That’s the kind of stuff Smokey Yunick and the like would do (the Chevy “44’s” had a real short reach). I do think the threads showing is a bad idea, even if my other ‘ideas’ are bunk.

The Jag plug angle and location seems quite poor, which is why I clocked the plugs, even though most engine builders say it’s a waste of time.

On a naturally-aspirated engine…it is! That said, nothing was lost in your efforts.

How does one “clock” plugs? I assume you have a bunch of different thickness washers, or is it trial and error to find the right plug for each cylinder?

clocking has its advocates…Coil polarity as well…spark should flow from center electrode to the the outer. Some say quite a bit of improvement in this being so, but not noticeable problems if not. Another issue is resistance in the primary wiring, and or in coil to distributor. Resistance in modern extremely high electrical energy modern cars is vey high to protect the sensitive electronics from RF, but his resistance is too high for the XK engine. Plug wires should be quite low resistance, and if no radio, zero resistance or close. Sometimes an error can be made in doubling of the resistance supressors installed. As to the chart above…the Champion 11 or 12 are on the hotter side…and compare to the NGK5, while Champion 9-10 are colder and compare to the NGK6 range. Simply think…if the engine cylinder (not coolant temp) will be running fast and hot…it is like being in a hot room…you want a cold air conditioner to get rid of the heat…ie a cold plug to transfer heat away. Err on the cold side…worst case is it fouls, gets sotty or oil fouled, easy fix. Too hot means too hot…a piston top or valve can burn…actually quite easily, quite quickly…faster than you may think. A drag car can burn thru in seconds.
Nick

An old Ford “Shop Tips”, back in the points / condenser era, noted that advancing timing cooled the mixture (before any detonation), but heated the plug up, so they advised cooler plugs hand in hand with advanced timing.
An interesting note about Smokey Yunick. One of his engines shown in an old Hot Rod magazine had little holes in the headers. At the time thermocouples for exhaust temp in individual cylinders were relatively unknown to hot rodders. The picture needed to speculate what “Smokey” was doing drilling holes in his headers.

But what is wrong with the original N5 spark plugs. Does nobody consider using them and why not? 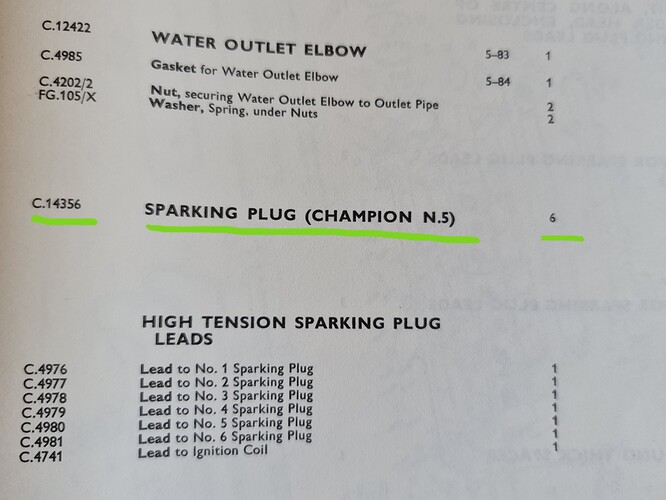 Did anybody replace them with what and why? I would have thought, when they are listed in the owners manual and spare catalogue they would be correct for the engine.
I know that many do recommend NGK BP5ES but those were not original and would be only an alternative

But what is wrong with the original N5 spark plugs. Does nobody consider using them and why not?

The various posts in this thread document the factory’s claims to switch to N11 to avoid fouling in stop and go driving. But I never got the memo until now!

Back in the day, we did an “Italian tune-up” once a week, which was to hit 100 mph for a few minutes on your favorite unpoliced highway to clean off the plugs. Anybody else remember that? No I’m not making it up.

My owner’s manual hasn’t changed since it was printed in 1967, amazingly enough, and still says N5 today. So, when I go to my favorite auto parts supplier, I look at the latest cross-reference chart to see what’s the current replacement model, which was N5C last I checked. (I have a full set of tune-up parts in the bin, including these plugs.) That’s what I’ve been running since forever, and N5 before that. I don’t have a cold start problem, so, after 50 years, I’m okay with the current variation of N5.

How does one “clock” plugs?

Many, many varying thickness of copper washers.

You mark on the plug bidy where the ground electrode is, then “clock” them in the same position.

I did it on my Datsun racer, but only because the crowns of the13:1 Cosworth pistons only cleared the plugs by 0.010".

And now for something completely different… triple electrodes: 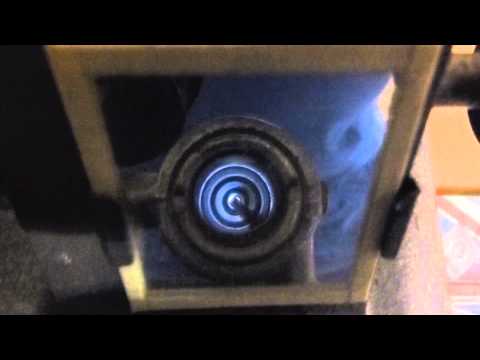 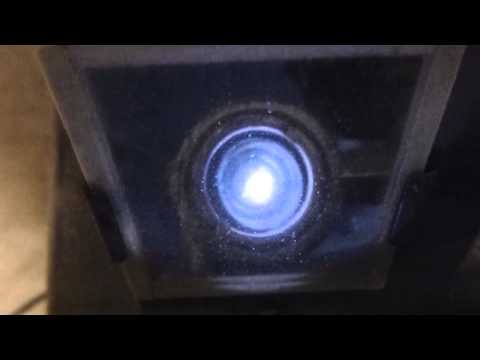 supposedly correct plugs showed some thread into the combustion chamber - not ideal due to possible hot spots.

What was the “noticeable difference?”

Hot and very cold plugs. One is a BP5E S and the other a Champion C59CX. The latter is a plug I used when I raced and is really cold as you can see how short the center electrode is. The ground electrode comes this way - you could not gap it. In high CR engines the ground electrode can glow red hot so the less the better. There are plugs available that have no ground electrode - you just need enough volts. I ran leaded gas 112 octane, and the plug would last between 9 and 10 hours before it started to misfire. It comes with an index mark. 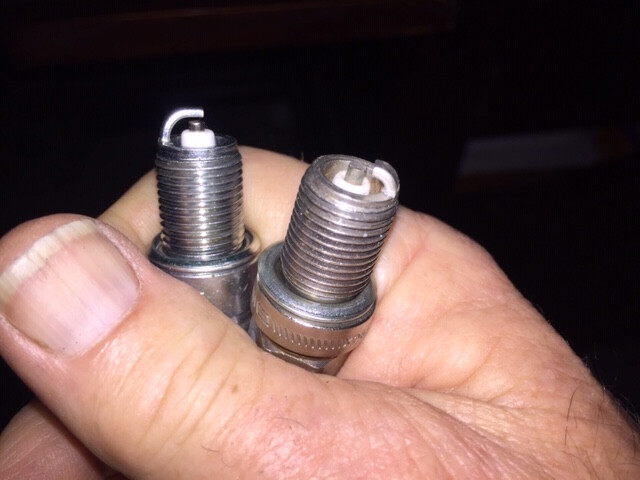 N5 or N5C are fine…and many N5C can be found on ebay. One would like to think that in 40 years the technology of the plug manufacture would have improved, even is kinda the same…but…given products we see daily today…the reverse is likely. Italian tune ups were common among my group of car friends back in the day. I had straight thru pipes with a resonator on my XK120 then…and after being in town for cruising at night, I’d head out of town and run it up thru the gears nearly to red line…and see the glowing orange embers swirl behind me. I will still do that…but my redline now is 3800, not 5800. When shutting down, I do try to run the engine at 2,000 or so in neutral for a few seconds, drop to idle and quickly shut off. Some make the mistake of checking their spark plugs for “color” when their last few miles were at slow city stop and go before shut down. (in the XK120 world we have those who want original as from factory sparkplugs…now that is fun…not only rare but have to be black base and Made in England).
Nick

I tried surface discharge plugs in the Datsun, but at high rpm, they’d cause a misfire… could not understand precisely why.