Yesterday went to the “Best of Italy and France” car show in Van Nuys Ca.
My first time to this show and took the Alfa. Knew that Jay often will show up at this show. Standing by my car and answering questions about Alfa and Jay pulls up next to my car in this gigantic 1917 Fiat Botafogo Special . I was asked to help with placement of cars and was told to make sure cars were parked behind
class # signs. I was not about to tell Jay to move your car to the other side.
Glenn

If I knew how to send photo I would. Just have a picture on my phone of the back of Jays head in car.
Glenn

Great story, thanks for sharing it.

When we attended the JCNA AGM in Long Beach in 2004 someone set up a tour of Jay’s shop’s and we found him to be a very nice person and a true hobbyist! When I remarked to him that he must have of largest collection of Vincent Black Shadows he replied that, I can’t remember the name, had many more!

I can’t remember the name, had many more!

No we’ve been there and they have a huge number of bikes but without looking through the pictures that I took I can’t remember if they had any Vincents or not. As I recall Jay had 7+ Vincents with at least three of more being Black Shadows. There is not enough good things that I can say about Jay. A friend that was with us mentioned to Jay that he was into Hudson Hornets and Jay took him over to his Hornet to show Ron what he had done to it and in passing at the time that we were there EVERY vehicle had a current plate!

He said Jay would come into the store, all the time, and was/is a true car guy, who was warm and open with all.

Until you mentioned show biz, at which point you’d get a cold shoulder.

About 10 or 12 years ago I was at the Barratt Jackson Auction in Scottsdale watching cars go through the auction. Standing next to me was Jay Leno, in his Jeans and Jean jacket. Just one of the guys looking at the neat cars, visited with us and was so humble and courteous to us. I have respected him emmensly ever since.

I had the honor of meeting Jay earlier this year when he invited me to his garage with my custom Jaguar. Got to have lunch w him and he showed me around the garage. He is a lovely guy and he very much loves Jags. 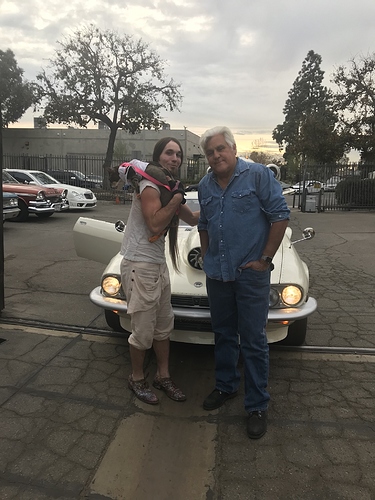 It’s nice to hear about a celebrity who is not all full of himself.

Forgot to mention when at the Best of Italy and France show a 3000 Healey pulls in with the Alfas. I am a British car guy but am thinking what the heck is he doing here? He popps bonnet and in there is an Alfa 2 liter engine. Much lighter and more HP than original. He had to mod suspension because it was sitting so high.
Glenn