Other drivers respond to an XJS

I’ve noticed how other drivers treat you different when you have an XJS … there will be nice comments and stares of admiration, but there will also be the opposite. While complimentary licks are from motorists that understand value and class, the nasty ones belong to another set of … let me call them “idiotic” "mean"and “weird drivers” who only desire to vent their frustration, and inner hate. Let me call these drivers sad.

They gesticulate, point and say all kinds of things when they have no idea who you are … it’s the cat they are after, that’s what … the cat that contours up the best and worst in humans. I’ve had people sail by in a convertible with a long middle finger in the air until they are out of sight … others make complete hand gestures … if you even drift close to some they will feel too challenged and react with a hateful shot of three long connected beeps … you might be perfectly in the right but in their mind and their reality, because you are driving a vehicle of that magnitude , then it’s OK to make you a target.

Of course many will race up close behind to see what you’re driving, then drop back in shame … if it’s not shame then it’s a withering acceptance that you just have a better car. These people normally give up and drop out of sight knowing it’s a non starter.

Which ever it may be, I’ve found other drivers are touched by the mere sight of an XJS and will respond accordingly.

I have much the same experiences, though most of mine have been favorable. I do get some flack and Jaguar jokes from some of my good friends but that’s ok since I know they are just messing with me and the car! I have noticed that even if the guy is not too friendly, the girl in the car is usually more appreciative! Maybe the fact that my XJS 2+2 is British Racing Green with the saddle tan interior has something to do with it!

I had people I was following suddenly jam on the brakes right in the middle of
the highway. Like, anyone driving a Jaguar must have money and/or good
insurance.

Only things I’ve noticed is older men and women really like seeing it out. Thumbs ups and waves, and then anyone in a BMW or Mustang seem incensed and have to go very fast to get away from me. Rice burners with no hoods just scream at the sight of that acre long bonnet I have and then fade into the distance behind her.

My wife thought everyone was looking at her. …until she realized it was the car. …I get a kick at young kids who stare in awe…and oldsters that comment as to how close to the ground it is and how it has really nice lines…

A lot of it depends on location and age bracket of population you happen to be driving through… ie, if locality is populated with youthful bronzed gods who all have their own spare Merc, BMW or Bentley … even a rouge tinted Range Rover charged to by mom and pops account … then look out, they are sure to blow you off in their rear view mirror thinking they are the do all and end all

Years ago, when I had an XJS, I concluded that, for whatever reason, the car had some sort of ‘road presence’.

On several occasions out on the open road I’d be following behind other drivers and, lo and behold, they’d change lanes and clear a path for me. This wasn’t of case of me tail gating or being aggressive…which is not my style. It was as though the mere appearance of an XJS in their rearview mirror suggested “this guy means business”.

One notable exception came on an early morning highway drive when I was ‘jumped’ by a slew of Porsche 928s…apparently club members out for a drive. They snuck up on me a boxed me in! I felt like a lone Spitfire pilot surrounded by a full squadron of Messerschmitts! It was all in fun. They smiled and waved…and then disappeared at a very high rate of speed.

Thanks for that nice vignette … you certainly got my drift, an XJS certainly does evoke fear /admiration / ego / desire / aesthetic warmth and pleasure … depending on mindset of the other party … in an ideal world everyone should want one … ( should want to BE one ? ) they are the ultimate expression

Zen and the art of motorcycle riding

It was actually the art of motorcycle maintenance so the title is definitely more appropriate for Jags, wouldn’t you say?

An added thought … driving across the USA was quite Zen … I’d love to do it in an XJS next time … although if I used I 40 like last time there would be long stretches through TX, NM and across Mojave … now that would be Zen in an XJS but hmmmmm I’d be a little dubious

Went to my library, dug out the book but couldn’t find any reference to ECT? 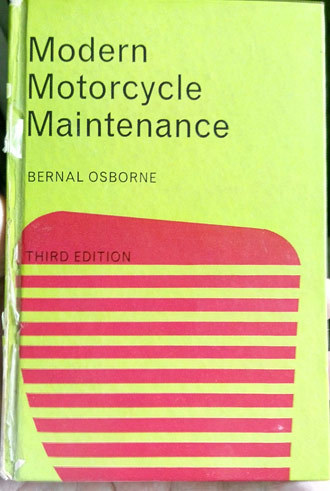 Ummmm, “Zen and the Art of Motorcycle Maintenance” was the original book which @Rudy almost referred to. In that book the narrator undergoes electroconvulsive therapy.

Although some of us may not be on the right page, you’re not even looking at the right book. Have a break, have a Kit Kat.

Ummmm, “Zen and the Art of Motorcycle Maintenance” was the original book which @Rudy almost referred to. In that book the narrator undergoes electroconvulsive therapy.

Ok, I’ll take my tongue out of my cheek and keep broader varieties of humour away from the table …

My dad used to get the same treatment when driving his Acura on the freeway. But he was going 35 MPH in the fast lane. How is your driving?

I have never had that treatment in any of my Jags.

My driving is fine … in an ideal world nothing could would or should give anyone reason to vent themselves unreasonably … I can only put it down to the fact that
California has a young population that isn’t afraid to express itself if you happen to be in the wrong place at the wrong time, like in front of them on PCH and they perceive you are holding them back, or they think you’re an old fart trying to be young, or “challenging” them in some way, bizarre as it sounds.

( it’s the XJS remember ? It has that effect on people … it makes them sit up and act in "different " ways … not everyone, but it does some )

Some years ago I had a red XJ12 that was only a few years old, I was cruising along the freeway in the fast lane and I was already at least 10 over the limit, some fool got behind me and I couldn’t move over quick enough because there were cars in the other lane, so this person (in a Cadillac) crossed three lanes and blew around the cars that were blocking me , moved back into my land and slammed on her brakes at about 75, and almost caused a multi car pileup. She did this two or three more times, then crossed 5 lanes of traffic and hit an exit at full speed (almost crashed) before I could even react. I don’t know if the rage came from the red of the Jag, but I literally did nothing but attempt to save myself. Crazy.