Paint inside of boot area SS and MKIV

What was the paint finish inside the boot area for 39 -47 saloon?
Body colour, gloss black, matt black?

Also I am having difficultly understanding why the brake drums were painted body colour. It seems a lot of extra effort, by Jaguar, to remove and paint them body colour and as they were rough cast iron so surely they would not have been painted glossy?? Would this not also camouflage the wire wheel appearance so really dont understand this process
Regards, Jordy.

1939 is different from later cars in that the floor and boot lid were both covered in black ribbed rubber. I think the 1940 cars and the MkIVs used body colour in the boot floor and lid.

Here’s period shot of a MkIV that appears have boot in body colour. 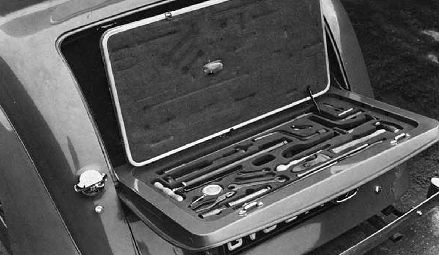 Drums are slightly in the shade. 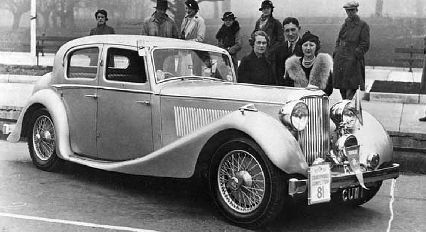 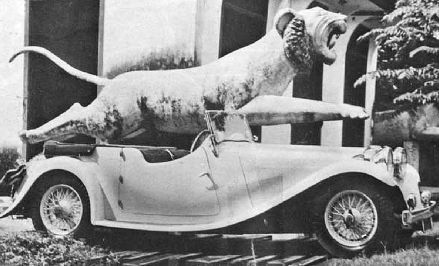 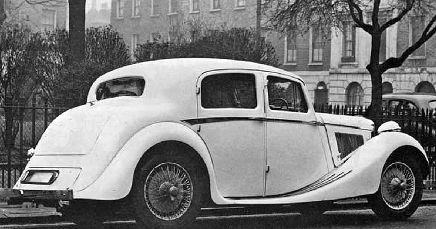 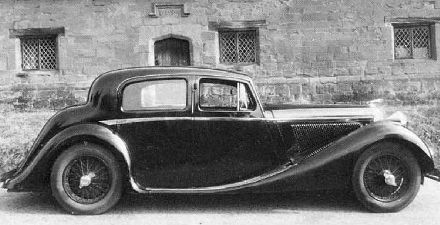 I’m not sure there was uniformity.
Certainly the inside of the boot lid was painted body colour And I’ve usually solved other aspects by painting the cars black, which fixes that question as it also does with the colour of thechassis on SS1s and SS100s.

But why I say there wasn’t uniformity. When I look at the under side of bonnets, i see most in body colour but have seen MK IV bonnets with the under side in black , Which would have meant extra time masking off louvres

In the ceantre pic of Peter’s it’s interesting that the 1936 saloon has what appear to be SS1 head lamps.

Peter,
Your Mark IV ToolKit photo?
Can you advise source (for a better copy?) and also any idea of cars identity and/or date?
Still refining my SS Jaguar and Mark IV/V tool-kit research so anything period original/correct is most helpful, especially if dateable.
Roger

Having recently fitted my Mark V boot lid back on, and having taken note of many anomalies and peculiarities in evidence of the factory’s workmanship in the first fitting, such as bolt holes enlarged by a gas torch and the scorch zones still visible, and tapped mounting bars for the hinges not painted or even primed at all, I can testify that the boot lid was fitted and left in place before the body went through the paint line, and this is the reason it is body color inside. Easier to paint, no masking, and they painted the hinges and only a little beyond what would be seen in the finished car. Doors too incidentally, and for the same reasons, mounting holes hogged out with a hand tool, getting them fitted and lined up correctly, and never removed.
The '39 and earlier may be different in some way of which I am not aware, so my remarks may not apply to them.

The car in the open boot photo was GVC 677. The car tested by The Autocar on 19th March 1948. The photo appears in the road test. I confess that I just copied it from Paul Skilleter’s “Jaguar Saloon Cars” book.

The same car was also tested by “Motor Sport” in August 1948.

GVC was a Coventry registration from December 1947.

Apart from outer frame areas of the boot lid and body opening I think the 1938/39 cars had black interiors. 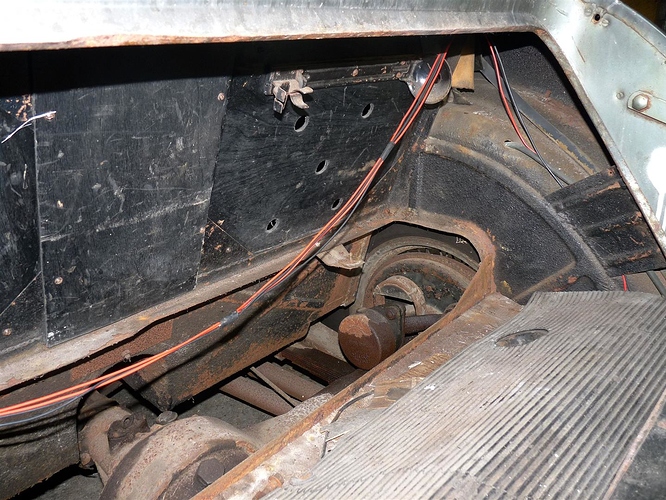 Of course – thanks Peter.

I do have the Autocar magazine, but not sure about Motor Sport – will have to chase up!

All my findings of the past 15 years on MKV’s match Rob’s findings. I would just like to add that during the MKV production although all the inside panels in a MKV trunk as well as the spare wheel well, inner wings etc. were painted (chassis) black, the entire trunk lid, inside and outside, including the hinges and hinge screws were painted body colour, the spare wheel door or lid was painted body color as well, but separately, that is not attached to the car, which is why there were paint runs under the holes on the hinges and no paint on the screws. I think both my and Rob’s car had paint marks on the spare wheel well floor in body colour, because the paint runs on the backside of the hinges were still not completely cured, and thus some of the body coloured paint stuck onto the black spare wheel well floor.

Ps. Not important otherwise, but as there are so few photos of the paint shop, it’s important to understand how the cars were put togethernd then the question of colour suddenly makes a lot of sense.

Were the sides of the boot interior on 1938-48 saloons and DHCs covered by plywood panels painted black?

I can confirm from inspection of two very original 1939 cars that there is a 1/8" plywood lining on the side walls. The round connector box is mounted on top of it. 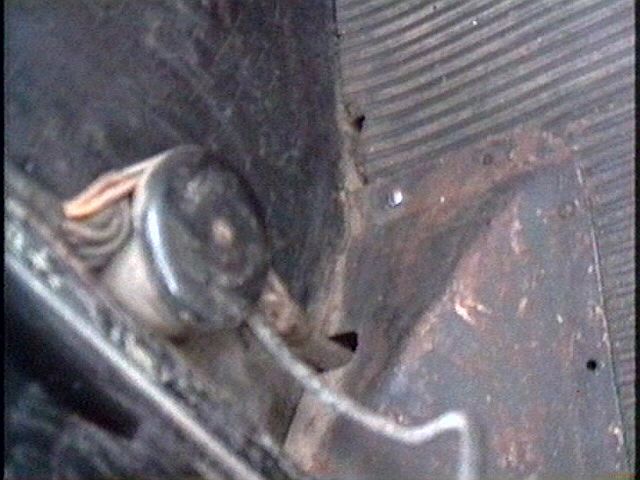 Peter, what’s that bracket thing on the back of the seat? It looks like it could hold a jack? Do you know the chassis number of this car?

It’s just the cradle for an accessory fire extinguisher. Not a standard accessory. 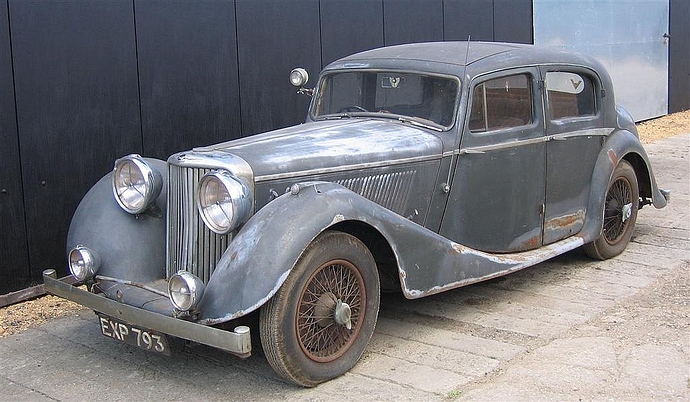 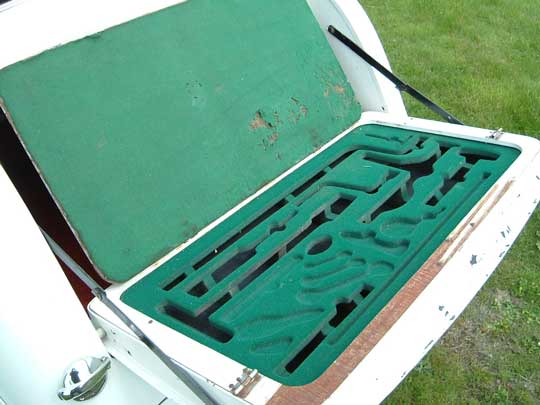 Roger, what’s you best guess as to the change-over date from black to green flocking on the tool tray?

It’s not quite as clear cut as that as you’ll see from the three above there is more than one type of green tray. (Compare with your own green tray and mine.) The ones above have a more sensible higher jack arm but sacrifice the screwdriver. Your black tray has the worst of all worlds, low jack arm and no screwdriver.

Thanks again Peter. I found tiny screw holes so apparently I had the plywood on the sides as well, though by the condition of the p-clips it looks to me like it must have covered my round terminal box unless there was a cutout for it. 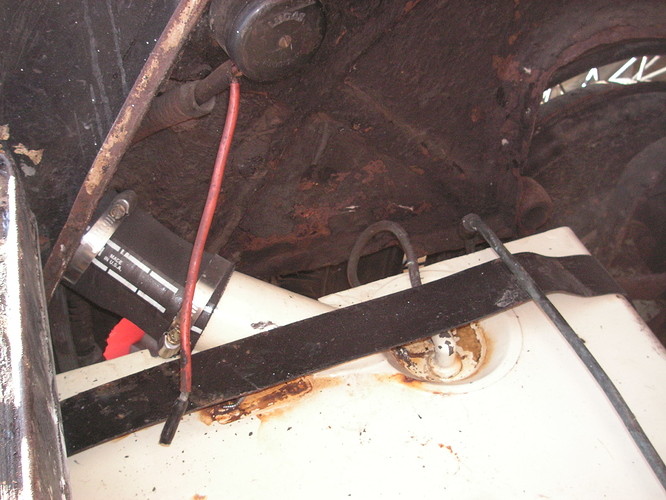 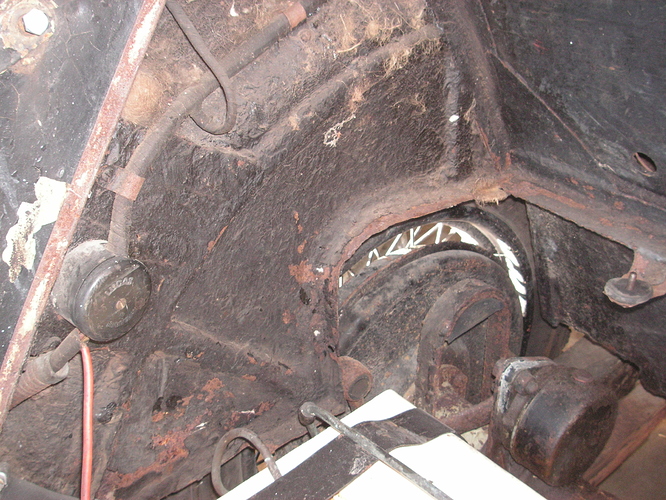 Ron,
As you know I have been working on a book chapter on SS Jaguar Tool-Kits for some years now, indeed pretty well finished the Tool Tray aspect, and indeed stopped current work on detailing all the Tool content, to provide this forum response.
But where I am at, is that over the SS Jaguar period 1936MY to 1940MY - and I use Alan Crouch’s style of Model Year identification which is best/most correct I have seen, SS-Jaguar Tool-Trays were initially black-painted plywood, then black-flocked and finally green-flocked - so actual three changes in finish.

But over this 1936MY to 1940MY period I identify some NINE different Tool-Trays, that I catalogue (for purposes of my book) as being Type A, B, C, D, E, F, F2, G and Type H, (with post war Mark IV being Type I and I2). This does include the more vertically oriented SS Jaguar Tool-Tray, but still eight versions of the boot-lid mounted Tool-Tray as fitted to Saloons and DHCs, (and of course SS100 having a Tool-Roll and Tool-Locker not included in the NINE count).

Getting exact demarcations is difficult, as the ‘authenticity’ standard of restored tool-trays generally is pretty horrible, so I usually discount anything restored as being reliable evidence, especially if restored much more than 10 years ago when pretty well anything goes attitude prevailed re authenticity, thus the Red velvet tool trays, the home-made tool inclusions/patterns, and the chrome-plated spanners etc., unless of course there are pre-restoration photos available.

But the black-flock to green-flock demarcation, I still can’t improve on an exact month demarcation, any better than I communicated to you directly before, albeit before publication I will totally review any new evidence I have, albeit nothing new yet re this demarcation.

Having said that, I do monitor any new SS Jaguar findings, in case they can add anything new or different to the overall jigsaw puzzle, thus I asked Rob directly about his 1938MY Saloon Tool-Kit, which he then also posted the picture on-line that initiated this current on-forum discussion. As I offered directly, his 1938MY tool-tray is not remotely similar to any of my now ‘catalogued’ nine versions of SS Jaguar Tool-Tray, and there is no evolving development from a 1937MY to 1938MY to 1939MY logic in it either. Maybe a one-off experimental/prototype, which I think totally unlikely, as there are just two many things ‘wrong’ with the inclusion and exclusion of tools (recesses), and the standard of workmanship does not appear to be up to SS Jaguars usual standard, so I have to think just yet another home-made effort, where owner either didn’t still have his original to copy, or maybe just wanted his own personal arrangement, whatever. But always a chance a second seemingly original example may one day surface - if and when that ever happens, maybe then it might be a possible to consider a Tenth version Tool Tray to add to my now current catalogued nine.

The included SS Jaguar tools - should have this finished as best I can, hopefully by end of this month - including the Jack, noting the speculation included in this discussion, without giving anything away prematurely.

Thus also my appeal to anyone who can confidently comment on the specific purpose of the two Box Spanners, C178 and C305, described as for Shock Absorber bolts and for Rear Axle respectively.

The C305 is a real ‘special’, again a short 3-1/4" long box-spanner, but with an external 1/2" x 1/2" square end that suggests should fit into a square female plug (or similar), with the other end a normal internal hexagon, but a non-standard .580" across-flats dimension. Again what is there on an SS-Jaguars ENV rear axle that these two box-spanner ends fit.

Its hard to believe SS Cars Ltd would have commissioned and provided two box spanners without a specific purpose/function in mind.

On the topic of “home-made” one-off tool trays, attached is a photo of the tray in '38 DHC 46037, which you have no doubt already seen. This car was sold to a new owner last year

I eagerly await publication of the results of your monumental research on SS-Jaguar tools.

I found tiny screw holes so apparently I had the plywood on the sides as well, though by the condition of the p-clips it looks to me like it must have covered my round terminal box unless there was a cutout for it.

There are cut-outs to let the harnesses come and go but the box is on top of the plywood. Sorry about the image quality. I’m snatching frames from video.