Use a lot of rubber grease and it’s still a struggle …… no wonder on the two cars I’ve completely rebuilt I had so much “fun” getting the tank bolts in …… I was completely unaware of the thickness issue …I just fitted what I was sent big sngb …….

I need to replace the fuel over flow hose. think I can source that from FLAPS or Hardware? it will rarely if ever see gas inside it. It’s pretty obvious when you’re pumping as it nears full.

It is very thin wall tube and it runs between the tank lip and inner fender well. And there is a witness mark on it where the tank lip rides. That’s how tight this stuff is.

try a thick and a thin.

Folks,
help me think this through. If I get some thin ones and put them on the bottom, will the tank sit lower or will the sleeve keep it at the same height as stock

It might sit a hair lower. It depends on how much larger the combined thickness of the fat ones is, in relation to the sleeve, and whether at reasonable tightness, the rubber squishes to the limit created by the sleeve. The sleeve is a limiting factor.

When renewing the filler hose, look for one that is more flexible. Most of the hoses sold by the usuals are a right PITA to install. Pegasusautoracing.com (and I’m sure others) sell a composite filler hose with a fluorocarbon rubber (FKM) inner liner which works well. I would rate this in the ‘expensive but worth it’ category.

thin ones and put them on the bottom,

Soap up the hose and tank, the soap eventually evaporates ,slide the hose all the way up or down can’t remember which , have the hose clamps in position and oriented for access.
tank in ,hose on , do up bolts later . Make sure your hose coupler is not to long who knows what they’ve sold you
Cheers

I bought a filler hose from one of the usuals as a just-in-case-I-need-to-replace-it item to put on the shelf. It’s 5" long, 2-1/4" ID, with 1/" thick walls that are spiral wrapped with a double layer of reinforcing fabric. On the outside it’s labeled by the manufacturer as “Fuel Filler Hose” so clearly designed for use with fuels. It’s a very robust item that I suspect was designed to connect the fill pipe to the gas tank under the car and thus exposed to damage on a newer car. I suspect it will be a bear to install should I ever need to do so. 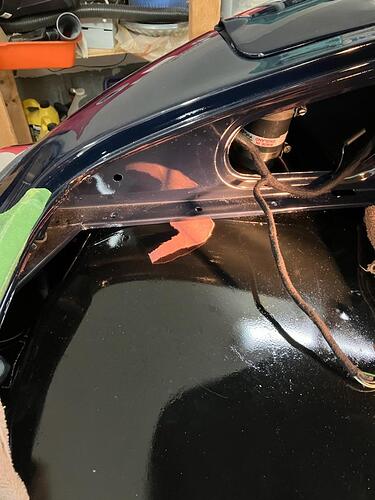 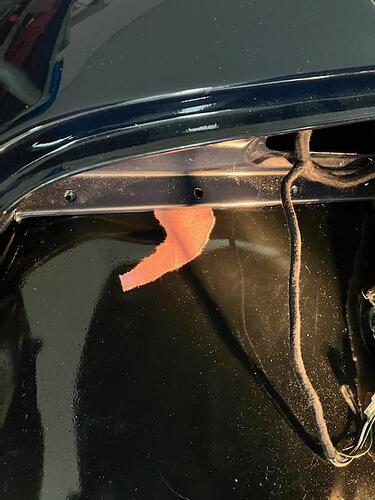 Does everyone’s tank fit this snugly? I can just barely fit that underlay paper between the tank and that metal ledge.

Lessons I may have learned for anyone who searches this link later:
I wish I had put short rubbers on the bottom of the tank.
You can use longer bolts but don’t cheap out and just point them, I found. I shaved them back to where the threads ended on the original bolts. Because if the thread is longer it will stop going in when it hits the thread and it will be difficult to get the right angle on the forward left bolt; by that I mean you can’t get it perpendicular to the thread. Cut a recess in filler hose so you can slide it all the way up past the fender drain…so you can slide the tank under it. I also trimmed about 3/16 in off the bottom on the side that would face the tank as I slid it in…so the tank could slide under. It almost popped on but, about 1/2 inch of the radius was caught, folded above the tank lip to the inside. I found that a long pry bar with a bent head was just able to reach down from outside the car through the filler neck and pushing on the rubber just above the tank metal, was able to pop that section of hose over the tank filler neck. Dumb luck. Also, as many videos advised the method of tipping the tank in down and forward then sliding left, that got me close but on my car I was jammed until I rotated the tank clockwise about 10 degrees then the rear lip cleared and the tank was able to go down in the back.
as someone here suggested, silicon or liquid soap on any thing that has to slide like, the rubbers and tank neck and inside filler hose.

Does everyone’s tank fit this snugly? I can just barely fit that underlay paper between the tank and that metal ledge.

This is yet another area where these cars exhibit their “cottage industry” origins: every one I saw, had a different dimension there.