As I progress on the restoration of my 71 2+2, the engine, transmission and IRS are all complete and sitting awaiting the rework of the body. I am lucky in that, as far as I am aware, there are no major rust areas to deal with. The PO took it back to bare metal and guaranteed it to be rust free.
Time will tell though.
Since I’ve had the car, it has been stored in some less than ideal areas. Sometimes we just have to deal with life events as they come to us.

I am going to be taking the lower interior and underside down to bare metal. My assumption is that there will be rust in the seams and I’m looking for ways to neutralize places that are inaccessible before priming it with an acid safe DTM epoxy primer.

There are many items available Evaporust and others with phosphoric acid in them. I’ve used the Klean-Strip prep and etch before and have been pleased with it.

Not to keep beating a dead horse. Just looking for thoughts and advice from those that have been through this.

Used Devoe 167 penetrating sealer. On all seams
Runs through them. Drips on the floor. Recoat with epoxy before it sets up hard. I did the inner roof also. Wouldn’t do it any other way…

Looks like a good product and not too expensive. I will put in on the watch list.

I’ve used Ospho on ships to stop surface rust. No problem to paint over treated area. Just used it again on dime size chip area on my bonnet.

I’ve used the Klean-Strip prep and etch before and have been pleased with it.

That product I’m pretty darn sure has a detergent suffacant in it. This is fine, but should be cleaned off before paint. I liked it as it is readily available, inexpensive and works well. the ppg 579 (?) is sure to be OK, but of course is expensive. You follow with 520, which is similar - ppg does say this product has a suffacant. These numbers may be wrong and the recipe may have changed, so yrmv.
Did several cars this way and is proven over years of exposure. Always coated with ppg products, no bleed throughs or lifting. Surfaces cleaned before paint after acid use.

Surfaces cleaned before paint after acid use.

Do you have to wash it off with water before solvent, then paint?

Looks like a good product and not too expensive. I will put in on the watch list.

Google is your friend
https://www.devoesuperstore.com/devoe-pre-prime-167-penetrating-epoxy-sealer-100-solids-1g-4

I don’t like water. After the “cheap and good” Kleen-Strip I use the ppg and really clean with wax and grease remover. My brother in law has experimented and favors the new style wax and grease removers. I use the old ppg which is no longer legal in states where they are concerned about evaporation (even in the tiny amounts typically used).
Years ago I wrote to ppg when they used to answer by mail sensible questions. They replied that it was OK to paint over the powdery residue from the 520 style treatments.

I use that Kleen Strip but I was always told that after an acid prep product you needed to neutralise the acid by water wash then dry ASAP to prevent flash rust.

What dilution do you use for the Kleen Strip?

So I have been using Piclex-20 which directions do not include a water wash but W and G remover only. But it’s like $70 A pint. Too much to do the whole car in.

Glad to hear you have success with Kleen Strip and not water washing first. I’ll have to try it without washing on some small parts.

what dilution are you using with the Kleen Strip, I was using 3 parts water/1 part KS

I built a recirculation contraption under the rotisserie. Evaporust was recycled using a small sump pump. Warm is good with Evaporust…there’s a heating pad under the catch can for the low spot/sump. The pump sits in that sump. I did it in the summer, so it was warm in the garage.

Sills and voids first. Fabricated several wands from stiff poly tubing…drilled 360 spray pattern along the length of the tube. Hooked the tube to sump pump via hose and sprayed/wetted surfaces literally for days. The Evaporust was seeping from the seams. Then I rinsed with diluted Purple Stuff . Force dried with heat guns blowing hot air through the voids. Scoped the voids and they were all perfectly clean. Then Boeshield T9 until it dripped out between spot welds. After Boeshield was dry…Wurthwax.

When the voids were done, I sealed them up and cleaned up exterior sheet metal with Evaporust. The tub section was rotated as necessary to keep every surface wetted until the rust melted away. Clean metal was treated with Metal prep, then rinsed and dried (heat gun where appropriate)… Epoxy was applied shortly thereafter…catalyzed urethane primer applied during open period for the epoxy.

A recirculation table was used for the bonnet sections. Side doosr and boot door were sent out to a shop that used large Evaporust/chelation vats.

No encapsulators and no converters. I’d have likely used the Devoe penetrating epoxy (had it been available at the time)…but only after cleaning voids and seams with a chelation product first.

Photos of Evaporust table, the catch/recirculation system under rotisserie (cleaning sheet metal), wand spraying one of the voids. 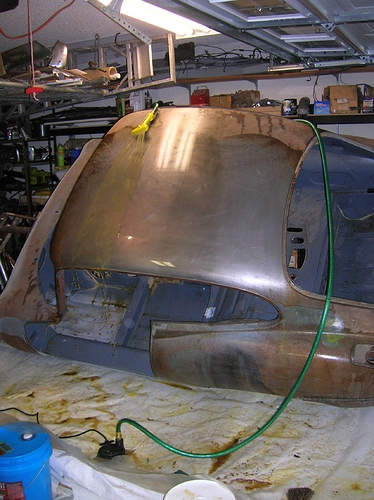 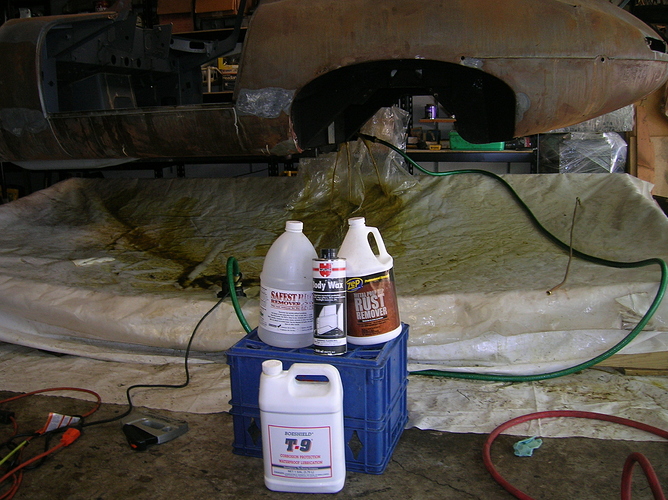 The ideal for optimum mechanical bond with the epoxy primer coat is abraded, chemically clean metal with no residue of any kind. Phos acid is great for etching but ideally should be rinsed off the surface with clean water and then towel dried immediately, followed by compressed air blowdown before final solvent wash and primer coat. Flash rusting happens if not done quickly.

what dilution are you using with the Kleen Strip,

Used it straight, maybe shouldn’t, but did. I didn’t use it extensively as only found it late in the restoration. Keep in mind the car was dipped, so some of this discussion doesn’t completely apply to my situation.
As Nick says about epoxy prime, the response I got from ppg was so long ago that it predated the common use of epoxy prime. No way would the paint companies want ANY odd things under their paint now. If I judged the “film” or reacted surface to be stable (won’t come off or alter except if sanded) I painted over it like I did years ago with older primers. While the Jag has no years on it the kid’s Merkurs were “college cars” and subject to quite a few years of sitting on Madison streets and sitting outside on our driveway before that. The ppg single stage and primers held up great - other parts not exactly Toyota quality.

Used phosphoric acid for farm use. To clean rust from the gas tank. Poured 5 gallons in and turned it every couple hours. Flushed with water and let a blow dryer blow in the tank until good and dry. It leaves a phosphoric coating on the metal
Inside of tank looks perfect after 4 years no sentiment in the gas bowl 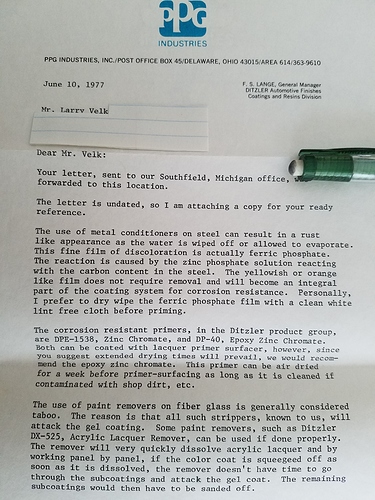 Used phosphoric acid for farm use. To clean rust from the gas tank. Poured 5 gallons in and turned it every couple hours.

I buy this stuff for rust removal. I’ve used it neat for heavy surface rust, or heavy diluted for light stuff.

But, as Nick mentioned, I rinse it with water while it’s still wet, then towel dry, then DA the surface, then wash down with water bourne wax and grease remover before epoxy primer.

I use Southern Polyurethanes epoxy primer, and they specifically caution against the use of acid products, unless careful steps are taken to prevent ANY acid residue.

Any bare metal paint job I did prior to a half dozen years ago, when I resprayed my E-type, pretty much followed the advice in your letter, Larry. I’ve had my fair share of adhesion related paint failures over the years but they’ve been mostly minor and usually related to insufficient cleaning. My usual practice was to spray diluted metal conditioner (aka phos acid) onto the bare steel, let it sit for half a minute, then wipe it off before it could air dry and the steel start to discolour, followed by primer. That seemed to work. It was on the advice of @Clive_Wilkinson, based on his extensive experience in optimum auto paint adhesion technique, that I added a clean water rinse/immediate towel dry/compressed air blowdown to the procedure. Rigorous solvent washing a given.

The first bare metal respray on my E I did 36 or so years ago, following the same basic technique I’d used a few years earlier doing up an MGB, that is acid etch followed by red oxide primer then multiple coats of acrylic lacquer cut and polished to a high shine. Though they looked great for several years both paint jobs eventually crazed with some subsequent minor edge lifting. I resolved the second bare metal respray on the E would endure far longer, not wanting to do a third strip down etc. So, this time the focus was on getting things absolutely clean prior to shooting epoxy followed by 2-pack high build urethane primer under single stage urethane. The urethane closely replicates the spectacular appearance of cut and polished lacquer but, unlike lacquer, never gets brittle.

Long post. Every paint job looks great when it’s fresh. If you want your paint job to keep looking fresh over the next several years then you need to focus on clean to optimise adhesion and use the best quality coatings designed to endure. My 2c.

Edit: I’ve just recently done up a full body respray on my 120. Posted this in the XK forum yesterday:

Tractor Supply: one of my favorite department stores, for sourcing supplies for fine British automotive restorations.

In my opinion, this is a great combination of materials for longevity, which also results in a more ‘period correct’ appearance, as opposed to base/clear.

Tractor Supply: one of my favorite department stores, for sourcing supplies for fine British automotive restorations.

We’ve only had them out here for a few years, but yes, they are great.

I did half of my Xmas shopping for my 5-year old son there. They have the coolest selection of toy cars and trucks! 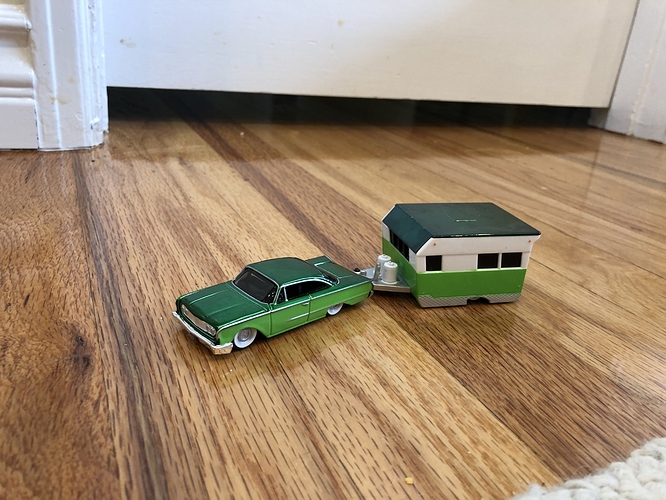 I used both this time around, that is epoxy-urethane high build-sprayable polyester-epoxy sealer-urethane. My bodywork tolerance was +0/-1/16”, and getting those 1/16” depressions filled is best not done with urethane high build, because unlike polyester primer the urethane primer must be applied in multiple film builds over several days to ensure a stable cure. A sixteenth of an inch of filler doesn’t seem like much but it’s actually considerable - 62.5 mils. Recommended dry film thickness of urethane high build is 2.0-2.5 mils, so to fill 1/16” with it you’d need to apply multiple coats allowing a day or so between to flash off its solvents before scuffing and recoating. Expensive, time consuming and messy. Spray polyester, and polyester finishing putty, is better suited for the job, requiring far fewer applications to achieve a level surface. The disadvantage to the stuff is its porosity. It absorbs water. Wet sanding not recommended, strongly discouraged actually, because it can trigger bubbling and lifting of the topcoat. I dry block only. When the blocking’s done there will be areas of the body where the various layers of epoxy, urethane high build and polyester high build are exposed, the latter where the fill is a full 1/16” thick, and feathered edges galore. Before spraying on the topcoat I seal the entire car with a coat of epoxy to lock in and stabilise the various layers.