As part of the resurrection of my '90 XJS convertible I plan on upgrading the Teves III system to a Teves IV. Miraculously I have managed to source almost all of the parts, so now I am looking at finding diagrams/pictures of the IV system. Whenever I try to search for brake systems, all that show up are Teves III. I have Alan Erickson’s old jag-lovers page, which was helpful, but some diagrams would be helpful. Anyone have any pointers?

Not really sure if I can help, but if you tell me what pictures of an in situ Teves IV system looks like, I would be happy to attach photos? (I have a 1996 XJS)

Teves 4 mentioned in the topic below:

Teves Mark III? Lowball him, he accepts offers. (I have no relationship with this seller)

yes, it’s mentioned. Only to the point of since nobody ever reports any problems we won’t be talking about it anymore. Pretty interesting thread, too bad it didn’t seem to go anywhere.

Does anyone have a pointer to an online parts diagram for 96,97? I’m really running into a wall trying to find anything.

That was a good pointer, thanks! That’s the best parts catalog I’ve seen yet.

The best system diagram I’ve found so far was in the '96 XJS technical update.

Paul,
Can you be more specific about which Diagrams and/or pictures, parts you might be lookin for? 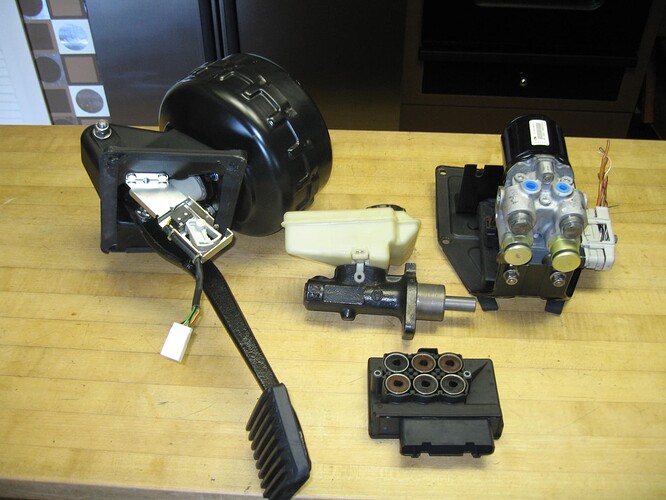 The item at the bottom right of the components picture is actually the controller solenoid unit from the bottom of the ABS Unit. You can see where the ABS pigtail plugs in, and on the bottom is the unit Identifying number - LNA 2210-AA - the only one ever used on the XJS.

I tracked down a version of the EPC which gave me some clues on how the TevesIV system is put together. The parts diagrams are basically what I was looking for.

Your pdf was great, I didn’t run across that in my search. Are there additional parts to that?

Do you have these electrical guides? 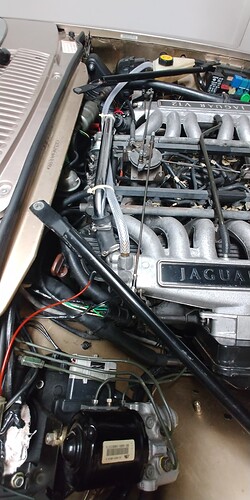 That’s all extremely helpful. I’m about a year out from starting this project so any other pointers would be really appreciated

The sketch / depiction at the front of the document shows the layout for the RH (British) version - just flip it over for the LH version. The rest of the document has good information - Become familiar with it.

Do you have more writeups on your conversion? The intro ended on a cliffhanger making me really want to see the next chapter.

There is more to come, but in the meantime, the following is something to consider before getting too deep into this - another posting of mine from a similar thread:

The pedal box, the pedal, and the dual function brake switch are unique to the XJS and fit in my wife’s '92 XJS perfectly, but was close clearance at the forward end of the fluid reservoir too the hood / bonnet underside support member with the hood closed - that has not caused any problem. I did have one complaint from a person with an '88 or’89 that said he could not close his hood fully without some interference - as I recall about 1/16" to 1/8" at the seam of the hood and the fender on the left. I did offer some suggestions on how to resolve that, but he said something about returning to the Teves III - apparently not fully removed. I never received any further response from him about what he decided to do.
That brings me to the suggestion that the first thing someone who is considering this project for a pre-facelift car, do a test fit of the assembled pedal box with the booster, and the master cylinder with reservoir attached. If you do have some interference between the forward end of the fluid reservoir and the hood, placing a 1/8" washer on each of the upper two of the pedal box mounting bolts should lower the front end of the reservoir by about 1/4". You should not need that much, so start with thinner washers until you get what you need. The other option is to “dimple” the bottom of the hood structural member at the point of contact with the forward point of the reservoir.
I don’t know what causes this difference, or if it just exists between the pre-facelift XJS and the facelift XJS cars. As far as I know, there is no structural body difference in size or angles of the engine side of the firewalls of the pre- facelift and facelift cars – perhaps just allowable manufacturing tolerances.

As far as Teves IV parts commonality with other than XJ’s of the same vintage (Booster and Tandem Master cylinder and not the reservoir which is unique to the XJS) I cannot be of much help. If you get the actual manufacturer part number of the part you are looking for, you may find a lot of matches.