Play in rear wheel - is this normal? With a deviation into Diff preload

Hello experts, I just rebuilt my IRS on my 86 XJ6. I changed the output shaft bearings, u-joints, and inner and outer hub bearings. I used a gauge to measure end play and believe it’s in spec. However, I have play on the driver and passenger side tires.

Here is a link to a video that shows the play. (I wasn’t sure how to embed it directly)

Is this normal or did I do something very wrong?

Thank you in advance!

However, I have play on the driver and passenger side tires.

**
How and where did you measure the play, Adam?

It’s quite a lot of play there Adam, and it looks like the wheel bearings to me.
If it was the output shaft or the U-joints you would have play at 12:00 / 6:00 o’clock but not at 3:00 / 9:00.
or maybe it’s both?
Could it be that the bearings were not seated properly on assembly?
Maybe you measured wrong?

With a helper go under the car and see if you can detect movement at the output shafts.

That seems to be the way to go. I tried for ages to get the end float within specification at the same time as negligible wheel rock. In the end my shop advised me to adjust the spacer thickness until the end float measured zero.

Looks like a bit too much play to me.

Where exactly is the end float measured anyways? On the circumference of the hub?

@davidsxj6 - at the center of the hub.

I found this helpful 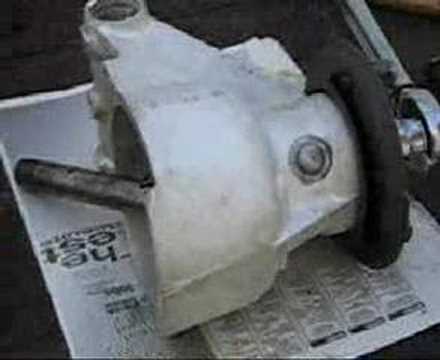 How do you pre-load the bearings when there is a spacer preventing over-tightening? On my classic mustang, I believe I tightened the axle nut until there was resistance on wheel rotation and then backed off enough to get the cotter pin installed. Could a similar technique be used?

Thank you again for all of the advice and feedback.

Here is another video. On the driver’s side, there is essentially no end float and just the slightest resistance when turning the axle by hand. it seems the play is left to right, not front to back if that makes sense. You’ll need to zoom in to see the axle movement.

Is there a chance I got bearings sent that aren’t the right size?

Thanks again for any thoughts and feedback.

believe I tightened the axle nut until there was resistance on wheel rotation and then backed off enough to get the cotter pin installed.

Hi Adam, from memory the big castellated nut must be torqued to 160 lbs-ft. I had to ease the surface (wet/dry paper on table top) on the nut to get the split pin lined up and the torque correct. The shim system determines the free play. This can be set with the hub in a vise but I have just done it on the cars in the past. I had an inspection advisory one year (for my E) and had to fix it for next. Had to source a new shim to bring to spec. It took about three “on and off” cycles to get correct - turning down the shim on each occasion. These can be ordered at correct size if you have the time.
On my XJ6 I had to replace all the hub bearings on both sides. This was just a remove and refit with new bearings - sizes were perfect.
If the movement is more lateral than vertical you might need a helper (per others above) under the car to diagnose all the joints back to the differential - UJ’s etc.

In the end my shop advised me to adjust the spacer thickness until the end float measured zero.

**
That’s exactly it, Adam; when replacing the bearings, the prescribed procedure is to fit a Special Collar with specific ‘shim’ dimension and measure end play. Then calculate the shim thickness required to get the play to specified play to 0,002 and 0,006" This play can also be measured with the hub fitted; pushing and pulling on the wheel while measuring the ‘in/out’ play with a micrometer.

If the play is too large, the wheel will wobble as shown - due to the tapered bearings. The only reasonable explanation is that the shim fitted during hub assembly is incorrect - both sides - and must be replaced. Of course; given that the wobble is not caused by the hub carrier wobbling - which is a different problem…

As an aside; ‘preload’ is the measured resistance against turning - like used on the front wheel, where the hub nut is used to set bearing clearances. Or on the differential, where the nut tightening works to compresses a collapsible spacer to get the preload to a specific resistance - if wrongly set the assembly must be disassembled. On the rear wheels, the hub nut is tightened to hold the assembly together - the shim sets the play. And the procedure is designed to be a ‘one-shot’ operation instead of trial and error…

Adam I’m going to disagree here. I think you’re okay. Go ahead and measure the end float to be sure. You can do this by just taking the wheels off.

Remember we set these up with no load. When you put the tires on and put it on the ground there’s plenty of preload.

Adam - as you will have seen here, opinions differ. Part of the problem at a practical level is that you may have to convince a third party tester (in the UK the annual MOT test) that your play is not excessive if you are to obtain a roadworthiness certificate. If you go in for such a test with the amount of wheel rock as shown on your video you may, IMHO, not get a pass or a pass without an “advisory”.

As an aside, I’m not convinced that “preload” is the same thing as loading sloppy bearings with the weight of the car - but I stand to be corrected on that.

Not sure. But, the 'spacer" migh be intnded to be a “crush sleeve” One time use only. Crush and measure to get preload.

This forum has been so valuable to me since the day I bought my Jag. Thank you all for the feedback.

I think I found the issue. I took off the hubs and did some work. On the passenger side, I was able to sand off about 1/32" of metal off the shim and reinstall it. I tightened the castle nut to give pre-load and remove end-play. This removed 90% of the wobble in the wheel.

I realized I have a completely different issue on the driver’s side. The rear of the hub is worn where the bearing rides. I’ll order a new hub and bearing to remove the slop on that side. Check out the photo, you can see the grove at the end. When I replaced the bearing, I thought that was a normal “seat” for the bearing. I guess not.

The only question now is, end-float or pre-load. Seems like equal opinions on both sides of the fence. I will say this, I feel more comfortable with the pre-load when wiggling the wheel than with .002 of end float.

Thank you again everyone for sending your thoughts over.

EDIT
I just realized you’re talking about the rear and I gave the procedure for the front. The desired result is the same, but the setting and nut-fiddling is all done via the shims instead.

You want a little ‘rocking’ when cold. Your rocking is excessive, as you figured out. Tighten the nut until resistance is felt, spin the wheel by hand a few times in the direction of primary travel to ‘set’ the bearing. This allows grease to move out of the way and may result in needing to tighten the nut a little more. Once the bearing is set and consistent pressure is achieved, back the nut off until a nearly imperceptible amount of play is achieved at the hub. When you mount the wheel the small amount of rocking should be negligible but noticeable at the outer circumference of the tyre. You might have to fiddle a few times- like setting up near-zero float with no drag at the hub which will translate to very slight rocking at the tyre. Any actual drag is bad.

Read page 6 of this document for more info about this.

yeah, I edited. and for clarification I explained the need for end float.

I believe my original end-float was at .002 on the wheel with the good hub. I wonder if my gauge is off a little.