Power Steering Hoses and Rack Bushings at once

no, the difference in color is how strong the poly material is. So under stress, a soft orange one will tear easier than a hard black one. The only reason for the softer orange is to absorb more vibration.

IF installed properly, any color poly bushing would be plenty strong to hold up to the stresses of holding the steering rack in place. Of course, if it’s not installed properly – not properly spaced with fender washers especially – the banging around of the rack would tear up the poly regardless of which hardness is involved.

I would expect that softer might be good, as even red poly is already an order of magnitude stiffer than the garbage OEM mounts.

I’ll bet you’re right, so many bad installations are blamed on parts. I will buy some fender washers to have on hand.

The kit I bought in 2012 had orange rubber and fender washers. That’s the reason it was difficult to get the bushings properly loaded.

Be sure and do it as I stated. Drop the rack. Then do the hoses, especially if you have a LH drive because the hoses will have to be done through the hood and not from underneath unless the rack is dropped and the hoses to the rack can be fitted from below.

Then do the bushings and then remount the rack after having separated the bosses just enough to get the bushings in.

The difference with the tougher bushings are utterly fantastic.

I’ve done battle with the p/s hoses a couple times. The first time was abject trench warfare. Very ugly and bloody. The second time was merely a mild skirmish by comparison.

In the first war of the hoses I bought new hoses that were a ‘revised design’. You know…they look a bit different but “they’ll fit just fine”. That assurance turned out to be as empty as a campaign promise.

In the second war I took my original hose to a hydraulic shop for ‘overhaul’ and thus maintained the exact original shape and configuration. That made all the difference in the world.

O.K., you guys have me scared with this P.S. talk.

The one issue that I know for sure that is involved with my yet-to-arrive 5.3 is something being up with one of the power steering hoses. I have asked the seller what’s up with that, and he so far has not answered me.

Apparently it must not be that bad (of a leak), as he has supposedly driven it to the inspection place as well as to the car wash w/o incident. Before it gets here, though, I would like to know if the issue is with the high pressure hose or the low pressure side one, so I can order it in advance of arrival. Is one of these two more likely to go blinky than the other one?

I got mine out with a pair of sockets and some threaded rod and nuts. However, it is admittedly an iffy proposition, primarily because most sockets have slightly rounded corners that might get cockeyed against the OEM mounts. If you’re willing to take the one socket that’s the right size and grind the end to make it perfectly square, it’d be a snap.

I’m in the process of changing mine but I did not bother to take the original bushings out…
En plus, the two lower bushings have a big fat washer embedded on one side. Jaguar sport ?

I’ve modified the poly bushings to snugly fill the empty space. I will squeeze in a couple of washers also.
I think this will work just as good.

Good news is that you can do this gob without disconnecting the hoses or ball-joints. 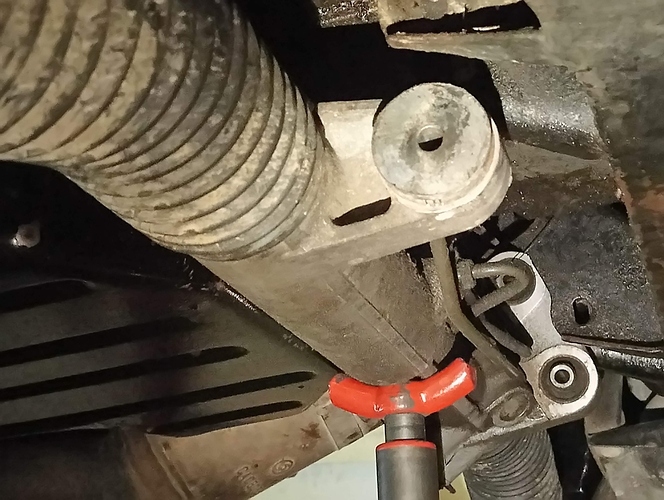 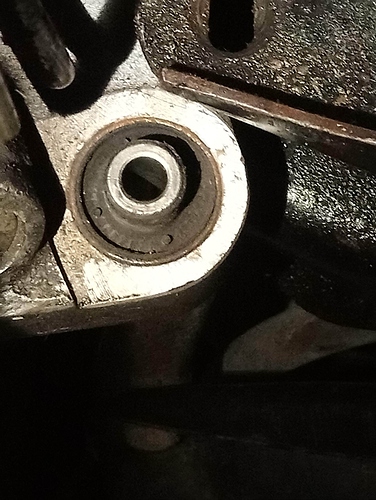 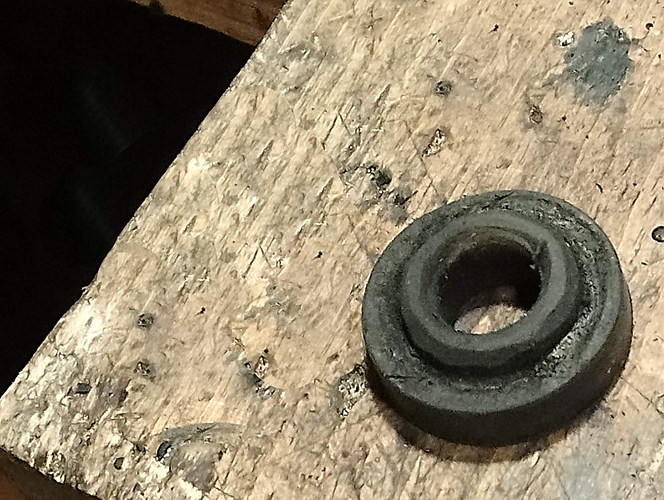 I think the major advantage the poly bushes have over the stock items is the reduction in sideways play. If you already have top hat style bushes in there (maybe CBC9107 from my XJR-S parts list) they should work just as well - although that part looks be be unnecessarily expensive compared to the poly bushes CAC1635K.

Yes, the lower bushes are indeed the CBC9107, don’t now how they found their way into my 1986 XJ…!
I am pretty sure that they are original, maybe Jaguar recognized the problem and started fitting the upgraded version in all cars ?
Nevertheless, there still was some lateral movement…

The upside of the CBC9107 is that they last forever. No squeaks, no breakdown over time, they are forever parts.

Yes, mine are in perfect condition, 33 years later…
I am ading the poly boush and a washer at the empty side.
On the upper bushing (normal) I am doing the same on both sides, plus washers.
Will post some photos when it’s done

I just changed out my rack to a S3 and the upper column and the hoses. It is easier if you hook up the high pressure hose before lifting the rack back into place…just loosely tighten the hose fitting.

I am ading the poly boush and a washer at the empty side.
On the upper bushing (normal) I am doing the same on both sides, plus washers. 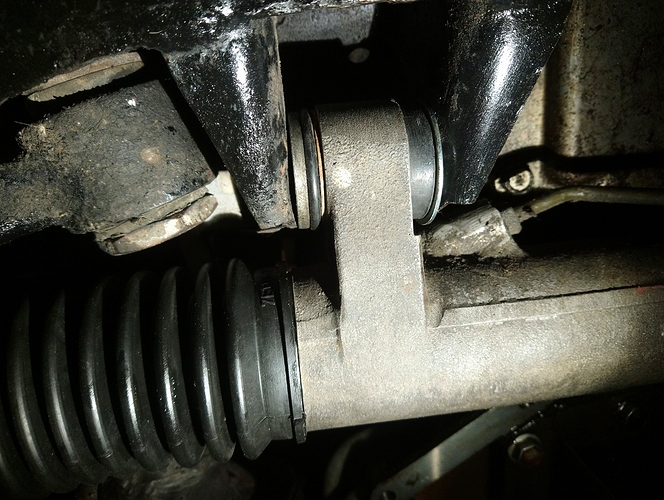 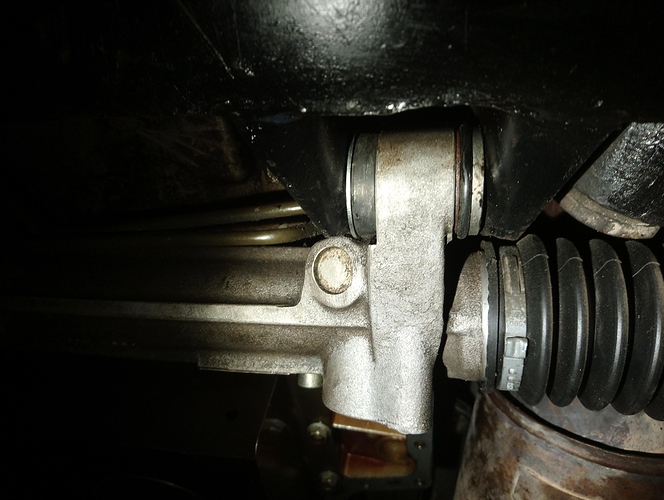 Beautiful. That rack ain’t goin’ nowhere. Please tell us how it drives.

I will, but still working on the car, changing oil pan gasket and sealing the sandwich plate screws.

Beautiful. That rack ain’t goin’ nowhere. Please tell us how it drives.

Drove the car today.
Steering is more responsive with no noticeable difference in harshness. (Haven’t tested it yet on a dirt road)
The biggest difference is how the steering wheel now willingly returns to dead straight and stays there.
At the same time though I adjusted the Camber on both wheels that was all over the place and put some new grease in the rack, so it might be an accumulative effect.

Thought I’d throw this out there…when the expert V12 Jaguar mechanic took a look at my car, he said the P/S hoses were not leaking that bad, just a minor seepage. I told him I’d like to replace them anyways since they were probably original.

He looked at me with a smirk, and said ‘i’m sure those aren’t original’.

So I guess these things need replacing every once in a while?

He admitted they are a PITA, a four hour job for him. The now-only available aftermarket hoses don’t always match up perfectly. And advised to make SURE to unbolt P/S oil cooler first before dropping steering rack.

Just catching up to this thread and I want to ask for some advice. I had a gushing PS leak that prevented driving the car. Since I wanted to install poly bushings anyway, I decided to drop the rack to see where the leak was. As I pulled the rack down, I found a hole worn through the high pressure hose about 3 inches up from the fitting. Seems it was rubbing on the exhaust manifold heat shield. I took pictures before loosening the hoses and once I got them out, I saw that they were each bent slightly at the rack end, along the 2 inch section of pipe between the flare nut and the hose crimp. I had new hoses made locally and the shop put the bend in the low pressure line but not the high pressure line. When I picked them up, I pointed this out and the tech said it looked like the line was originally straight. (he said I could bring it back or just bend it myself). So, for my S2 XJ12, should there be a bend in that high pressure pipe? Also, I suspect that, even though the hoses and rack and its bushings appear to be factory-original, the hoses may have been improperly installed at some point, so I don’t trust their clocking positions (the direction they were pointing) as I found them.

As I look at the pictures something else comes to mind: There are small angle brackets welded to the original pipes. These don’t seem to serve any purpose but I wonder if a piece is missing…maybe something that radially located or connected the pipes at the rack attachment…and was discarded in previous work?

When it rains, it pours! While working on my TH400 and exhaust, I’ve noticed I’ve got a badly leaking power steering hose! So next project, replace hoses. While I’m in there, may as well replace steering rack bushings with poly (as Kirby recommends profusely)

I am trying to figure out what parts I will need. High pressure hose, low pressure hose, poly bushings, and the special tool to make life easy. Anything else needed?

The hoses I am getting are AC/Delco. 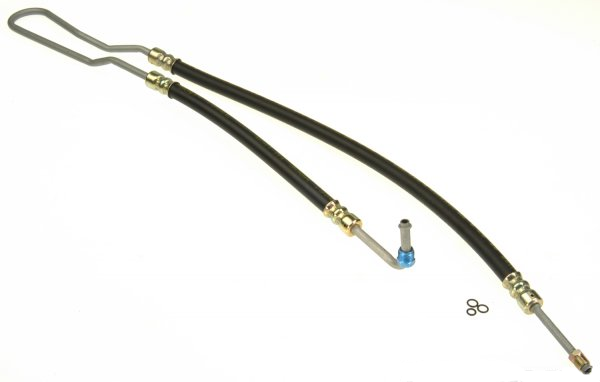 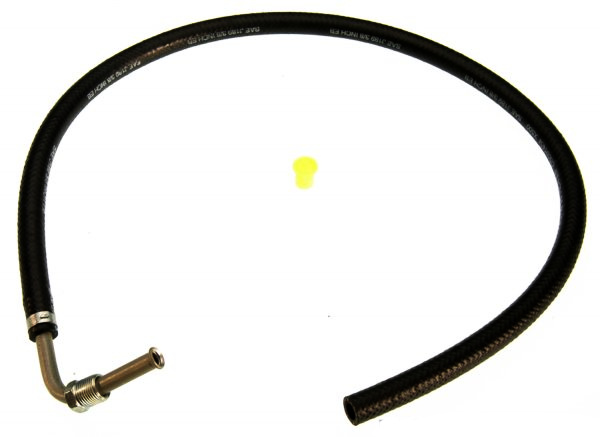 Curious, as one of mine is leaking badly too, Greg … is it the high pressure or the low pressure (or that short piece that runs from the cooler to the reservoir)?

btw, re: steering rack bushings, been wondering why when I get Superblue ('94 4.0) up to about 50 MPH the steering wheel is shaking back and forth slightly but rapidly. Same for when I apply the brakes (as well as a slight pulsation felt in the brake pedal). At first I thought maybe the front end had gotten out of align somehow, but there’s no funky wearing of the front tires and she holds the road almost perfectly with hands off the wheel. From what you mentioned, Greg, I’m wondering if I’m dealing with bad steering rack bushings.

Can I reuse the heat wrap? I see no part #'s. Or can I buy normal heat wrap material?

Was wondering about this. The factory manual seems to indicate that the “heat sleeves” should slide right off the old hoses and onto the replacement ones. Hope that’s really the case!