I’m working through a bodge job of wiring under the dash of my S2. Would someone please tell me what supplies the power to this fuse? In looking at the wiring diagram and it appears to come from the alternator relay but that can’t b the case as surely that would be unregulated a/c power? Speaking of the alternator relay, where is it on the car?

It comes from tang 2 on the ignition switch via a white wire.

As Terry has said, the supply to Fuse#6 comes from tang 2 of the ignition switch. Jaguar used the fuse block as a multi-purpose device - not just to house the individual fuses, but also as the central junction box for all electrical circuits in the car. So, the supply side of fuse #6 is connected to all circuits that require switched (by the ignition switch) power. All these circuits use a White wire. All the load circuits behind fuse #6 use a Green wire.

Speaking of the alternator relay, where is it on the car?

There are 2 or 3 relays mounted to the mud shield, behind the battery. They are for the horns, alternator & air conditioning (if so equipped).

The alternator relay should be the second from the top. Originally it was the one they chose to label though the label may be long gone (but you may be able to see a ‘shadow’ from it in the tarnished surface of the relay): 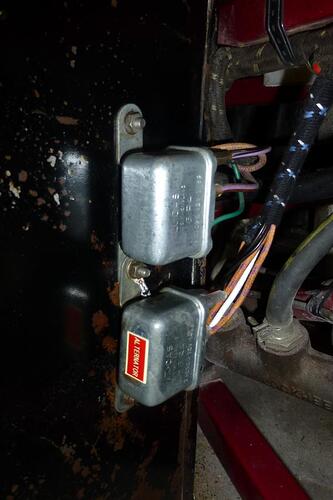 All these circuits use a White wire. All the load circuits behind fuse #6 use a Green wire.

Not entirely sure of its accuracy, but I grabbed this…somewhere! 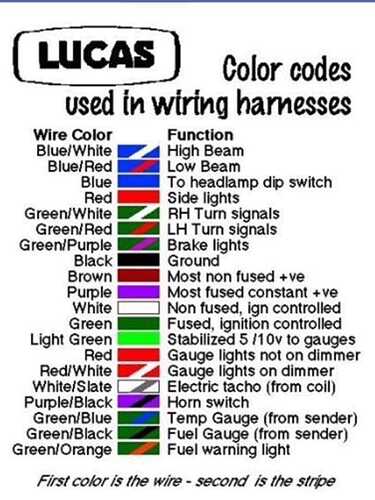 Early in my ownership I took a copy of the wiring diagram and highlighted all the parts of the chart that were not protected by a fuse. Basically the ‘white wire’ and ‘brown wire’ circuits.

It was such an alarming exercise that I added a pair of fusible links - one each for the browns and the whites.

Haven’t melted one yet but good to know that something other than wiring loom itself is protecting the car.

This is the correct identification of the relays on the splash shield: 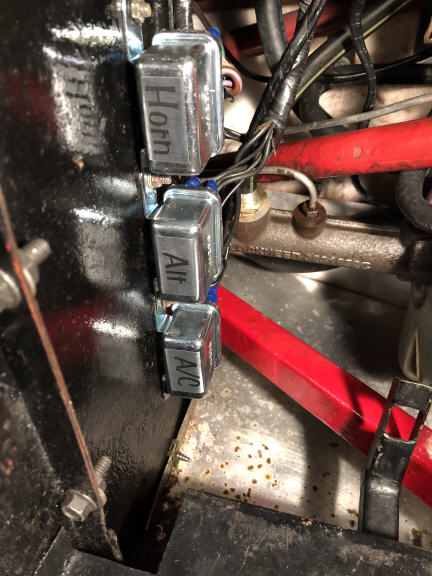 The fan relay is on the right side picture frame on an S2. All that said, the alternator relay has absolutely nothing to do with your problem.

Thanks very much for the picture. I asked about the location of the alternator relay only as a “forewarned is forearmed” piece of information. Saves guessing in the future, if I should be so unfortunate as to need to know!

Thanks to everyone who replied so promptly. I now have a origination point to start untangling the bodge job that was clearly done to side step properly fixing a problem I’m trying to locate.

One more question: what feeds power to fuse 7?

Fuse 6 and 7 are ignition controlled sources, so one of the white wires connected to the fuse 6 block loops over to connect to the white wire block side of fuse 7.

It would have been nice if there were a fusible link between the switch and fuse 6. It would seem to be a valuable safety aid.

In answering my question about the power to fuse 7 you’ve also, without having any way of knowing, answered the question about what prompted the bodge job I’m trying to clean up. I think a previous owner was attempting to add fuses into the circuit but kind of messed it up. Sooo…thanks very much for your answer and an inadvertent but very valuable hint!