re my tool tray lid hinges.

Thanks to all those listers who offered advice. It was very much
appreciated.
I have now sourced new ones and replaced them.
I also checked the retaining catches and found that the ‘S’ shaped
spring-steel strips which hold the latch closed have broken.
Can anyone help me with a source for these? I know a firm that could make
them but perhaps there are some readily available out there.
Many thanks again

This is an old listing I found by searching and I don’t know if there is another discussion thread for these latches. These single leaf springs are all broken on mine. They are made from a heavy (relatively) gauge for the short arm lengths and angle of rotation, which is a formula for excessive stressing and early fatigue.

What I have done so far is to make my own from two sources.

I am conscious of the risk of having too weak a spring as it might not prevent the latch from creeping open in transit, subsequently dumping all the tools into the boot, with the ensuing surface damage. I would like to have an original spring to use for determining the pull force needed to open the latch, as I can then fiddle with home-made alternatives. I’ll keep experimenting as I need to finish them now that I have been fortunate to have the latches re-chromed to a very high standard.

Springs are usually made of a high tensile strength steel. Clock springs and dipsticks are good sources.
Relative to springs, I made a discovery while removing a stuck rocker arm from a Mark V head. I used a propane torch to loosen the rocker arm, and in doing so found the adjacent spring on the rocker shaft had relaxed.
I made use of this discovery in fixing the coils on my overstretched throttle spring. I compressed the coils with a bolt and nut, then heated it up with a propane torch, and let it cool. It relaxed in the new compression.
I wonder if you couldn’t do something similar to make these latch springs. Put a couple of bolts in a bench vise, parallel and close together.
Start with a steel strip longer than you need.
Hold your strip of steel between the bolts.
Bend the steel around them a little, then heat it up and let it cool.
Or maybe heat it first and bend it second, then cool.
In three or four steps you would have the spring in the shape you want. 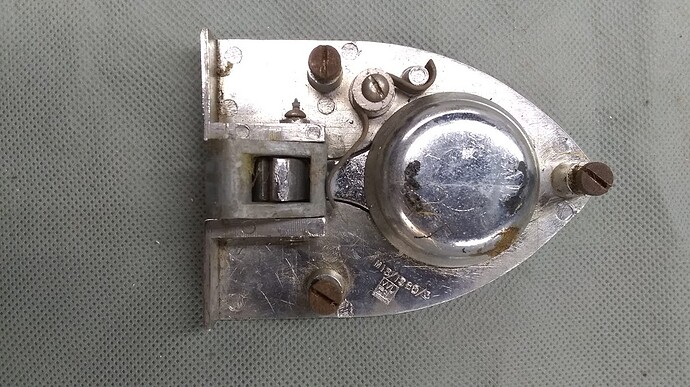 Thanks Rob. I imagine in a mass production environment this spring would have been punched into shape in one short sharp hit cold. With the tight radii involved, this would have probably created a prestressed condition as a precursor to eventual fatigue failure.