The gearbox mounting and centre propshaft support have been renewed as the mounting rubber had failed so I replaced everything including the gearbox support spring and rear engine support bush etc. Now I have a horrible vibration suggesting the propshaft is out of kilter but having made the alignment jig and adjusted with shims the vibration will not clear up. Can anyone suggest a method to identify where the problem lies?

Could the rear engine support be too tight

Certainly could be as it was renewed. I gave the mechanic the relevant section of workshop manual but he has not convinced me the whole thing was set up correctly ie. loosen rear engine mount before you adjust the propshaft mountings. Maybe if I drop the engine mount a little and check for improvement? He has the lift so hard for me to do much at home.
Before I adjust anything I have compared my existing stabiliser with my donor spares car and mine is much lower than the spare car which did not have a problem? They are different years so not conclusive but interesting that one has over an inch of thread and the other only half inch 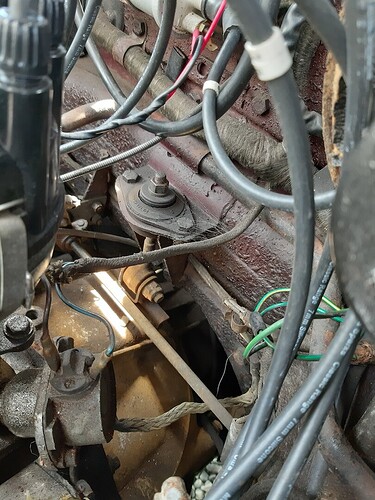 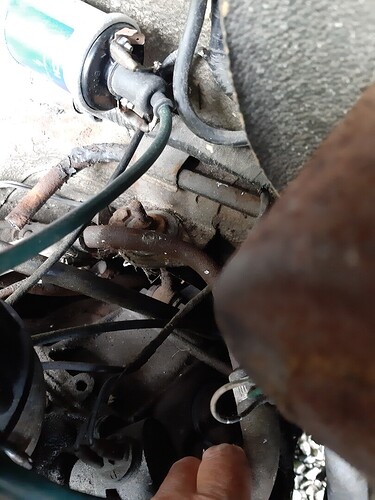 The correct procedure for the rear stabiliser is to merely wind up the lower part up to the bracket and then tighten the upper one to clamp tightly. You do not use it to hoist the engine \gearbox up, so the one with heaps of thread showing is probably wrong. Other possibility is the yokes of the propshaft are out of phase, if the shaft(s) were apart. Not sure about the Daimler, but Jags have a split propshaft, the two halves splined. If the two were separated, they may have been reassembled misaligned, causing out-of-balance.I think there are arrow stampings that should be aligned.

Thanks for the info. The propshaft is split the same but it was marked before disassembly so it has gone back in the same place. Using my jig the alignment is within millimeters correct so I am baffled what has changed. We tried to run it with loosened centre fixings hoping it would self centre but that didn’t work. If it needs to be millimeter perfect then I will have to keep trying to align it but surely if only slightly out of line it would not become un drivable would it?? To confirm the engine mounts were also renewed so if anything the engine is slightly higher than it was.

I agree with the previous message from Kevin
The centre mounting looks a little high which could produce the vibration.
I have seen this before when the metalastic bush was renewed, Try lowering it?
Regarding the props, if they have been apart there are alignment marks on the slider part which are 2 arrows that must be in the correct plane. All the yokes should also be checked to see if they are all on the same plane
You say that you have tried an alignment guage. This must touch the front prop in two points and the rear prop on one point. All three uprights should be the same length. Adjustment of the centre bearing can be shimmed
Hope this helps

Hi,
Not the answer to your question but something to consider is to convert the car to a one piece prop and do away with the central support - I found I was replacing the rubbers pretty frequently. Graham Whitehouse provided and installed the one on our car many years ago - He and his firm are still going - Dudley, West Midlands. My recollection was the cost was modest (£100 or so). My recollection from Graham was the two piece had something to do with materials of the day requiring the prop to have a wide diameter, but now a slimmer prop can be made strong enough for the job.

Not the answer to your question but something to consider

I had a Sunbeam Rapier with a BW35 'box back in the 1970s and it had a split propshaft. Although it was not too bad and quite tolerable, I could never get rid of the vibrations so maybe it’s an inherently bad design and a new single prop would solve the problem.

I would be interested if you go this way, or if anyone else has, because my prop needs work - not much, but good to know if there is a viable alternative.

Perhaps you could remove the rear stabiliser nut and top washer, wind down the lower washer ( they are stepped to fit tightly into the rear bracket) and see if it has been adjusted correctly. The gearbox is supposed to be supported by the rear spring with the stabiliser damping the up and down bouncing. The stabiliser connection points are metalastic to give bit of compliance and insulation from vibration, not to support the engine or gearbox. Maladjustment will result in premature failure. Another (remote) possibility is that the propshaft flange is not properly seated on the diff. They have tightly mating annular faces and if not cleaned and or located properly will cause the propshaft to rotate at a funny angle.

Actually the workshop manual shows it being done the other way with a 40" bar and second upright 12" from the end. The 2 uprights are on the long shaft ie. the rear section and 1 upright on the front short section.

I could never get rid of the vibrations so maybe it’s an inherently bad design and a new single prop would solve the problem.

In the mid 70s when Jaguar was selling the Series II coupes we had an issue with judder on take off from rest. This was a two piece propshaft and efforts by dealers to align the shafts and center bearing were often unsuccessful in eliminating this issue. The work around (perhaps non official) was to have a single piece shaft made up which solved the issue.

Yes, judder on heavy throttle from rest was quite bad with the Rapier.
I think I’ll put up with the Daimler’s vibrations as they aren’t bad then do something when I change the diff, which will happen ‘when I get round to it’

I have been in touch with GW Autos as already involved getting gearbox gasket but cannot get the correct ATF here. They will get back to me about the single propshaft.

Robert Hughes: Once, decades ago, when I removed the cradle under the gearbox/overdrive on my 3.8S (single piece propshaft car) I failed to put the washer shims back between the cradle and floor. The result was a vibration on the overrun around 55-60 MPH. Thought it was a propshaft out of balance but after replacing the washer shims (four bolts with shims) the vibration went away. Surprised that so little an adjustment would have such an effect. If your set up is similar you might do some experimentation.

Yes we put washers(shims) under the mounting plate. My assumption was that the new rubber bracket would in effect raise the prop shaft by a millimeter or so from the failed one but it did not cure it having them in or out.
If I cannot get a single shaft I will use a laser and magnets with markers to get it dead straight.

Yes that is their details

Yes - not much to learn from the website - give them a call.