Gentlemen,
As my ‘Extra hole in the block’ post outlined, I am doing some maintenance on my 1948 Mk IV and originally planned to refurbish a spare head and swap it for the original, along with a radiator clean out and a refurbished water pump.

I purchased the car as the third owner in January 2003 when it had done 45000 miles, and mechanically it is in pretty much original condition, but it had been to Repco for some engine work (judging by the paint job) at some time, but no details or receipts unfortunately.

A tune-up on a dynamometer a few months back revealed a burnt valve, so with the enforced Covid-19 restraints I took the opportunity to replace the water pump, clean the radiator and swap the head for a refurbished one.

Today saw the head ready for removal, with rocker-cover off and rocker shaft off, but I could not release any of the push-rods… except one. The rest were held tight and by what felt like a spring. I had closely examined the illustrations in the workshop manual for the Mk IV and noticed a small spring surrounding the base of the pushrods but had been advised previously that these had been discontinued on the later versions in the Mk IV production.
However, there was no way the remaining eleven rods would lift out, so we lifted the head clear over them.

With the head off, still no clues, and my friend reported that on all the engines he had seen the push rods simply lifted out of the block. Definitely not in my case, so I removed the tappet cover plate. Those of you who have done this job with the engine in situ will know that it is almost impossible to see in there unless you have the dexterity of a ballet dancer or gymnast. So out came a bright light and a mirror, and to our surprise, there were springs on each of the pushrods.

A quick read of the Workshop manual reveals that indeed I do have to fabricate the appropriate tool to lift the pushrods against their springs so that the ‘Tappet Blocks’ can be withdrawn, and although it does not mention this, presumably then I can release the pushrods, the spring tension comes off and the collars can be removed and the pushrods pulled up through the head. It also mentions ‘cups’, but I have yet to find any reference to them in the illustrations. Apparently, I will also have to withdraw the rev-counter drive shaft to release the centre tappet block.

With my aging facet joints, my back is not going to stand for any time attempting to do this with the engine in position so getting the pushrods out will mean an engine-out job. While I am a little disappointed at the outcome, it will mean that I will be able to deal with the other issues that I was putting off, namely a badly leaking gearbox, a check of the clutch and an inspection of the bearings!

I also want to look closely as to why one pushrod is free – I presume the collar has failed. The car ran fine up to the dismantle.

I have attached some pics of the bowels of the valve gear for those of you who have not come across these springs.

I would be interested in any readers experience or knowledge of the pushrod springs, whether they were supposedly only on earlier models, and anyone with experience of their removal. I am aware of the note by Barrie Price in ‘Rise of Jaguar’, but I can assure readers that the engine number is correct and assume the Heritage trust got the build details and date correct, so it seems I have a later engine but with what was later seen as superfluous push-rod springs. I cant imagine any mechanic reinstalling them but … who knows? 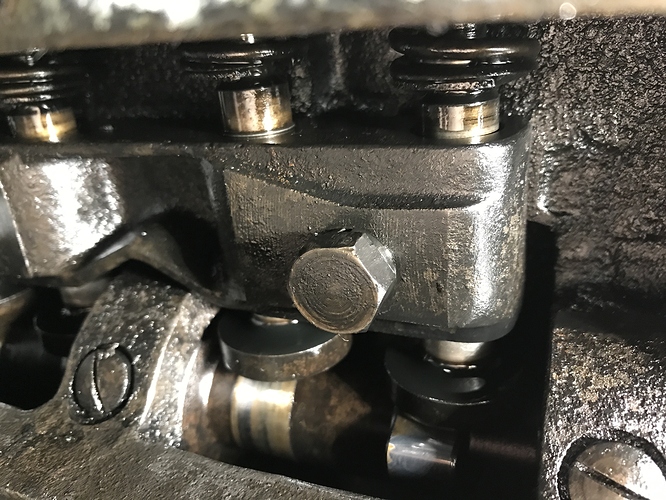 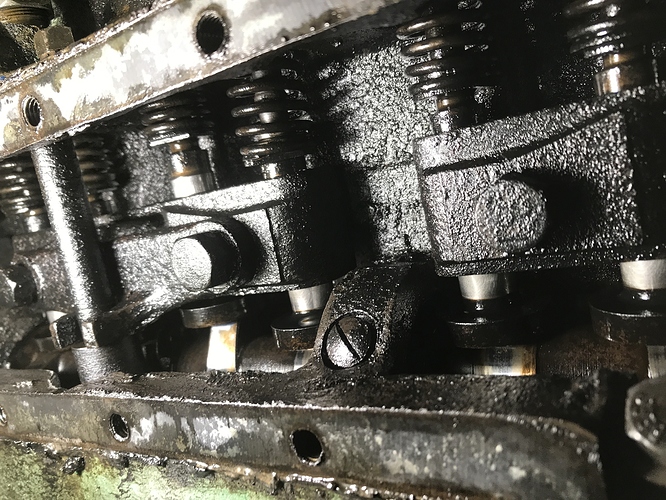 Hi Darryl, “S” engines are found with the springs as you have discovered. The springs were eliminated in later engines, such as “Z” series. Perhaps you may decide to just leave all the pushrods in place if there is no evidence they need removal or refurbishing.

You might like to try to figure out why a valve was burned. One element to sleuth out is the length of the pushrods. Without removing the springs one may measure, with some inaccuracy, the range of motion of the pushrods in comparison to each other during cam rotation. Are all pushrods of the same length and range of action, including the one which was not held in by spring? Is the burned valve associated with the springless pushrod?

Hi Darryl,
Be careful, as this sounds like the start of Shipwrights disease… Next will be " Whilst the engine is out I decided to freshen up the engine bay and I found…"

Hi Jon
Funny you should suggest that - I am still looking into replacing the collet under the pushrod spring (hopefully without removing the motor) but decided to clean up my water rail with some steel wool prior to polishing.
It now has two extra holes - and was more corroded than I thought! A new one now in sight!
SIGH

… whichs ends with, “When i worked my back to the rear bumper, 22 years later…”

Hi Roger
I have finally removed the valves from the head and find that the problem is not a burnt valve but a significant build-up of carbon in the rear cylinder such that the exhaust valve is badly coked. It is so bad that is is unlikely that it was closing properly. The valve guides in the head were badly worn with noticeable play between the valve and stem - unlike that in the reconditioned head I will be reinstalling (along with valve stem seals).

The pushrod that was free had in fact come free of the collet as it (the collet) was lying in the surge tray in the sump. It is noticeably of a larger internal diameter - possibly a faulty collet initially as it looks different.

There was no noticeable difference in the pushrod length/movement.

Thanks for your feedback, it was much appreciated. 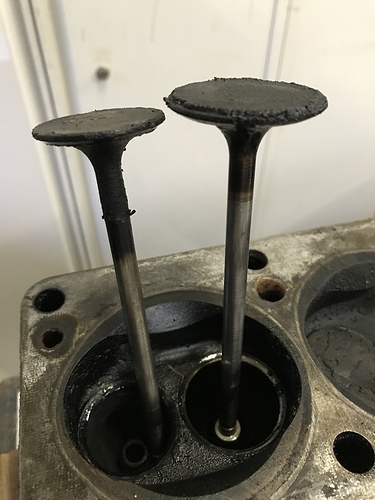 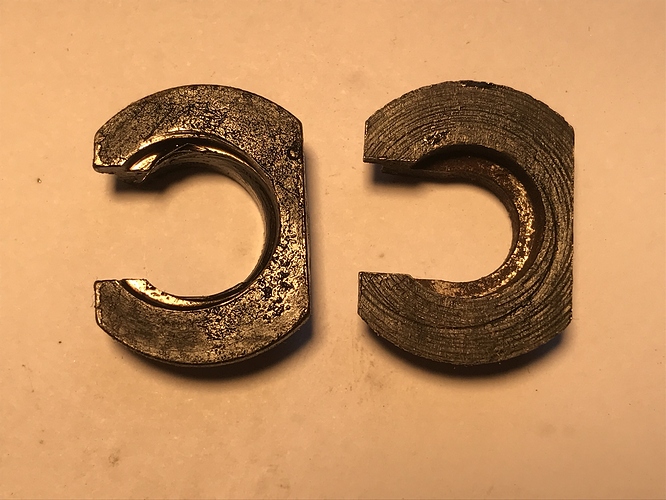 Very interesting. I like to study failures like this to try to understand the initial or root cause. My thought on seeing this collet is that it was either installed crooked or popped up crooked during some prolonged resonant oscillation in the spring, and then got beaten into the oversize shape you see, until it fell out.

Glad to hear of your progress and to see the photos.

Could you post photos and parts information for the valve stem seals you are planning to install? I would love to learn those details.

Rob - here are some more photos of the offending collet. It seems that some of the initial dimensions of this item may have been different. I have measured the diameter of the opening and note at least 1 mm wider in the inner formed shape above and below, although the outer diameters are the same. It seems unlikely that this was a case of wear, however the edge of the collet which bears on the pushrod collar seems to be worn. Either way, it will not come easily over the pushrod collar although with engine force perhaps - a mystery to me as to what happened! 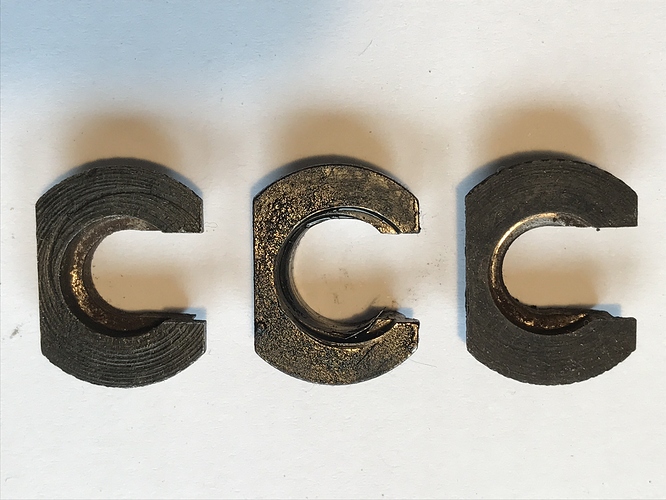 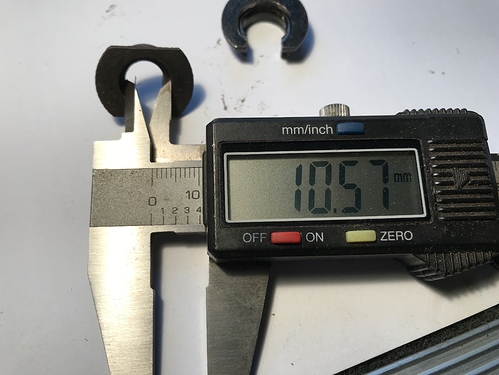 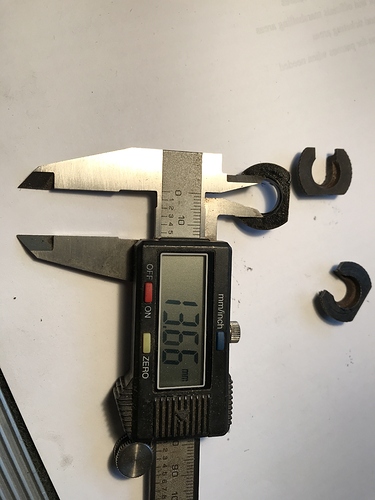 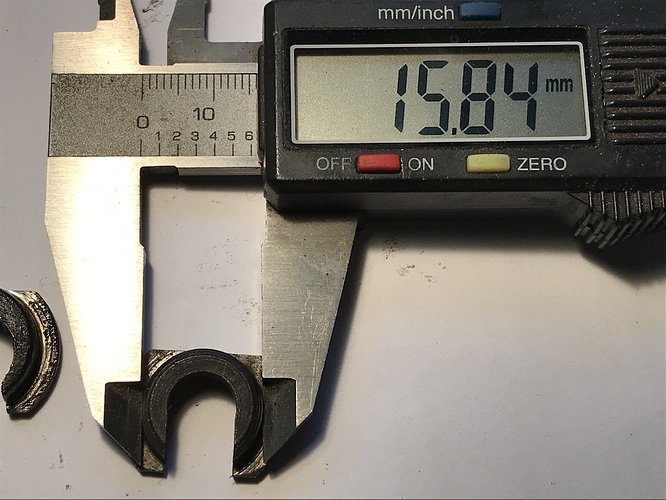 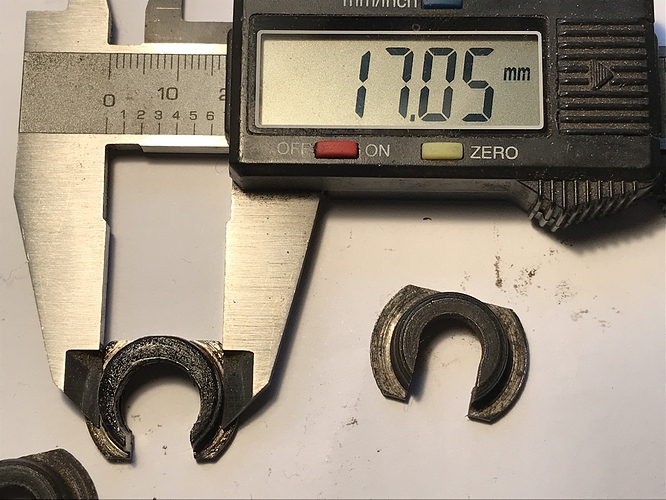 John - because the collet was missing the pushrod spring was not under serious compression but simply sat above the cam follower (Tappet?) and below the recess in the block. I would post a photo of the valve spring compressor but it was only a large screwdriver and not very interesting. Once I lifted the pushrod out of the block, it was a simple matter to insert the large screwdriver and give it a lift and lever it out past the cam follower (set at its low point on the cam) and yank it out. Getting it back in (yes it was in unmarked condition and the same as the others in my spares box) was simply a matter of tying up both sides with wire while it was compressed in a vice and using the twisted wires as a handle to work it back into place. Because it was compressed it was a relatively simple matter (albeit by feel) to drop the pushrod down, slip the collet into place with some forceps, then snip the binding wires with some side cutters and pull out the two pieces of wire. I had the sump off in case I dropped any bits in the process. It was helpful to use my mobile phone as a ‘streaming device’ so I could see what was happening by looking at the screen. However another pair of hands would have been helpful but I managed it solo. 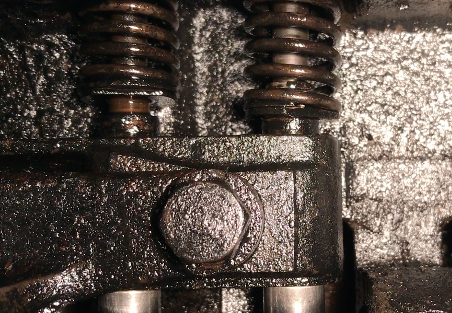 Pushrod spring minus collet as found. 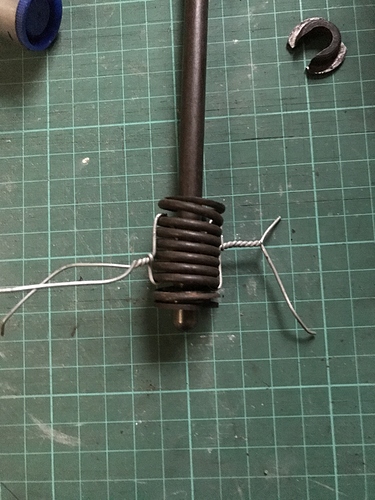 IMG_55743024×4032 2.34 MB
Pushrod spring bound for replacement - note that I had to redo this with ALL of the coils included to bring the spring down to the minimum size for easier insertion. The twisted wires make for useful handles for jiggling it into place. 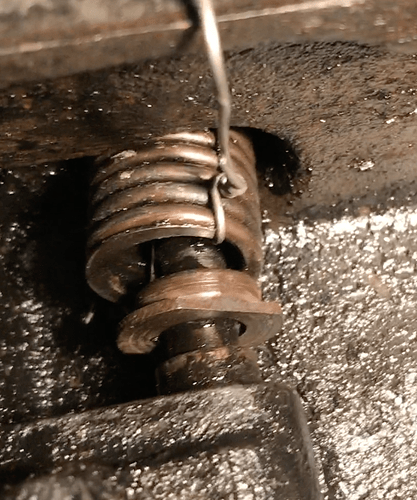 Roger
I am reliably informed that others have used valve stem seals from Datsun 240Z so have ordered a set and hope to see them Friday Aust time so photos will come along in due course. The car always left a puff of smoke at take off after idling at the traffic lights which I was told is a sign of worn valve guides and sure enough I seem to have plenty of evidence in No 1 (Jaguar nomenclature) cylinder. That cylinder was very gooey!
While I doubt I will wear out another set of valve stems/guides in my lifetime, I figured I would add them for the next owner. 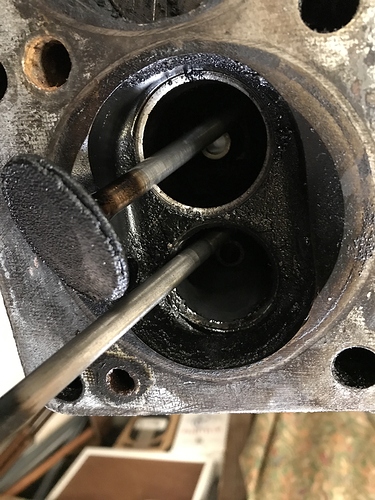 Hi Roger,
Herewith pics/details of the Valve Stem Seals as requested. As I mentioned earlier I was told they are the same as Datsun 240Z.
Cheers
Darryl 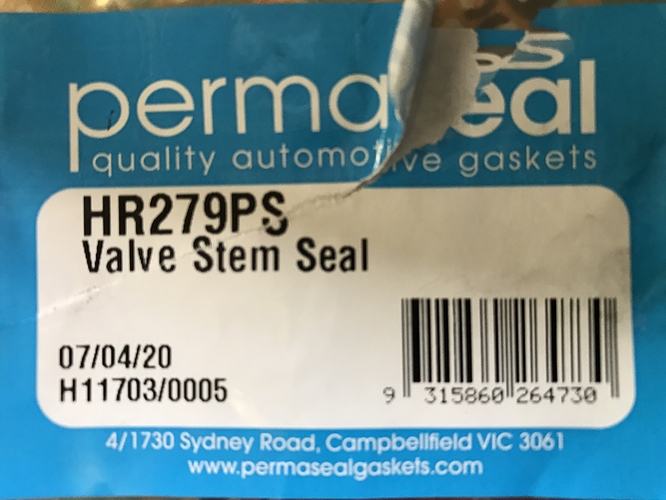 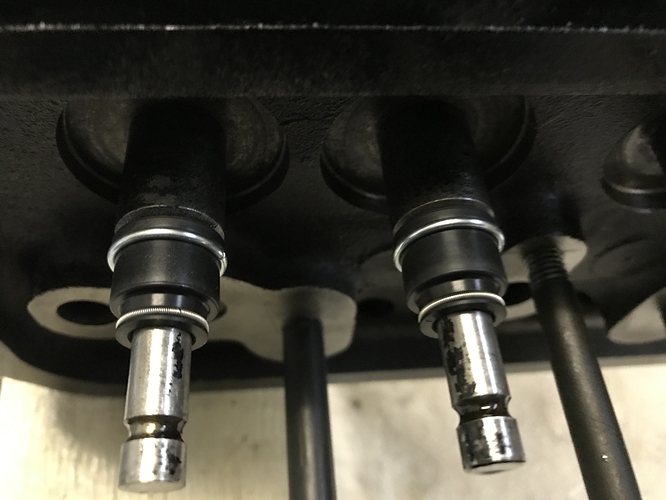 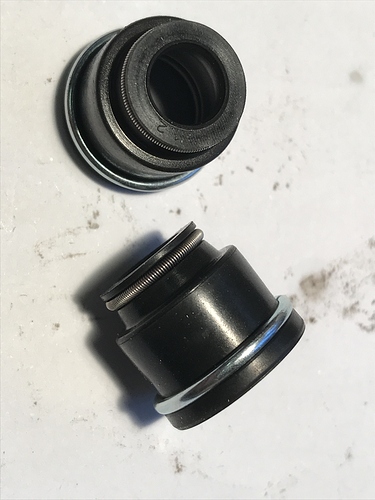 Thanks Darryl, I may add seals also. It would be great to hear further steps and results for them as you proceed. Cheers.

Hello, I own a 1.5L car. It is suffering from all 8 push rod retainers or “collets” being worn out. I am able to remove all push rods without releasing them from the collets. I wanted to ask @Darryl_Grey where you got your collets from? I am unable to find them on line. I have written to one of my parts suppliers but no reply so far. A point to note is that the 1.5L “collets” are different from 3.5L, however the 2.5L and 1.5L may share the same part.

Any help will be appreciated.

According to my parts lists all three engine sizes use the same C.430 collet.
Vorlaufer lists them. Engine head Components :

If you are looking for valve springs then Alan Gibbins probably stocks them.
Spares Secretary 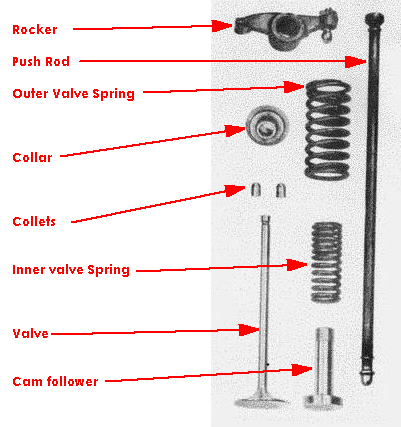 What about Triumph TR2, are they the same, being a Standard engine?

I Don’t recall a TR2 Engines having pushrod retainers…? 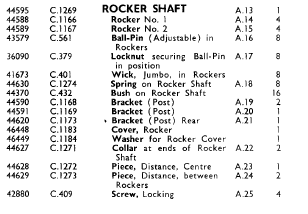 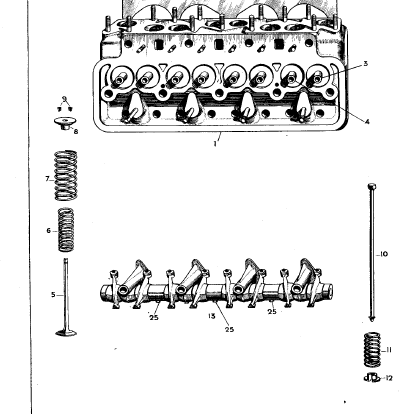 Are you referring to part 12 Collar?

Aha! That’s something they did away with on 3s and 4s.