Hi All,
After an opinion or 3, please. I have an early (no 542 ) S1 Sovereign that I bought cheaply and started doing up. It’s pretty tidy but the leather I thought was OK is too brittle for the upholsterer to work with and so more will need replacing than first thought. Price is starting to get up around 3K plus possibly another 1k or more to do the rear to match the new fronts. Do you think this car is worth spending that kind of money on? It’s pretty good both mechanically and bodywise, NZ new and numbers matching. Just don’t see enough of them to know what it is\ will be worth.Opinions please. Car would ultimately owe me about $6-7K and then just be a tidy car, certainly not show condition.

Kevin ultimately it has to be your decision but an early car like that really should be kept on the road.
All the best with whichever way you go.

Hi Kevin, I would love to see your car kept on the road. As far as I can see there doesn’t seem to be many XJs on the roads here and I have no idea how much my own series 2 is worth as I couldn’t find anything comparable to price check when I purchased it. It makes it very difficult to know what your car is worth and therefore if it’s worth spending the money, from a purely financial point of view Ultimately your decision but they are great cars!

Price is starting to get up around 3K plus possibly another 1k or more to do the rear to match the new fronts. Do you think this car is worth spending that kind of money on?

**
Difficult to see into the future, Kevin - but so far the odds of recovering your investment is slim at best.

As others say; do it for love - it as it’s own reward…

A difficult decision. My car is a 73 series 1, Some prefer early cars, I prefer late series cars as they have all the changes for the better. In getting my car back on the road I probably have spent $3000 (AU) and this includes new tyres. All work done myself. The car drives almost like new but my front seats are also in need of repair. I am prepared to spend $1500-$2000. If it works out any higher I will wait and try to buy a pair of seats already recovered on the used market. That in my opinion is your best option.

The best car I ever owned was a 1985 Honda Civic CRX. If I could buy a new one today, I’d jump at the chance. When we sold it – running perfectly – it had about 170K miles on it, but that’s not an issue because with the Japanese Take-Out program we could have reengined it in a weekend and be off on another 150K. It also had plastic body panels that cracked after a decade’s exposure to sunlight, but we had already replaced those cracked panels with new and had the car repainted a lovely pearlescent blue. No, the reason we eventually sold the car was the seats were coming slap apart. Had wires and springs sticking out. I had looked into options for reupholstering or replacing the seats in entirety, and either course of action exceeded the Blue Book value of the car! Still, in hindsight I kinda wish we had just spent that money and kept the car. I had presumed I could just go and buy a new car and be happy with it, but that CRX was exceptional.

Sometimes you spend the money just for the love of the car. I think that if I tried to sell my car today I would make a hefty loss on it after the purchase price plus what I’ve spent on it

you’re surprising me quite a bit if your terms “good both mechanically and bodywise”, “matching numbers”, “tidy car” are the same as mine. In this part of the world decent SI cars run at 12 - 18k EUR. If they’re just 6 -7k NZD I’d come over for vacation and take some with me … kidding

Honestly, leather work is about the most expensive you can buy and at the same time has a tendency to prejudice the market value of an otherwise authentic car. If I were in your shoes I’d start with a decent and affordable SIII interior and keep searching for a SI narrow pleats interior. If you can find one, it will cost you a fraction of those 3k and raise the value of the car instead of bringing it down. Even if you find a cream specimen you can easily dye it to your colour needs.

And, if you like the car, keep it - with brittle leather (btw, miracles have been seen with the repeated and liberal use of appropriate oils; I’m also working on my rear seat back upper edge …) or with a replacement interior. There will be other bills dropping in anyhow, so better not make up a balance.

Good luck with your decision

Jochen, when I was trying to price check before I purchased my car it appeared to me that ‘similar’ cars to mine were around twice the price in the UK as here. Impossible to be strictly accurate with this comparison but that’s what I think.
Also, I agree with you that most dry leather issues can be rescued with the correct treatment as long as you don’t have tears and rips.

A photo speaks a thousand words

I personally would be concerned at why the rear seats will look so out of place compared to fronts when he is done. Price sounds cheap for a proper job. I’d keep them and invest in some Leatherique products to soften and then recolour them, plenty of people have done this DIY. If it’s just stitching or isolated panels, you can do a lot cheaply. I had the drivers side seat base panel on my S type replaced then the whole lot recoloured, with a very tidy end result. Is your car a 1968/9 car, or is it NZ assembled #542?

Hi Guys,
Thanks for all the feedback, much appreciated. Took it all onboard and went to visit the upholsterer. He has enough leather to do both front seat backs, having already done the bases, but would have to use a bit of vinyl around the top where it is currently leather. Long story short, I have asked him to just do the driver’s seat back correctly and I will live with the mismatch on the passenger seat 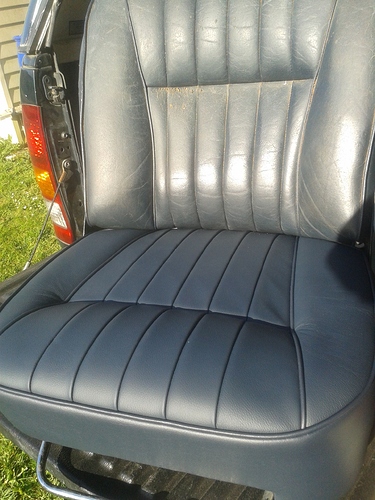 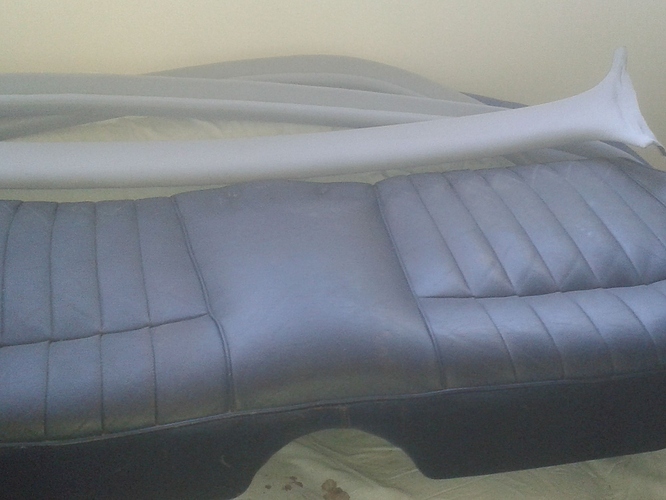 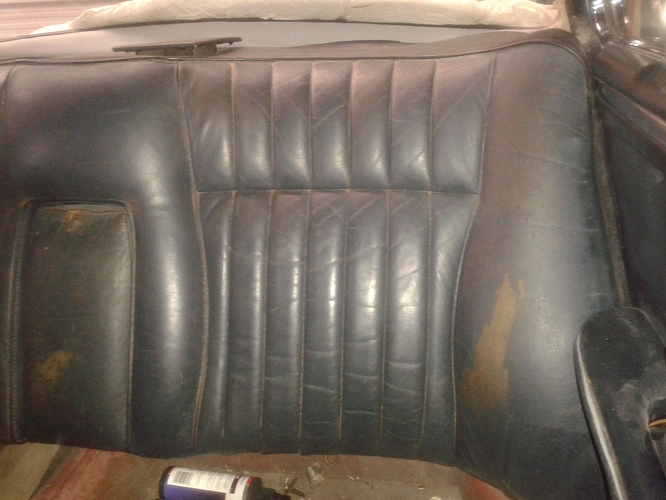 20200915_15525712560×1920 379 KB
This is the rear seat, again the leather is mostly good but the stitching is fragile and breaks easily. I have poured leather softener into it ( Gliptone and Connelleys) with little success. Upholsterer says I will have little success at trying to hand stitch it back together as a calico\foam backing is stitched to the leather as well.
These cars rarely come on the market here, and when they do they are usually pretty rumpty non-runners ( as this one was) so gauging value is difficult. Agree that they seem to be a lot more expensive in the UK. 20K GBP is about $40K NZ and you would scarcely get a quarter of that here. Dunners Dave, this is NZ new but UK assembled. I think NZ only started assembling late in S1 production ( 1972 73 ish). Quality was pretty poor by all accounts, even compared to British Leyland standards! This is the 2nd oldest listed on XJ6data.com. Has plated instrument surrounds, early rear reflector\reverse light setup, 1 piece rear bumper etc.
April 1970 as far as I can determine.
Just awaiting driver’s seat and car will hopefully be driveable and can take it for a WoF (MoT)
Thanks again All.
Robin_O_Connor (Robin O'Connor) September 15, 2020, 5:04am #12

Little bit of trivia for you Kevin, the first S1 XJ6 to come to Australasia now reside in Katikati.

Yes, I have met the owner and seen the car. I believe somewhere around number 225. Jaguar production was very much higher than Daimler so that car was probably made within the first couple of weeks of production, whereas mine was maybe somewhere about 6 months in to get to 542. 59000 S1 4.2 Jaguars made compared to 11,500 odd 4.2 Sovereigns.

I’d be having catburgers for dinner!

if the leather is brittle either the leather or the stitching will tear upon load. So don’t use the seats where the leather has the feel of dry cardboard. Maybe you remove the seats over summer, put them in your basement and treat them to a fair amount of oil/grease every five days. It is surprising what the reviving leather can absorb over time. It is worthwile investigating which greases are doing well with the leather and the yarn and don’t have a tendency to smell. Yet, even if decent products are by no means cheap it will be pocket money compared to the upholsterer’s bill and your pics suggest this is a wonderful candidate for rejuvenating. Just take grease and time. In the end you can refresh or even redye the leather. Small scratches can be sanded off or filled with a kind of leather filler.

As a comparator here’s an example from our side of the trench. Expect the colours are not to everyone’s taste - “very rare” - per the ad. Better cars seem to go for more but rarely priced above AUD$25,000. Coupes and MOD cars bring a premium. FWIW, Paul.

Here it is guys.

Thanks Paul,
That would probably be what I would expect that car to be advertised here too; whether it would sell is another matter. I’ve seen a good S3 Sovereign advertised for $5K, and a good S2 for $25. Go figure. By the same token unregistered , no WoF S1s have sold for around $5K, still needing work. My guess is my car , all finished and legally roadworthy would be worth about $10k to the right person, as it is low owners, largely original, unmolested and has original paperwork, manuals etc.
Jochen, thanks for the advice. The seat base has been sitting, covered in a warm room in my garage for 18 months now, getting regular treatments with little improvement. What product would you recommend? I usually use Connelley Hide Food, but I think that’s better at maintaining and protecting than bringing back from the dead. Tried the Gliptone as it is more liquid but only a slightly better outcome. I probably need a leather restorer. Someone suggested Leatherique, but the NZ distributor is out of stock and unable to provide an ETA of new stock. Googling Leatherique suggests there is something odd going on somewhere.
I bought this car cheaply because the interior looked good and I thought I would end up with a nice cheap car. Silly me! After 50 years of Jag ownership I should have known better. Past the point of no return now, though. Thanks All.

I think the secret to softening of leather is to sand it, then use the product of choice.

I also think it’s the best approach.
The bare leather will absorb the softener much faster.
Then you can re-dye them and you will have brand new seats.
I have never done it but it’s not rocket science and I’ve seen many that did it with very good results.