I’m looking at purchasing a replacement radiator for my '64 MK2 project.
Aluminum ones are abundant on eBay at attractive prices.
Some are provided with an electric fan and cowl, some are not.
Pretty well all come from China.
My question is: are later MK2s equipped with electric radiator fans, such as E-Types, or do MK2 owners discard the mechanical fan in favour of electric?
If so, some Otter switch arrangement needs to be installed to control the fan.
I’m not sure that’s the way to go for me since I’m keeping the generator (instead of switching to an alternator) and the fan would be an additional draw on its already marginal output.
Thoughts and experience?
Thanks.
John G. 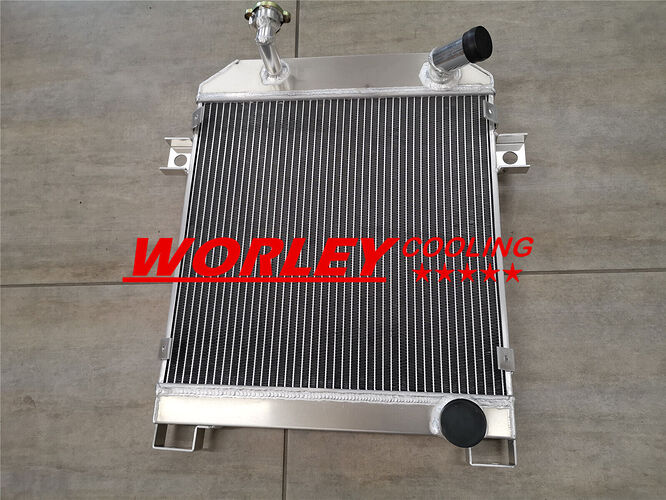 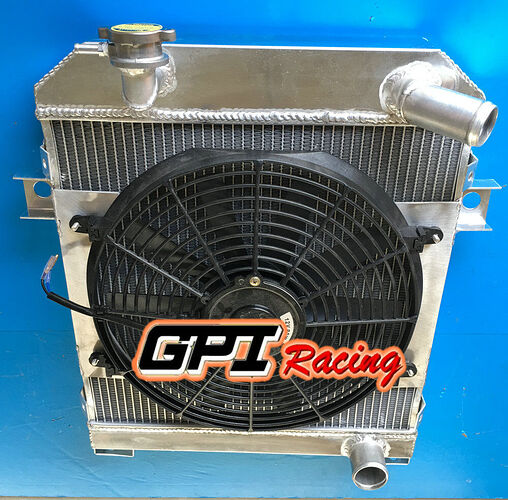 I had a $700 aluminum radiator kiss the fan blades. It netted my $18 at the recycle yard. I went back to my factory radiator after a professional “rod and clean” procedure. I removed the mechanical fan much to the dismay of my local guru who noted my cable tied electric fan (Derale) fan to the front of the radiator would never last - 15 years ago! If I found an electric fan AL model with all the brackets, I would go with that. They will supply relays which MUST be used. I wired up an extra switch to activate the fan before the temperature gauge got above the mark of no return.

I have a small nipple like an otter switch on a wired circuit and activates the fan. This is slipped into the top radiator hose. Frequently on shut down I will hear the fan going on and off . A good battery is imperative averting the dreaded heat soak; use that in heavy traffic and also rev the engine up and down, which the ladies love! That alternator conversion will certainly help in the future.

John, If you prefer a US made option, check Ron Davis custom radiators. Beautiful workmanship, but not in the price range of the imports.

My 25 original amp generator has been running an electric fan for all of its existence - in my '62 e type. I changed the fan to a CoolCat about six years back - all good. I would install the rad and fan and see if the fan presents any issues with charging.

I would encourage you to fit a modern electric thermo fan. Then you can remove the dangerous steel one and get better cooling. My MK2 has one fitted in front of the stock radiator.

I think it is a matter of personal preference. We ordered an aluminum radiator from Wizard Cooling for a Triumph TR 6. It was very well made and as they fabricate them per order, they installed a bong for an electric thermal switch. While it was a beautiful piece of kit, I just couldn’t bring myself to install an aluminum radiator in the MK2. It just didn’t look right.

Had the original radiator re-corded (about $400 3 years ago) and they installed a bong for an electric thermal switch. I realized the electric fan installed on the TR 6 was about the same diameter as the metal fan on the MK2. Removed the fan from the electric motor and found that the center was a similar diameter to the metal MK2 fan. Drilled a few holes and trimmed the blades and fitted it to the MK2 water pump. Weighs about ¼ of the original fan and fits inside the shroud.

Installed a smaller pusher fan in the front of the radiator which is hooked up to the thermal switch.

I’m not a fan of originality (bad pun?) but I do like the aesthetics of the original radiator

I forgot where I got my aluminum radiator since it’s been 10+ years and only recently started a minor leak. I have a SPAL fan on the front of it and no engine fan never had a problem with overheating.

It is not necessary to fit an Otter switch to control an electric fan. I have had my Hayden electric fan controlled by a switch and relay for decades. Summit Racing sells this wiring and switch device which I have successfully used Hayden Electric Fan Controls 3647 Mine is wired to cycle on and off after engine shut down to ventilate engine bay. Have never had a battery issue with such as set up. I left the engine driven fan in place and fitted the electric one in front of the radiator.

NAR in the UK produce very good quality aluminum radiators with original shape tanks. They are the supplier to SNG Barratt, but it’s cheaper direct from them. I think they ship worldwide.

When I bought my 1967 Mark 2 in 1989, it came without a cowl. In 1998 an unfortunate occurrence transpired in which someone pulled out of a driveway and hit my right front fender , the shock of which caused the fan to pierce the radiator. Since the other errant driver had valid insurance and I had a comprehensive classic car insurance policy, I had the car towed to a well known at the time jaguar restoration facility. In addition to replacing the fender as well as straightening and rechroming the front bumper as well as replacing the water pump and its bladed fan, they also had my radiator recored with what they described as a’recirculating core’ unit which has more coolant flow tubes as well as more efficient cooling fins. My car still runs till this day with that radiator and no cowl, and I’ve never had overheating problems with it, even when stuck in slow moving traffic on very warm days…

Well it seems like the consensus is for the electric fan.
That’s the way I will go.
Thanks all for your input.
What a great support group!
John G.

Just to give counterpoint, I’ve been running my Mk2 with a quality re-cored stock radiator and a 15$ flex fan, in place of the stock metal fan, stock shroud for 10+ years. Never a problem with cooling.

Well it seems like the consensus is for the electric fan.

I think that’s right . I have a high quality N.A.R aluminium radiator in my MK2 , with the standard fan , and it overheated in traffic on a hot day .