Radius arms. which side is up - IRS First Time Rebuild

My latest endeavor rebuilding the IRS I picked up a couple of months ago. I got the big bushing out and pressed in the new one, only to discover I may have pressed it in upside down.

yes, there is a metal lip within the radius arm ends to prevent the bush being removed or installed the wrong way.

I use the correct Churchill tool and a 12ton press to do them.

Check the FSM, pretty sure it mentions this

I cannot remember for sure if the lip is top or bottom, but there is a logical reason for its location

yes, there is a metal lip within the radius arm ends to prevent the bush being removed or installed the wrong way 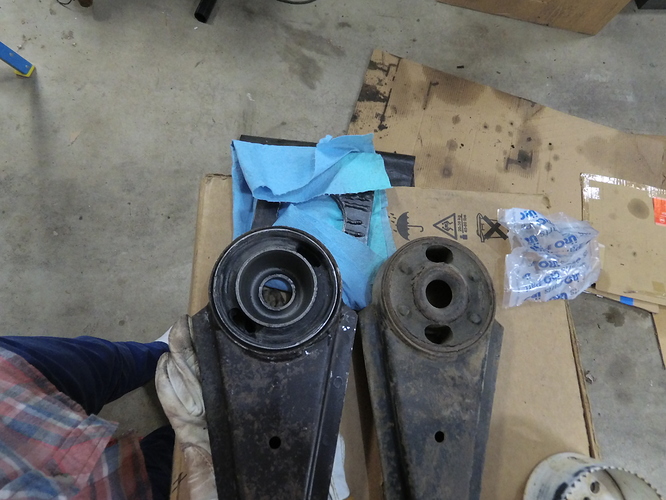 So is the bushing installed upside down?

the lip is quite small, and it may be possible to push the bush out, flattening it

I cant tell from the pics if they are correct

I think once the bushes are in like that, they are in, as they will be either correct, or the lip is flattened out, if they got pushed in the opposite way

I did check the shop manual. This is what is says.

Use the special tool that I don’t have, and press front bush from housing.

Use the tool I don’t have to press new bush into the front bush housing so that holes in bush rubewr are in line with center of radius arm. Press bush into radius arm.

Press the bush into the radius arm until the bush ring is flush with the housing. When pressing, have the small hole in bush core upwards.

The holes don’t line up. and I didn’t press the bush with the small hole upwards. A long list of obscenities are what I’m mumbling right now.

I can’t remember if the hole in the radius arm is on one side only…in which case it should be on the bottom to drain water… But from memory I pressed the bush into the arm from the underside with the retaining flange on the topside.
I think you should have the cut outs aligned with the length of the arm …because the cut outs reduce the stiffness in this direction and this is needed to allow the bush to “flex” in this direction. The suspension arm moves vertically and the radius arm pivots so something has to “flex”.
The “easy” way to do it is to get a bit of bar stock slightly larger than the outside diameter of the large bush retainer and machine a hollow in it which just fits the outside diameter of the bush retainer. This holds the arm safely in the exact position while you do the pressing. Then machine a further hollow a smidgem larger than the bush diameter and deep enough to contain the bush width. You can then press the bush out of the arm into the hollow in the bar stock . I tried several times to press with steel on the thin rim of the arm but pieces flew everywhere so I went with plan B.

Well, CRAP!!
The holes don’t line up. and I didn’t press the bush with the small hole upwards. A long list of obscenities are what I’m mumbling right now.

There isn’t a picture other than the radius arm being pinched at the big end between two mandrels.

When I re-read the refitting bit. Or actually read it and didn’t just skim over it, I noticed the bit about the holes in the rubber. The green bible states should be centerline. I’m debating on sacrificing this bush in order to get it right. The other came out in bits. From several failed attempts.

The hole lining up will make a difference on the torsional twisting of the radius arm. The way it is now, it’s going to put undue stress on both bushes. Do I care? Right this minute. NO. Will I later? Count on it.

Can’t you use the old bush. Just grind it down against a grinding wheel till it will fit in the top and press…

I did check the shop manual. This is what is says.

this pic is the reference (from MKX manual) 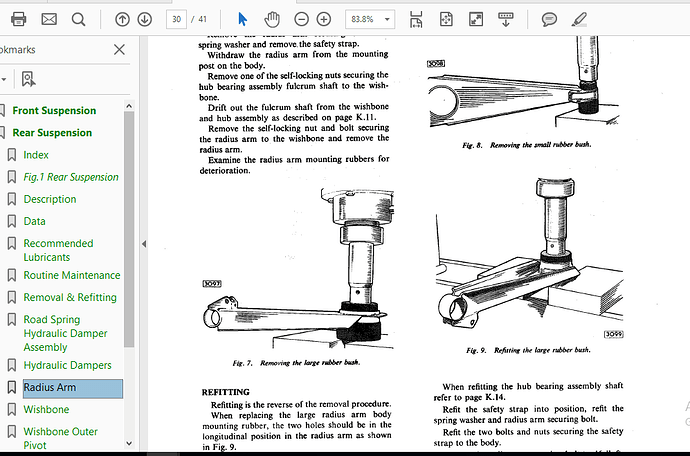 I dont think the manual mentions the ridge which is only on the big end bush.

my memory is hazy, I know I almost did it wrong 1st time, did 2 sets about 12mths ago

**
The good book says ‘holes in line with centre line of the radius arm’, Tony - as Mark states. And cryptically mentions a ‘small hole in the bush core upwards’…

The cut-out holes influence the elasticity of the bush - so while misalignment may not be ‘crap’, it should not be wilfully done…

I did mine a few months ago. The cutouts are supposed to be front to rear to maintain the “Jaguar” ride. Turning them 90 degrees is what Jaguar did for the “sportpac” upgrade.

**
The good book says ‘holes in line with centre line of the radius arm’, Tony - as Mark states. And cryptically mentions a ‘small hole in the bush core upwards’…

Fitting the bush with the “cutout” orientation perpendicular to the radius arm center line is how the XJS Sportspack did it, slightly firmer suspension and a bit more “passive rear steering” effect, as the forces will be compressing the rubber instead of flexing it.

Fitting the bush with the “cutout” orientation perpendicular to the radius arm center line is how the XJS Sportspack did it, slightly firmer suspension and a bit more “passive rear steering” effect, as the forces will be compressing the rubber instead of flexing it.

Well this is intriguing. holes parallel to the front and rear of the car or perpendicular. I am a spirited driver, and enjoy tossing a car into the corner waiting for a bit of oversteer. Though It’s been my experience in a Jag, specifically My XJ-S when the oversteer comes into play it happens very quickly and if you’re not on your toes, you’ll be facing where you were. Does "passive Rear Steering help negate some of the “BOOM!!! you’re facing the opposite direction” or intensify it?

That being said, I don’t know what you mean by “passive rear steering”.

Well this is intriguing. holes parallel to the front and rear of the car or perpendicular.

If you put the holes across the longitudinal axis the mounts will have a bit less compliance fore-aft, so the IRS will move correspondingly less under accelerating/braking.

Thank you Tony, this is a bit better than the Series III shop manual.

back to kinda the original question. or atleast one of them. is there a top or a bottom to the Radius arm? or is it strictly based on bush orientation?
I’ve laid the arms side by side, on the floor, and if I turn one upside down from the other, there is about 3/16 of an inch height difference between the two radius arms. though I can’t tell if it’s related to the bush orientation or if the arm itself has a slight bend to it.

They didn’t design this for dummies like me that would state “TOP” on one of the sides.

Passive rear steer is where there is a built in movement under cornering where the wheels turn outward to ’assist’ the car in the turn; Steering is the collection of components, linkages, etc. which allows any vehicle (car, motorcycle, bicycle) to follow the desired course. An exception is the case of rail transport by which rail tracks combined together with railroad switches (and also known as 'points' in British English) provide the steering function. The primary purpose of the steering system is to allow the driver to guide the vehicle. The most conventional steering arrangement is to turn the front wheels using a hand–opera...

Thank you for the Wikipedia note. I’ll check it out.

Mark
I just had a look under my XJS. I put it back the way it was assembled. The arm has holes top and bottom so draining water is no issue. Mine is assembled with the retaining lip on the large bush end on the bottom.
The photo in the Haynes manual (Page 263) looks like it is the other way around with the retaining lip on the top.
This sorta makes sense because it means that the arm cannot slide down off the bush…but there is a strap there to retain the whole thing anyway…and… it took about 10 tonnes to press it into position so nothing is moving anywhere in a hurry!!!
Either way won’t make a scrap of difference to the mechanism…
The bottom suspension link is mounted on bearings attached to the diff. There is no “flexibility” in this connection apart from the deflection in the arm itself…so I don’t think there is any “passive steering” designed into the mechanism.
The trailing arm is there to help absorb the thrust from accelerating and braking.
But the Jag arrangement has the bottom link taking all these loads so
the outside end of the arm is pushed and pulled by the wheel PLUS it is twisted in both directions by the wheel…this is why it is quite a big thick tube of steel!!!
All these loads are transferred into the diff housing by two bearings which have to absorb the thrust and torsion.
The trailing link is such that it can’t help with the torsion loads but can help with the thrust loads…except that it is designed to pivot so rigidly connecting it to the back axle …which moves straight up and down…would bend something…so there is a large flexible bush there which absorbs the movement.
It looks like there are compromises there to make the system work …but it does work although the complexity makes it quite difficult to maintain the rear suspension and very difficult and time consuming to get it set up correctly!!!
Matt