Lots of conversation about the bonnet fit and how to improve that item. But I have a different issue as of three days ago - my rear boot on the car is now misaligned due to a misadventure on the lift while getting the oil and filter changed at the mom-and-pop country garage near the house. The establishment is owned by an older gentleman who has no problem with me walking around under the car while it’s on the lift, or helping for that matter! Very rare to find this! Anyhow the car went up just fine - but then we got to doing the proper job of lubing the 38 zirks under the car while waiting for the oil to drain. Got them all except for the front driveshaft (fellow SIII owners - when was the last time that zirk was hit on YOUR car???) which is back down the tunnel aways. You can see it but verrryyy difficult to get the grease gun tip to mate. But I digress.

We decided it would be easier to pull the front tires to get to the front suspension zirks so the car was let down and I opened the boot to get the lead hammer and adapter. I left the boot open and back up the car went- and the top of the boot lid got crammed up into the overhead door, which thankfully gave way after a bit of resistance, the rollers popped out of the track. The only damage to the boot lid was that the paint at the edge of the lid chipped off - but now it sits too low by maybe a sixteenth of an inch at the driver’s side where the hinge is. Looking at the hinge, there is no adjustment to it in terms of height- it bolts onto the body with no alignment. Any alignment I can see occurs at the boot side of the hinge and that is only laterally so as to get the gaps right.

The question is therefore for the body experts - is the height at the hinge side adjusted with shims? I am trying that now, but it’s not certain that it will work. Has anyone had a similar experience or otherwise needed to adjust height to the boot at the hinge side?

Thanks in advance,
TameCAT
Mike Burnett

My boot lid hinge has shims - none on the driver’s side but 2 on the passenger side: 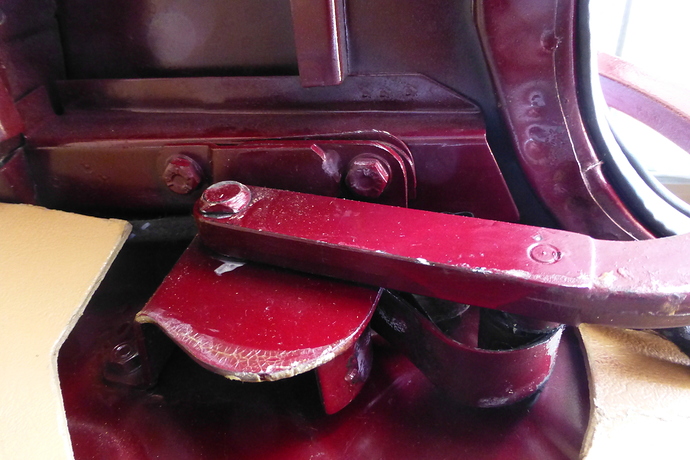 So you may or may not have some adjustment there.

But if you have ‘tweaked’ the arm, shims may not be the answer. 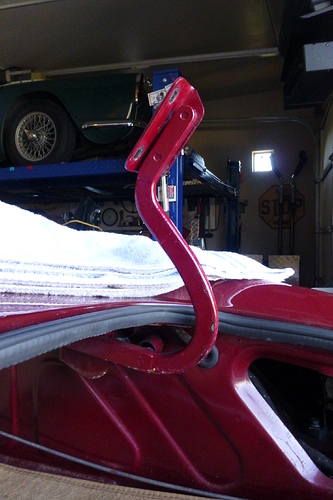 Clarification - and thank you Ahwahnee for the pics- I’ll send one of mine here in a bit-
I should have said that I have the 2+2 - so it’s not the same as the convertible. The lid opens sideways from the passenger side - so the hinges are on the driver’s side.

Got them all except for the front driveshaft (fellow SIII owners - when was the last time that zirk was hit on YOUR car???) which is back down the tunnel aways. You can see it but verrryyy difficult to get the grease gun tip to mate…

Not knowing 2+2s perhaps yours does not have this but on my OTS there is a hole in the tunnel revealed by lifting the RH (passenger side) carpet. Removing the large rubber plug gives access to the front UJ Zerk.

Probably there on mine too, thank you so much for the tip!

Hi Mike, On the 2+2 body, the thing in the rear hole is called a Hatch…and on an OTS its a lid. I wondered what you had, but the clarification came later. Maybe you might include yr car details in yr sign off, and then we would know exactly what you have! So…the hatch is fastened to the rear body by the 2 hinges ( NLA ) and the lock assembly (BD 29683 ) . The former are bolted ( x4 ) to the captive plate inside the pillar. This plate has some slop in it, and also shims ( BD 23164 ) are used.I would imagine that you can change the location of yr hatch by loosening all 8 bolts, and then hunting for the optimal fit. It might be that the overhead “hit” just pushed the hatch downwards a bit despite the 8 bolts!

I will post a picture shortly - as I recall, when I restored the car 28 years ago I had some trouble getting the hatch to fit correctly, I found some shims under the front hinge where it attaches to the hatch.

There is no adjustment to the hinge where it attaches to the car body, but there is adjustment where it bolts onto the hatch (two bolts per hinge). There is a floating plate inside the skin so that you can adjust the gap, but nothing available to adjust the elevation once the hatch is closed. I’m betting the fix involves removing the hinges and slotting the mounting holes so there is some elevation adjustment. Either that or shims, I’ve got probably 1/8" of shims in the top hinge but no sign of proper fitting yet.

The bad part of this is that being low, the hatch won’t open without interference at the outboard side - and the paint there is in serious jeopardy till I get this fixed!!! And there are only three people here working the issue- me, myself, and I…

I have the Jaguar Repair Manual for the car and there is no mention of shims when installing this hatch. That should tell me something right there.

I had just updated my signoff this morning so perhaps it’ll be effective next time I sign off then back on. At any rate, it’s a '72 model S-III, 29 November '71 build according to the Heritage Trust certificate.

The hinges on the OTS boot lid have some up and down adjustment as the mounting holes are elongated. There were no shims called out in the parts manual.

I sprung my lid so the leading edge was up - a lot. It looked like an air intake!
I found all the adjustment I needed in the 4 bolts where the lid attaches to the hinge arm. There’s significant interplay between the fore -aft & up- down.
I tried to convince my wife to get in the boot with a flashlight & wrench while I worked from the outside. No Joy there, so it took a bit of fiddling & fettling.
Point is there was no need to touch the hinge to body mount. FWIW
Dave

I’ve got the hatch off now, it looks like the mounting plate where the hinges mount to the pillar is bent a bit. I’ll see if I can straighten it.

Hi Mike, I see you are making progess.I must admit that optimizing the fit of the doors and hatch is always somewhat onerous Yes the ROM does not refer to the use of shims for the hinges, although they are shown in the parts book of a well know W coast vendor! The 2 holer is BD23163 ( 0.035" ), and the 4 holer is BD 23164 ( 0.030: ). When I did a refit of my hatch ( 1973 SIII"E" ) some years ago, I seem to recall that both sides of the hinge were bolted to moveable captive plates…and there were no shims involved! Hope you get it sorted to your liking.

I’ll be working away today on the issue.
FWIW, the hinges do not appear to want to separate from the pillars after the two nuts have been removed. Really hope I don’t have to get Medieval on them…

There were 4 nuts holding the hinges on, not two - and no, I did not get Medieval on the hinges.

Lo and behold, when I loosened the other two nuts, there was vertical play in the hinge mounting points, just as had been posted by the kindly Mr. Holmes! So unless they were all the way up, I should have what I need with this adjustment.

I’ll post a pic when I get it back on and gapped right.

There is obviously confusion over whether the car in this discussion is an OTS or FHC/2+2. I was responding to “rear boot fitment” and “boot lid” as described in the initial post leading me to believe we were talking about an OTS. Others posting pictures obviously agree. Which is it? 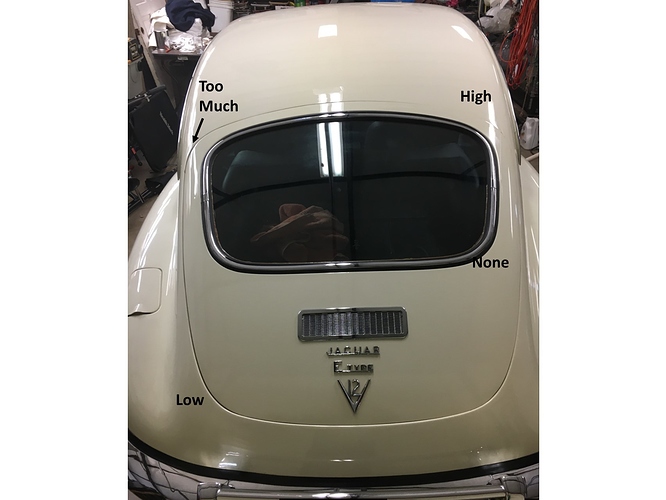 Ok, here’s where I am now - and still in a pickle- The latch side is too low so I’m going to make some shims to go under the latch. Once I get that right and there’s no danger of paint damage on that side, I’ll start shimming the lower left corner to pull the upper right down. I’ve no more adjustment to the sliding hinges so don’t know what I’ll do there.

It appears that the door is warped. If so, adjusting the hinges & latch won’t correct the fit.

I’m lost. You say your car is a S3 but is it an OTS with a ‘boot lid’ or is it a 2+2 with a ‘back door’? Very different hinge configuration. You describe the boot lid so I assumed it is an OTS and responded accoringly.

It’s important that the nomenclature is correct as the Brits use different names for many parts than we Americans. The people on the forum generally use the British terms.

Low on one corner and high on the opposite - looks like if I raise the low corner the high one will come down. Guess we’ll see because that’s what I’m going to do- I’ll let you know how it comes out.

I’m more worried about the gaps than the height - I don’t think I have the play in the plates to get the gaps right. 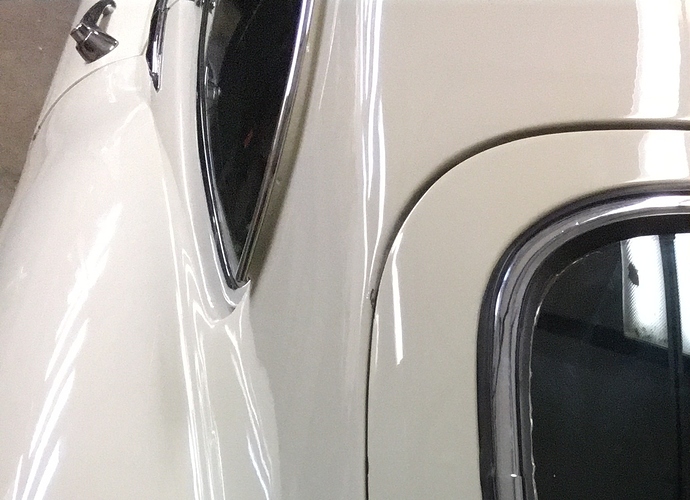 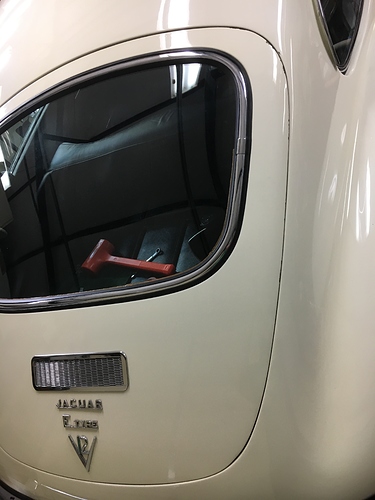 Ok, well it looks like I finally got it close. Thank goodness the hatch wasn’t warped and nothing was bent from crashing into the overhead door. Now for the touchup pen to disguise the paint chips, then try to get the bonnet aligned better

Thanks for all the suggestions and other knowledge.

Good job!Those are indeed close tolerances. The PO of my '63 car had some issues as well and managed to bend the left edge of the hatch significantly. Hopefully I’ve been sufficiently successful in straightening it out. Time will tell when I reassemble for fit prior to paint.