I am starting to plan, what for me, is a major project. Next spring I plan on dropping the IRS so that I can repair the weak to non existent parking brake. I have been told that the ratcheting mechanism often gets gummed up and stops working. I have tried spraying brake cleaner on the mechanism but this did not solve the problem so I will drop the rear end and repair it as needed. Also, I am long overdue for a proper rear brake system bleed. I am not going to do a rebuild of the IRS but just a little “servicing”. Oh, the brakes and rear end all work fine. No issues other that the parking brake.

So here is the list of parts I expect to need and plan to replace while I have the rear end out:

I purchased some Bodge shocks a number of years ago so I plan on installing them too. Not that the shocks are worn out but while I have the parts and the unit is out.

So what other rubber or perishable parts should I buy/install?

Remember, I am not looking to rebuild the entire rear end…just a mild servicing.

Thanks for any suggestions!!

Ooops…I should have mentioned that this is on a 1969 Series II OTS.

One common issue with the handbrake is that the self adjusting mechanism cannot work if the main cable from the handbrake is incorrectly adjusted. It needs to allow the calipers to completely return to rest which then allows the auto adjuster to work/ratchet adjust. You might try detaching the cable and manually operating the levers on the calipers to see if you get some adjustment movement. I’m not describing this particularly well/ scientifically so hopefully someone else will!

So what other rubber or perishable parts should I buy/install?

Are you sure you need a new cable? And it could be the emergency brakes just need adjusting, which is done just in front of the IRS cage. Properly adjusted the e-brake holds pretty well.

The parking brake cable passes through an oval cutout in the sheet metal at the rear of the car. There were remnants of a rubber grommet lining the hole, to prevent t he metal sheath of the cable from banking against the metal of the cutout. I couldn’t find that grommet so I cut a short length of rubber fuel line and tie wrapped it around the metal sheath of the e-brake cable to keep it from rattling around.
Not avery elegant solution but it works.

This would also be an opportune time to change the differential lubricant.

The action of the handbrake also relies on a pair of these ‘forks’ which can get tired or break: 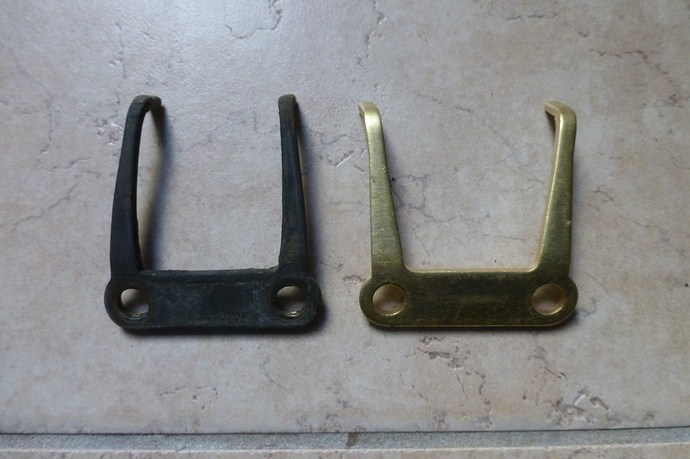 Here’s a broken one that I only discovered upon taking things apart: 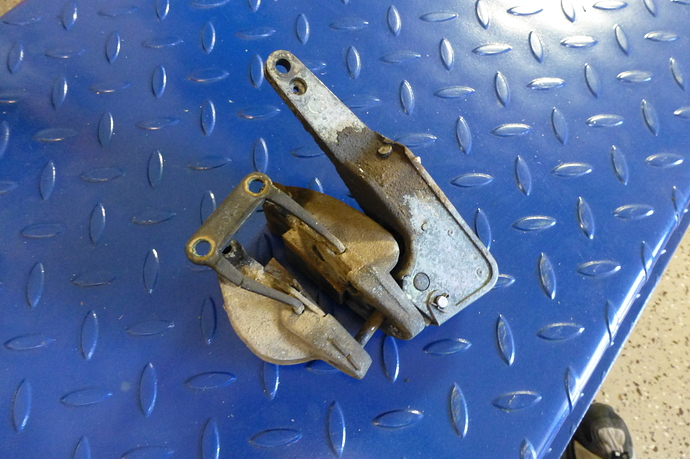 This is also a good time to read about and consider adding remote bleeders to make brake bleeding much easier now & later. One way is a kit sold by XKs and others - it allows access to bleeders from behind the IRS - easily reached without raising the car off the ground: 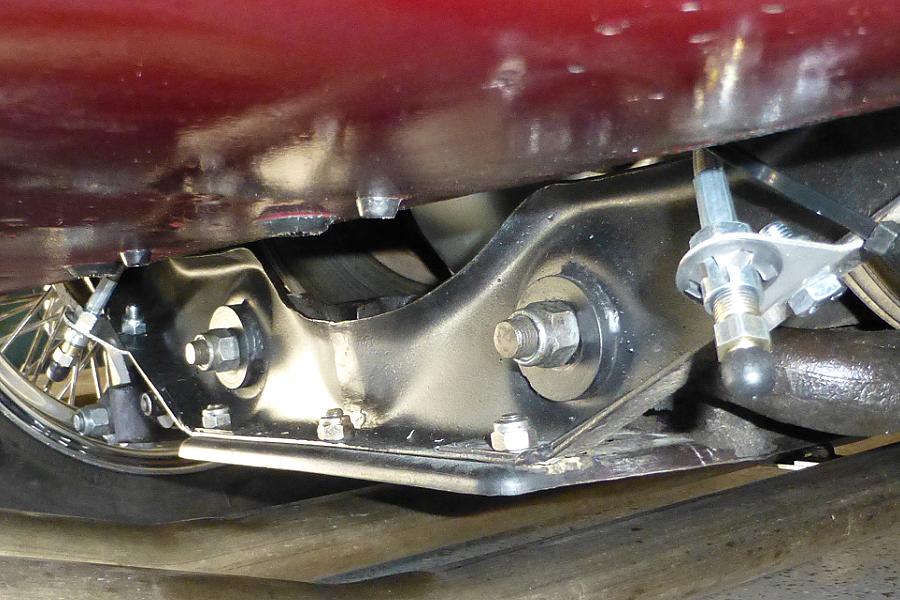 I would do pads, handbrake pads, new handbrake retractor things as mentioned, bending them back is not worth it - good grease, brake flush, look at the safety wiring and replace the four rubber mounts of the IRS as well as maybe the radius arm bushings, especially the small ones, and the roll bar bushings all depending on condition.
The handbrake pad surface must be engaging parallel to the pads and there must be a slight clearance. Do one side at a time so you have a working one to check against.
Remote bleeders are nice. There is a handbrake balancer modification, isn’t there? Something about the pin that the mechanism that splits the force between the calipers.

In other words, maybe not the cable and definitely buy the retracting springs.

Hi
I’d do the handbrake mod suggested by poster Dave K over on the UK forum. 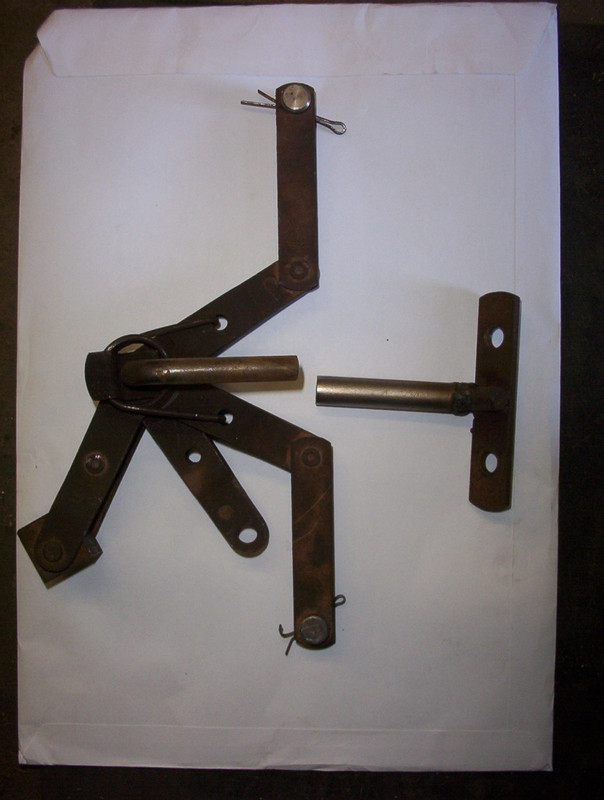 This will balance the pull between each side. Do a search over there and you will find info on it.
Somewhere around is also a very good article complete with pictures on how to restore the handbrake mechanism.
Watch out if you buy a new cable, some are the wrong length, mine was.
The easy way to disconnect/ reconnect the handbrake cable is to partially lower the IRS about a third, on a Jack. This allows much easier access to the Clevis pin.
Make up a dolly with 4 castors and the plate the same size as the IRS tie plate. The height of the castors should allow a low profile jack to slide under the dolly and lift, or lower the irs.

Here is the rubber grommet for the handbrake cable. The same grommet is used for the front license plate rod hole.

That’s what I meant.

Make up a dolly with 4 castors and the plate the same size as the IRS tie plate. The height of the castors should allow a low profile jack to slide under the dolly and lift, or lower the irs.

Or get/lend a gearbox jack, like a small scissor lift, on casters, has been useful more than once by now

On my hand brake re-re-build, i replaced the ratcheting nuts in the mechanism, and drilled out the rivet in the balance linkage that i could never get to move freely, and replaced with a clevis pin.The pads need to be adjusted to the spec before putting the cotter pins in the self adjuster. The XKs remote bleeder or nice, but the outboard end is not firmly attached to the bracket, and needs two wrenches to bleed the brakes. Using the inner tube presure bleeding made every thing easier.

Or get/lend a gearbox jack, like a small scissor lift, on casters…

The one sold by Harbor Freight: 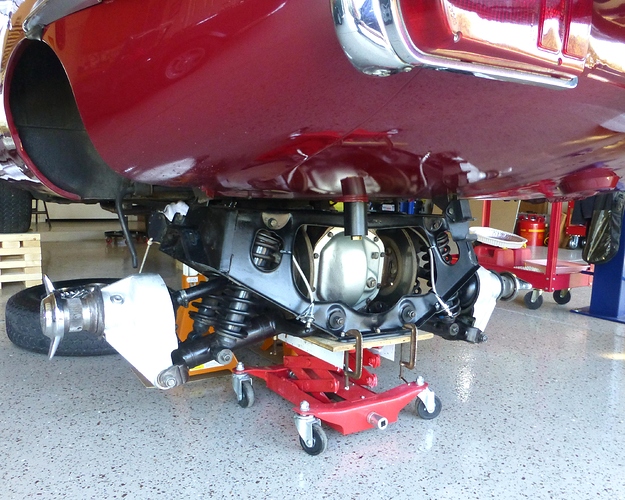 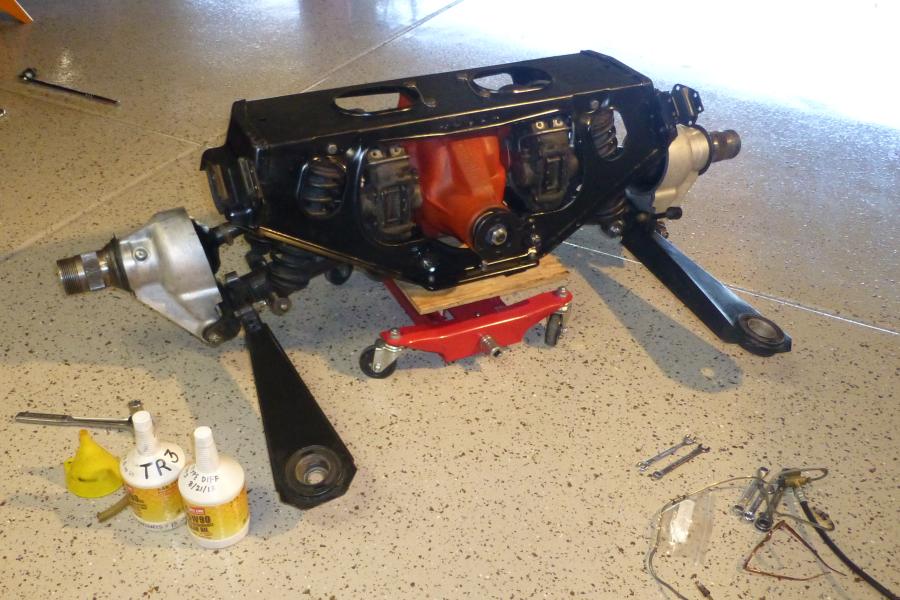 A motorcycle one look like it could work perfectly, mass produced and cheap…

Thanks for all the responses! There are some great suggestions!

I will definitely be adding the brake fork/retractor to my parts list for purchase. I will have to do some research on the handbrake mechanism modification. I have not heard of this before. Sounds like it would be worth doing. I’ll also order up the cable grommet. It would be the right time to replace this. (I just had a thought… I wonder if this grommet is in the body kit I bought a number of years ago from XKS. There are a number of pieces that I haven’t gotten around to installing. I’ll have to look.)
I’ll see if someone in our car club has a gearbox lift. I was just going to use a low profile jack and possibly the small furniture dollies I have. A gearbox or motorcycle lift would certainly make the job easier.

In my research so far it seems the remote bleeders from Bob Beere are highly regarded and I like the price.

Replacing the diff oil and the safety wiring are worthwhile tasks. I’ll add to my list of to do’s.

Thanks again for all your input… The folks on this forum are great!!!
Phil

I removed the cup on my small floor jack and bolted on a piece of 2X8 about 10 inches long in it’s place and used that to lower and raise the rear end. It was much more stable than I thought it would be. This is the best picture I have of it.

You have probably already searched the forum. This post may be useful: Weekend work - Pulling an IRS

I also suggest you consider the age and condition of the disks. To replace them, you would need to remove and replace the calipers. But it will never be easier to do.

Liam, Thanks for the link to the other thread…it was interesting reading!
I am hoping my Series II has the easier to deal with trailing arms/shocks so the bushes are easier to replace. Here’s hoping!!
I’ll be checking the condition of the rotors when I get it all apart. I’ll certainly replace them if needed. I hesitate to mess too much with the brakes as they are working fine.

I rebuilt the handbrakes myself as part of the rebuild. Quite easy and there are a few videos that show the process online. The forks, locktabs and pads are the only things i needed to replace to get the units working really well.

There are a few myths about how the mechanism only applies pressure using 30% of the pads even when new - i found that the pads aligned perfectly with the disc once the fork was replaced and ratchet mechanism reset.

I also spent about £200 quid on a home blasting cabinet and a home plating kit - I am not getting great results on the bigger brake callipers, but the smaller handbrake parts came up a treat.

I also rebuilt the tightening mechanism, but in the end opted for the upgraded redesigned part from SNG which, seems to be a real winner if originality is not an issue for you.

It is very satisfying to achieve results like that.