Can anyone supply me with the tolerances on the rear brake rotors for my Jag Mark IX?!?!
It would be great if I could get all the measurements for the bolt pattern, size, width length etc. but what I absolutely have to have, is the thickness of the rotor itself. What is the max, what is the minimum.
This is the best form for that type of information and my appreciation is beyond the max! Thank you in advance…

I did a drawing of my MK9 rear discs a few years ago, so have all the details somewhere which I will post ASAP.
The width however is a bit debatable as they had been recut and were down to about 1/4 inch, which I deemed to be bordering on dangerous. I suspect the original width was 5/16.
As I have posted before, if you require new discs, those from a Vauxhall Movano, or equivalent, Renault or Nissan, will fit with a few slight modifications. I have the machining details. These discs a really cheap and readily obtainable.

I don’t believe there is a machining allowance on the old rotors, they were of a much more durable material than todays items.

You’re right about that, Robin! The original brake rotors were much harder than what’s being made today. But there still has to be a tolerance as to how thick they can be within they can be and that’s where I need to find out.

Wardell,
Thank you for your wonderful input on this subject! Sounds like you have the information I’m really looking for! I would love to get the details on compatible rotors like you had mentioned above. Would you be so kind as to share that with me?
Thank you,
Jim

I’ll get into the workshop tomorrow. The Vauxhall/Renault discs can be used with the original calipers or the superior 420 ones, which don’t easily seize up. I’ve got the part numbers somewhere.

Can anyone supply me with the tolerances on the rear brake rotors for my Jag Mark IX?!?!
It would be great if I could get all the measurements for the bolt pattern, size, width length etc. but what I absolutely have to have, is the thickness of the rotor itself. What is the max, what is the minimum.
This is the best form for that type of information and my appreciation is beyond the max! Thank you in advance…

Assuming they are 1/2in. thick, then going by the machining allowance on a modern 1/2in. disc, the minimum thickness would be 0.45in.

Thank you, Wardell! You have no idea how much I appreciate it and I’m looking forward to getting that information…

One of the reasons that I replace brake rotors routinely is that it’s getting hard to find a shop that will actually turn them in my area. The ones that do, have old worn-out equipment that doesn’t do a good job. If you are lucky enough to have a quality shop in your area, they may have the specifications for thickness and run-out. 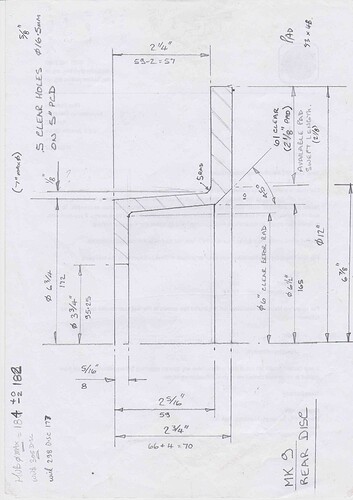 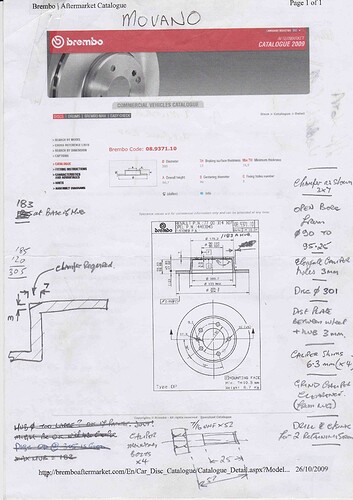 20211118_160247436_0022480×3507 243 KB
The above 3 photos show details of the MK9 rear brake disc conversion I completed some 12 years ago.
The first shows a drawing of the original MK9 disc, with an assumption that the original disc plate was 1/2 inch. I now think it was 3/8 or 5/16.
The other 2 drawings show the Brembo engineering drawing of the alternative disc which can easily be machined to suit, the part numbers that various manufactures use for these alternate discs, and the vehicle
applications.
When I did this job, MK9 discs were difficult to get hold of and cost around £200 pounds each. The alternative ones cost £25 each from my local factors and were immediately available.
I’ll go through the machining procedure which I did myself on my Harrison L6 lathe. (12inch Swing).
First, bore out the center locating hole from 90mm to 95.25mm. Then file or mill the 5 mounting holes, that is elongate them slightly), to account for the fact that the MK9 disc PCD is 5 inches (127mm) and the alternate disc PCD is 130mm.
The disc will now fit over the studs, but the inside of the boss will just foul on the bottom of the caliper mounting bracket. So, put it back in the lathe and machine a 3 X 7mm chamfer on the boss, and offer it up again. It should now clear, if it still fouls, file a little off the bracket and all should be well.
Finally drill and countersink 2 new holes for the disc to hub mounting screws.
Job done!.. Well nearly…
Because the alternate disc is 1/2, the original Dunlop, crap, always prone to seizure, calipers will fit, but the new pads you’ll be fitting will be a bit too wide to slot in. These will need rubbing down a couple of mm to suit.
My MK9, being an early 1959 model has the non self adjusting handbrake and I didn’t have any trouble refitting it. I can’t see any reason why the later self adjusting one should be any different.
Alternatively you could skim 1/8inch off the inboard face of the disc, this would mean no alteration to the pads and no need for the chamfer on the inside of the hub to clear the caliper.
If you wish to go a step further you could fit the later 420, 420G, series 1 XJ6, EType calipers made by Girling. These don’t seize up every 6 months, are easier to refurbish, and have a larger more robust pad. The bore of the cylinders on these is within 1/16 of the originals, so won’t cause any front/rear anomalies. These bolt straight on, you’ll need some longer mounting bolts, (7/16 UNF x52mm), and some 1/4 inch spacers for centralisation. The handbrake cables might also need tweeking a bit. It will also need the hydraulic pipes re routing, preferably in cunifer as there are some tight clearences to negotiate. Needless to say if you’re going down this route you wouldn’t be skimming the inboard face of the disc as the Girling calipers are designed around a disc with a 1/2 inch plate.
If you dont have access to a lathe and aren’t going to skim the disc down you could simply file or use a small grinder to adjust the disc to suit.
I have explained some of this procedure some years ago on this site, and might have even put on some now long lost photographs of the alternate disc with the original Dunlop caliper mounted. You might like to search these out.
I think that’s probably enough information to keep you going for a while…!
Best wishes from York, Yorkshire UK.
Ps if you get an old British TV show called Heartbeat where you’re living, my MK9 is in a couple of episodes.
3 Likes
lovethamarkix November 19, 2021, 4:18am #14

Thank you very much, Wardell! I’m going to show this to a friend who is an engineer and a jaguar aficionado. To me it’s like another language but I’m sure he’ll understand everything you’ve written.
You had mentioned something about a Nissan desk that would work. Is that in this information and I just missed it or is that something else altogether?
Again thank you very very much for all your time and efforts to get me this information. I hope it helps out a lot of people also!
You’re a true gentleman my friend…
Jim

The Nissan I referred to is one of several vehicles, along with Vauxhall, Opel and Renault, (and probably GM in America), all of which build a light van to which the chassis and braking system is common and use these discs on the rear. You’ll see that the Brembo page has a Nissan listed on it.

Well the front where definitely 1/2in, because Jaguar used them on the Racing LW E’s, and Jaguar have never used less than 3/8in on any car.

These days it’s common to print the max and min thickness on the edge of the disc somewhere. A bit of wire brushing might reveal them but I don’t know if it was done in those days because, as said earlier, the discs were made of much better stuff years ago.