Does any one have a tip regarding replacing rear gear box oil seal on a mark V or is the process set out in the work shop manual sufficient?

Yes, it’s pretty simple.
The most work is getting the front driveshaft out of the way first. 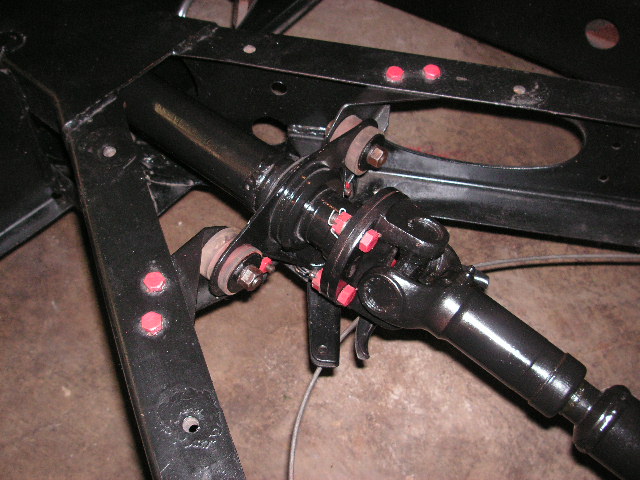 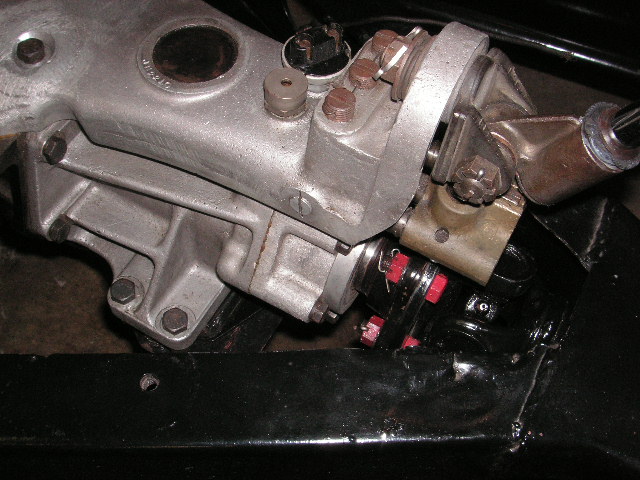 Then you can pull out the split cotter pin.
Remove the big nut.
Pull out the flange. 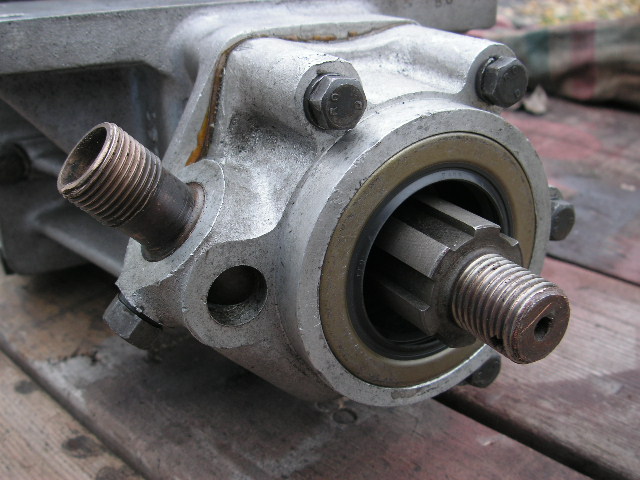 Pull out the old seal with a seal puller. There are many types on the market. This is what I use. I got it from an old retired Viking marauder who called it his Saxonator. 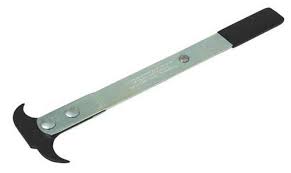 Tap in the new seal evenly with a large socket or pipe nipple.
Put the flange back in.
Install the big nut, but not tightly, back off a little bit, so the flange is free to rotate, but there is not a lot of end play, and so you can put the new split cotter pin in.
Then put back the front driveshaft.
Here’s my old and new together. 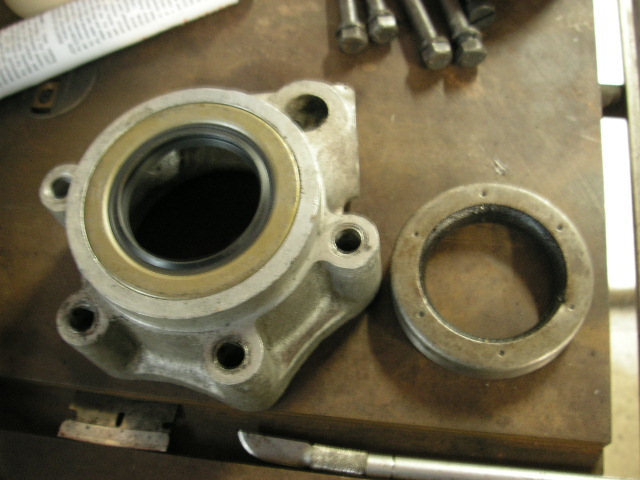 I have just done this job a couple of weeks ago on my SS. It is quite difficult to get the new seal to enter the rear casing evenly. To aid this I took a sharp knife around the rim of the casing to provide a small chamfer. Once you have got entry all round then clamp the casing and new seal between two flat pieces of wood in large vice and tighten up the vice.

When remounting the casing on the gearbox I also had difficulty in entering the speedo drive until I realised that I had not tightened the set screw behind the drive bush sufficiently. See the last posting in this thread:

Thanks for the info, is it necessary to remove the rear end cover to replace the seal? I have been experimenting on my spare gear box and to get the nut off is a challenge I have not over come, will heat assist?(using heat gun)

Which nut are you referring to? Clearly it is essential to remove the big nut and the flange. If you are referring to the bolt retaining the the speedo drive bush you might get away without removing the bush/drive cog but I’m not at all sure about that.

I would say it is necessary to remove the casing because of the difficulty in controlling the pressing in of the new seal so that it enters straight. Having the casing off enables you the use a vice to apply the pressure and is nice and slow and controlled and has a better chance of keeping the pressure parallel to the face of the casting.

Thanks you just confirmed my thoughts, getting the big nut off will be the challenge!!

Hi Grant, you never said, but I assume you are doing this from under the car?
First, did you get the split cotter pin out? You might need a punch to get it started, then long nose pliers to pull it out.

The big nut takes a 1-1/8" socket, but 28mm might fit. It should not normally be super tight. If it is, somebody over-tightened it. 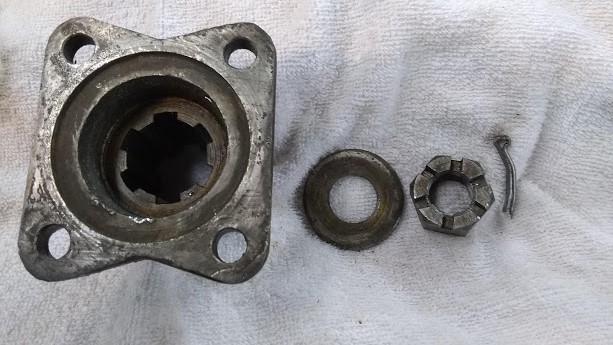 The flange might be tight on the shaft. I got mine loose like this, then removed the gear puller and it slid off easy. 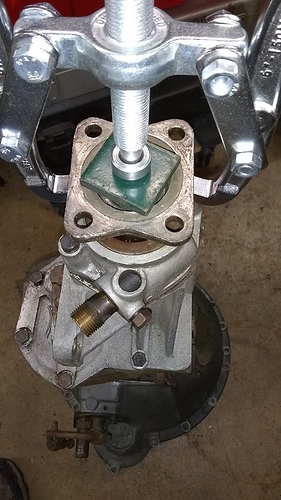 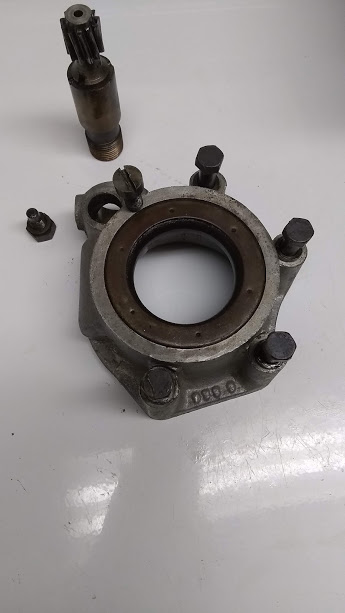 I was practicing on my spare gear box, I have removed the split pin Ok and tried my rattle gun it is now soaking in CRC.

I will be getting the one on the car off while up on a hoist, I have to remove the front propellor shaft first, I will try later this week and let you know how I go. Thanks again

I assume that you don’t need to take the top cover off the gear box to do this?
Thanks

I have removed the split pin Ok and tried my rattle gun it is now soaking in CRC.

You must have a rare collectors item , A Moss box without the chassis lubricating system
You shouldn’t need to take the top cover off to access it.

I assume that you don’t need to take the top cover off the gear box to do this?

I assume your problem is that you can’t apply enough torque to the nut because there in insufficient resistance to your torque from the shaft. I experienced this too when I tried to release the nut on my spare gearbox that has nothing to resist. One way to lock-up the gearbox is to engage two gears simultaneously but you need to remove the top cover in order to do this. Even after doing this I had difficulty preventing the whole gearbox from rotating.

If the gearbox is still in the car and attached to the engine, why not put the car in first gear and then remove the nut? An impulse blow to the removing wrench (or an impact drive tool applied)?

Alternatively, if transmission is still on the car, one may build a brace bar that mounts onto the flange to oppose rotation by bracing against garage floor or vehicle frame, depending on jacking height of vehicle undergoing repair.

For an out-of-the-box idea, maybe considering a drip pan(s) under the car in the garage as an alternative repair. If the gearbox drip from the rear seal is low (and each person decides for themselves what that means) then a pan is far less work. It took 15 years for the differential seal to build up a leak rate deserving change on my Mark V, I did not mind 2 tablespoons a year leakage.

There is a bit more than the odd drop a large puddle is closer to what is occurring. When driving along we do get a bit spinning onto the exhaust causing a bit of unpleasant smoke, I have managed to get the nut off the spare box and heading off to get gear puller to strip this down and refurbish this as well.
Out of interest is there any other place on the box that the oil could be coming from?

Out of interest is there any other place on the box that the oil could be coming from?

Short answer … Yes… But not as much, Gear selector rods. for example

But importantly It’s no use just replacing the seal if wear it runs against is scored. f not too bad and you have the equipment a light grind of the surface are on the yoke where it runs. But an easier solution may be to put a Speedi sleeve on the area. The last one I bought o put on a half shaftcost about AU$ 30

Just managed to pull the spare box apart and there is a grove about were the seal runs is this normal? Does any one have a photo of the flange on the mainshaft where it goes through the oil seal? This is what appears to be worn as there is a pronounced grove on mine, if it supposed to be uniform then the problem is clearly the worn grove??!!

Out of interest is there any other place on the box that the oil could be coming from?

Yes, the bush for the speedo drive is another place to suspect. There is no seal between it and the casing.

There should be no groove. Grooving like this is a normal symptom of the millions of revolutions of a shaft or spigot against the lip of the seal. The same occurs at diff flanges and crankshaft seals, despite ample lubrication. If the box is out, it is highly recommended to check and renew the input shaft seal as this is a big job at the best of times and can cause contamination of the clutch and a fail on roadworthiness inspections.

If the groove is only slight, a new seal could still seal effectively, but usually some surface dressing is required with very fine emery or wet and dry. You can test the suitability of the seal by dry-fitting on the flange spigot and turning by hand with the seal seated exactly on the groove. If there is resistance and obvious pressure being applied by the seal, it should be fine. Otherwise a ‘speedisleeve’ is the simpleset solution.

Just a comment about releasing the flange nut, I have found it to be very simple when out of the car by fitting a pair of stillsons wrench placed on its back across the flange and standing on it whilst turning the nut. This way the reaction is not reliant upon the 'box being locked up internally. Because the stillsons are static and not turned, there is hardly a mark left on the flange. The reverse is effective for re-tightening. It might be possible to do something similar in the car if there is a suitable chassis component to bear the leverage of the stillsons. 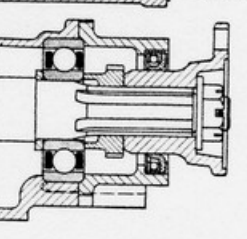 I hope to have the carport tomorrow, from measuring the spare part the diameter mics at 1.75" 44.45mm if necessary a speedi sleeve of 1.75" is available.

Groves happen over time, and a bearing house should have a SpeediSleeve, to repair it,per Nantes.