Ah yes, FiBoy’s XJC, is a reference in many ways. What an admirable project. Thank you for rescuing his content. What a pleasure to read (again).

Where is that awesome XJC now?

I like this. And the smooth one piece bumper is stunning. 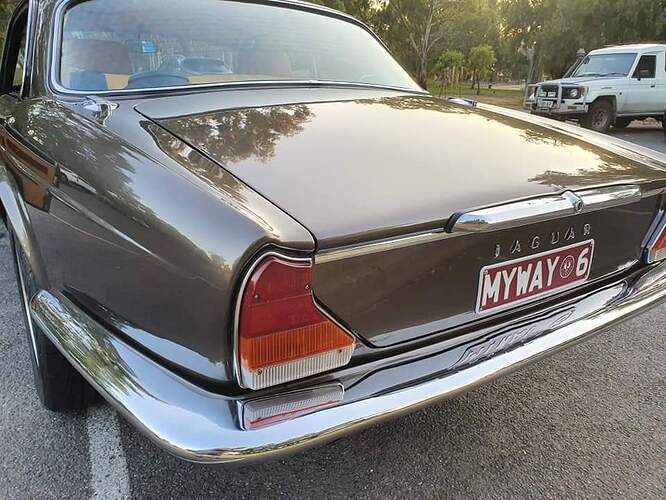 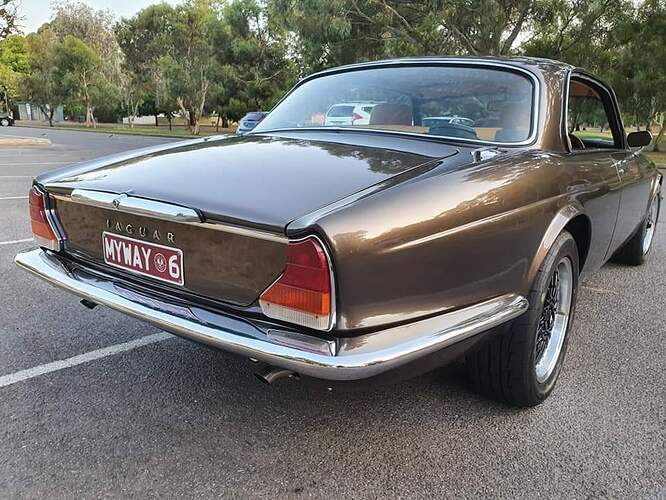 But, I must say, I do prefer the S2 rear lights, they are so iconic. This is actually working well. 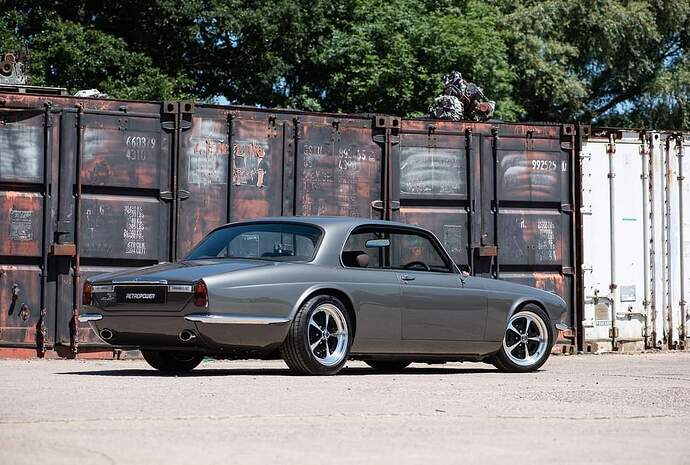 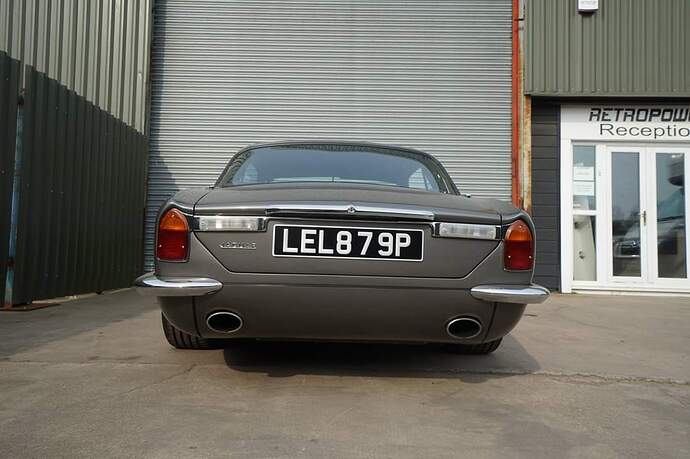 His estate. AFAIK his wife, now a widow and two sons and a daughter.

Yes, that one piece bumper may be a PITA to fit, but it looks sublime.

If you also decide to change the rear plinth, please sell the original one to me, the one on my XJ6C #2J50041DN is very tired and I have not found a matching one at Stoneleigh etc.

Might there be some way to utilize the SII taillights yet not have to have those giant rectangular back-up lights?

I am actually thinking of keeping the SII reverse lights, but turn them (in a stealth way) into sequential turn blinkers.

Prepared to pay shipping from California…?

I am actually thinking of keeping the SII reverse lights, but turn them (in a stealth way) into sequential turn blinkers.

I currently have a Daimler S2 bootlid plinth fitted, but I agree that the Series 3 plinth is the nicest (.both contain number plate lights). I bought one, but got stuck with the different lock arrangement. Any advice for fitting the S3 lock to an S1?

Ah, yes the third braking light. Great idea. I’ll probably do that too, drivers in California in their ridiculous SUVs are SO distracted, it’s scary…

I also just discovered that I will have to figure out the lock. This never ends hey??

There is always something solemn about the opening of the box for a NOS part.

It looks damn good! And I had to drill more holes in the trunk lid to trial-fit it.

I now also have at least 17 old holes to weld shut. Still undecided on a few of them. 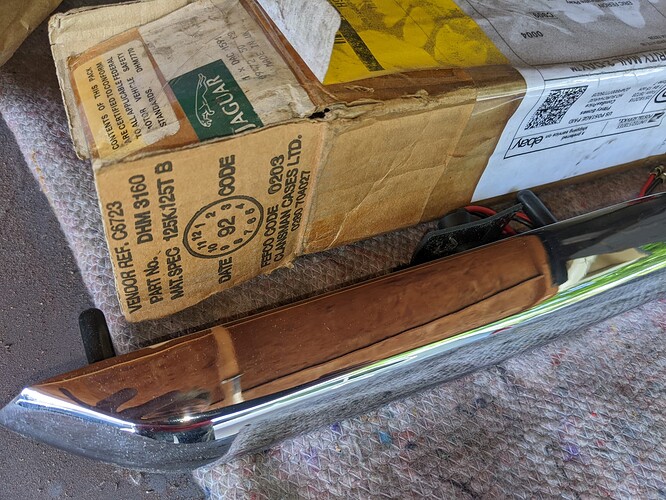 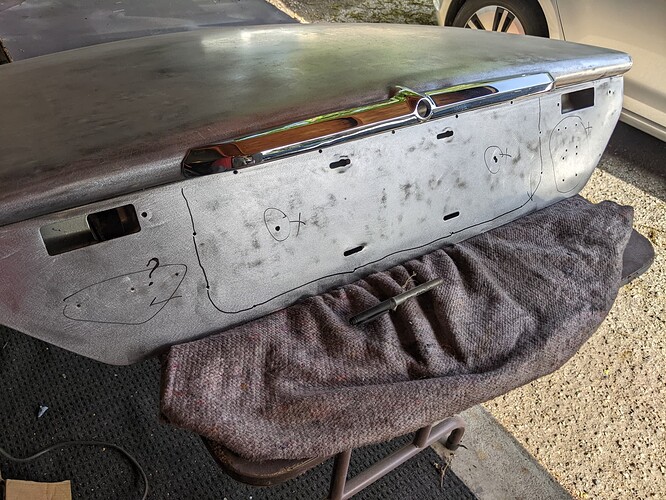 And now to figure out what the hell goes inside there, so it actually also works, beside being pretty… 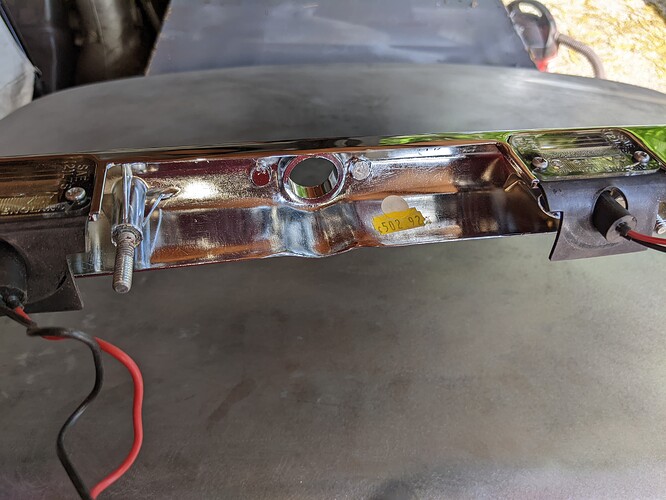 And now to figure out what the hell goes inside there, so it actually also works, beside being pretty…

It’s the opening handle that goes in there.
Don’t know how the S2 set-up is but the S3 has is a second big hole, besides the lock barrel hole, for the handle’s shaft.

Why don’t you get another, s3 trunk lid at this stage and save yourself hours of welding up and experimenting and looking for missing parts?
I‘d definitely not want the reverse lamps if going to s3 rear lights
You could even paint both lids and go back some day; only the rear lights will need enlargement so you can’t go back there. If you keep the gothic lights the s3 lid is still an idea because you can get all the parts off it for little money.

Why don’t you get another, s3 trunk lid at this stage and save yourself hours of welding up and experimenting and looking for missing parts?

I’d have to cut out the rectangular holes for the reverse lights that I want to keep. No easy solution.

Then you should keep the S2 lights as well.
I like very much the way the tail light’s chrome joints the revers lights chrome.
The one without the other will not make sense design/aesthetics wise.
One thing I would like is to have solid red rear lights, or all clear, or even smoked.
I think that if they were all the same colour it would have a very nice effect.
But that’s personal taste and all depends on the “look” you want…

One thing I would like is to have solid red rear lights, or all clear, or even smoked.
I think that if they were all the same colour it would have a very nice effect.

Not sure I understand. You are referring to S3 taillights? While the S2 were red/amber, S1 were all red. S1 and S2 lenses interchange.

Boring anecdote (sorry): My 73 S1 came with red/amber taillight lenses (and bootlid plinth) that would be carried into S2. The Missouri state inspection station rejected my taillights because they were not all red, as required by law. I replaced them with S1 lenses. Then I realized that the amber portion emitted red light (due to an internal red filter) and was therefore legal. But I didn’t fuss, as I preferred the appearance of the all-red lenses anyway.

While the S2 were red/amber, S1 were all red.

Either wrong or market depending. I know both in the S1, but I think they were red in the us until some point.

I agree either S3 or S2. S2 lights and S3 plinth should work nicely (My favorites are S3 and S1 early, with integrated reflectors but those are hard to find).

I believe cutting square holes in the S3 lid would be straightforward! I thought you were counting the holes too when you said you had at least 17 holes to finish (don’t know much about golf).

In the US, S1 taillights were all red until 1973, the last year of S1 production.

An amusing Jaguar factoid: The early S1 Daimler bootlid plinths were fluted and quite long. They replaced the “wings” on early cars and did not contain lights. Later S1/S2 Daimler plinths were similar but did contain number plate lights (which were removed from the bumper). These plinths had more fasteners than the Jaguar S2 plinth, which was shorter. However, when Jaguar introduced the sleek S3 plinths (smooth for Jag, fluted for Daimler) they used the same mounting locations, and the same rubber seal/embellisher as were used on the earlier Daimler plinths. But as mentioned the lock is quite different.

A Craigslist ad for a S2 lump just appeared in the LUMPs thread. It has S3 flush door handles, and an S3 bootlid including the narrow plinth. Looks very nice. Could have modified an S2 bootlid I suppose (welding up the reversing light openings; figuring out how to fit the S3 lock).