How far do you have to pull the engine down to replace the rear main seal on earlier V12s.

If the engine is out of the car and upside down with the sump off. If all main bearing caps are removed - is the crank then “loose” enough to lift up at the rear to gain enough clearance to install a new rope seal?

Or do you also need to remove conrod caps and timing gear etc at the front.

First, note that the early rope seal almost never needs replacing. If it’s leaking, it’s usually due to a fault in the PCV system.

If it must be replaced, officially the crank must be out of the block, which means the engine needs to be out of the car. Unofficially, there’s a tool called a “sneaky pete” that’ll pull the upper rope seal in from underneath. You’d still have to pull the oil pan and the sandwich plate and the rear main cap, which is no easy trick in the car.

If you must replace the rope seal, many recommend the Ford 460 seal instead of the Jaguar part. It’s a little longer so it needs to be trimmed, but it’s graphite impregnated rather than simply waxy.

Thanks for those comments - yes the seal is leaking and has been for a long time - not a lot but enough to be annoying. Back in 1994 a Etype driving behind me complained of oil drops over his car.

The engine is coming is out for other reasons but will not be pulled down and I figured it would be a good time to fix this issue - but if the bottom end and attached bits have to come out I will not bother.

Thanks for the information you have provided.

G’day Garry,
I replaced my rear main seal in my XJ-S in Darwin last year, engine in car. We had to drop the crank shaft to replace the rope seal, which was challenging. I did call JagDaim for the replacement seal, and Bryan recommended:
engine removal;
turning the engine upside down;
replacing seal with a Ford substitute.
If you have the engine out I’d recommend the Bryan (jag Daim) solution. You may want to order the replacement seal from them as you will get the kit.
Regards,
Chris

Hi Chris – thanks for that very useful information. I might contact Jag-Daim and get a kit so that it can go in when the engine comes out.

I recently dropped the sump and pulled the rear main cap to investigate our 72 E type oil leak. The rope seal I replaced and sized via ROM procedures 20 years ago appeared fine. I saw no evidence of failure. IIRC it was the improved graphite impregnated seal when Tom at BA USA in Manchester NH was my parts guru then.

As Kirby suggested in his awesome book, I closely inspected the side seals and saw evidence of leakage and also at the top mating areas.

The PCV system was verified before sump teardown as Kirby outlined. 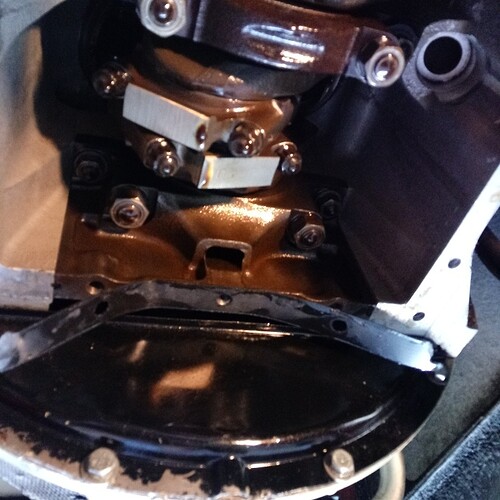 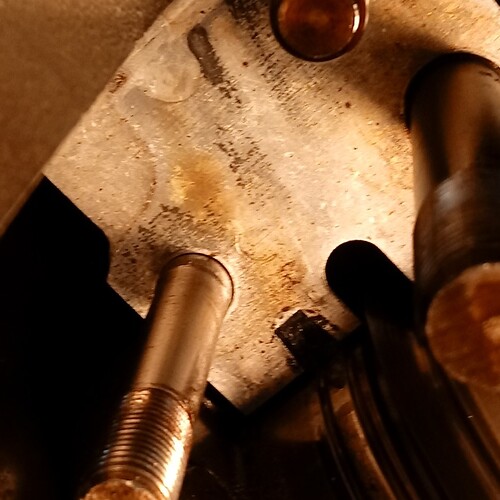 Rope seal and crankshaft appeared happy. Oil seen on crank flange…wrong side. Block mating area oil on “dry”(wrong) side on both sides. 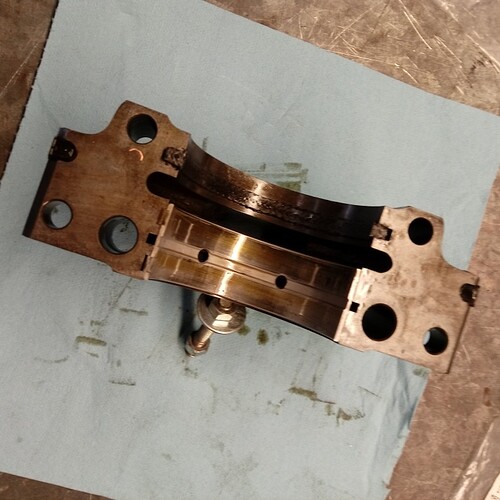 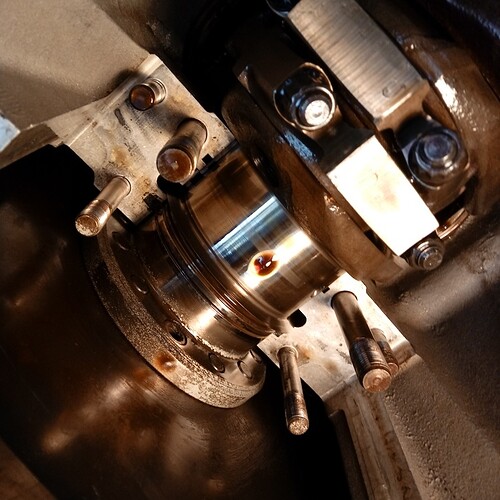 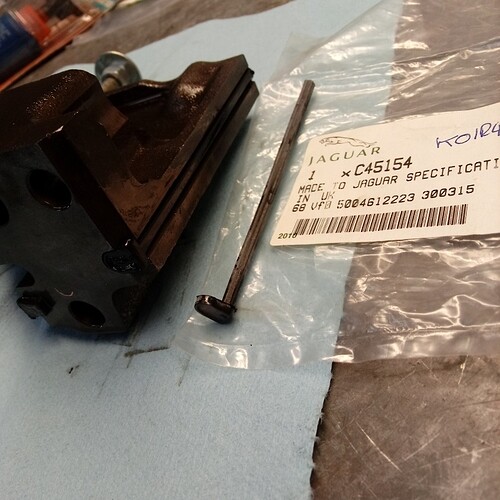 Also seen on the “dry” sides of the side seals up high. 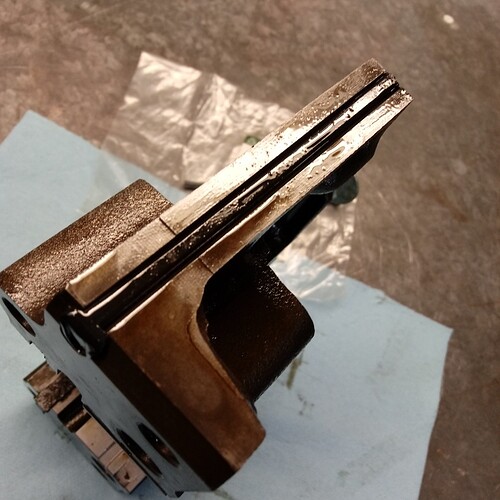 Cleaned and prepped ready for new side seals. I decided to not use RTV on the side surfaces and stayed with the seals with a small bead of added sealant. 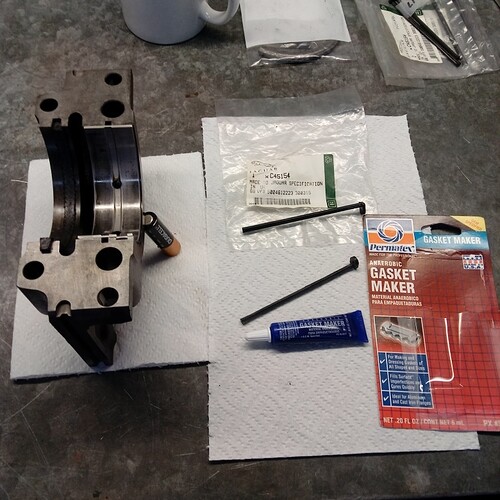 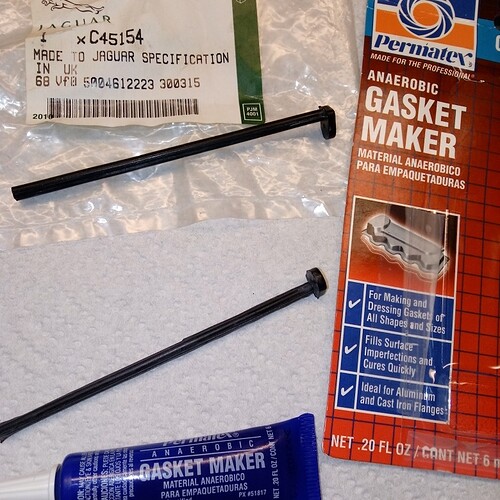 Kirby’s suggestion to add sealer at the top of the cap shown. I also added to beveled top edges. The top of the side seal is designed to prevent leakage there but I added sealant at the beveled areas for extra protection. 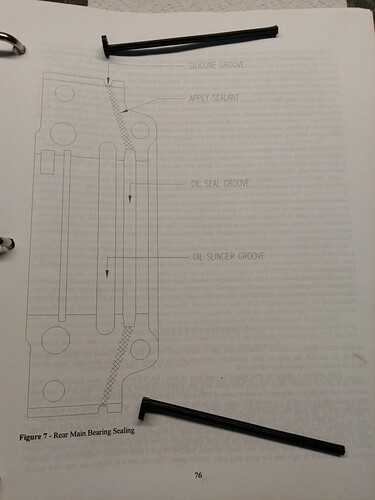 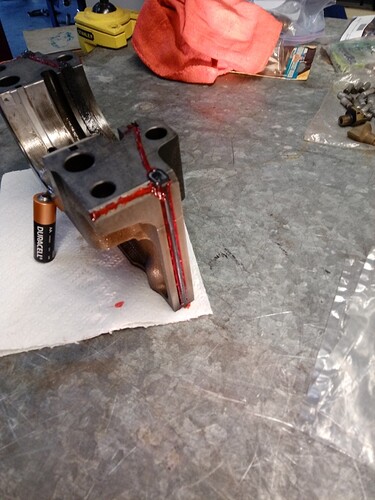 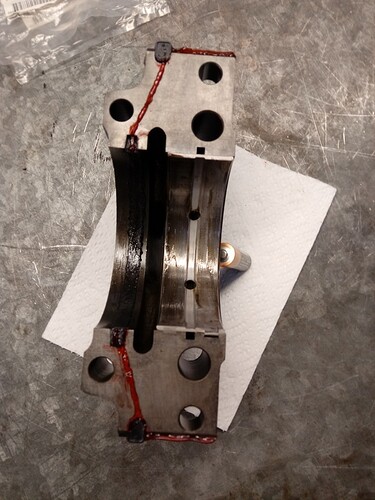 Reinstalled and torqued. Trim the edge of the side seal where it mates to the sump if necessary. 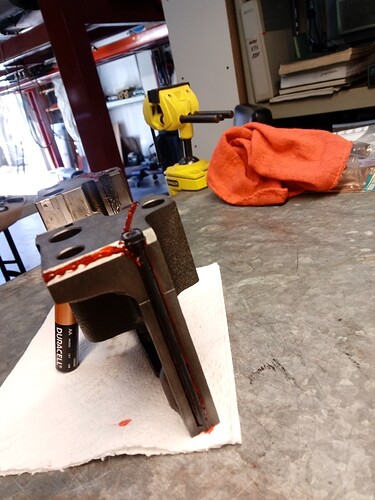 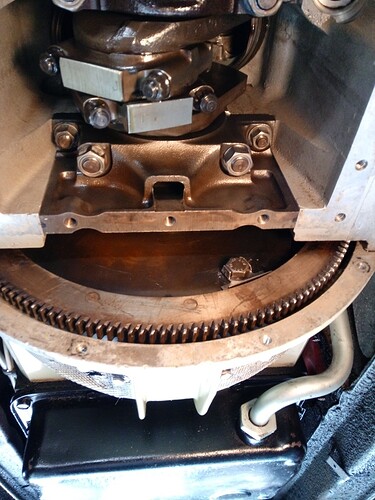 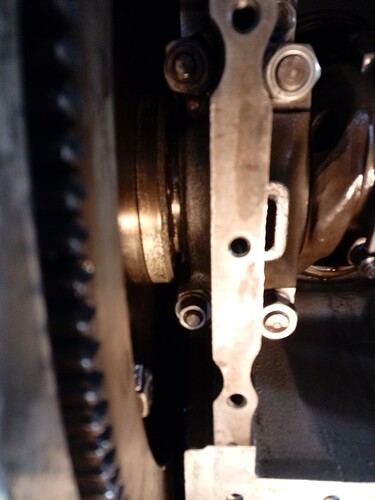 Are those hockey sticks? I didn’t think they existed any more! You don’t care for Jaguar’s update to toss those things and inject that groove full of sealant instead?

Yes they are… I thought you might notice that… lol.

So about 6 years ago I bought a pair from SNG and they doubled the order so I kept all 4. Right… about $20 each. So I know the sealant idea as your book mentioned but I decided to use the seals along with a bead of the red Anaerobic stuff along the edges.

I felt it’d be a mess for the next guy and harder to remove the cap later using RTV. Cuz I might be the “next guy”.

I still need to run up the engine so I’m hoping all will be good.

Thanks for the input to this thread - great information but like many threads there is a little conflicting information.

We all seem to agree that with the engine out of the car, engine turned upside down and with sump and bearing caps removed the top half of the rope seal can be replaced.

The difference in views comes from how much pull down is required.

On one hand there is a view that with bearing caps removed there is enough wiggle room at the rear to lift the rear crankshaft enough to do the top half of the seal.

On the other hand, there is a view that there is not enough wiggle room and the timing gear at the front of the engine also need to come off to enable the crankshaft to be lifted enough.

So what is it - not challenging either view as I dont know - just trying to clarify.

Never done it but I imagine that once you have reached that deep to the point of removing the caps, removing the crankshaft would be a relatively minor task?

But the discussion is not about removing the crankshaft but lifting it at one end just enough to get at the seal. If the timing gear has to come out as well, it is no longer a relatively minor task.

If the timing gear has to come out as well, it is no longer a relatively minor task.

Yes, I see your point if the the timing gear can stay in place.

Other than Aristides comments has anyone else got a view on whether just the bearing caps need to be removed or the timing gear as well?

So none the wiser as to whether the timing gear needs to come off the lift the crankshaft enough to replace the upper section of the rear main oil seal.

Oh well when the time comes I will see.

I suspect you have not gotten a definite reply because no one knows for sure. My guess is that it’s possible but unlikely. The rope seal is usually a tight fit in the block. You can’t just push it out, it has to be physically removed via a thin screwdriver or suitable substitute. I seem to remember, a long time ago, where a device called “Sneaky Pete” would attach to one end of the rope seal and pull it out. If removing all the bearing caps gave you enough space to grab a portion of the rope seal, then such a device might be your best option. Good luck.

If you can’t get the current seal out then this question is academic.

If you have already sized your replacement and it is nicely over-length, then merely lowering the crank at the rear end should give you enough wiggle room to pull/push the new top half around.

A sneaky Pete will cut into the innards of the rope seal, but using some tape, you should be able to temporarily tape the end of the seal to the crank in a tapered way and draw it around on the crank as you turn it.

Aaaaand, it’s all likely to be a complete waste of time. There’s almost never anything wrong with the original rope seal. The leaks eventually prove to be caused by a bad PCV system – or sometimes come from elsewhere altogether.

Yes, I had a RMS leak when I first got my 1988 XJ-S two and a half years ago. Not too bad, but a nuisance (Bought an oil drip pan because of it!)

In the last two years, I’ve got my PCV System back to 100% working, changed the oil about 5 times, and have been running synthetic oil for 1 year now.

I see no indication of a leak from RMS anymore. Just took a look over the weekend. Dry!

I’ll agree that the rope seal is likely not the problem. As a update to my repair, I ran the engine(to temperature for 30 minutes) yesterday after replacing side seals and adding Anaerobic sealer to the top of the cap as well as the side seals(previous post). No more leaks.

edit… As a follow up if the seal is definitely bad and the engine is out of the car I would be hesitant to try to replace the seal with the crank installed. This mainly because the seal really needs to be sized and that can only be done with the crank removed.

Thanks for the responses - plenty of people on various forums over the years have replaced the rear main crank seal without lifting the crankshaft completely so it can be done - however it is not clear whether the timing gear has to be removed to allow enough clearance at the other end of the crank to do the job.

Thanks for all the responses - much appreciated.