Hi there, I am trying to find any input regarding the rear quarter windows on a 2001 XK8 convertible. Situation: While driving with the top in closed position the rear quarter windows open by itself most likely shortly after I open the driver’s side window. sometimes even without opening any window the rear windows open by itself and then stay open. When I push the convertible switch they won’t raise again only if I shut-off the engine and re-start or when I close the doors manual by key (like I would close the top). Strange…anyone encountered this problem already? Any input will be highly appreciated!
Thanks,
Torsten

Check your battery first is fully charged then check the roof micro switches are operating correctly.

Hi Jimbov8,
thank you for your fast reply and advise-its highly appreciated.
I have a fairly new battery installed, its fully charged (I use the Jag as a daily driver) and have already checked the micro-switches of the latch “top latch closed switch” & “Top ready to latch switch”. Also have checked on all relays and fuses which are related to the BPM-module. They are all ok and working. What I did not check so far is the “Top-raised & Top-down switch” . Do you know where they are located? I suspect them somewhere close to the hydraulic cylinders?

Fig 15.2 and it’s associated description of this manual will help you greatly.
http://www.jagrepair.com/images/AutoRepairPhotos/jagxk2001.pdf

I was going to post a schematic of the hood (top) control circuit but you now have the whole electrical guide.
Because both quarter windows are affected, I think you are in the right area with the BPM which, as you have realised has a section in it that controls the hood. When you operate the hood down switch, it puts a ground on pin 63 of the BPM multiway connector. One of the first things that happens is that the quarter windows go down but also the door windows drop slightly. You haven’t mentioned that that is happening so if it isn’t, I think that the problem lies on the output side or in the BPM itself (possible, but I would investigate other causes first).
On receipt of a ground on pin 63, the BPM puts a ground on the output side at pin 77. From there,this signal makes its way to quarterlight down relays. I note that this cable goes through two 18 way, yellow connectors, RH12 at the rear of the centre console and then through BT3 which is in the boot above the right hand wheel arch.
It may be that some wiring has chaffed through somewhere or some corrosion at one of the connectors, more likey the one in the boot, and you are getting an intermittent short to ground on this cable. In a way, it’s quite lucky that the wiring goes through these connectors because if you carefully back out the appropriate pin from the connector and hook up some form of test that you can see when you’re driving the car, it will help in tracking the fault down.
I note that you can’t raise the windows with the hood switch which suggests that the BPM thinks the windows are already up, again, pointing to the problem being on the output side. And, also, on locking the car I think the system will reset and that is why they do go up when you do this.

First of all thank you Eric for your detailed explanations! I will definitely go for that troubleshooting as outlined by you.
And yes I forgot to mention that the door windows drop slightly when I operate the hood down switch. Btw In the meantime I am not able to raise the quarter windows even with the key anymore. Another issue which has developed now the top does not latch anymore when I try to close it. The latch will stay up and will not slide into the corresponding hook on the frame of the top side. While looking at the schematic wiring layout it came to my attention that “Top Raised Switch” and the “Top ready to latch” switch also create an input into the BPM and without a signal from the “Top raised Switch” (i.e. malfunction of the switch) the latch won’t be triggered and the rear windows won’t go up… or am I on a wrong track? I don’t know yet where those 2 switches are located though I suspect them somewhere close to the hydraulic actuators however that would have been my next approach…
@ jimbov8: thank you so much for sending the schematic wiring - it is going to help alot.

Luckily, I’ve never had to get at them but other have reported microswitches on, I think, one of the rams. I think they have to be the hood position switches, raised and down.

Here is a description of the whole system which might help as it does begin to look like you may be missing some inputs from the microswitches. My original thinking was on the basis that everything else was normal.
501-11AM Convertible Top Electrical System.pdf (62.2 KB)

Eric, thank you so much for sending the system description. I am very impressed about the support I’m getting. It is highly appreciated! So far I have never experienced such a support in any forum!
I will go ahead and do the trouble-shooting as outlined and will update on any result.
Again, thank you for your support!

problem solved! I found that one of the connectors in the rear after coming out of the centre-console underneath the backseat was corroded and one of the pins was broken off. So I replaced the connector and everything came back to normal. I will post pics of the situation.
What I also discovered when taking the backseats out there must have been a harness issue previously-probably due to a charred wiring however the harness in the trunk has been replaced.
In the pictures you can still see the burned isolation which has been left. I thoroughly examined the whole harness and put new isolation-wrap. 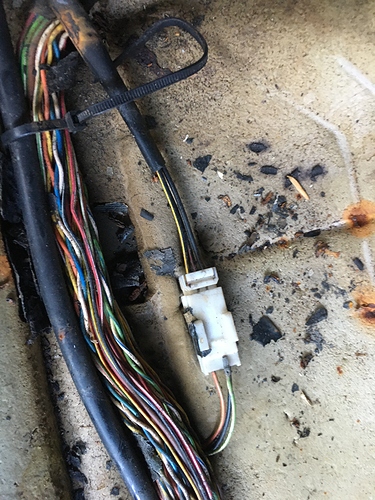 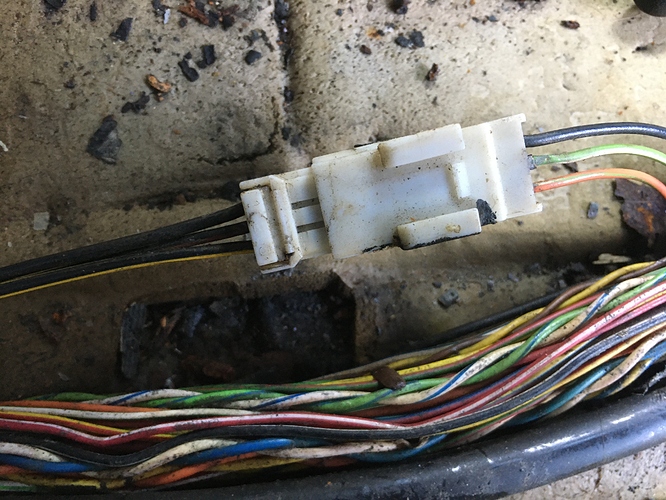 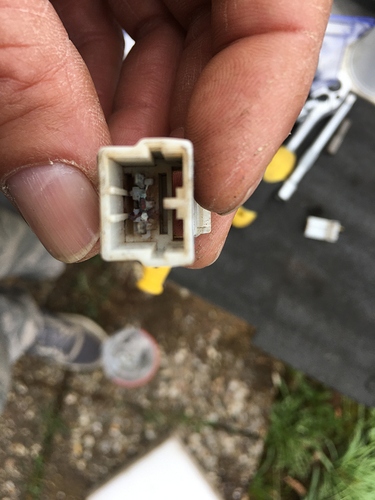