The IRS Discussion thread is too long for convenience, I’ll start a new thread regarding the hubs. Here’s the link to the previous thread:

Well I hope all of your got as big a laugh out of this as I did. I never knew this: Only two normal sizes. Big and small. My local parts store had them laying on the floor and just handed one to me with a big grin.

[New Snap Ring - A Perfect Fit] [New Snap Ring] And thank you anyway John. For all the crap I’ve been faced with on my Jag recently, it is a happy moment to have something easy! Now to just get the cap to go down a bit so it’ll go in the groove.

The IRS on my '63 FHC is complete up through the hubs where I ran into a problem with the left side splined yoke - the snap ring groove being ruined. 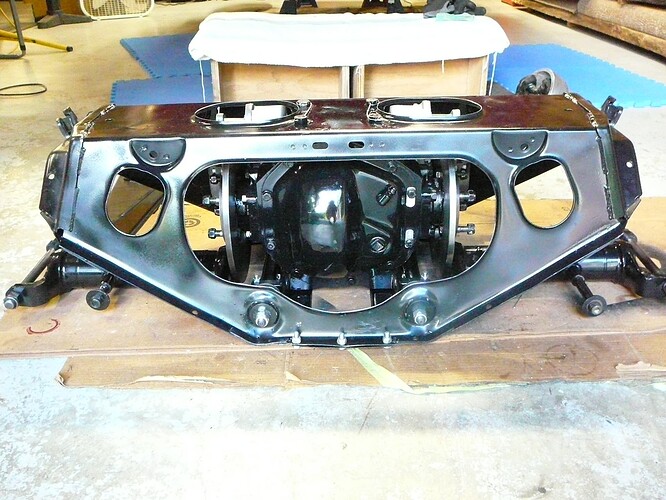 So far on the IRS the differential has been gone through with new output bearings and seals, the proper output flange bolts installed, and a bent pinion flange straightened and new pinion seal, new inner Fulcrum Shafts and seals and actually safety wired, safety wired on the top 4 differential bolts too that were totally missing, replaced one disc (that was for a different model having incorrectly located caliper bolt access holes), rebuilt calipers with refurbished original brake cylinders and pistons and green stuff pads, and I fixed the handbrake calipers. I’m probably going to add a remote bleed setup. I had planned to not redo the hubs as the bearing felt smooth and the end float was spot on. But with the ruined splined yoke. Well, you know, while you’re in there…

I found a used Splined Yoke through Jag-Lovers and I’m borrowing an extraction tool from another member. While waiting for those to arrive:

The bad snap ring groove on the left splined yoke. Hard to see in the pic but the snap ring groove is non-existent right where the circle is and the 90 deg edge on most of it is no longer square. 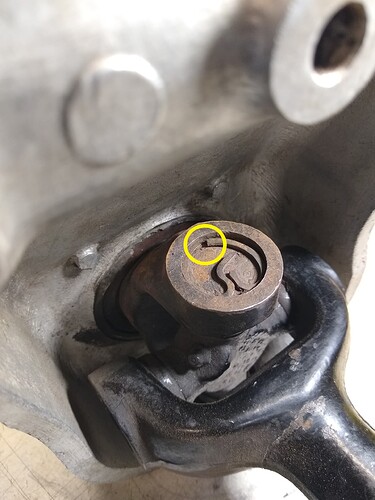 On the other side of that half shaft, the U-joint Flange had been cut by someone removing the stud. That is fixed now TIG welded. 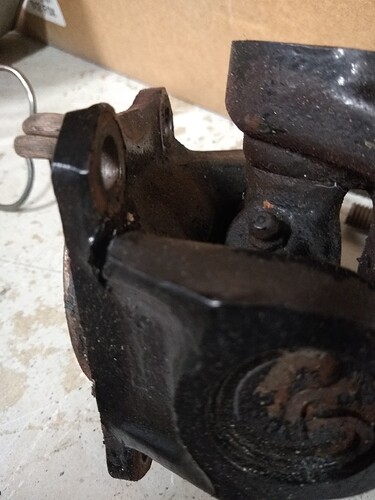 Here’s the Left side Half Shaft and Hub. The knife is marking where the cut was. 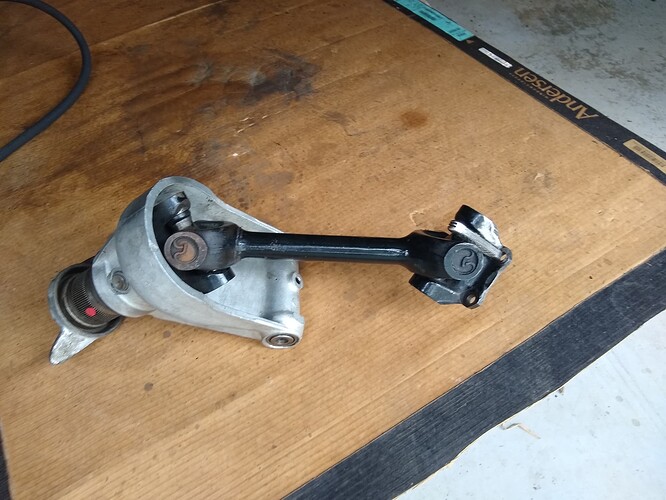 And here’s the Half Shaft in pieces. 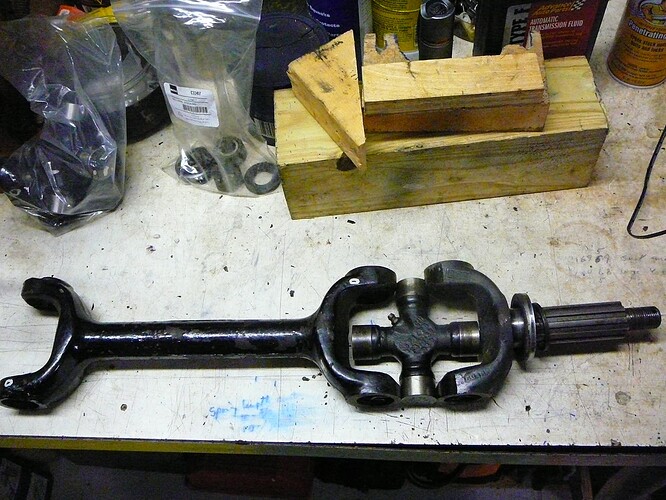 And the Hub. The Outer Fulcrum Shaft had rubber type of seals but the original Timken 03062 bearings and races are brinelled so they’ll be replaced. My vendor sent me felt seals, but I’ll be using rubber ones suggested by you-all. Most seem to suggest the National 471652 Oil Seal and that is correct, but I’ll use the SKF CR11124 suggested by @Aristides because it’s Double Lip. Finding that proper Timken bearing is turning out to be expensive, so I may choose otherwise. 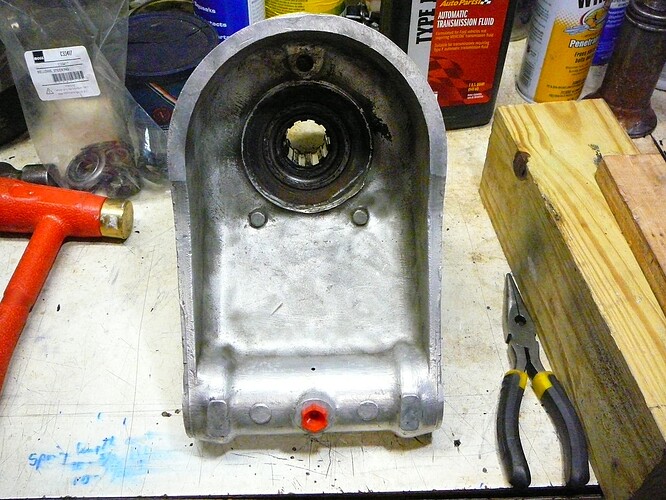 Dismantling the Hub was not such an onerous job. I used an air impact wrench to remove the large outer bolt; it had to work a bit, but it finally came loose. I then got a surprise because I moved to inside U-joint and while working to remove the Flange, the whole Haft Shaft came out of the Hub! A nice surprise. I thought the Extractor Tool from @rk62ots would be needed! I’ll still need it to set the shims. 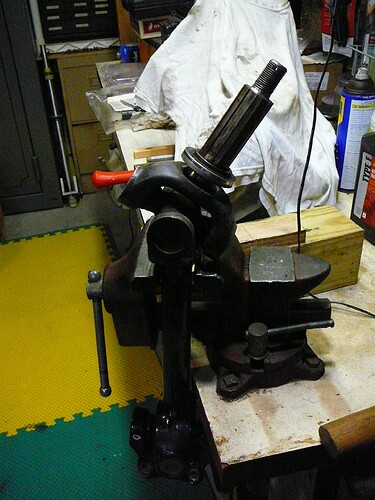 Removing the U-Joints was pretty straight forward; I just used the floor press and sockets to drive the cross to one side, remove the bearing cap, drive it to the other side and remove that cap. They needed some “encouragement” but no drama. With the Half Shaft dismantled, I removed the wheel Hub from the Hub Carrier. Also pretty straight forward on the press. I really like the air assist on this press, it makes getting the ram to the work piece very quick. At that point I switch to the hydraulic handle. My setup looks exactly like Rob (rk62ots) showed me. 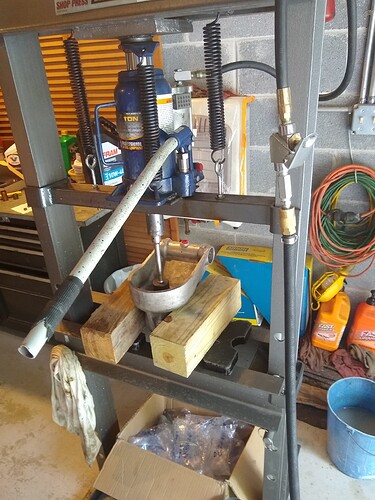 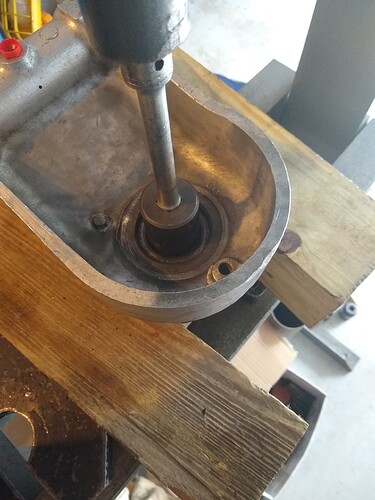 I keep that box of packing under the press to catch stuff…had to learn the hard way but this works pretty good.
With the wheel Hub free of the Hub Carrier I found some damage to the carrier near the inner seal. Something had hit it and smooshed the edge of the hole for the seal/bearing into the seal. I straightened it the best I could and it’ll be all right. 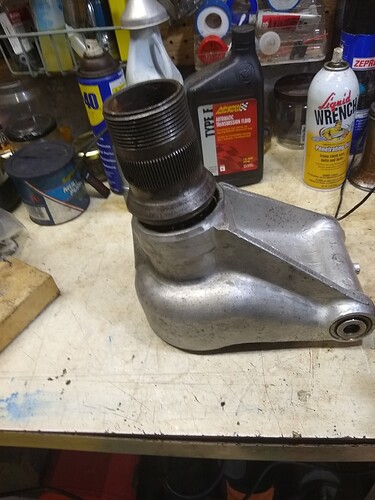 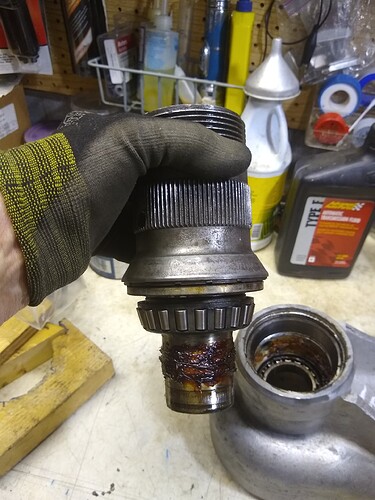 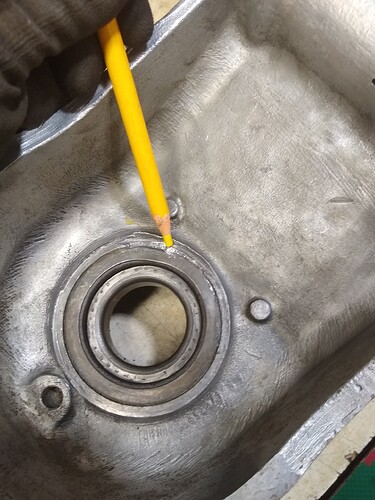 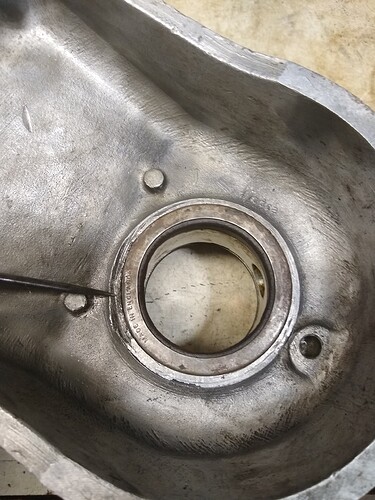 On inspection of the bearings and races, they look great. There are not marks on the races and the rollers all look perfect. I see no reason not to re-use these bearing. I’ll have to borrow a bearing extractor to remove the Outer Bearing just so the Outer Seal can be replaced. The Outers: 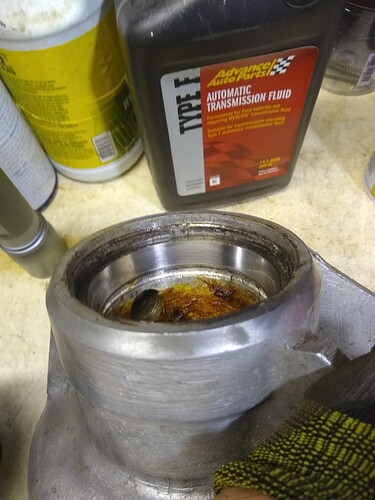 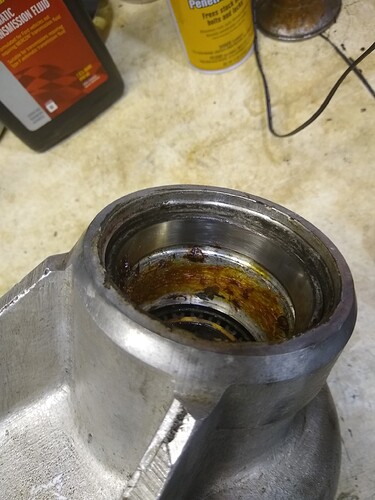 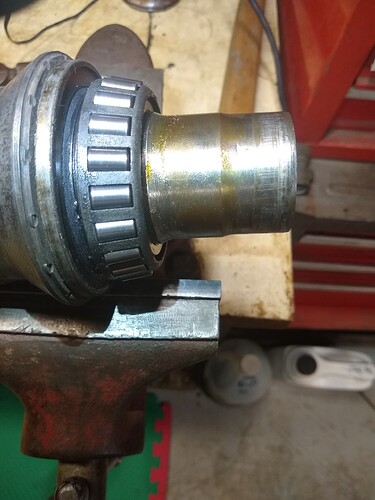 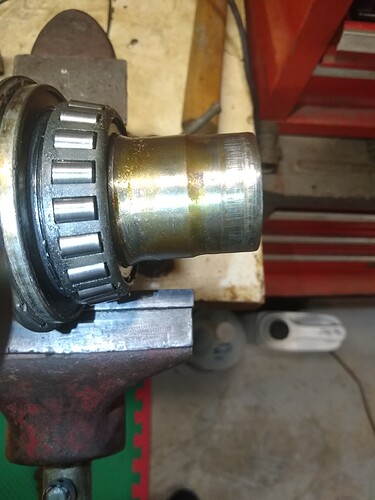 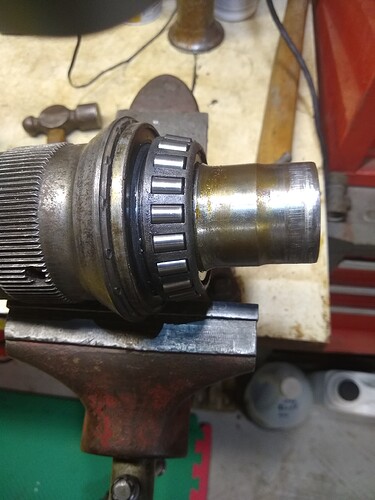 To get the inner seal out, I drove the Inner Bearing’s Outer Race out enough to pop the Inner Seal out.
The Inners: 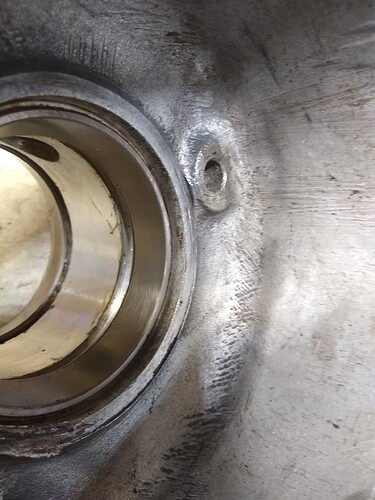 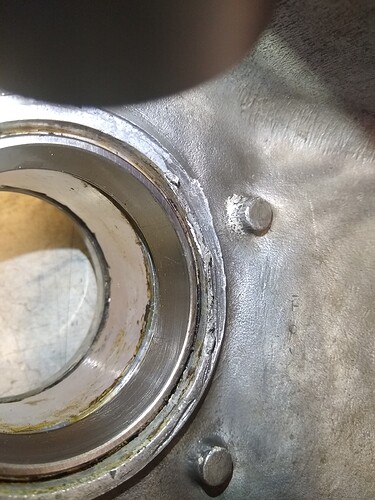 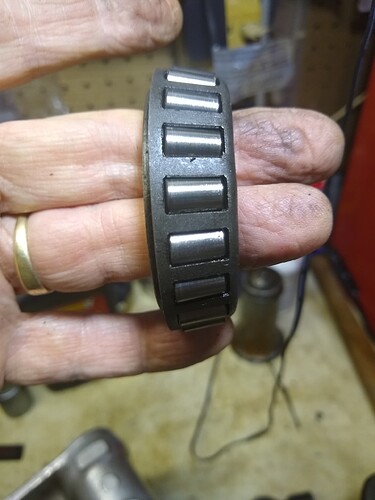 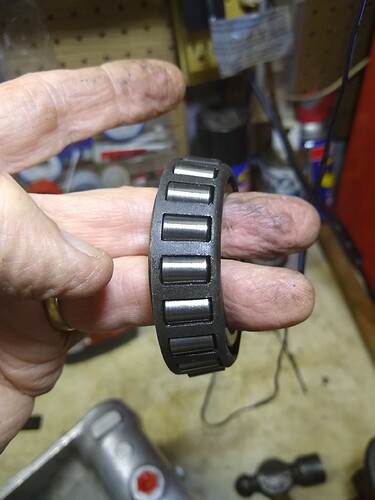 And that where things stand today. I’ll inspect the right side Hub/Half Shaft but have to take a break for family time.

Well I have a question. On U-Joints with the Zerk fitting, in which direction is the nipple to be facing? It would seem to me, if it has a direction, it should point towards the Half Shaft. The reason I ask is my left side axle has the Zirks pointing to the Half Shaft, but my right side axle has them pointing towards the Flanged Yoke and the Splined Yoke. 3 of the U-Joints are probably original being marked “G” that I believe stands for GMB. The odd one is that Spicer.
That said, I’m considering replacing them all with Sealed-for-Life such as the Spicer SPI-5-1410X. In that event, there will be no Zerk fitting. For the record, I measure across the Caps on the two I have out and they both measure 4.188".
Has there been a consolidation of opinion as to what U-Joint is preferred? @rk I’ve been reading your thread on the IRS and what was your choice. (I thought I saw it once, but can’t find it again.)

Scot, I used Spicer 5-160X which do have a zerk fitting. I honestly don’t know if one is better than the other but they have worked for me for almost 10,000 miles/2 years so far. Zerks should point toward the halfshaft otherwise you can’t use it when everything is installed.

I tried sealed for life and they did not last. I feel a little more confident of a long life if I can grease them on a regular basis

Scott, from a safety view point, could I suggest if you are doing anything involving rotating machinery (Lathe/drill press) that you consider removing the wedding ring? When I was working as a toolmaker that was always removed during the week as they are known to get snagged by swarf.

I tried sealed for life and they did not last.

To be fair Dennis, the lubrication system lasted for the life of the bearing.

Excellent depiction of your process: this will become a definite go m-to thread for people in the future.

Agreed: avulsion of a finger is oooogly.

Scot, you seem to be missing the water slingers. These go on the hub and keep water away from the seals. Early cars did not have them but your hubs have the marks where they were peened in place.

Oh…where to start. The jokes then.
Bill, perhaps it is Sealed-for-Laughs?

Rob I do hear that. My first inclination was to go with grease nipples. Then I’ve been reading, and reading. So now I am thoroughly confused. I will change out the grooved Outer Fulcrum bearings definitely as they are ruined. I equivocate on the wheel bearings and the U-joints. It is in my nature to be conservative - some of my stuff is still up in space - but I just hate throwing out the good. Oh jeepers! What to do?? Right now I lean towards keeping the wheel bearings and replacing all the U-joints.

And thank you Wiggles. In school I was the only engineering student who got an A in English. Now you unnerstan why I’m confused. And by the way, that particular finger is needed for an Ab13 flat 3rd!

Hi Dick. I was wondering about the dust covers or protection covers but you’re talking about the water slingers. I consider the “dust covers” because they may offer some degree of road debris protection? There are several dings of evidence where these axles have been hit. I wonder if they’ll fit my car. On the water slingers, I know where they go but I did not catch the peening marks. Actually I didn’t look for it because I thought my car 26Sep62 was too early to have them? What do you suggest? Should I add the slingers?

Then I’ve been reading, and reading. So now I am thoroughly confused.

Here is the question: exactly how many miles do you think you’re going to put on this vehicle?

Sealed for life U joints will easily go 50 to 60,000 miles, or more. If it makes you feel better, put grease nipples and keep them greased. Or, if you don’t like lying underneath the car, cleaning off greasy bits, put in the sealed ones.

Either way, I think you’ll be just fine.

Thanks Paul. And the answer is…not many miles and no planned trips in the rain. But, I live in the Smokey Mountains - it rains here. Point blank question: if you had a car with good feeling U-joints that were 60 years old, would you change them regardless of how good they “seem”.

Clearly my left hub has peening marks. But that hub is out of the Bub Carrier and the seal is down out of the way. The right hub is not so clear…maybe, maybe not. 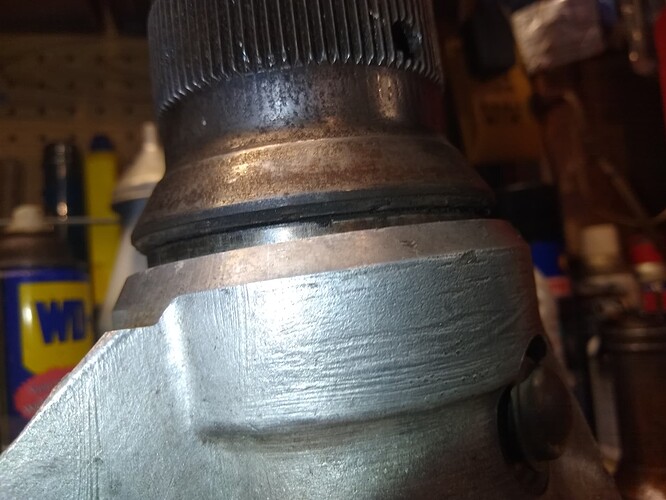 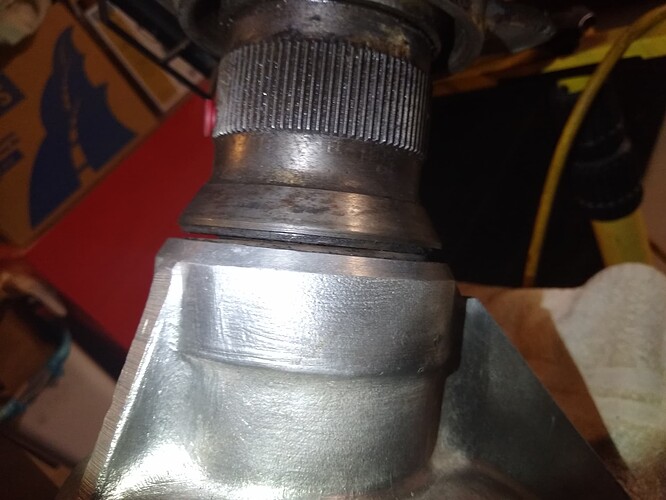 When it was all apart? Absolutely!

They are 60 years old… with an unknown history.

and how about the wheel bearings? Also 60 years old.

That would depend completely on how the rollers and races looked: if they were clean, not brinnelled, and not damaged, I’d just repack them and put them in.

…if you had a car with good feeling U-joints that were 60 years old, would you change them regardless of how good they “seem”.

OTOH, I also didn’t change the bearings and had to go back and do one side 20,000 miles later (though it wasn’t really much extra work to do later).

I suppose it’s a matter of whether you feel lucky. Well do ya?

Thanks Paul. The left side bearing looks in very nice shape. No imperfections on the rollers, but I’ll check closer a 3rd time. The outer races of the inner and outer bearings looks unmarked. If it was on my Chevy I’d re-use them in a heartbeat. But on the Jag that is in a different league in level of difficulty to change them, well maybe that’s not smart.

Or, as George says, maybe I don’t feel lucky. Here’s my thought: not all components made today are as good as back then (like the IRS/body mounts). But bearings are probably better today than yesteryear if you buy good premium bearings; the equipment used to grind the rollers is extremely accurate and controller by computer. I suppose that goes for U-Joints as well. So I think that, despite my own reticence, the smart move is to replace everything. It isn’t the money at this stage of the game, it’s the mitigation of the risk and it’s the quality of the end product. Hey?

Back in the day, I worked at the Ford assembly plant at Petone, NZ. One of my workmates was trying to start a recalcitrant Falcon by shorting the contacts on the starter motor; wedding got involved and melted to his finger . Urgg! Later, at a different job, a colleague was showing off doing chin ups hanging from an equipment rack about 2.8 m high. Wedding ring got caught on an upstanding threaded rod on dismount. Luckily there were people on hand to lift him free.