I’m 99% sure I’ll be bringing a particular 120SE OTS home by the end of the month. I’m told except for a 60’s paint job and the usual ding and and dents it’s an untouched car, matching numbers throughout.

Can you recommend a few more?

XK120 Explored Viart/Payne,: the Factory Service Manual-many on ebay is a must, the Spare Parts Catalog, the XK120-14-150 parts catalog free from XKs which has parts diagrams of nearly all parts, a parts catalogs from any other suppliers…Broadsport UK, and also on ebay. ESSENTIAL to have is a set of the factory Technical Service Bulletins that update the Service Manual info, very important as the SB for example may inform of say, a new valve, that requires a new valve guide, spring, keeper…etc, Many important updates to the Factory Service Manual that you would otherwise not know about. The ultimate nice to have is:.,.Jaguar XK120 The Anatomy of a Cult Object, Urs Schmid Vol 1 is mechanical…maybe one to have first, Vol 2 more interior etc, and maybe most important…you have found this forum. Once you have it,please let us know details and data plate info #s.
Nick

Just don’t waste your $$ on the JCNA guide by Sheridan.

Data plates. Seller says they match the numbers on the car. I think around a March, 1954 build. OTS, originally one of the greens with a green gut now dyed white. …yea, I know.

If it is as good as it sounds, this will make a really nice restored example. I’ve been looking forward to owning one of these since I was 9, when I had a ride in one. Pretty sure that was my first ride in a car that smelled of leather. 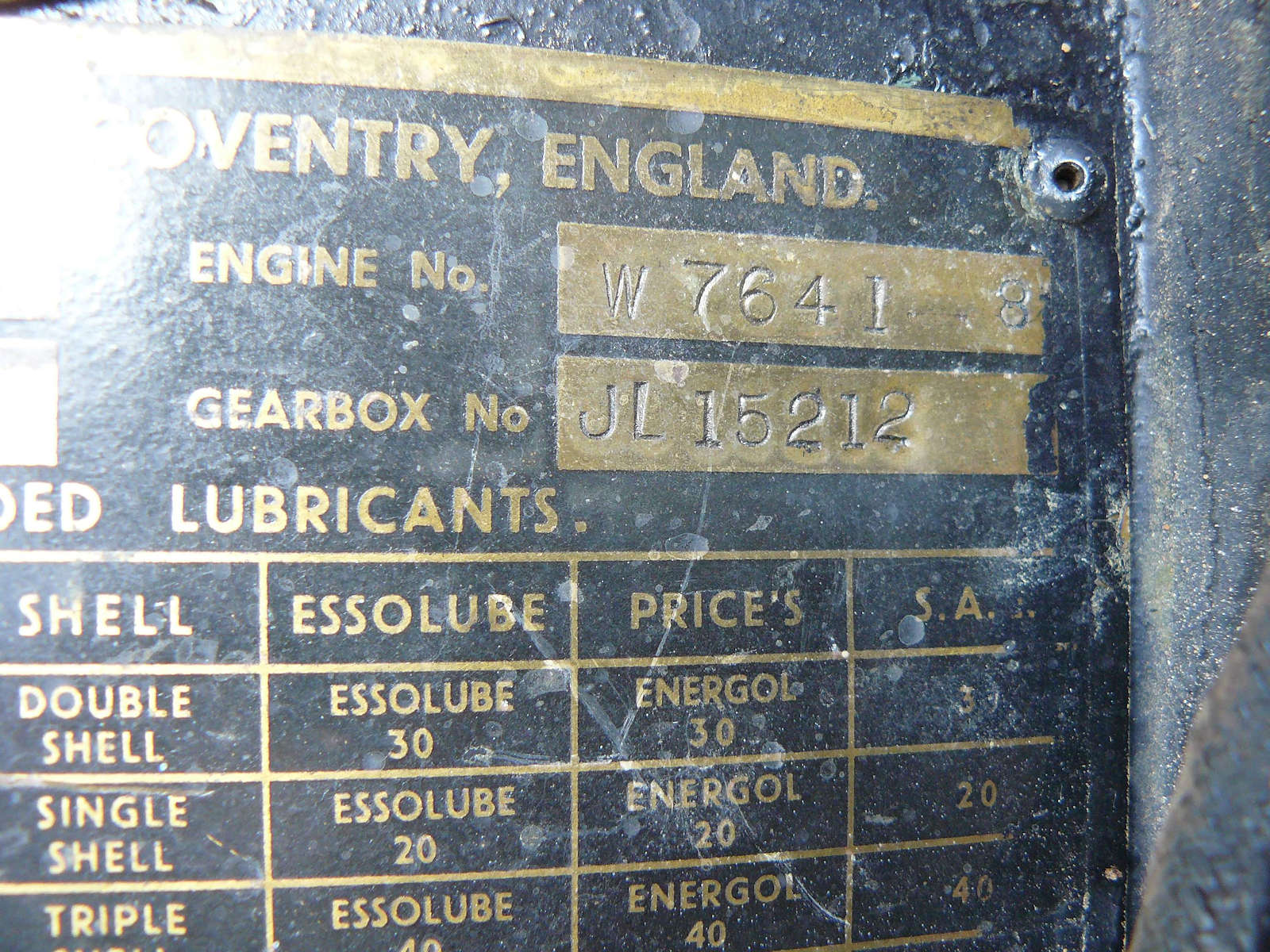 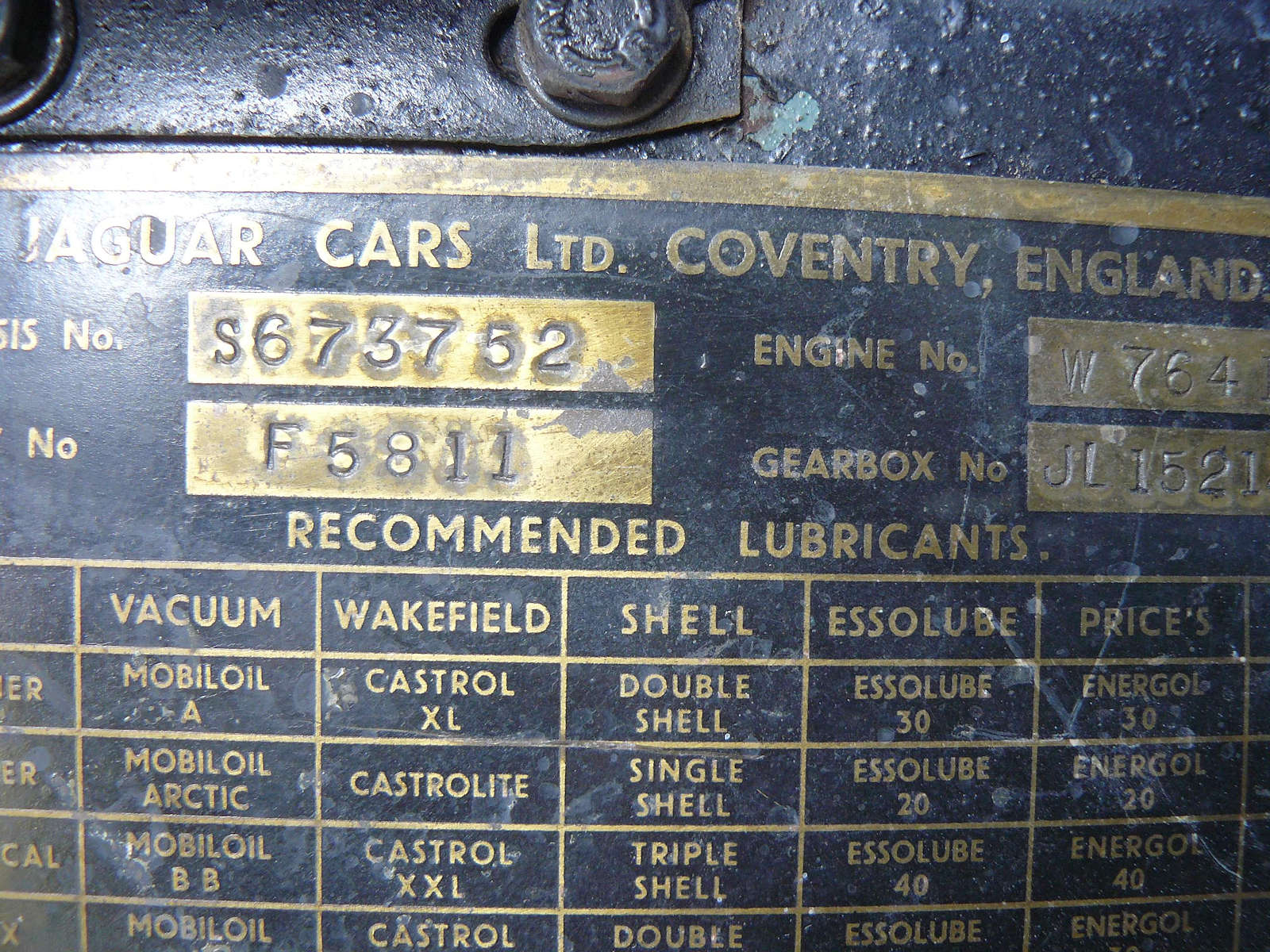 certainly the 2 most essential items are “XK120 explored” by Viart new revised edition available late November and the Spare Parts Catalog latest edition. A copy of Urs Scmidt books Vol 1 and 2 are also very good along with the latest version of Philip Porters “Original jaguar XK”

the data plate indicates likely a March 1953…early March or late Feb. The S indicates it should have wire wheels, more leafs in the rear springs, a stiffer front sway bar, hi hi lift cam, and would have had dual exhaust,. The final -8 means 8-1 compression ratio, OK,.so you will find the eniine no on the flat just above the oil filter…lower rith under carbs…may have to rub off some dirt. You may find the S673752 on the frame flat just ahead of the tandem master brake cylinder, and on the front cross frame flat just in front of the radiator…these numbers are usually quite faint…but there, I have S673776, W79028-S…March 19.,1953…so hi there brother car…maybe on the assy line on the same day,.
Nick

oh and don’t do anything…not start it, nothing…til you consult this forum…really.
ask lotsa questions…100s of years of experience with XK120s…on this forum. A short column by a noted sports car writer was…when the future drove down Elm street…same with me when I saw my first XK120…the future was set in stone then, 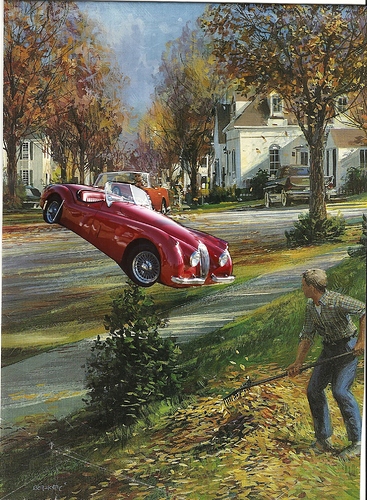 One of our club members (I’m the president of the British Car Club of Western North Carolina) has a specimen 120 OTS. A national 1st winner a few years in a row and within an easy drive of the house. So, I’ll have a handy reference close at hand.

He’s got a proper set of tools, and a set of fitted luggage. He’s one of those guys.

Nick… were they falling out of the trees when you were younger? Yep, our cars are so close, 24 away, would certainly have been on the same boat.

be careful! just because it wins. .doesn’t make it right… it just makes it better than all the others on that day… maybe…before you get too excited about the tools you may want to read Roger Payne’s excellent research paper on them… As for fitted luggage… well… they did make it… but it is VERY rare… and not what you might expect… Now if you had told me he had the original minor replacement outfit… and showed me a photo of it… then… well… I might … get excited… 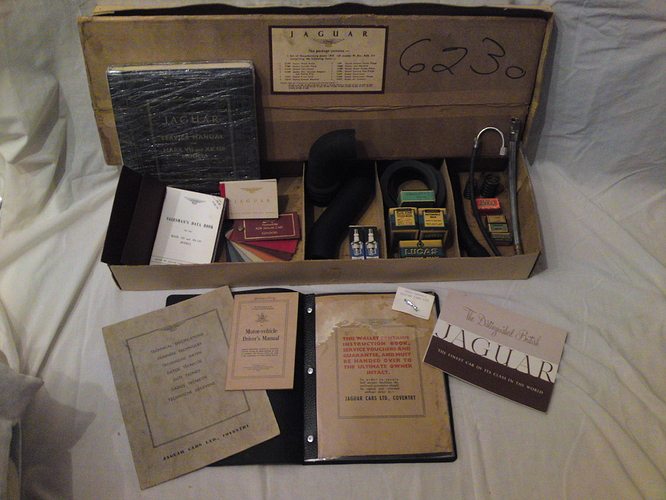 If you are looking for restoration guides, Porter’s 1st edition was the earliest serious attempt but had a lot of mistakes, 2nd edition fewer, 3rd edition getting closer. Schmid has a few mistakes. Viart has more, but his pictures are really good. Even the factory Spare Parts Catalogue has quite a few, I think 62 last time I counted.
The difficulty with the 120 is there were so many changes throughout the production run, some well recorded by the factory, some poorly or incorrectly, some not at all. Many cars received modifications at the factory, or dealers, or speed shops, or local garages. The interest in and pursuit of original authenticity only began to gain momentum in the 90s with Porter. Completely untouched unrestored original cars are rare, and each only represents a brief period glimpse out of the six years production.
Another that wasn’t mentioned is Jaguar XK120 in Detail by AD Clausager, some production records including colors and shipping to dealers, and a lot of interesting history.
The JCNA Judging Guide benefits from one aspect neglected by the others, a principle particularly recognized in scientific research, that is peer review and revision before publication. I was on the review panel. It is not intended as a bolt & nut restoration guide, it is for judging the visible things, such as which cars should have chrome sidelights vs which cars had painted pods, which cars had black engine and luggage compartments vs body color, which had glass brake fluid reservoir vs steel, how to recognize an original color scheme and upholstery pattern vs a California custom job, even variations in the brass data plate and errors in reproductions and restampings.
Going back a few decades and covering more history and less about restoration, there is Jaguar XK by Chris Harvey, Jaguar XK Series by Jeremy Boyce, Jaguar XKs by Paul Skilleter.
Before the internet, it was often very difficult to find answers to the simplest things. I looked for 2 years to find an example of the early gearbox mounting shelf, 10 years to find the explanation of the junction box on my scuttle, 20 years to find a correct map drawer to copy (mine is the 2nd of 3 versions). One of the features of this forum from the beginning is that it has always been about accurate information. What you do with the information is entirely up to you.
Of course this level of detailed research isn’t everybody’s cup of tea.
Some people say just drive it and have fun with it, as the original owners did.
My brother the Porsche 928 owner looks at my book collection, shakes his head sadly and says, “You are turning into Corvette people, and the 356 people are closing in on you.”

I hear every word, Rob. There is value in finding the correct and obvious parts if possible and getting close is sometimes all we can get.

I know of a mid-60’s Corvette that’s been stalled on jack stands for years. The owner got so bound up on originality he contracted a lethal case of brain-freeze much to the detriment of his prized possession. It’s too bad when that happens. They’re cars for Pete’s sake.

Having said that, I do intend to study-up so I can tell whether the rear view mirror, etc., is correct and whether the seats get 9 pleats or 10.

and how many vanes in the grille., which way the little red lite indicators face on top of front parking lite, (mistakes in some books).as an example. Nick 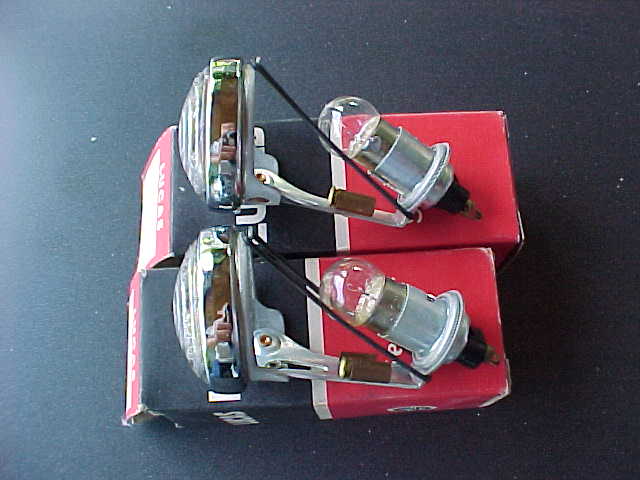 The lubrication plate appears to be riveted on vs screws. I don’t think that is correct. This isn’t meant to be a concours type criticism but if the car is untouched I wonder why.

the late cars had rivets securing the data plates

but if the car is untouched I wonder why.

It was a CA car til 1965 when it went to New Mexico. In 1970 the owner raced in NASCAR and shoved the old Jag to the back of the garage. The current owner is tight with a well-known race car family and heard of the car through that connection and bought it. He has 3 other cars to restore and suffered a nerve injury in his arm which makes it hard for him to do any intense work. So, he’s selling it. It’s far from pristine, but from all the photos it appears not to have been screwed around with except for a paint job in the 60’s. I’d love to examine the engine and see original pistons and bearings!!!

It already beats the crap out of a Fiberglass patched Bondo Betty 140 I’ve got my eye on.

I’ll have a look at it in a few weeks.

I believe all post-war cars had the data plate attached by pop rivets, likewise the body number tag. Before the invention of pop rivets, it was bifurcated rivets.

If it has not been started in years pull all plugs ,add a bit of marvel oil, and squirts of a light oil, ,.and …see if the engine will turn…pushed in 4th gear,.,I’m all for the 120…it is a S…wire wheel, and little bitty bumpers etc…there may be a ta on the diff to tell the ratio,can also tell by the speedometer #,or simply jack the rear and count diff revs/ to tire revs, hope you scoop it up, Nick