I have an 87 jag xj6 with a Lucas Lucifer issue on a relay. The relay problem is the large black tubular relay on the drivers left of the steering column. The top has white print with “Lucas UK”. Four wires. If I leave the car the car sitting without the ignition or anything else on, the relay gets very warm (almost hot) and the battery will discharge if left connected overnight. What is the purpose of this relay and what is it called so I can replace it?? I tested the relay socket: hot to brown wire and to white-pink wire… That line has a fuse (one of those in-line fuses). When I remove the fuse. both in and out lines are hot (I traced the line to the fuse, which is under the left console ashtray. Any ideas what’s causing this if not a faulty relay??

First. in order to locste the device, it would hep if the car is RHD or LHD.

And, anyone dealing with these cars is flyoing blind sans the s57 jaguar scehematic.

IN most UK cars, brown wires are always bttery hot.

disconnect the brown from the rea. See what does not work. if my guess is on track, the engne will not crank.

Ignition protection relay, saves the ignition switch from the current for all the accessories, just swap it against any relay with the same pins. Google BS-AU7 for all the wiring colours. White-pink is the radio (edit, all the other accs too I guess!), and that has a fuse. There should be more accessories like windows AC etc.

Four wires. If I leave the car the car sitting without the ignition or anything else on, the relay gets very warm (almost hot) and the battery will discharge if left connected overnight. What is the purpose of this relay

**
Which colors, Robert - and this may be xj40, ‘87’ was the changeover year. As for function; just unplug the relay- and see what no longer operates…

It’s an Ignition protection relay as David said, officially called the Load Relay, and it turns on all the accessories.
Any generic SPST or SPDT relay will do.
Check if the White/Pink cable at terminal 86 of the relay is switched on and off by the ignition switch.
85 is ground (Black)
The Brown cable on 30/51 is Battery feed
87 goes to the fuse box 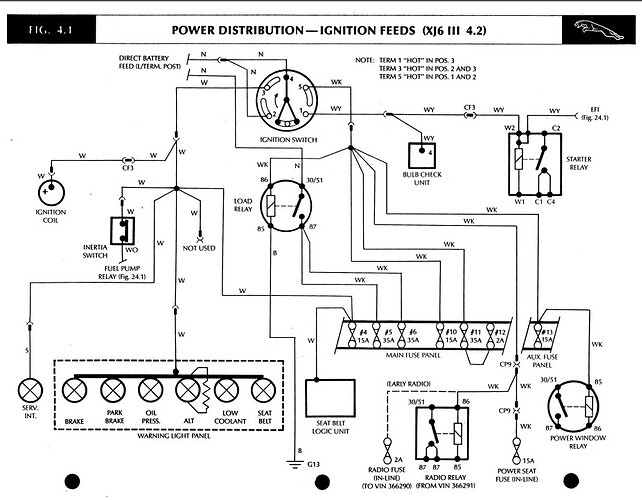 Aristides,
Thanks for the info and the wiring diagram…both very useful !! You mentioned I should check the 86 relay terminal (white/pink)that should go on and off with the ignition switch. It stays hot all the time, and (I think I said before the relay gets hot and drains the battery in 24hrs). But then for no apparent reason it when off and on with the ignition switch, as you suggested. Then later in the day it returned to constant on?? Am I right to suspect the ignition switch?
Also, I found a small gauge wht/pink wire in the center console running along the tunnel under the left ashtray. It had an online fuse (not blown); when I removed the fuse and tested both sides of the wire, they were both hot…I never experienced anything like this in my 14 years working on this car!!! Any thoughts?

Thanks again. Your knowledge about these cars is amazing and your replies
are always clear and very informative!!

Am I right to suspect the ignition switch?

**
You sure are, Robert; the ignition protection relay ‘substitutes’ for powering some high current items directly from the ign switch by connecting these items to the brown, constant battery power - reducing load on the switch. The white/pink circuit also serves other items that only works with ign ‘on’ - like the direction indicators - and (normally) the radio, and the cigar lighter, which both has in-line fuses. The cigar lighter, when removed, can neither draw nor deliver power…

an online fuse (not blown); when I removed the fuse and tested both sides of the wire, they were both hot

This should be impossible; the white/yellow is only supposed to be powered by the ign switch ‘on’ - there should only be power on one of the fuse connections. If both; this implies another power input - which then would power all items on the white/yellow via the ign switch when ign is ‘off’. You better retest fuse holder with a test lamp to make sure of this - a voltmeter may indicate voltage even when there is no power. Also;

white/yellow is only supposed to be powered by the ign switch ‘on’ - there should only be power on one of the fuse connections. If both; this implies another power input - which then would power all items on the white/yellow

**
Must have had a senior moment, everybody; read white/pink - the white/yellow is of course only powered in ‘crank’…

Yes, that makes more sense to me…at 77 and still crawling around under an old Jag on the garage floor, I’m very familiar with “senior moments”. But I’ll never give up on the old girl.

In fact, I have had moments when turn signals, radio, etc. have worked with key in “off”. But just to complicate things, there have been times when they only work in the “on” as they should. I have tested the relay socket and the fault happens when there’s power to the pink/white terminal, which seems also to point to the ignition switch, so the old bugger comes out tomorrow !!

Hope I am not too late. Work on the setvch over a good sized an. litte dtuff gets lost fast.