Some may recall my 2017 thread concerning having stainless steel bumpers made locally in Liverpool to replace rusted out originals. New replacements were then and continue to be unavailable from Jaguar. And no-one had considered remanufacture of the originals which are complex items built-up items from a large number of metal, rubber and plastic parts. The basic problem is that the main mild steel beam rots out and at the rear, the side extensions can also detach and fall off, both problems virtually impossible to fix. Even in 2017 stocks of sound used replacements from scrapyards were drying up. The problem tends to be worse at the rear where mud thrown up from the road hastens the rot. So I back in 2017 I built some wooden mock-up bumpers and had them made by a local engineering firm. The were pretty basic but we’re beautifully made in 1.5 mm stainless steel, looked really good and were very strong and durable and have lasted well. I cannot imagine that the problem has got any better. So to stop any XJ40’s being scrapped in 2021 just for the want of rusted out bumpers, I thought it time to further develop the idea. I am now in discussion with a major supplier of new and remanufactured parts for classic Jaguars. We are looking into the feasibility of developing these bumpers into direct replacements for the originals. Our aim would be for single-piece stainless steel bumpers, front and rear, matching the overall profile of the originals and including the wrap-around end extensions. Probably of lower height than my prototypes and with apertures to accept the original Jaguar lights, in UK side plus indicator front, fog warning at rear. And it would be relatively simple to offer the option of full or partial rubber facing if desired. We would need an enthusiast with an original car for the re-design, preferably someone based in North West England. Then guage demand for the replacements - the supplier in question operates globally.
Feel free to express an interest.
All the best and keep safe.
Clive

Here are some photos of my original 2017 bumpers still fitted to the car. Restoring the side pieces at the rear would be part of the revised design, also building in the lights again. 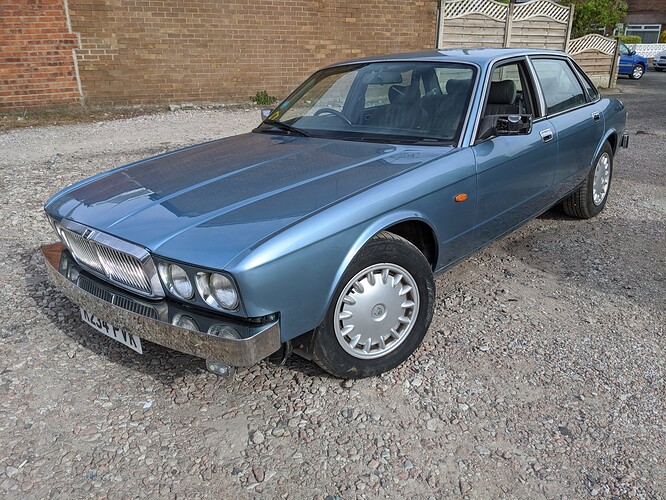 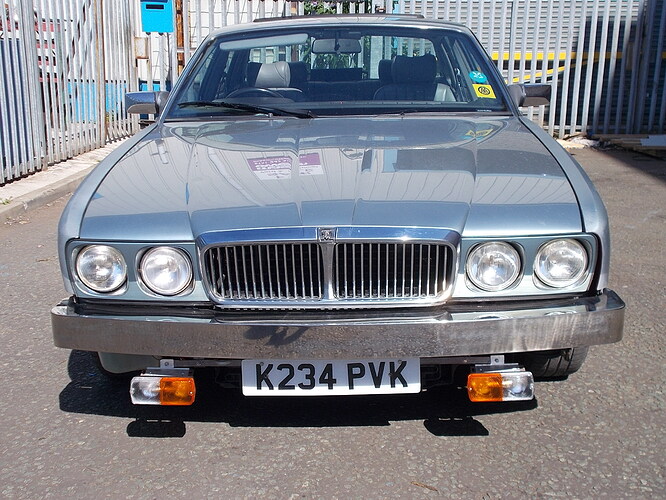 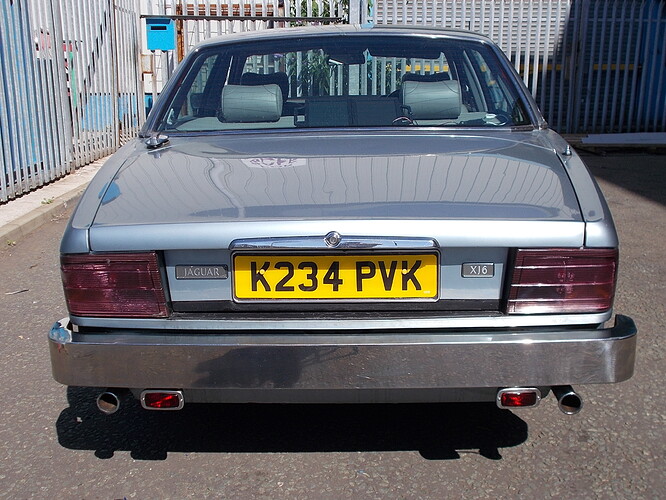 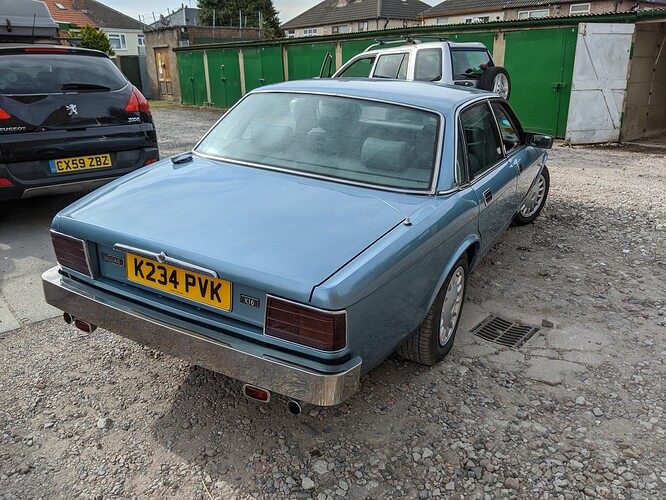 Taking the bumpers off for painting recently gave me the chance to take photos of their internal structure. The way they were made was first the shape of the upper and lower plates (which are identical in this design) was taken off the plywood buck. This buck was a full-size wooden model to establish the bumpers shape. It also very accurately located the two fixing points of the bumpers onto the original Jaguar bumper fixing brackets. The new bumpers use the original M12 fixing bolts into welded captive nuts - final accuracy here better than +/- 1mm. You will see in the photo semicircular cut outs in the underside of the bumpers for wrench access for very quick and easy installation.

The shape of the plywood upper and lower plates was then laser cut in 1.5 mm stainless steel plate. The upper and lower plates were then joined using square section s/s tube struts. Finally the filler plate forming the front of the the bumper was gradually welded in assuming its curve matching that of the car body. So both bumpers are effectively very strong stainless steel beams. 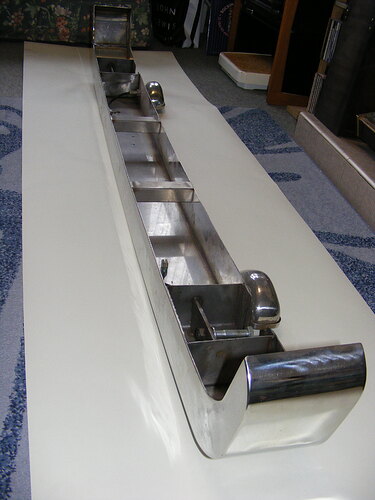 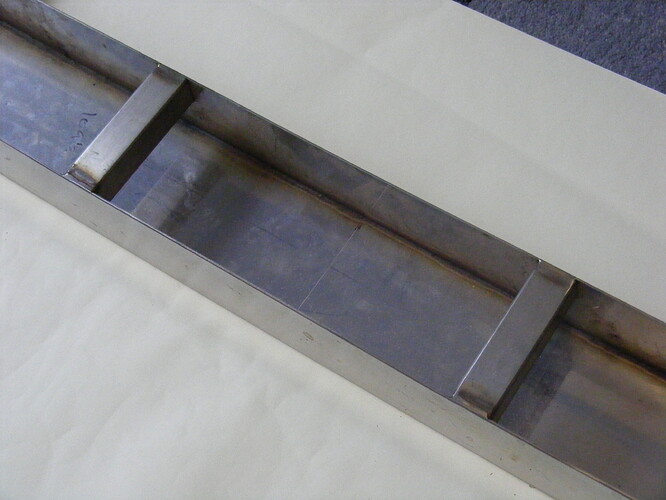 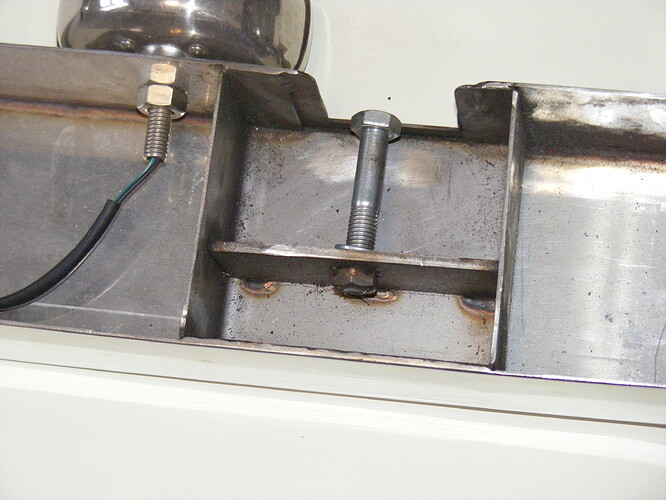 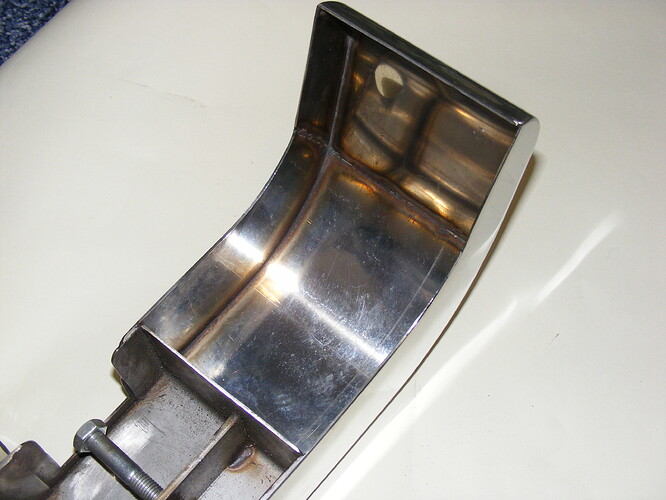 All fabrication and welding of the new bumpers done to a very high standard by Leeming & Murphy, Bootle, Mersesyside, UK:-

Well, interesting idea…but Im not sure with the result… IMHO looks weird on the car, well see the further development, if you could go as close to the original as possible. Im also not sure, it will pas MOT, at least where I live…
My opinion is, that if you fabricate original steel parts of the bumper, there will be much more interested persons…I know at least about one at this moment…

Hello Marek and thanks for your contribution. In the UK modifications like this are allowed to used vehicles and the car had passed annual MOT’s without comment. An example is the hundreds of MGB’s and Midgets that have had their impact absorbing US spec 4mph polyurethane bumpers replaced with the earlier chrome plated steel versions. As to insurance, I sent a letter to my insurers saying that my old bumpers were unserviceable but were no longer available new. So I was having some made locally. I received a letter in reply saying it would not affect my premium and I have kept the letter in the car file.

The shape is a bit “Mad Max”! I agree! I confess that I had the massive chrome bumpers found on US 1970’s muscle cars in mind.The bumpers are 100mm/4" high and reducing to 75mm/3" would help here. The Mk 2 bumpers would match the profile of the originals - I would buy original items to copy, they are still reasonably easy to get from scrapyards here in the UK. You mention steel parts. The steel bumper beams are still available new from Jaguar, front BEC24868 £339, rear BEC24870 £572 ( prices include UK VAT.) But dismantling and then rebuilding the bumpers would not be easy and the beams are mild steel and would probably need to be galvanised before fitting to prolong life.Whereas the one-piece stainless items would last the life of the car and are easily repairable in the case impact damage etc.

Making a general point here. Personally I am totally against modifying mint, original classic vehicles. For example, in 2008 I bought a totally original 1994 Range Rovers Classic “soft dash” for £1750. This was at a time when old Mk 1 Range Rovers were low in value and were being scrapped in huge numbers. I kept it totally standard and well maintained, selling it into a private collection in 2018 for £11k. But 2008 was also the year that I had bought my present XJ40 3.2 base model, a high-mileage, tired example for just £750. It had a very nice interior and I have kept it well maintained. It eventually needed a new windscreen panel, new front wings, welding to A posts and to front end of sills. Last year it got a full high-quality re-spray. So all done and now she is all solid steel, looking great (as you can see) with a very sweet AJ6 engine. Never likely to be of very high value but lovely to drive and enjoy.

Hi Larry,
I checked the part numbers for the “Bumper Beams,” the mild steel box sections at the cores of the bumpers (the structural bits that can rot out) and these are the same for both UK and Canada/US cars (BEC24868/24870). Both UK and North American cars do have stainless steel “bumper blades” that are visible on the top of the bumpers but these are mainly decorative.

Mine, and my mates cars of various years and trim levels have aluminum beam bumpers, not seen a steel one here.

It helps to have a schematic and this is the one for the rear bumper from the Jaguar Classic Parts website. The main bits are the beam item 4 and the rubber cover 5. The stainless steel blade is item 2. 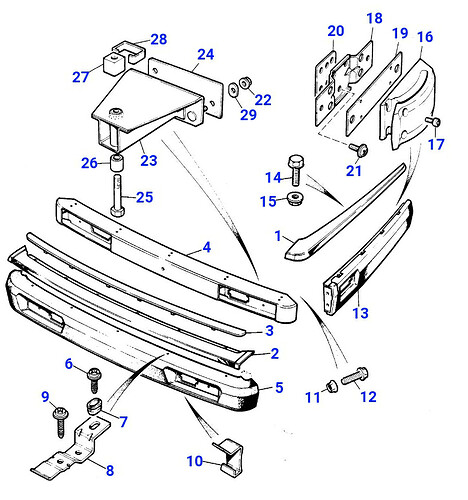 Excellent substitute for a 4x4 or truck.

Agreed! I always liked this look 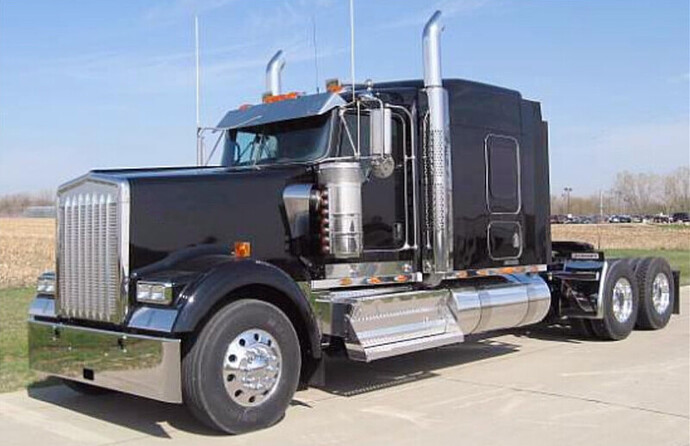 On my car, item #4 in your illustration is made from welded aluminum. I’ve replaced the rubber section (5) and had the both front and rear bumpers apart.
I know that the aluminum beam is available in the UK, but like yours, a lot of 40’s over there start out with the steel version. Too bad.

First I have to applaud the workmanship and creativity you’ve displayed in your retro bumpers. Obviously a lot of good work there.

At the risk of offending all the XJ-40 purist out there I envision a little more tucked in and less clunky version of the stock bumpers. So each to his own. While my wife is getting dinner ready I decided to do a quick (and very poor) photoshop version of my idea … I apologize in advance 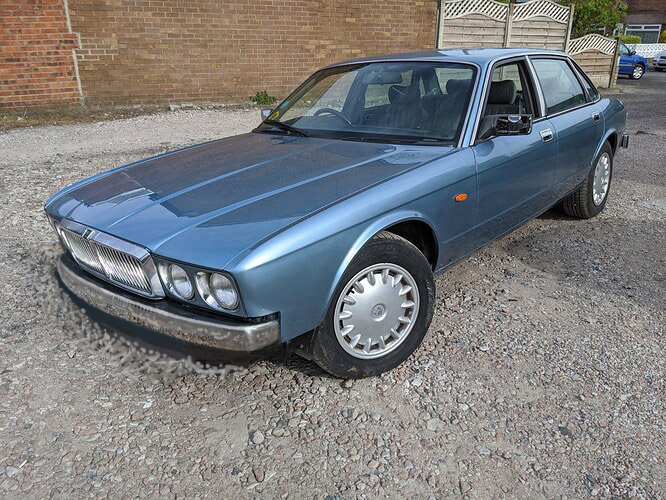 Hi,
Nice work there - you have given a good impression of how a slimmer “Mk 2” 75mm/3" height version might look. Add to this side extensions and some rubber facing strips and you would have a reasonable visual fit to originals.

In case you are interested, here is a link to the original 2017 xj40.com thread. The forum is UK based where most surviving XJ40’s live and where bumper corrosion may well at its worst. I have just replied to another UK owner Aidan also considering making replacements:-

Thank you, everyone, for your contributions.
This whole topic boils down to the ongoing struggle to save remaining XJ40’s from being scrapped at a time when their values are so low. I am certain that one day this great looking car, the very last Jaguar design to be personally signed off by Sir William Lyons himself, will be properly appreciated with monetary values to match. Commissioning of vital replacement parts will then become economically viable. In the meantime it is for enthusiasts like us to keep this fine British model alive.
Best wishes to you all and keep safe,
Clive